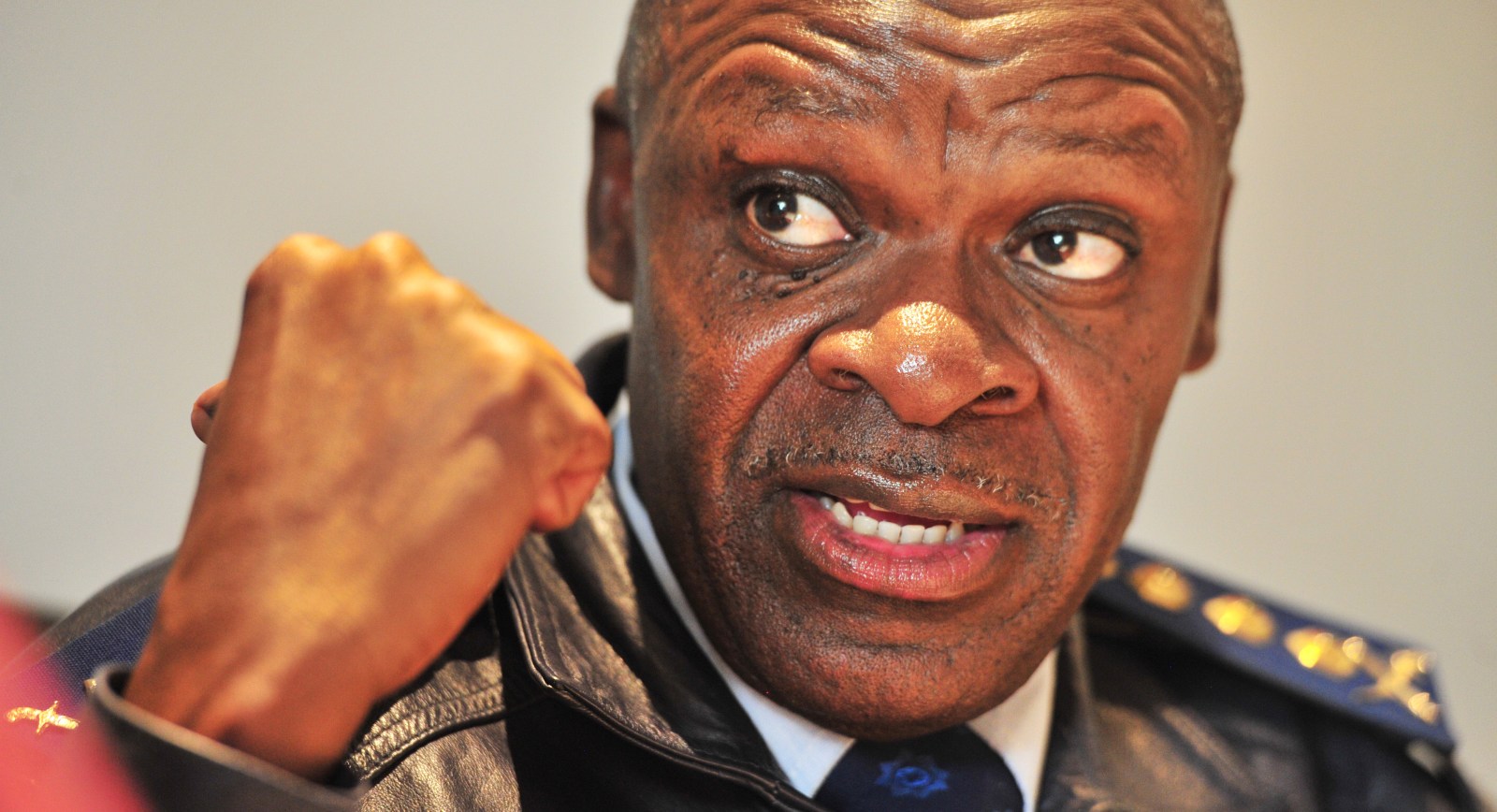 National police commissioner General Khehla Sitole during an interview about the fight against crime after the release of crime statistics on September 15, 2018 in Johannesburg, South Africa. (Photo by Gallo Images / City Press / Leon Sadiki)

The SAPS received a qualified audit opinion for the 2017/18 financial year due to irregular expenditure arising from procurement policy violations, and insufficient details on its immovable assets. The auditor-general said irregular expenditure had been understated by R968-million, but the full extent could not be determined as circumstances were “not adequately and completely disclosed”. The SAPS annual report tabled in Parliament on Thursday also raises questions about other claims, such as performance achievements and convictions obtained.

That all’s not well in SAPS supply chain management has been in the public eye for some time. Parliament’s public spending watchdog, the Standing Committee on Public Accounts (Scopa), since late 2017 has scrutinised various procurement deals. Central emerged Forensic Data Analysts (FDA), headed by former policeman Keith Keating, which since 2010 had clinched contracts worth R5.1-billion, including for the SAPS property and exhibit management and firearms permit, and IT also involving government’s State Information Technology Agency (SITA).

In early 2018 the FDA threatened, ultimately unsuccessfully, to shut down the SAPS systems in a pay dispute that emerged when police management suspended the contracts in the wake of the previous Scopa hearing that pointed out these contracts were not above board.

By then Scopa and investigations by the Independent Police Investigative Directorate (Ipid) had highlighted how Keating cultivated relationships, including a 2011 trip by two SAPS IT staffers to Old Trafford and with Lieutenant-General Khomotso Phahlane, the former acting SAPS national commissioner returned to his original post at the police laboratories to be immediately suspended from there in mid-2017. Coincidentally, his former laboratory colleague Adeline Shezi, the lieutenant-general who went on to head SAPS technology management services (TMS), also came under Ipid scrutiny in April 2018 for alleged corruption over using monies from contractors for building a house.

None of that procurement morass is easily apparent from the SAPS 2017/18 annual report. The pointer lies in a footnote on page 362 in the notes to the auditor-general report:

“The R700 3 m [sic] includes SITA procurement contracts and investigations to confirm possible irregularity is the responsibility of SITA.”

That’s a reference to the R700,351,000 listed against “other” in a list of irregular expenditure investigations dating back to the 2016/17 financial year. Others among those 65 listed investigations include one in relation to laboratory supplies (R2,487-million), another for licensing (R15.28-million) and for accommodation (R4.8-million).

It is not immediately clear at what stage these probes into irregular expenditure are; the annual report reflects the state of play as of 31 March 2018, the end of the financial year covered in this annual report.

“The majority of the irregular expenditure disclosed in the financial statements was caused by competitive bidding process not being followed… Effective internal controls were not in place for the approval and processing of payments as required… Although supply chain delegations were in place, related financial payments were made without financial delegations.”

“Payments made in contravention of the supply chain management requirements were not adequately and completely disclosed, resulting in irregular expenditure being understated by R968-million.”

The declared irregular expenditure in the 2016/17 financial year was stated as R284-million.

In the annual report, the SAPS internal audit committee report simply states that internal controls while “adequately designed, are not effective…” in preventing or detecting non-compliance.

“This resulted in significant irregular and fruitless expenditure being identified through internal and external audits, which was also in addition to that which was already disclosed by management.”

Various other performance achievements were also deemed as unreliable – whether that’s by crime intelligence on its products, the number of recovered stolen vehicles, the indicator that 90% of firearm licence applications were finalised in 90 days or the claim of 100% physical security assessment, when only 44,24% performance could be substantiated. Nor could the reported performance on updating guilt trial results within 20 calendar days be sustained: the police may have claimed 97.94% performance, the audit evidence provided indicated a level of 25.46%.

The auditor-general report in the annual report is a quality assurance check and balance. It presents how a department, in this case the SAPS, is doing in its financial and performance delivery.

The police tabled their 2017/18 annual report, with crime statistics as separate addendum, some two weeks after releasing the crime statistics, in what is a highly unusual move.

These performance details in the SAPS annual report also raise questions about detection and conviction rates across the criminal justice system, where a disjunct arises between police and prosecutors.

While the National Prosecuting Authority (NPA) 2017/18 annual report states it obtained 317,475 convictions in all criminal courts – from a total of 920,911 dockets submitted for a prosecution decision – the police claim convictions in what a back-of-the-napkin calculation shows is just over 447,000 cases, if the conviction stats across a range of crime categories are added up.

The numerical discrepancy may be caused by different methodology, or by a time lag that a case may drag on in court over more than a year, but the differences are sufficiently significant to raise questions about data integrity across the totality of the criminal justice system.

For example, the NPA annual report talks of murder prosecutions with a 77.7% conviction rate, or 3,601 convictions from 4,636 cases. The SAPS annual report covering the same period talks of 4,016 convictions, on the back of 26,156 “trial ready cases” arising from what the police call 31,007 “total complaints in court”.

But even taking just the police’s own statistics, a worrying trend emerges of the proportionally small number of cases actually making it to court, never mind to a guilty verdict. And that’s not only for crimes against women – a national priority – where the annual reports 177,620 reported cases ultimately leading to 20,735 making it to court, resulting in 17,422 convictions.

In the contact crime category – which includes murder, assault, sexual offences and robberies – of the 601,366 cases reported to police according to the crime statistics, just over half were “detected”, or 391,528, but just 190,017 led to trial ready dockets (it’s not clear if all actually were prosecuted) resulting in 44,754 convictions.

Police Minister Bheki Cele has publicly been supportive of his police managers, be it at the release of the crime statistics, or addressing communities at the end of their tether over lack of effective local policing. But the SAPS 2017/18 annual report makes clear the scale of the clean-up SAPS national commissioner Lieutenant-General Khehla Sitole has on his hands. DM