The Marvelous Mrs Maisel: A funny, human tale spun in the world of New York City stand-up comedy, circa 1958 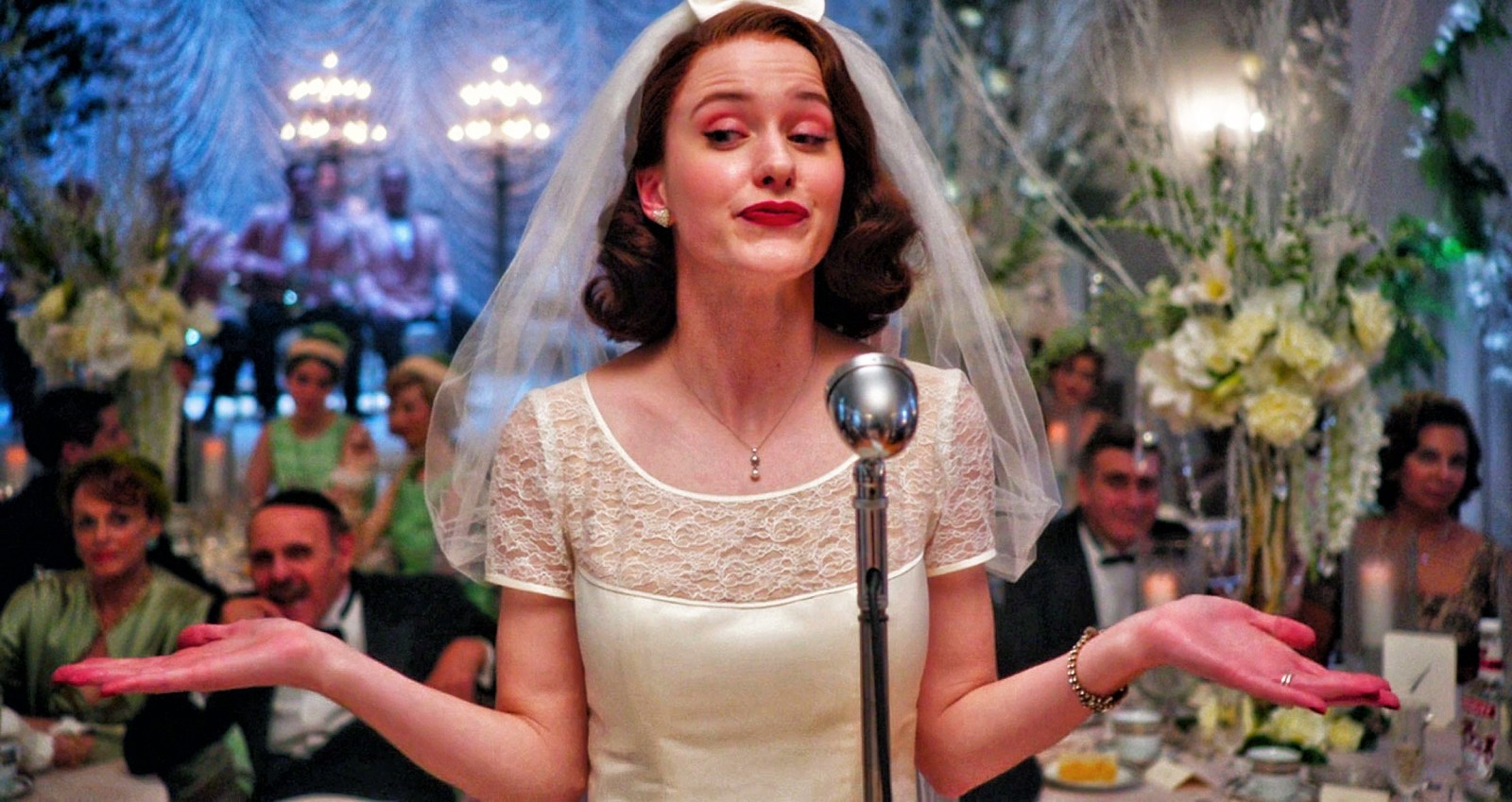 You Don’t Have to be Jewish, so the Bob Booker/George Foster comedy song, circa 1965, goes. You’d think the television comedy writer-director Amy Sherman-Palladino was Jewish, and she sort of is, but sort of isn’t. She said as much in a guest column she penned for Vulture, where she wrote, “My father was a six‐foot‐two Bronx Jew. My mother was a five-foot‐one Mississippi Baptist. Let the hilarity ensue.”

She explains that, though there’d been scarcely any Jewish ritual in her California home growing up, and visits to temple were as rare, this extremely noisy woman was once a very quiet little girl who, bored one day, wandered off and into a converted garage where she found a “beat-up record album stuffed behind the Freudian books that I desperately wish my dad had read”.

It was 2000 Years with Carl Reiner and Mel Brooks, “the record that introduced Brooks’s 2,000-year-old man character. Something stirred in me. Possibly it was heatstroke since we had no air-conditioning and we were living in the freaking Valley,” she wrote in Vulture.

“Carl is interviewing Mel, the 2,000‐year‐old man. ‘But I don’t look more than sixteen, seventeen hundred, right?’ It wasn’t just the words. It was the way he said everything. And then it dawned on me. That was Jewish. That’s how it’s supposed to sound. And feel. It’s fast and furious and human and exhausted and hilarious.

“And that was it. I instantly adopted a New York accent. I became Van Nuys via Brooklyn (well, Brooklyn in the Forties). I was never prouder than when people would say to me, ‘You’re from California? I thought you were from back east.’ I would dream of the Catskills. I would worship at the altar of Woody Allen. I would stay as far away from white bread and mayo as I possibly could. If my mother would not convert, if I could not have a bar mitzvah, if I could never truly learn the rituals, the words, the point of leaving a chair open at Passover, at least I had them. I had Mel. I had Carl. I had found my inner Jew.”

If, like me, you watched Sherman-Palladino’s many trips to the stage at the Emmy Awards last week to collect her and the show’s trophies, you can only be gobsmacked to discover that, no, she ain’t no New York Jewess. But it matters not, because whatever her Southern Baptist Ma brought to the party, the Jewish funny gene sure got through. Her writing, and her wit, are as New York Jewish as a boiled bagel or a hotdog from the takeout truck at the corner of 42nd and 6th.

Having heard that Carl Reiner/Mel Brooks recording, she somehow transformed herself into the evident New Yorker she became, and the ultimate result of that — via, significantly, Gilmour Girls, her first massive success after some minor achievements in writing comedy on shows such as the original Roseanne and Love and Marriage — is a very fine and funny piece of television art titled The Marvelous Mrs Maisel, which comes complete with the American misspelling of “marvellous”, but we’ll let that go.

Okay, Sherman-Palladino is loud. So much so that, by the third time she’d barrelled onto the stage at the Emmys (I hadn’t yet seen her show), the size of the ego was overwhelming what she had to say. I found myself facing a conundrum: all these awards, yes, that must be one hell of a show. And I like the setting – 1958 New York City, Upper West Side, well-to-do Jewish family, the stand-up comedy circuit. But, I surmised, if that much ego is all over the show, I don’t think I’m gonna like it.

But I’d seen the icon for the show every time I’d gone to the Amazon Prime Video app on my Apple TV box — Prime costs less than R50 a month and it gives you a whack of TV programming and movies, including masses of great documentaries — to see what was happening. The Marvelous Mrs Maisel looked wondrously period, festooned with the gorgeous cars of the day, those late Fifties wonders with their long, low lines and winged rears. It looked good.

Let’s start with that setting. Sherman-Palladino’s success in turning present-day Manhattan into what looks like the real thing, circa 1958, is awe-inspiring. When you visit NYC, it’s not long before you encounter a cordoned off street or part of a street where filming is happening. It’s a part of the city’s oeuvre, its heartbeat. Arguably still the most famous NYC street scene in a movie is in Alan Parker’s Fame, 1980, when a ridiculous number of people are singing Hot Lunch Jam. Our NYC city tour bus guide told us that that was the last time this kind of scene had been filmed unregulated, it caused that much traffic chaos for the entire city.

Fame had, for its day, a contemporary setting, so the buildings, cars, store fronts, bars and all the rest could look just as they were. Mrs Maisel is set 60 years ago, 22 years before even Fame was filmed. Fame now looks period. Five decades of cultural change, in cars, in fashions, in buildings and shop fronts. And the cameras in Mrs Maisel spend half their time in the streets. Someone is always walking from here to there or driving somewhere. And everywhere there are beautiful Chevrolets and Ford Fairlanes, vintage store fronts, restaurants and bars, people, people everywhere, all dressed and made up à la 1958. And it all looks wondrously, gobsmackingly authentic. There is nothing apparently CGI’d about it.

Into this, inject a brilliantly plotted, richly-written story, some splendid main and secondary characters, a handful of delicious cameos, and a sense of being a fly on the wall of another time and place, eavesdropping on a private little world long forgotten.

Then, that writing. A delightfully original and yet accessible story. We’re immersed in the underground stand-up comedy scene of the era, with Lenny Bruce among the key comedians of the time, just to place it firmly within its particular comic oeuvre. We have a loving married couple with small children. We have their respective parents. Each one, a sharply drawn, knowable character. Each one, portrayed with excellence, aplomb and yet nuance. We have things going right, and then going wrong; things going off the rails, and coming to a head. We have, at any given moment, nothing remotely boring.

The Marvelous Mrs Maisel wins the Emmy for Outstanding Writing for a Comedy Series:

Not least, however, is the very high standard of acting in The Marvelous Mrs Maisel. There are good reasons why both Rachel Brosnahan and Alex Borstein took home, respectively, the Emmys for Outstanding Lead Actress and Supporting Actress in a Comedy Series.

Brosnahan — how best to place this performance in the greater scheme of things? She made me think of the first time I saw Meryl Streep on film. She’s not like La Streep in any way, that’s not what I mean at all. It’s that she is so compelling, it’s how she uses every facial nuance to say something that need not be said with words. How utterly, utterly immersed she is in her role that she is it. And she’s bloody marvelllous. Yes, with three ls! Four, five. She can have an entire alphabet of llllls for my money.

Rachel Brosnahan wins the Emmy for Outstanding Lead Actress in a Comedy Series:

And Alex Borstein. The woman is instantly one of my all-time favourite comic actors. When you first see her behind the bar at the Gaslight Cafe (based on an actual venue of the era), you might presume her to be a bit player. Hang in there, she’ll be with you, and with Mrs Maisel, all the way.

Alex Borstein wins the Emmy for Outstanding Supporting Actress in a Comedy Series:

And there are good reasons why Tony Shalhoub was nominated for a supporting gong for his portrayal of Brosnahan’s father. Shalhoub is arguably best known and best loved as the obsessive-compulsive detective Monk. He’s no less watchable and lovable as Midge Maisel’s academic pa, such a character, and so funny.

There’s much more that could be said, but enough of talking about it already. Get to signing up for Amazon Prime if you don’t have it on whatever TV box you use, and start watching. Oh, and be forewarned: Prime Video is only days away from launching the much-anticipated The Romanoffs. The whole TV world is talking about it. Be ready. DM