Crime stats from Hell – brought to you by years of instability, political pliancy and the SAPS’s internecine battles 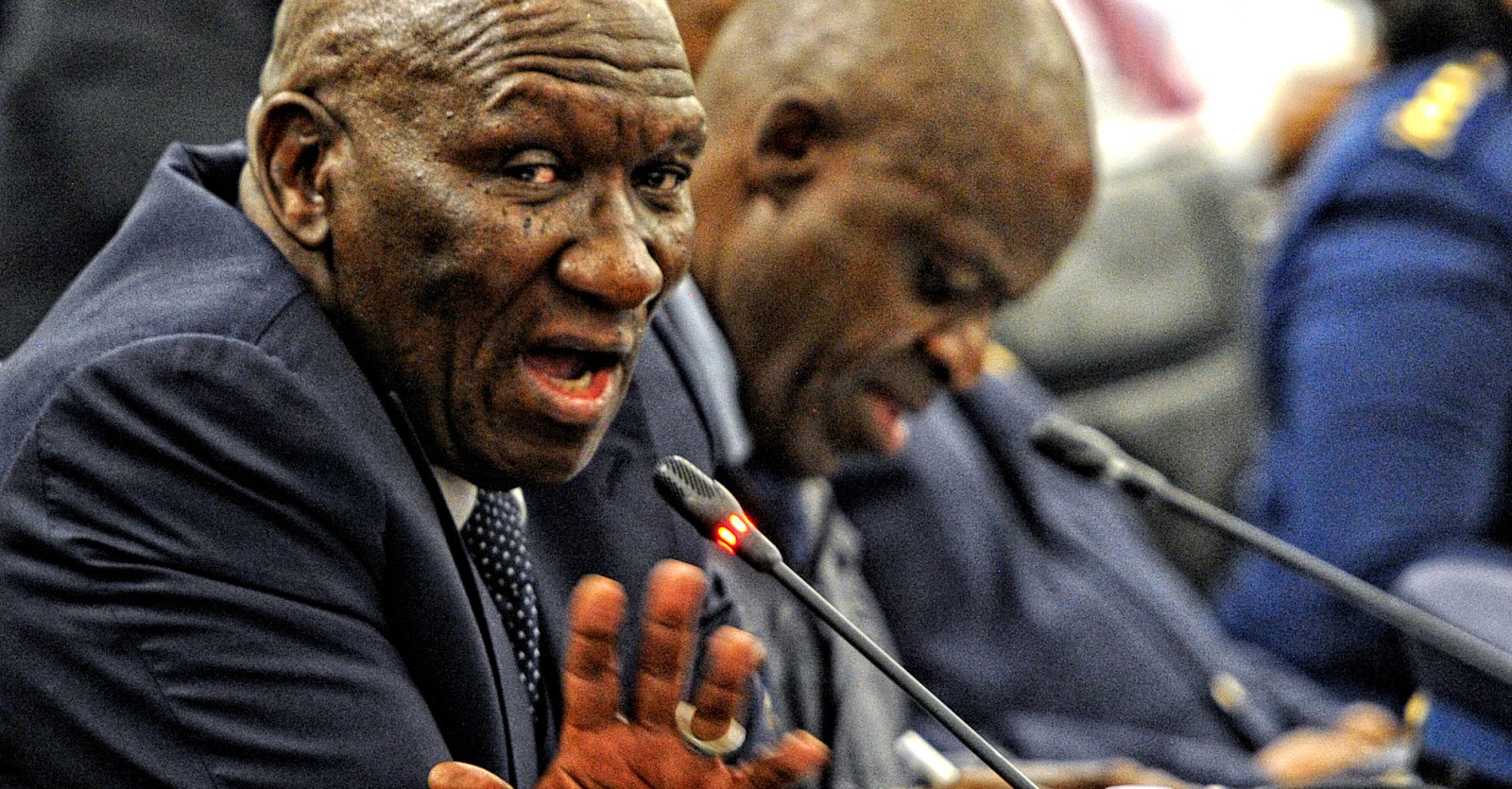 With an official murder rate of 57 South Africans killed every day – and murder is a yardstick for crime generally – Police Minister Bheki Cele on Tuesday did something politicians usually don’t: a straight admission that police had “dropped the ball”. That comes against the backdrop of the Cabinet security cluster of police, state security and defence not having met for two years, and 250 vacancies in the Hawks, the elite investigating directorate. After too many years of neglect, and sometimes plain sabotage, the chickens are coming home to roost.

The hollowing out of law enforcement and prosecution services has been a hallmark of the Jacob Zuma presidency as the Budget was skewed from the kind of policing that protects citizens to VIP protection that, according to the 2018 Budget documentation, received an almost 48% increase in allocations over just three years to the 2017/18 financial year.

Appointments of politically pliable heads at various levels in the police, at the helm of the Hawks, officially the Directorate for Priority Crime Investigation (DPCI), or the National Prosecuting Agency (NPA) – many of these have been challenged in court, usually by civil society organisations – have been a contributing factor. So has been keeping posts filled with acting appointments.

The politically motivated charges that were brought against former Hawks boss Anwa Dramat in the SAPS’s internecine battles have now been withdrawn.

Former Hawks boss Mthandazo Ntlemeza, whom the courts found lacked integrity and honour, ran out of court appeals in September 2017 as he unsuccessfully tried to challenge then police minister Fikile Mbalula’s decision to retire him. In January 2018 a similar retirement was announced for Richard Mdluli, the former crime intelligence boss who was suspended for over six years. And in mid-2017, one-time acting national SAPS commissioner Lieutenant-General Khomotso Phahlane was returned to his post in charge of police laboratories, a position he was immediately suspended from over claims of corruption and maladministration.

But the hangover of years of instability, political pliancy and the SAPS’s internecine battles has left a toll.

For the Hawks that’s been a depletion of capacity and staff – it has no internal auditing or accountancy experts – and a minute R351-million operational budget in the past financial year due to a failure to request and motivate for greater financial allocations.

And so the Hawks have been sharply criticised for flailing in their probes of Gupta-linked businesses, and having failed to act in the Steinhoff scandal.

At Tuesday’s post-crime statistics media briefing Hawks boss Godfrey Lebeya said there were 250 vacancies in the elite priority crime investigation directorate. But steps are under way to recruit in-house auditors and chartered accountants. And while the Hawks lost “no less than 104” members to the SAPS, there were discussions to ensure those skills were not lost completely.

The operational committee that brought together the Hawks and the directors-general of other departments that investigators rely on in their work has been “resuscitated”. Also “resuscitated” is the anti-corruption task team. This was part of a review of the Hawks structure, and the implementation of the regulation on conditions of employment required under the SAPS Act.

“In rebuilding the directorate, this personnel in the DPCI must be beyond reproach (so) the public can have confidence in the directorate that is elite,” said Lebeya.

For the SAPS the toll has been crime statistics for the 2017/18 financial year from 1 April 2017 to 31 March 2018 that Police Minister Bheki Cele described as “bad news” and “depressing”. The police somewhere, somehow had dropped the ball.

The focus fell firmly on the murder rate – 20,336 murders were recorded in the 2017/18 financial year or “57 a day, that’s how South Africans are murdered…. It borders close to the war zone while there is peace and there is no war in South Africa,” Cele told MPs on Tuesday morning.

“If we can’t deal [with] and control the murder cases, we are not bringing any joy to the South African people. It doesn’t matter what else we reduce…”

Amid a range of statistics from theft, drugs, robberies to rape, robberies and stock theft, many depend on South Africans actually reporting theses, which was not always so in up to half the cases, according to the Statistics South Africa 2017 Victims of Crime survey – murder is a definite yardstick for crime – few if any are not recorded by the SAPS.

The increase in murder, by 1,320 from the previous year – and that almost one in five murders was that of a woman or child, with 2,930 women murdered and 985 children killed – raised concern across the party-political spectrum.

The ANC in Parliament said it was concerned about the increase in murder rates and the incidence of gender-based violence, but that “our fight against crime requires action by all South Africans… because stolen and hijacked goods are often traded in our communities”.

DA MP Zakhele Mbhele said the “ANC’s inability to put the people of South Africa first… means citizens are not and do not feel safe in their homes and in the streets”.

United Democratic Movement (UDM) Chief Whip Nqabayomzi Kwankwa said the crime statistics were “terrible” and serious questions needed to be asked about what to do about addressing violence in South African society.

But what the SAPS and Cele omitted on Tuesday is as telling as what was said.

The police omitted to announce a drop in the number of what it calls public order incidents, effectively the policing of protests, down to 14,641. It’s only 31 protests down overall from the previous year, but the statistics show the number of peaceful protests are up – 11,058 protests passed peacefully, with 3,583 erupting in some level of (unspecified) violence.

The focus on violent protests, or course, has become part of the political lexicon to justify aggressive police action and clampdowns. The statistics show a very different picture.

While Cele emphasised that the Constitution set out the job of the police as keeping South Africans safe and secure, preventing crime and investigating it, he fingered “environmental design”, or urban layout, for making the police’s job difficult.

This after Cele and the national SAPS commissioner were asked why the police still don’t have guidelines of policing shacklands, where millions of South Africans live.

Police have told Parliament previously, and not just once, that they did not police between shacks as their vehicles do not fit.

The Social Justice Coalition (SJC) has lobbied for a change to this, and the adequate provision of policing resources to keep everyone safe.

“The constitutional obligation of the SAPS towards communities is not contingent on where people live, whether there are roads and whether they have clearly identifiable addresses… Importantly, and not to be overlooked, the absence of guidelines for visible policing in informal neighbourhoods also places police officers at risk in these neighbourhoods,” said the SJC memorandum handed to the police ministry on Tuesday.

Earlier in the day the message from the blue line was there were not enough police officials. The SAPS was down 10,000 since 2010, according to Cele, while national police commissioner Lieutenant-General Khehla Sitole told MPs how a review of the SAPS structure showed a staff deficit of 62,000.

“We could afford 3,000 (police trainees)… After consultations with the minister, we decided to cut somewhere else. We increased the numbers (of trainees) to 5,000,” according to Sitole.

He has quite a job on his hands. Not only without the warm bodies to put to the fight against crime, but also without some of the basics, like guidelines to police in informal settlements. And Cele upped the ante. It would be the last time police would present such statistics.

“The crime stats this financial year is nothing to write home about,” said Cele.

“I have said (to the SAPS leadership), never again do we come here to give these kind of statistics…” DM