Serena Williams and the balance of power in sport 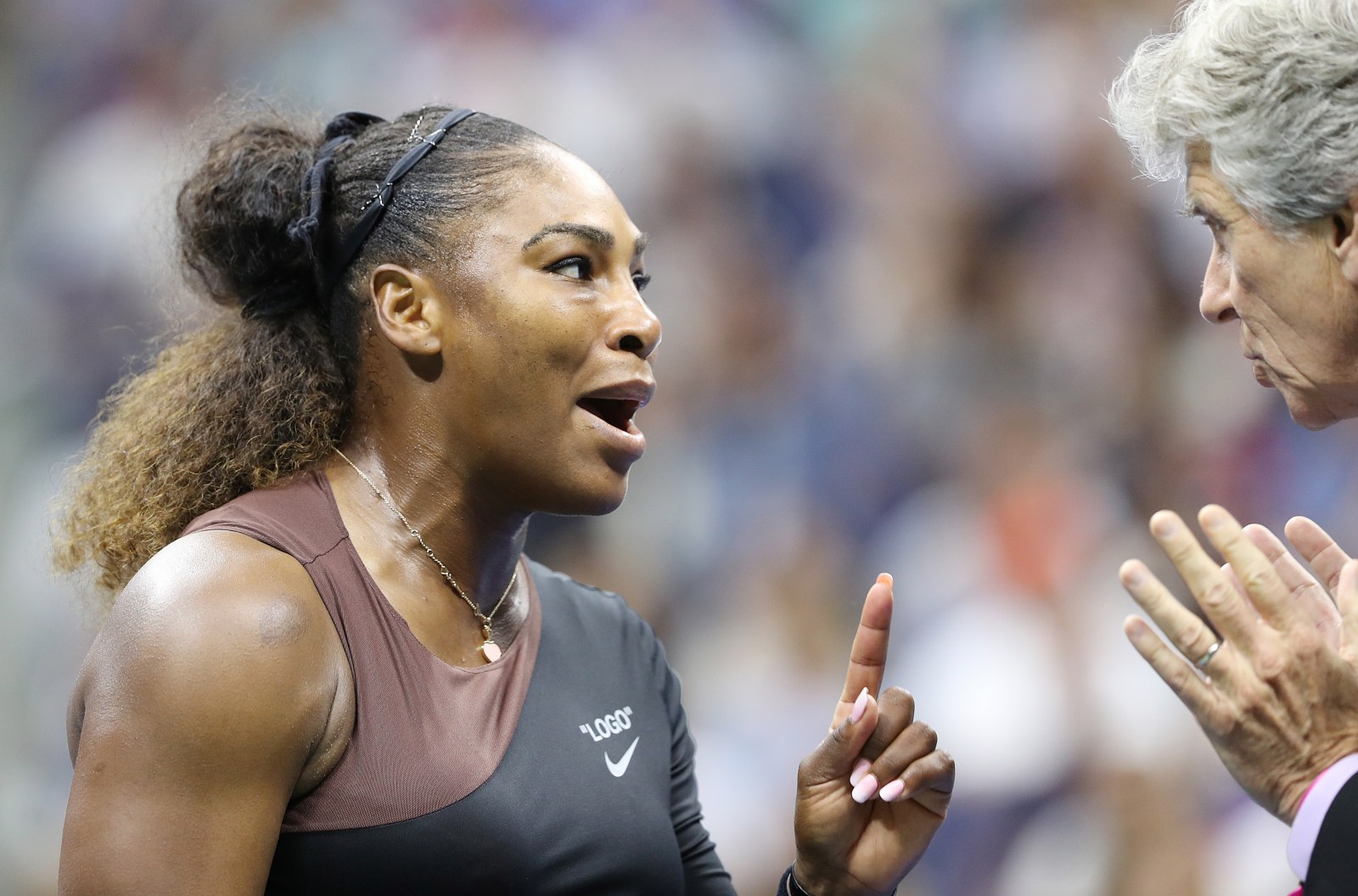 Serena Williams of the US gestures towards tournament referee Brian Earley (R) as she plays Naomi Osaka of Japan during the women’s final on the 13th day of the US Open Tennis Championships the USTA National Tennis Center in Flushing Meadows, New York, USA, 08 September 2018. EPA-EFE/DANIEL MURPHY

Japan’s Naomi Osaka will forever remember one of the most historic moments of her career as a day overshadowed by a spat between Serena Williams and umpire Carlos Ramos.

On Saturday, Japan’s 20-year-old Naomi Osaka secured one of the most memorable wins of her career. She beat Serena Williams in the US Open, becoming the first from her country to win a Grand Slam singles title. As Osaka stood next to her idol at the presentation ceremony, she was overcome by emotion. Perhaps the enormity of it all was sinking in. Perhaps she was overwhelmed by everything that had preceded that moment. Perhaps it was both.

Williams, hand on hip, reached out to put her arm around Osaka who had pulled down her visor to hide her tears.

“I’m sorry I had to win like this,” Osaka said as she accepted her trophy.

Williams, too, took a moment to calm the jeering crowd urging them to make the moment memorable for the young athlete.

The crowd obliged. And Williams, fighting back tears of her own, briefly dissolved the tension that had marred what should have been a memorable match for the tennis, not for the antics.

At the centre of the storm is chair umpire Carlos Ramos.

During the second game, Ramos handed Williams a code violation for receiving coaching from the stands. Patrick Mouratoglou was spotted giving a subtle hand signal, a thumbs-up forward motion. Williams disagreed, she told the umpire: “I don’t cheat to win. I’d rather lose. I’m just letting you know.”

Things remained calm. Until Williams smashed her racket in frustration and this time was given a penalty to go with the code violation. Things unravelled. The 36-year-old was fuming, perhaps because she believed the earlier violation had been rescinded. Definitely because she believed the umpire was wrong. She repeatedly asked for an apology. She called Ramos a “liar” and a “thief”. That word, thief, resulted in the third violation – this time for verbal abuse. The penalty was the automatic loss of a full game.

“That’s not right. This is not fair. This has happened to me too many times,” Williams pleaded as the match unravelled.

She’s not wrong. Back in 2004, she was given an apology after bad umpiring and in 2009, she got into a squabble with a lineswoman. In 2011, she was penalised for shouting.

Williams has long been fuelled by rage. That anger, a hallmark often praised in men, is frequently derided in women. Especially black women.

Predictably, the conversation that has followed since the final has largely dismissed Williams’ lived experience. Nobody is saying the tantrums are right, but as tennis legend Billie Jean King noted, the double standards are galling.

“Several things went very wrong during the (US Open) final today. Coaching on every point should be allowed in tennis. It isn’t, and as a result, a player was penalised for the actions of her coach. This should not happen.

“When a woman is emotional, she’s ‘hysterical’ and she’s penalised for it. When a man does the same, he’s ‘outspoken’ and there are no repercussions. Thank you, Serena Williams, for calling out this double standard. More voices are needed to do the same,” King tweeted in the aftermath of the weekend’s final.

Williams herself stood by her reaction after the match, with ESPN quoting her as saying: “I just texted Patrick (her coach), like, What is he talking about? Because we don’t have signals. We have never discussed signals. I’ve seen other men call other umpires several things. I’m here fighting for women’s rights and for women’s equality.

“For me to say ‘thief’ and for him to take a game, it made me feel like it was a sexist remark. He’s never taken a game from a man because they said ‘thief’. For me it blows my mind. But I’m going to continue to fight for women.”

All sport subscribes to some sort of decorum, often loosely interpreted depending on who is in charge or who they are in charge of. That nuance has been missed in the eye of this storm.

Umpire Ramos has a reputation of dishing out code violations. Some might say that this is evidence of an official taking no nonsense and tennis would be in a better place if all umpires took a stern approach.

But it’s inconsistent application of punishment to the reaction against those violations that’s most jarring in this case.

In 2016, at the French Open, Ramos cited Nick Kyrgios for screaming at a towel boy. On that occasion, despite Kyrgios going on a tirade against the umpire, he did not issue further warnings.

Also in 2016, at the Rio Olympics, Ramos took issue with Andy Murray when he misheard the Scotsman. Murray lambasted “stupid umpiring”. Ramos heard “stupid umpire” and issued a violation. Murray quipped: “If you want to be the star of the show, that’s fine.”

In 2017, it was Novak Djokovic who was punished for “unsportsmanlike conduct” after lifting his racket over his head and flipping a ball backwards in the direction of a ballboy.

Ramos responded: “Because of what you did. The gesture you made with the racket. This is not acceptable.”

Djokovic: “Did I hit the ball in your direction?”

Djokovic: “Did I hit it? Why did you give me a warning?”

Ramos: “Because of your attitude.”

No further violations were issued.

Also in 2017, with Rafael Nadal, Ramos issued the Spaniard with a time violation. Nadal said he would make sure that Ramos never chairs one of his matches again. No further action was taken.

There are other examples, too, but you get the picture and you spot the anomaly and you can, considering all the hell Williams has had to endure throughout her career, understand why she felt like she was being wronged (again) in the heat of the moment.

Maybe Ramos, like Williams, had had enough of being backchatted by tennis players and something snapped. But dismissing the nuance of power and the subtleties of sexism in this debate and zoning in on the athlete further underscores that sport is never simple and it’s never just sport.

Rules in sport exist for a reason and those who preside over it have a duty of care not just to the athletes, but to those paying money to watch, too. It’s why issuing diving soccer players with a red card for rolling around dramatically or sin binning rugby players when the handbags come out is applauded.

It doesn’t mean the infringing athlete was right. But, if we expect athletes to subscribe to certain measures of decorum, surely officials should be held to the same standards, especially if it overshadows what should be one of the most glorious days in the career of a young athlete? DM