FEAR and Orange-Hot Fury in the White House 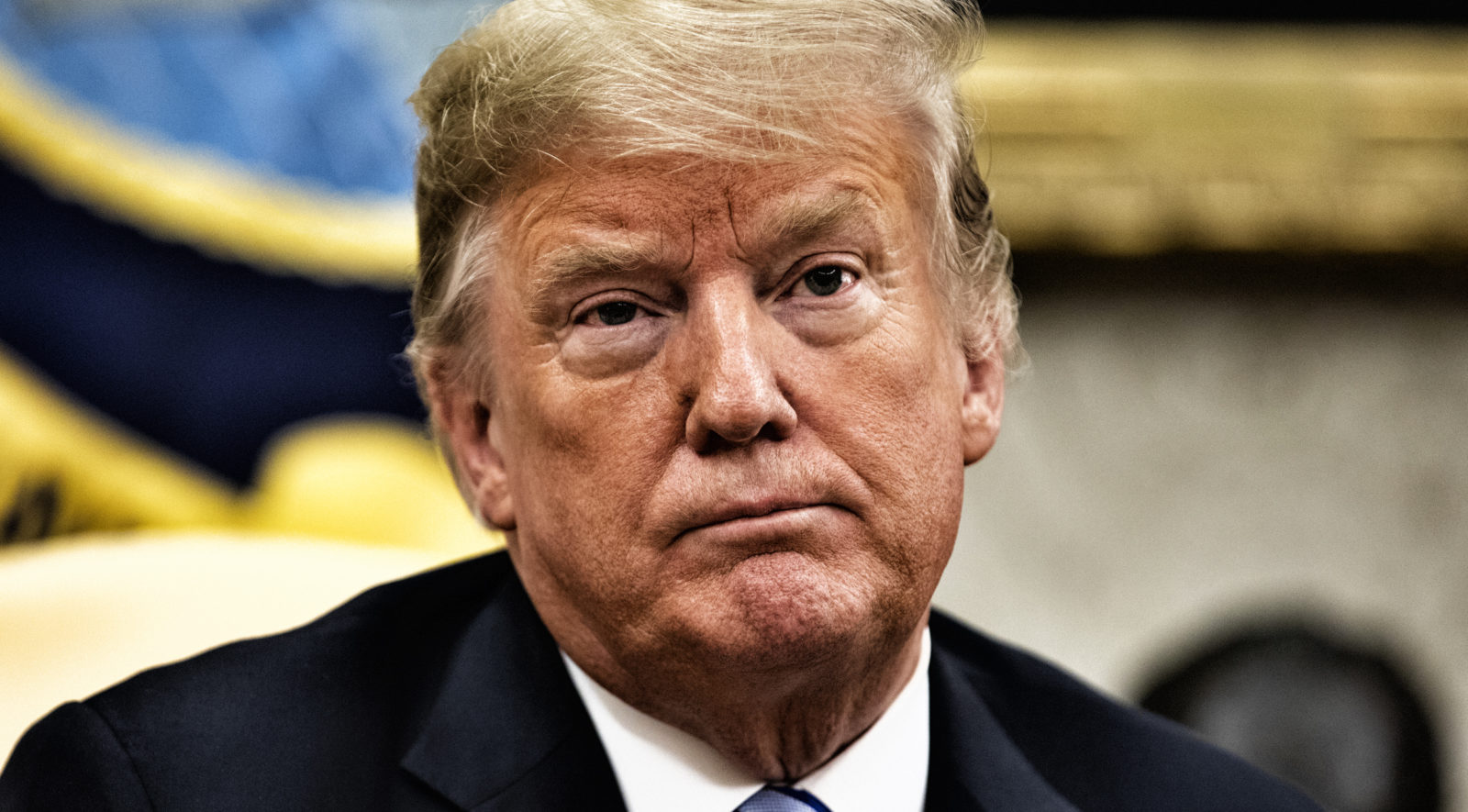 US President Donald J. Trump speaks as he meets with the Emir of Kuwait Sheikh Sabah Al-Ahmad Al-Jaber Al-Sabah in the Oval Office of the White House, in Washington, DC. USA, 05 September 2018. EPA-EFE/Alex Edelman / POOL

The hunt for the right literary metaphor to describe the Trumpian universe has been given impetus by a witch hunt now under way for the anonymous author (reportedly a senior administration official) of an Op-Ed that appeared in the New York Times last week. The Op-Ed spoke of an informal resistance movement within the government, struggling to prevent bizarre presidential decisions and actions. Break out your library membership card or click onto access to the Gutenberg website for some help?

This past week we have been witness to what must be the most bizarre (and troubling, even frightening) episodes and stories in an already astonishing Donald Trump presidency. And this, after all, is an administration that has been in office for less than two years — and there is most likely at least as long to go yet, into the future, before it wraps up.

All this has come in the midst of other really troubling events, even though Trump’s actions and words have seized the headlines. Just for starters, the most terrifying of these events right now is what seems likely to become the final episode of the death agonies in Syria. Russia, Iran, and Bashar al-Assad’s Syrian dictatorships are poised to crush the last redoubt around the northern city of Idlib – the last remnants of Syria’s “Arab Spring”. This agony is likely to play out on international television and online streaming, with the inevitable images of horrific death and destruction, for us all to contemplate as we think about future disasters.

But never mind, even more than his self-inflicted trade wars and tariff threats with allies, neighbours, and antagonists (except, of course, for Russia), Donald Trump’s near-total attention is now obsessively engaged with something much, much more sinister. Much more dangerous. Much more threatening to world peace, international security, and the future of the global environment.

And here we are referring to author Bob Woodward’s new book, Fear, and that anonymous opinion piece – presumably written by, and attributed to, a senior official in the Trump administration – that was published in the New York Times last week. That short article offered the notion that there was a kind of “deep state” resistance among otherwise putatively loyal Trump aides, advisers and senior officials. All of these people were determined to keep the president from doing truly appalling damage to the country, let alone to himself, as a result of his amoral, unprincipled, valueless but dangerously erratic personality.

While the Woodward book will not be officially released until 11 September, it has already unleashed explosions in Washington, what with its voluminous quotations and anecdotes, attributed by name, and with quotation marks, to senior officials, depicting a president who blithely goes about his day, barely and only fitfully moored to reality and empirical evidence. Woodward is no Martin Wolf or Omarosa Manigault-Newman. He has earned his stripes over many years, starting, of course, with his share of the famous investigative partnership that broke the Nixon-Watergate scandal that ultimately ended Nixon’s presidency. Thereafter, he has pounded out book after book, dissecting the failures, tests, and even occasional successes, of succeeding presidencies.

While many of those quoted in Fear have denied saying the specifics of what they are quoted on, none of them has, so far, explicitly denied the more general timbre and direction of the core thesis of the book. Moreover, Trump himself has been forced to accept that the people around him kept him from speaking with Woodward, probably with good reason.

But now, the anonymous column in the New York Times has just about sent Trump into orbit. In the past, we have tried to find literary analogues for Trumpian-style politics. There were Sinclair Lewis’ It Can’t Happen Here; Anthony Trollope’s The Way We Are Now; Philip Roth’s The Plot Against America, and Jack London’s The Iron Heel. But these seem insufficiently capable of explaining just what a fine mess we’ve gotten ourselves into, as Oliver Hardy might have said to Stan Laurel, in our present circumstances. Maybe there is some still more apropos imagery that can be drawn from the range of the world’s literature?

In his newest obsessiveness to find out who wrote those offending words, Trump seems startlingly akin to Captain Ahab’s ultimately fatal quest for retribution against the great white whale, Moby Dick, that had already claimed one of Ahab’s legs. In his own quest, Trump has now threatened to sic the federal government’s Justice Department onto the case of tracking down the traitor inside the tent, and so – presumably after sniffing that person out – they can then move on to draw and quarter the miscreant or defenestrate him or her, or, perhaps, just on principle, bury the individual in sand up to the neck, pour honey on that poor, miserable creature, and then allow the wicked desert ants to do the rest to the still-living victim.

Along the way, Trump has fulminated that the miserable cur that this did had carried out treason, and compromised the national security of the nation. (Trump and his team might want to look up the actual meaning of treason and its connection to the exposure of state security-related secrets that might lead to a devastating military defeat, as opposed, simply, to calling a spade a spade, while speaking about the president’s mental stability.)

On the campaign for the now-close at hand midterm election, former President Barack Obama took the gloves off and ripped into the incumbent president just as the Woodward book and the anonymous column were also making news. In response, Trump said the Obama speech had put him to sleep.

The Washington Post, commenting on the president’s own ripostes, said:

“The one-two punch of the Woodward book and anonymous Times column inspired Trump to take the extraordinary step of publicly defending his very mental capacity. ‘… can’t get up and talk in front of a crowd, many times without notes, for an hour and 25 minutes and get the biggest crowds in the history of politics . . . you don’t get up and do that because you don’t know how to think or talk,’ Trump told reporters Friday aboard Air Force One. ‘You can only do that if you’re at a very, very high level. I’m highly educated and always did well — always did well — no matter what I did.’ The night before, at a campaign rally in Billings, Mont., Trump boiled the Democratic campaign agenda down to a single word: Impeach. The president’s oversimplification placed himself at the heart of the campaign, with Trump offering up his political future as a central reason to vote Republican.”

Once the offending, anonymous column had appeared, and it had provoked Trump’s white-hot fury, senior official after senior official released statements, effectively saying, “Not me, sire!” Then, one of Trump’s most loyal supporters in the Senate, Kentucky Republican Senator Rand Paul, proposed using lie detector tests to find the guilty varmint. (Picture it: A queue, leading into a small, dark office, deep in the bowels of the White House and close to the secret fallout shelter, where grim-faced men are waiting to wire up cabinet members – one by one – to their lie detector apparatus, in order to check on whether or not they might be that toxic fly in the Trumpian ointment. And, outside that room, stands a brace of big, black-suited men, waiting to hustle the finally exposed offender off by sealed aircraft to Area 51, or Gitmo….)

As a result of this obsession with finding out who the “traitor” is, the White House has reportedly been turned upside down, with everyone suspecting everyone else is the turncoat. Think of the uniformed coterie that follows and fawns over a crazed despot and then denounces a traitor, in order to get the imagery right.

Inevitably, too, Trump staffers are informally telling media contacts that the noose is tightening, and the list of suspects is getting smaller and shorter, day by day. Once they narrow it down to the final two or three, perhaps we will see an entirely new episode of Celebrity Apprentice – this time where The Donald gets to utter his most famous expression, “You’re fired!”, repeatedly. The ratings will be amazing. Worldwide live coverage awaits. Think of the sponsorship deals!

But while that Ahab-Moby Dick nexus – what with that whaling ship captain’s obsessive-compulsive behaviour – helps us somewhat in grasping Donald Trump’s psychological make-up, there is yet another literary parallel that makes some serious sense too. And that, of course, is the tale of Lt Commander Philip Francis Queeg, the character in the novel, film, and drama that depicts events on the naval ship, the USS Caine, in the midst of World War II. With the deteriorating morale and discipline on the ship as a result of command lapses, the ship’s subordinate officers finally convince themselves that their ship’s captain, Lt Commander Queeg, is incapable of leading the vessel and they take over. In short, they carry out a mutiny.

In the court martial that inevitably follows, the navy lawyer for the defendant officers, Barney Greenwald, cracks the ship captain’s facade while he is in the witness chair, as he tells a tale of his obsession with some mysteriously missing tins of strawberries from the ship’s galley. As Greenwald’s questioning intensifies, Queeg becomes increasingly agitated, increasingly angry over the missing tinned fruit, and, finally, in a tell-tale moment, he begins fiddling loudly with a handful of ball bearings to relieve his growing stress.

In our current circumstances, although there is (apparently) no pocket of ball bearings or strawberries, in Donald Trump’s most recent speech, he became so agitated over the very word “anonymous” that he was unable to pronounce it. Meanwhile, the hunt for the anonymous writer continues without let-up in the White House, occupying the near-total attention of the staff, even as there has been little success on the part of that so-called “deep state” resistance to rein in the wild and crazy part of the Trumpian world view. He does say, however, that he is expecting a very nice letter from his great, good friend, Chairman Kim Jong-un of North Korea, so everything’s gonna be all right.