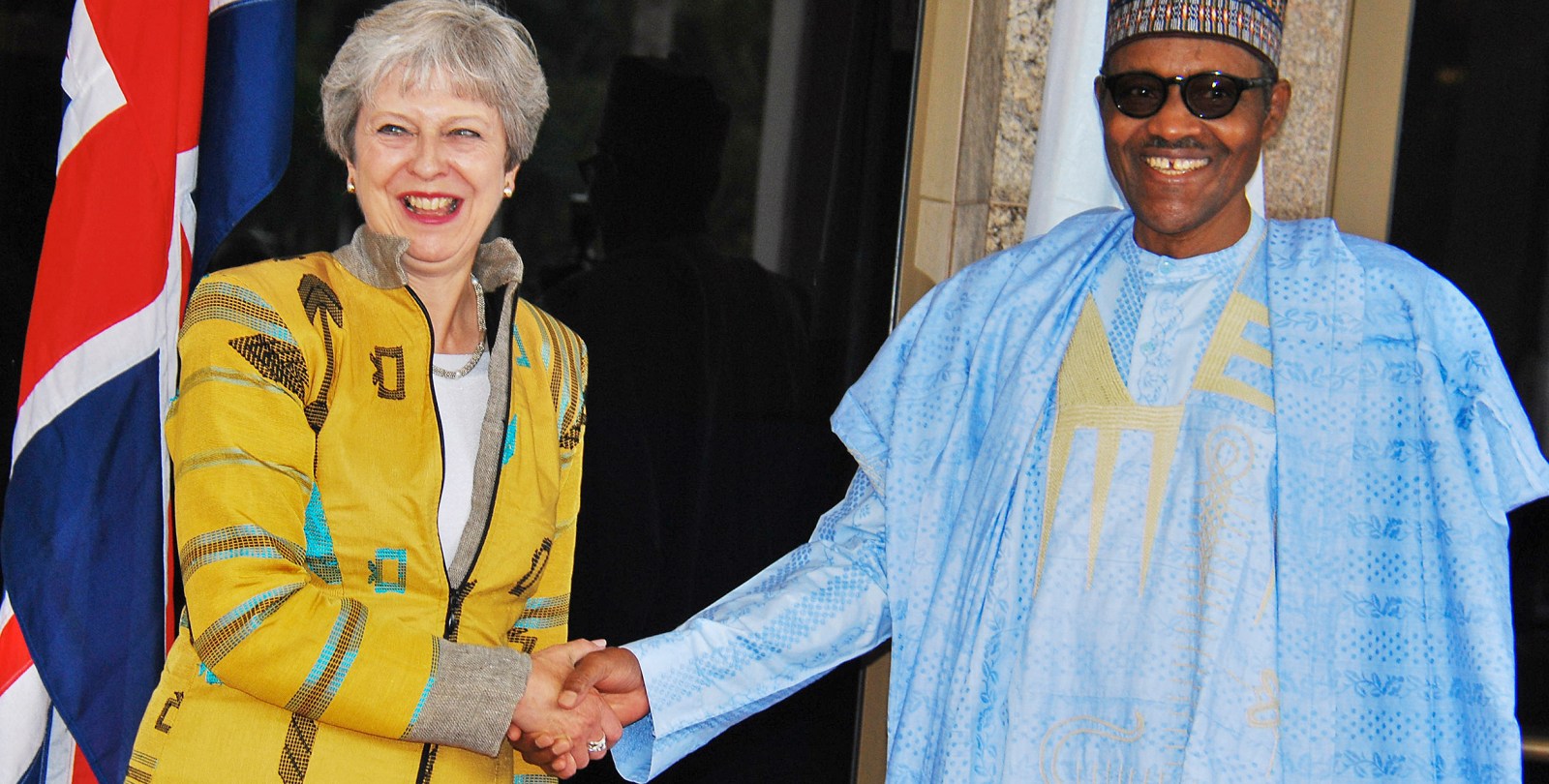 Nigerian President Muhammadu Buhari (R) meets with British Prime Minister Theresa May (L), at the Presidential Villa in Abuja, Nigeria, 29 August 2018. The visit is the first visit by a British Prime Minister to Sub-Saharan Africa since 2013. She is visiting South Africa, Nigeria and Kenya meeting with business leaders and her counterparts in government with a central message of renewed partnership between the UK and Africa. EPA-EFE/STR

Following her visit to the continent, British Prime Minister Theresa May is preaching private investment in Africa focused on British corporate contributions to African job creation, security, and anti-corruption through yet-to-be-clarified accountability standards. It’s better late than never, given the astounding youthful age demographics and economic potential of the continent, and its rich natural resources.

UK Prime Minister Theresa May whirl-winded around, starting in South Africa then zipping to Nigeria and then to Kenya, where a British head of State had not officially visited in 30 years.

It seems to be in the same league, if you think about it, of Harold Macmillan’s Wind of Change speech, which ushered in a new paradigm of global approach to the continent of Africa, from colonialism to decolonialism.

And now we have the British Prime Minister preaching private investment in Africa focused on British corporate contributions to African job creation, security, and anti-corruption through yet-to-be clarified accountability standards. Certainly the Americans, French, Chinese, Indians and Germans have been munching at the trough of economic investment in the world’s second-largest continent for quite some time.

But better late than never, given the astounding youthful age demographics and economic potential of the continent, and its rich natural resources, which can be much better tapped into once good governance standards are better designed and more effectively implemented in African nation-states.

The Prime Minister, with her own political worries back home, was wise to approach the heads of state she visited with gestures of reconciliation and human security concerns, since she is dealing with a brand new generation of leaders she will have to bargain with as potential partners rather than former colonial inferiors.

It is no accident she came to huddle with shrewd businessman President Cyril Ramaphosa first, who is the most astute global thinker and negotiator on the continent, these days occupying the seat of a head of state and who clearly understands it is a new day for a continent that urgently needs to take its rightful place in the global order.

What May no doubt already knew is that she is dealing with African leadership moving away from the model of colonial handouts while neglecting domestic economic empowerment. Leaders in states such as Nigeria, Kenya, and South Africa, as well as in Botswana, The Gambia, Tunisia, and yes, even Zimbabwe, realise they are facing increasing pressure by emerging civil societies demanding good governance, quality service delivery, a fight against corruption and better enforcement of human rights. The problem is that public sector financial resources have been drained by bureaucracies originating from colonial eras, ineffectual application of contemporary western modes of public administration and financial mismanagement.

Pro-good governance private sectors, both international and internally grown and owned by citizens, can do much to provide resources to make governance much more efficient and effective. This can be done through developing private-public partnerships to address pressing societal needs such as quality housing, health, education, and land reform for all, but especially for poor and otherwise marginalised and oppressed populations.

This is the reason the British Prime Minister’s new approach to the continent is so critical and can be of much societal good. What matters is how strategic African heads of state are willing to be in joining new kinds of cross-national and continent-wide coalitions to address the role of the private sector to nurture models of economic development that are globally as well as nationally competitive.

And while such strategic thinking and acting is happening, it needs to be a form of advocacy to the British and others knocking at the door, or already in the continent, that whatever Westerners and Easterners plan to do in regard to increasing private investment, they must insist that African political leaders, business communities and civil society be involved as partners in the planning and implementation processes.

Otherwise, such gestures as that offered by May are merely the most recent form of neo-colonialism.

With all this said I wish to make one last point. Namely, whatever private-public game plans Westerners and Easterners come up with in collaboration with African leaders, non-economic factors which actually drive economic development and eradicate economic inequality must also be an integral aspect of what they plan to do and actually implement.

No matter the country, if cultural issues such as poor interpersonal skills, poor work ethics, interpersonal and institutional prejudices such as racism, sexism, ethnocentrism, social separation and massive violence, are not effectively dealt with through no-tolerance laws and policies and through schools, courts, media, governance, faith communities, and corporate social responsibilities, you can kiss goodbye any form of private investment and subsequent viable economic development for all citizens .

Economic investment has only marginal impact and only benefits the privileged when it is not grounded in norms of strong work ethics and norms and values of cross-cultural and social openness. It will just go nowhere in societal transformation endeavours, as we are already seeing in this and in other African nations. DM