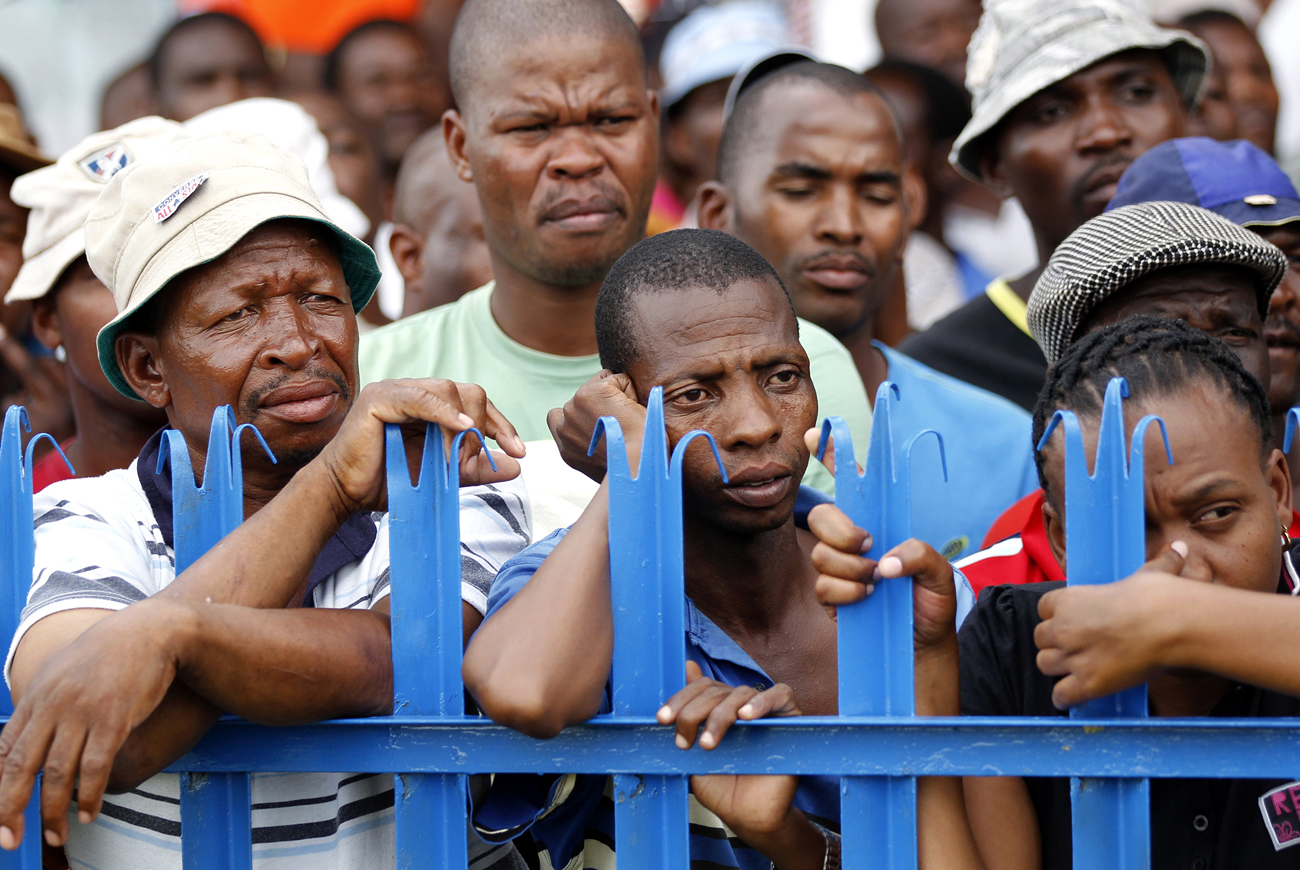 Mineworkers listen to Zwelinzima Vavi, COSATU General Secretary (not in picture), during his address at the Impala Platinum mine in Rustenburg, 120 km (74.6 miles) northwest of Johannesburg February 21, 2012. REUTERS/Sipiwe Sibeko

While President Ramaphosa courts global leaders for foreign direct investment, the headache of how to create jobs in South Africa’s struggling economy persists. There is clearly a need to be innovative and think outside the box. Here we ask: would loosening immigration control, making it easier for non-South Africans to enter and work, lead to job creation? The short answer: yes, evidence suggests it would.

There are widely held misconceptions around the impact of immigration on the economy. If you listen to politicians, and across the political spectrum from the ANC, DA, EFF and, most recently COPE and ABM, you’d be forgiven for thinking that ‘letting the foreigners in’ can only be a bad thing. They take jobs, right? Wrong.

We’ll get to the figures on that shortly, but first, why is job creation so important, and what makes it happen?

Almost as soon as Cyril Ramaphosa became South Africa’s fifth president, he promised to create a million jobs. His predecessor Jacob Zuma had made similar promises in 2011, suggesting five-million jobs would be created by government over 10 years.

Politicians know full well the limitations of government to directly create jobs, yet undertaking to bolster job growth is a mainstay of politicians’ vocabulary across the political spectrum. Who would argue against it?

In a country where unemployment remains persistently high – 27.2% in the second quarter of 2018 – promising more jobs will certainly strike a popular chord with South African voters. But with the latest year-on-year growth rates suggesting South Africa’s economy expanded by a mere 0.8% since the first quarter of 2017, where are the millions of jobs going to come from?

There is no simple answer to either increasing the employment rate or creating more jobs. Broadly speaking, economic growth is associated with a reduction in the unemployment rate, but this is hardly a rule. An IMF paper from 2016 shows that the relationship between GDP growth and employment varies significantly between economies.

Of course, governments can literally create jobs: they can increase the number of public sector employees. By hiring more firemen, soldiers, teachers, or deputy ministers, a government can create jobs out of thin air that are not dependent on economic growth or any other factors. Up to a point this is a necessary exercise (teachers serve a vital societal function, for example), but it has diminishing utility when those jobs hold no obvious purpose, or when the overall cost of maintaining all of them becomes untenable.

But neither governments nor politicians can create jobs in the broader economy; to think otherwise is fallacy.

Government’s role as a job creator can be that of a facilitator. Through policy choices government can develop and maintain the best possible conditions under which jobs are created and people are hired by other economic actors (such as businesses).

One piece of the equation to create jobs in South Africa could be a determined policy to increase immigration. Yes, increase immigration. The South African government recognises, at least on some level, that there is value in attracting economic migrants to the country. Immigrants can bring valuable skills to the country and can serve to fill gaps in the labour market left by locals.

Evidence suggests immigrants may go one better than filling gaps: rather than “stealing locals’ jobs”, immigrants are in fact potentially creating more jobs. Research conducted in Gauteng found that far from taking jobs from South Africans, more foreign shop owners in Soweto employ locals than local entrepreneurs. It’s worth noting that most of these migrant entrepreneurs would be considered “unskilled”.

A recent study jointly authored by the Organisation for Economic Cooperation and Development (OECD) and the International Labour Organization (ILO) found that immigrants provide a significant boost to developing economies (including South Africa’s). They contribute to the economy as consumers and tax-payers, but also in many instances as job creators and innovators. A UN study also demonstrates social and economic benefits of migration in Africa for both source and destination countries.

The evidence for South Africa is clear and growing: immigrants contribute to economies and create jobs.

However, while research highlights the potential positive contributions to the economy foreign nationals can make, migration policy has historically hindered access across all skill levels and has retained a restrictive quality, where high-skilled migrants are frustrated by red tape and bureaucratic delays, and regional and low-skilled migrants have no legal pathways to conduct work in the country.

Refugees and asylum seekers, while being protected by the progressive Refugees Act, are squeezed by corruption, an anti-asylum seeker bias, and unlawful policies that push applicants into undocumented status. It is a system where genuine refugees face an interminable process to gain recognition, often as long as a decade.

As well as potentially dampening the job creation that can come from immigration, South Africa’s closed-door policies are costing it big. A 2012 report found unlawful detention practices cost the state millions in legal fees, with a 2014 report revealing R503.3-million in pending claims against Immigration Affairs.

The consensus across the board is that South Africa’s current migration policy is not an effective means to harness the positive aspects of migration, a goal specified in the National Development Plan. But in terms of likely future policy directions, there is both good news and bad news.

Positively, the Department of Home Affairs has recognised the need to establish a pragmatic regional migration scheme for the SADC region as outlined in its 2017 White Paper on International Migration.

Negatively, the government continues to focus on securitising immigration. The recent Refugees Amendment Act makes this clear through the introduction of a host of draconian restrictions, including additional bureaucratic process ostensibly aimed at determining if an asylum seeker should be provided with the right to work.

Instead of focusing on processing applicants, and giving them opportunity to contribute to the economy, the legislation actively seeks to squander the productivity of many. The Border Management Authority Bill – dubbed by an opposition MP as “one of the worst pieces of legislation that has come before the House” – would close the borders further still and establish a bureaucratic behemoth under the Department of Home Affairs, a department well-known for its disregard for the rule of law and accountability. Worse still, the White Paper proposes detention facilities for asylum seekers on the country’s borders, a significant move away from the current non-encampment model.

Even highly skilled foreign professionals face difficulties in becoming productive. Estea Fourie, the Manager of the Employment Access Programme at the Scalabrini Centre of Cape Town, notes that many refugees and migrants have valuable experience and qualifications in fields such as healthcare. But to utilise these degrees and qualifications, individuals face a lengthy accreditation process that can take years.

South Africa’s closed-door policy is counter to trends on the continent. According to the Visa Openness Report of 2017, Africa has increasingly liberal visa regimes, especially for Africans travelling within Africa. Last year, Kenya announced visas on arrival for all African travellers, following in the footsteps of Ghana, Rwanda, Mauritius, Nigeria, Benin and the Seychelles. South Africa lags behind, ranking 34 out of 54 countries.

On a continent where the economic benefits of opening borders are becoming an ever more realised narrative, in South Africa, the optics of a pro-immigration stance seem to be politically unappealing. But the evidence clearly suggests that the government should pick economic pragmatism and potential job growth over populism, reverse its regressive immigration policies, and open up its borders. DM

Markus Korhonen is a political analyst. He currently lectures on the global political economy at the University of Stellenbosch

Laura Freeman is an independent migration and conflict consultant, with a focus on xenophobia in South Africa. She is also a Research Associate at the University of Cape Town’s Safety & Violence Initiative (SaVI)