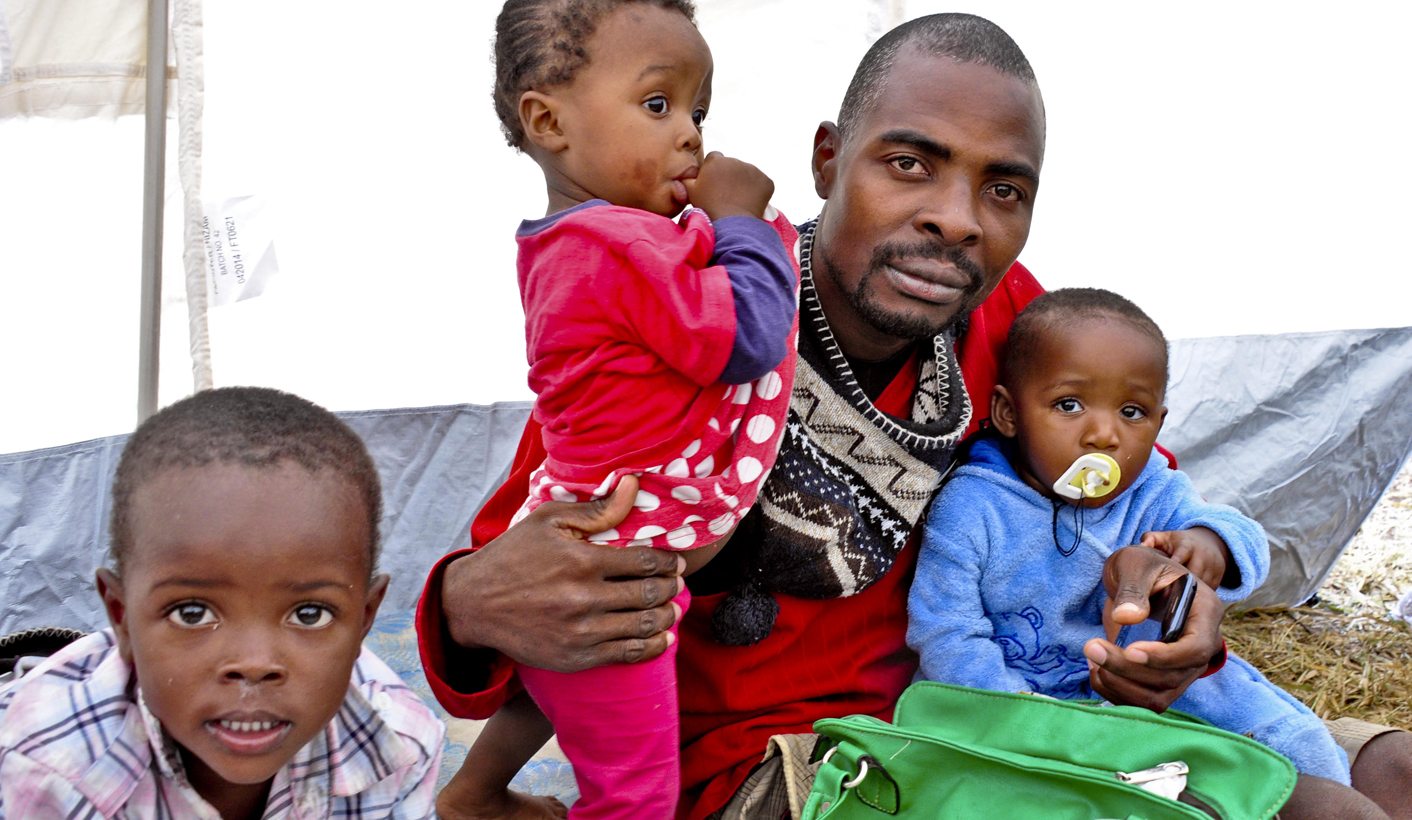 A new report on the experiences of refugees and asylum seekers in South Africa paints an abysmal picture of endemic corruption, extortion, deliberate delays and serial abuse at almost all stages of the process. A range of South Africans from security guards at the department of home affairs’ offices and police, to home affairs and border post officials, prey on the vulnerable and desperate. By MARIANNE THAMM.

If we are, as Mahatma Gandhi suggested, to judge the greatness of a nation by the way its animals are treated, how are we to judge then a country which treats or views vulnerable human beings as easy prey for serial abuse and extortion by government officials?

South Africa’s reputation in the rest of the continent has been tarnished by years of sporadic violence and xenophobic attacks directed at foreign nationals. After the last violent spasm earlier this year ANC secretary general, Gwede Mantashe, suggested that one solution would be to set up “refugee camps so that we can document people”.

For years now NGOs working with refugees and asylum seekers to South Africa have reported on the endemic corruption in the system. In 2004 the public protector published a report on unlawful conduct at the Braamfontein refugee reception office.

Reports from the US state department between 2009 and 2013 have also consistently flagged corruption in annual country reports stating, “although the department of home affairs (DHA) had anti-corruption programmes in place and punished officials or contracted security officers found to be accepting bribes, NGOs and asylum applicants continued to report that immigration authorities sought bribes from those seeking permits to remain in the country, particularly in cases where applicants allowed their documents to expire”.

With the exception of a few high profile cases, the overall response by the department of home affairs has been “tepid” usually placing the burden of proof on the victims of corruption without conducting independent investigations.

For example, in July 2014 an asylum seeker to South Africa approached Lawyers for Human Rights (LHR) with a complaint about an official working at the most problematic refugee reception office (RRO) in the country, Marabastad in Pretoria. The refugee status determination officer there had asked the woman for a R2,500 bribe. LHR had contacted the home affairs department’s counter-corruption unit which then agreed to set up a ‘sting’ operation to expose the corrupt official.

As part of the operation it was agreed police would provide R2,500 in marked notes and obtain a court order authorising the arrest of the officer. However, shockingly, a week later, the counter-corruption unit contacted the LHR asking whether the organisation or the woman who had made the complaint would be able to provide a portion of the R2,500 bribe.

“When LHR expressed its concerns over the way the operation was being managed, officers from the counter-corruption unit criticised the organisation for forcing its client to withdraw from the operation. The officers again contacted the client directly and threatened to arrest her for not co-operating. In addition, they suggested completing the operation with counterfeit notes, promising to get her released if she was arrested on counterfeiting charges,” writes Roni Amit, author of a report titled ‘Queue Here For Corruption – Measuring Irregularities in South Africa’s Asylum System’.

A unit manager who had agreed to investigate the matter failed to follow up with LHR. However, three months later, in October, the manager of the Marabastad refugee reception office requested the contact details of the woman who had lodged the original complaint, ostensibly to discuss the allegations of corruption.

“Fearing that this would subject the client to intimidation at the RRO, LHR declined to provide this information. Subsequently, the new centre manager at Marabastad arranged for the client to undergo another status determination interview and she was granted refugee status.”

This is just one example of countless uncovered during research for the report which was released in Johannesburg this week. The report is a collaboration between the African Centre for Migration and Society and Lawyers for Human Rights and is based on a survey of 928 asylum seekers and refugees as they either exited or waited to enter one of the country’s five refugee reception centres in Cape Town, Musina, Durban and two offices in Pretoria. The survey took place between June 2013 and June 2014.

Respondents were from 34 countries, almost all of them in Africa. Countries outside of Africa included Pakistan (18 respondents), Bangladesh (10 respondents), India (eight respondents), and Nepal (one respondent). Preliminary figures released by the DHA for the 2013 calendar year indicate that applicants from Burundi and Somalia had decreased significantly with the highest numbers of asylum applicants in 2013 from Zimbabwe, Nigeria, the DRC, and Ethiopia. Other nationalities encountered with some regularity at the reception offices included Ghanaians (25 respondents), Ugandans (23 respondents) and Malawians (17 respondents).

South Africa’s refugee reception offices are the gateway through which asylum seekers and refugees seek legal access and protection in the country. Amit writes that the assessment revealed “significant levels of corruption involving multiple actors, occurring at all stages of the asylum process, and continuing even after an individual had obtained refugee status. Results varied by office, but overall almost one-third of respondents experienced corruption at an RRO. The Marabastad RRO in Pretoria showed the highest levels of corruption”.

The report found that several factors had contributed to the prevalence of corruption in the country’s refugee reception offices. Foremost among these is the department of home affairs’ (DHA’s) failure to respond to high levels of demand that quickly exceeded the capacity of a system designed around individualised decision-making.

Rather than addressing the situation by reforming immigration policy or increasing resources in the asylum system, the department’s single-minded focus on decreasing demand without any concomitant attention to service provision exacerbated the situation. The decision also to close three refugee reception offices has contributed to these problems.

Refugees and asylum seekers to this country are preyed on from the moment they make a decision to free their homelands. From having to pay truck drivers transporting them across borders to border officials (13% reported paying these), to being harassed for bribes in queues (20% overall and 51% at Marabastad) to being denied access to offices without paying a bribe (13% and 30% at Marabastad).

If an asylum seeker miraculously makes it through the doors they were preyed on once again with 13% overall reporting this occurrence and 31% at Marabastad needing to pay their way. Sometimes multiple visits resulted in serial opportunities for abuse with 12% of respondents saying they had paid at least once to renew asylum permits (with 24% at Marabastad).

Trying to get officials to resolve an issue speedily presented even further opportunities for extortion with 20% being asked for money to facilitate this, with Marabastad once again in the lead with 47%.

Over half of the respondents had been in the system for over 180 days, which is the period stipulated in the Regulations to the Refugee Act for the asylum process to be completed. Amit reports that the presence of corruption is significant “for its effects on the ability of individuals to access protection; on the integrity of a system that is an integral part of South Africa’s constitutional and international obligations; and on the incentive structures within and rational functioning of the public service. Continued corruption risks producing a system where the behaviour of public officials is removed from legal guarantees and the principles of equality, fairness, and accountability”.

Delinking refugee status from protection needs also undermined the government’s migration management goals and provided a mechanism for economic migrants to enter the country and regularise their status, even as government devoted greater resources to border control and deportation.

“It is precisely those migrants whose entry the government is seeking to control who can undermine these controls by engaging with corrupt officials. At the same time, individuals with valid protection needs may be denied protection because they are either unwilling or unable to engage with these same officials.”

“These conditions create multiple opportunities for corruption. Additional factors provide further incentives: individuals must generally make multiple visits to a refugee reception office to address a single issue; they remain in the system for several years, necessitating even more visits; and they receive legally problematic status determination decisions that require appeals. Rather than address the factors contributing to corruption, the DHA has adopted a reactive approach in which it responds to individual allegations of corruption; it has, thus far, failed to initiate more far-reaching investigations or reforms of the asylum system.”

South Africa’s asylum system was established in 1998 to identify those individuals in need of protection in accordance with the country’s international obligations and democratic character. Implementation of this system, however, says the report, has strayed far from this initial intention.

“In order to address the prevalence of corruption, the department of home affairs (DHA) and other stakeholders must recognise that it pervades all stages of the asylum process, that it occurs at multiple sites, and that it is a continuing phenomenon that is not confined to isolated individuals or incidents.”

Amit writes that even as government continued to point to the “scourge” of economic migrants abusing the asylum system, it did little to combat the corruption that enables individuals without protection needs to claim asylum while denying this very protection to the system’s intended beneficiaries.

The report makes various recommendations to the DHA, to parliament and the committee for home affairs, the public protector and South African Human Rights Commission, the National Prosecuting Authority and the South African Police Services.

In an interview yesterday Amit said she had attempted to engage with the department of home affairs with regard to the report but until now no response had been forthcoming. DM

Photo: A Mozambican immigrant worker from South Africa arrives with his children at Boane refugee camp in Moamba, Mozambique, 17 April 2015, after fleeing from the xenophobic attacks committed in South Africa. EPA/ANTONIO SILVA