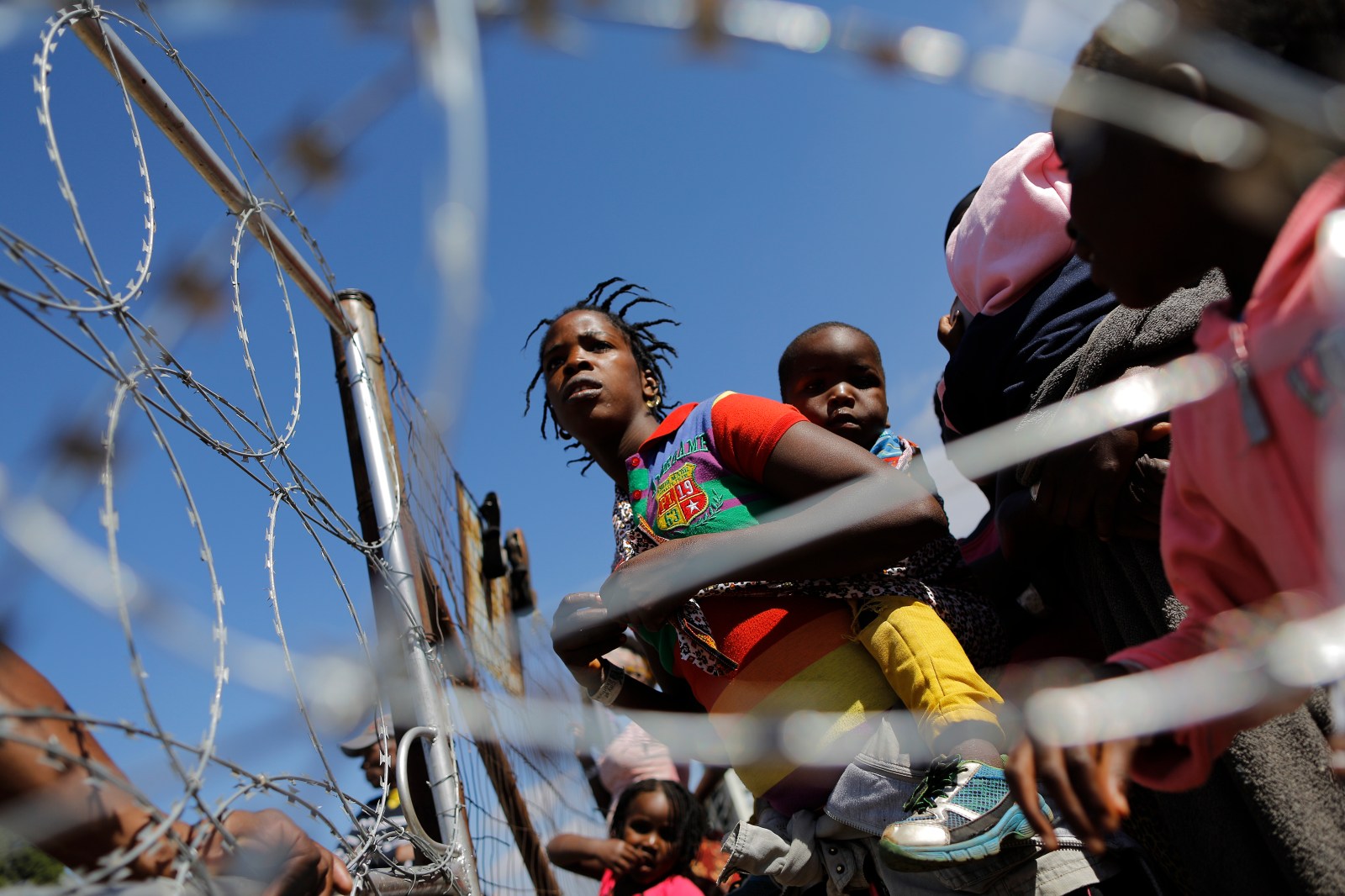 Mothers and children wait in line to be given food at a Red Cross refugee camp set up for foreign residents due to recent xenophobic attacks in the Primrose area of Johannesburg, South Africa, 20 April 2015. EPA/KIM LUDBROOK

There are more refugees in the world than there are people in South Africa. In 2017 UNHCR released statistics that showed that by the end of that year more than 68 million people (11.9 million more than the population of South Africa) would be “forcibly displaced worldwide as a result of persecution, conflict, or generalised violence”. And South Africa stands accused of amending legislation that amounts to the securitisation of migrants, turning migration into a national security threat.

Over the years, South Africa has made a number of amendments to its Immigration Act. Tweaks in the existing legislature have led to what has been termed the securitisation of migrants.

“In certain political situations, concepts become securitised, they become about security. Politicians convert agendas and frame them in security language. So, they will frame migration as a threat to national interest.”

This is the definition of securitisation offered by Ncumisa Willie, a research adviser at the South African Human Rights Commission and an immigration law textbook contributor, during a panel discussion hosted by the University of Cape Town on World Refugee Day.

The panel discussion was on the securitisation of migration and its impact on refugees.

“The first amendment which shows South Africa is moving towards a more securitised approach to migration took place in 2011 and made access to refugee asylum system difficult for refugees and asylum seekers,” said Willie.

The amendment was made to restrict or to reduce the period of the asylum transit permit which allows refugees to travel from border entry points to refugee reception offices.

The period permit was initially 14 days. The amendment then reduced this period to five days.

Willie listed a few reasons why it is unreasonable.

“Not only are they [refugees] vulnerable in terms of lacking social capital, often they don’t know the rules and the legal requirements of the country. Second, the ports of entry are not close to the refugee reception offices so this has financial implications when you fled with nothing but yourself.”

“We can see this has the implications of restricting access for asylum seekers,” she said.

The second amendment speaks to what happens when refugees are at the border post. The state tried to implement a pre-screening process in which the immigration officer would determine whether someone had a valid refugee claim. Willie said this poses the risk that people may be denied the opportunity to even apply for a refugee permit.

In 2016 South Africa launched a green paper on migration which was transformed into a white paper in 2017.

Willie argues that this lends a good perspective of where South Africa is going. Migration is framed as “a threat to national interest”.

She said that while it does acknowledge that migration comes with opportunity, “these opportunities can only be enhanced if you reduce the risks that are inherent in migration. So it calls for stricter border control, stricter access to both the immigration system and the asylum process”.

In an effort to further demonstrate how South Africa had securitised migration, Willie says, the white paper identified “weaknesses” in the country’s immigration and this is why it had implemented a strict immigration policy.

South Africa gives a section 22 permit, the asylum-seeking permit which allows asylum seekers the right to work and study. Willie says the white paper identified this particular permit as the one which is being abused because South Africa attractseda lot of migrants who are not necessarily refugees.

In an effort to assist more refugees, Aline Bukuru, from the Democratic Republic of Congo, founded Women and Children Concern (WCC), a non-profit organisation based in Cape Town.

“There is a lot to overcome when you come here. We help women, men, and children by offering different pieces of training,” says Bukuru.

WCC offers English classes and has a training programme where people are taught skills such as welding.

Talking about her own experience, Bukuru says, “When I first came to South Africa in 2008, I struggled. I would spend early mornings, as early as 4am, in a line at Home Affairs to get the right papers. I remember how difficult it used to be, having to return every six months, sometimes three months, to renew my papers.”

Bukuru is a mother and each time she would have to take her children out of school so they too could have the right documentation, “my kids would stand in the cold, it was tough times and no one was helping us”.

Bukuru says the lack of assistance for refugees drove her to start WCC.

“Only someone who has been through the long lines, cold nights and everything in between can understand the plight of refugees.

“Refugees go through a lot, security companies take advantage of us. Some people work for 10 years and one day they are told they no longer have a job because they don’t have the right papers,” she said.

“We go to the CCMA and they turn us away saying they can’t do anything. I was happy when I heard that not having up-to-date papers does not necessarily mean you are illegal in the discussion. Hopefully, the CCMA member who was here will tell her colleagues.”

Bukuru said when people host panel discussions such as this one, she wished that they would “talk less about migrants and refugees and more to them”.

Liesbeth Schockaert, project co-ordinator of regional migration for Doctors Without Borders, spoke about the challenges presented by the securitisation of migration and its impact on refugees.

“While it is not new, it is increasing, and I would say it goes together with containment policies and criminalisation of migrant persons and organisations that are aiding them.”

Illustrating Willie’s explanation of what securitisation is, Schockaert said:

She said the securitisation of migration allowed migrants to be seen as a security threat and eventually led to the criminalisation of those people who are looking for protection and a safe haven.

UNHRC reported that over three million people were awaiting a decision on their application for asylum by the end of 2017.

With over 40,000 people being forced to flee their homes every day Schockaert spoke on what they witnesed along migratory routes worldwide.

“We see places where people are contained against the will, people being detained and we see pushbacks. We see it in Europe, we see it in Australia.