Taking a stand against racism in schools 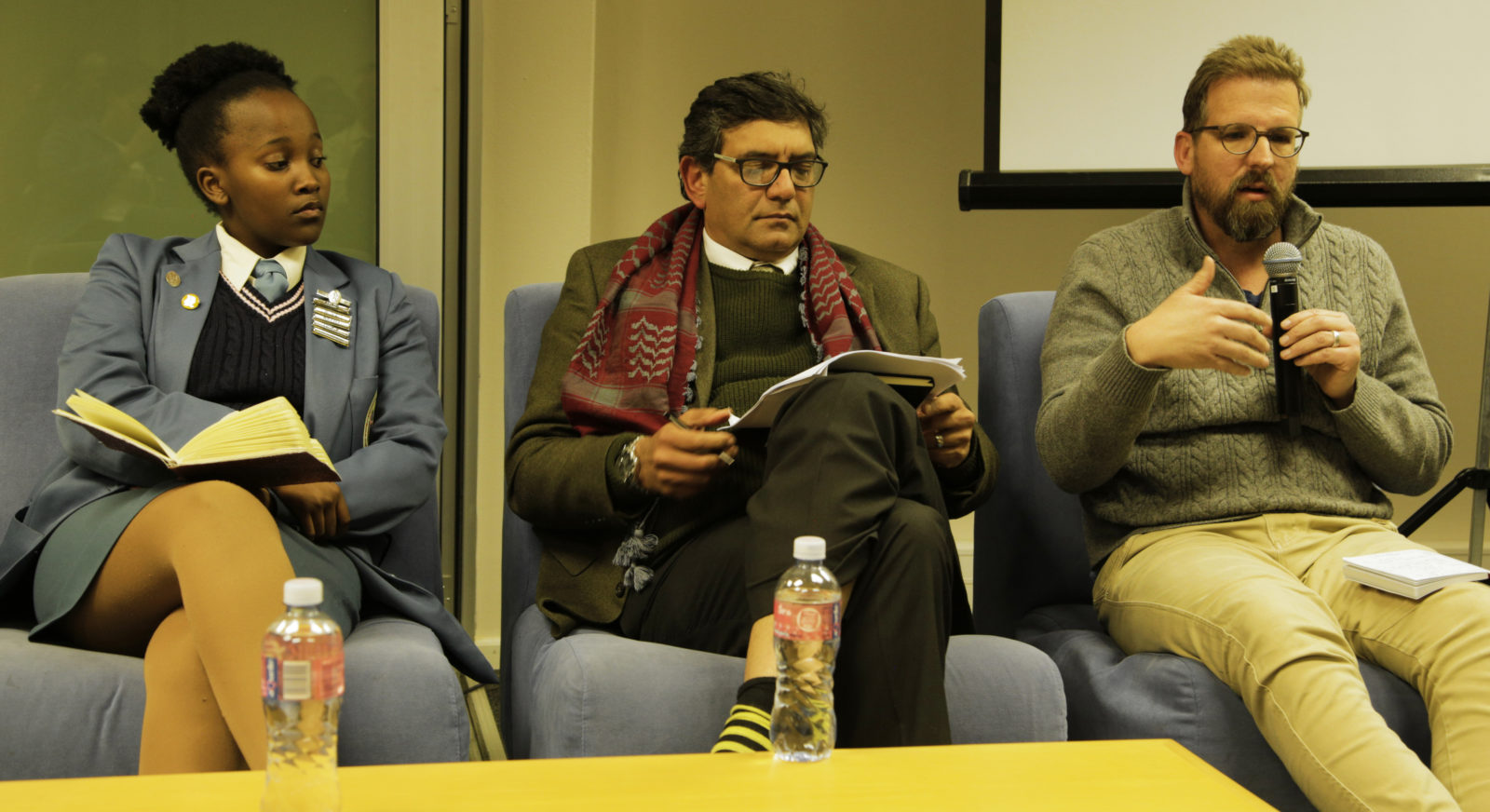 Panelists at the Race and racism in the basic education sector: Anathi Mngxekeza, Enver Hassen and Dylan Wray. Photo taken on 20 August 2018 by Aphiwe Ngalo

Those attending a roundtable discussion in Cape Town shared heartfelt personal experiences of their challenges with racism in schools. One grandparent said that her grandson has nightmares because he feels unwanted at his school.

Parents and grandparents at a roundtable discussion on Race and Racism in the Basic Education Sector last week spoke of their anger and frustration on hearing about their offspring’s trials and heartaches at school.

The discussion was hosted by the Institute for Justice and Reconciliation (IJR) in Cape Town. It formed part of the IJR’s Anti-Racism Project which seeks to eliminate racism in South African schools and communities.

“It is an insult when teachers say that they do not see race,” said Nokuzola Makosana, whose grandson goes to a predominantly white school in Cape Town.

“My seven-year-old grandson was bullied in school and the teachers denied it, they said ‘no, these kids were just playing innocently’.”

He was told by the Grade 2s that he wasn’t welcome at the school because he has dark skin.

“They locked him up in the toilets, they kicked him between his legs and did other nasty things.”

“The other night I woke up and he was shaking in his sleep. When I complained, they (the school) made it seem like (my complaint was) unnecessary,” added Makosana.

Lucretia Arendse, who spoke on behalf of the Anti-Racism Project, said most teachers were not equipped on how to handle racism at schools.

The Anti-Racism Project embarked on a two-year mission, speaking to about 60 teachers in each province of the country, offering support on how to deal with incidents of racism. The project found that there were not enough social workers in the more disadvantaged communities, with some communities having one social worker for 20 schools in that district and teachers often don’t know how to offer emotional and psychological support for racism incidents.

The report also found that schools are still adapting to having a multiracial group of learners and teachers in post-democracy. Because the teachers are of an older generation, they are dealing with their own scars from apartheid which often makes it difficult for them to speak about discrimination.

Arendse said teachers found it difficult to change the mentality of children who make racist remarks because their perceptions are influenced by what they hear from their families at home and their communities.

“Children don’t want to be disrespectful to their parents so they are scared of standing up to them and telling them that is racist,” said Arendse.

Participants at the gathering shared personal experiences of racist incidents at schools, and also those of their children.

Makosana said that black children are constantly exposed to racism in ex-model-C schools and private schools. When parents and guardians complain, their grievances were often downplayed. Makosana said that racist attacks are seen as just another children’s quarrel on the playground.

She also said that the school that her grandson attends refused to allow her to sit on the Student Governing Body (SGB) because she was vocal about the racism in the school.

“They found a clause that said that only parents and guardians of the children may sit on the governing body so I wasn’t allowed even though I was voted in,” she said.

Makosana said that black school kids struggle to find role models at former model-C schools and private schools because there are few black teachers. In most cases, black people are only employed in support staff positions and are often treated with contempt.

“This thing of them putting these children on the waiting list for so long is wrong. They don’t want our children in these schools.”

Tariro Wafawarowa, a student at Bergvliet High School, said that the narrative of “window dressing” was often adopted at schools. Wafa said that he had two experiences where he was cajoled into the reconciliation process prematurely after a racist attack, and he felt that he was not allowed to let out his frustration. That created built-up anger.

Arthur Mngxekeza, whose daughter is a matric student and was also a panelist at the discussion, said that as a nation we need to decide how severely we are willing to punish school children who are racist.

“There was a child who was saying that some people think apartheid was all bad. He decided to reserve his comment because he is used to hearing such things at the dinner table, from his family. Do we kick that boy out from the school? Do we break him by expelling him? Do we treat racism as a crime? Because if a black boy steals he is a thief, but if a white boy does the same thing, he has kleptomania.”

Racism at schools is also influenced by racism in communities and at home.

Enver Hassen, who is Head of Learner Support in the Metro Central Education District, said we are having the same conversations on racism in schools 24 years into democracy.

Hassen said that most incidents of racism in schools are swept under the rug to avoid a bigger conflict.

“It is very important that incidents of racism in schools are reported,” he said.

Hassen also said that the department of education was working to supply psychological support to learners who go through such incidents because it can affect their performance at school.

“Schools need to provide a sense of belonging to their learners, there should not be discrimination in terms of race and class. The racism at schools is shaped by the reality of racism in our communities, that people come from different worlds. We need to work together to eliminate this, SGBs, teachers, students and the department.” DM