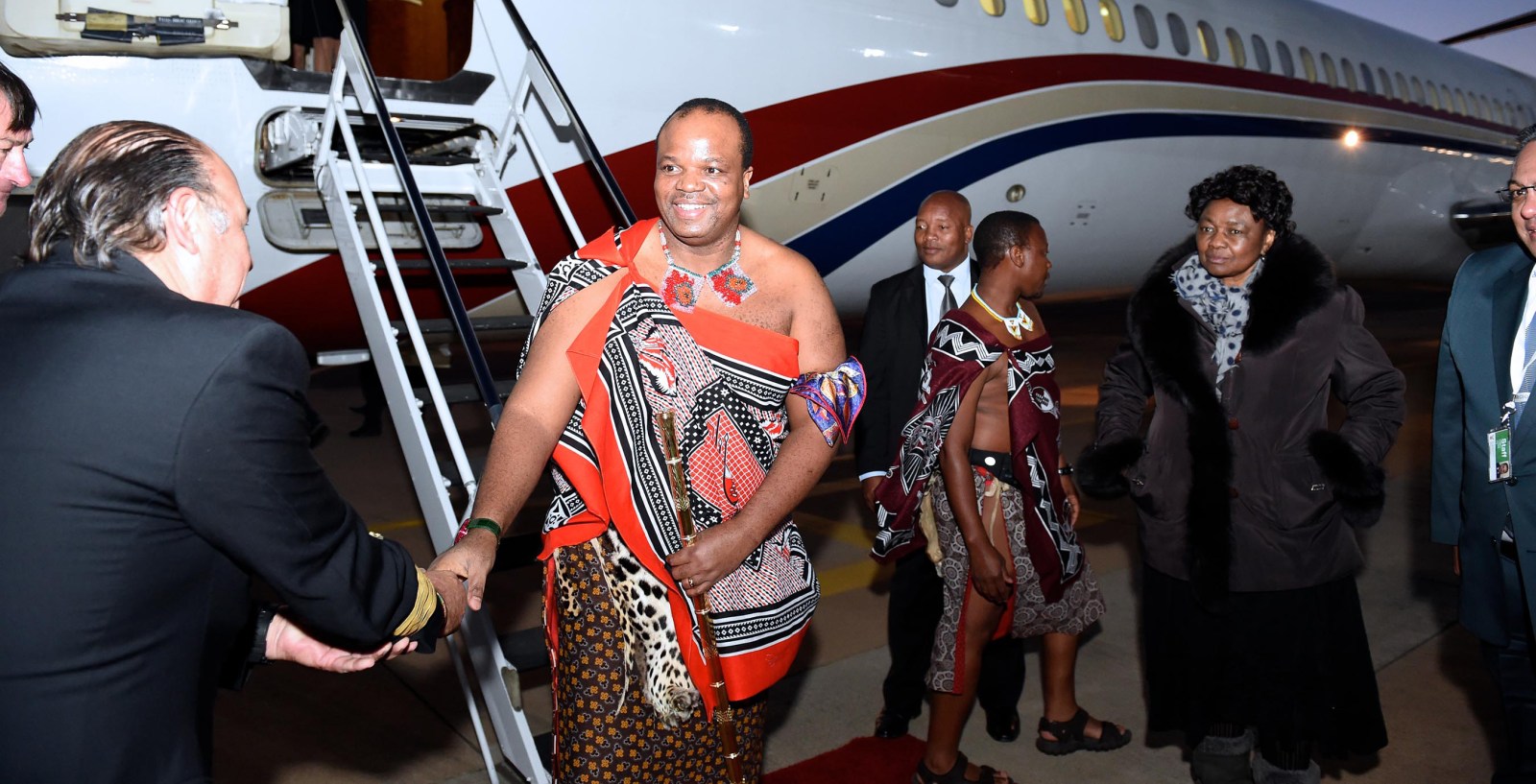 King of Swaziland, King Mswati III arrives at the Waterkloof Airforce Base in Pretoria, for the 37th Ordinary SADC Summit. 17/08/2017; photo: Yandisa Monakali

With only about a month to polls, an eSwatini (Swaziland) political party is going to court to fight for the right of individuals running in the absolute monarchy’s unusually apolitical elections to openly and freely associate with the party of their choice.

In July, a small team of lawyers was turned away from the high court in Mbabane on technicalities. They didn’t have a chance to argue their case for the right of candidates running for office in the upcoming elections to be allowed to publicly associate with a political party.

On Tuesday they’re back in the Eswatini capital, this time before the Supreme Court, for a second try. They have asked to re-argue their original case on behalf of the Swazi Democratic Party (Swadepa), led by former trade unionist and activist Jan Sithole. The primary elections in the landlocked country of 1.3 million people took place on Saturday, and campaigning for the secondary elections, set for 21 September, is just kicking off now.

In their heads of argument in the appeal, Swadepa, its secretary-general Mbongiseni Shabangu, and Sanelisiwe Dlamini from the party’s women’s league, argue for three things.

These might seem like obvious components of an elections campaign, but the Eswatini government has argued that the country’s electoral system is tinkhundla-based and founded on individual merit as basis for election to public office, and as such there was no place for political parties within the system.

There are 55 tinkhundlas, or constituencies, based on traditional meeting places.

Several social movements and trade unions have called for the repulsion of a decree passed in 1973 by current King Mswati III’s father, Sobhuza II, which outlawed political parties, dissolved parliament and placed legislative, executive and judicial powers in the hands of the king.

The country’s 2005 constitution, however, contains provisions for the right to freedom of expression and association, and Swadepa’s case is based on this.

In a case brought by Sithole in 2008, the court held that “there is nothing in the constitution that debars a member of a political party from seeking election as an independent individual and, once elected, joining up with others who think similarly to operate as a unit”.

In an absolute monarchy, however, technicalities matter. Swadepa wants the court to clarify this issue because the 2008 case related to whether political parties could operate freely, but it did not relate specifically to the nature and extent of political party participation in electoral politics, or the extent of the rights of freedom of expression and association of candidates for election. In its heads of argument Swadepa and the two other appellants said they wanted “to ensure that candidates for election, political parties, and voters are able to exercise their constitutional rights”.

Without such clarification, “candidates who are members of political parties will err on the side of caution, as they have done in the past elections, and avoid mentioning their political affiliations, beliefs and policies, which will affect their prospects for election into public office”.

There are roughly 10 political parties in Eswatini.

Sithole, who founded Swadepa in 2011, argued in the founding affidavit of the case that the individual merits of many candidates were “inextricably intertwined with the achievements and policies of the political parties of which they are members”.

Sithole, who was elected in 2013 as MP representing the Manzini North Inkhundla, would be standing for re-election and, as the “face” of his party, he said many of Swadepa’s achievements were also his.

“He cannot be expected to campaign for re-election without reference to what he has done and achieved as president of Swadepa,” court papers argue.

“For him to do so would preclude him from presenting his full merits as a candidate to the electorate, and severely curtail his re-election campaign. This would result in a gross violation of his constitutional rights, and the rights of voters who are required to assess his merits as a candidate.”

Even the African Union agrees. After the 2013 vote, its elections observer mission said the disallowing of political parties in the electoral process meant the rights of association and assembly, guaranteed in Swaziland’s constitution, were not “fully enjoyed”. It urged the government to review its constitution to bring it in line with international principles for free and fair elections and participation as stipulated in the Durban Declaration on the Principles Governing Democratic Elections in Africa.

International observers were similarly scathing, with the Commonwealth Observer Mission recommending that the constitution be revisited through “a fully inclusive, consultative process with all Swazi political organisations and civil society to harmonise provisions which are in conflict … to ensure that Swaziland’s commitment to political pluralism is unequivocal”.

The Southern African Development Community’s stance on the elections was, however, notably less critical.

Two counsel from South Africa will be acting in Tuesday’s case. Advocate Jonathan Berger will be arguing the case for Swadepa, while Peter Hathorn is acting for Dlamini and Shabangu. DM