How Kenya is managing security 20 years after the Nairobi blast 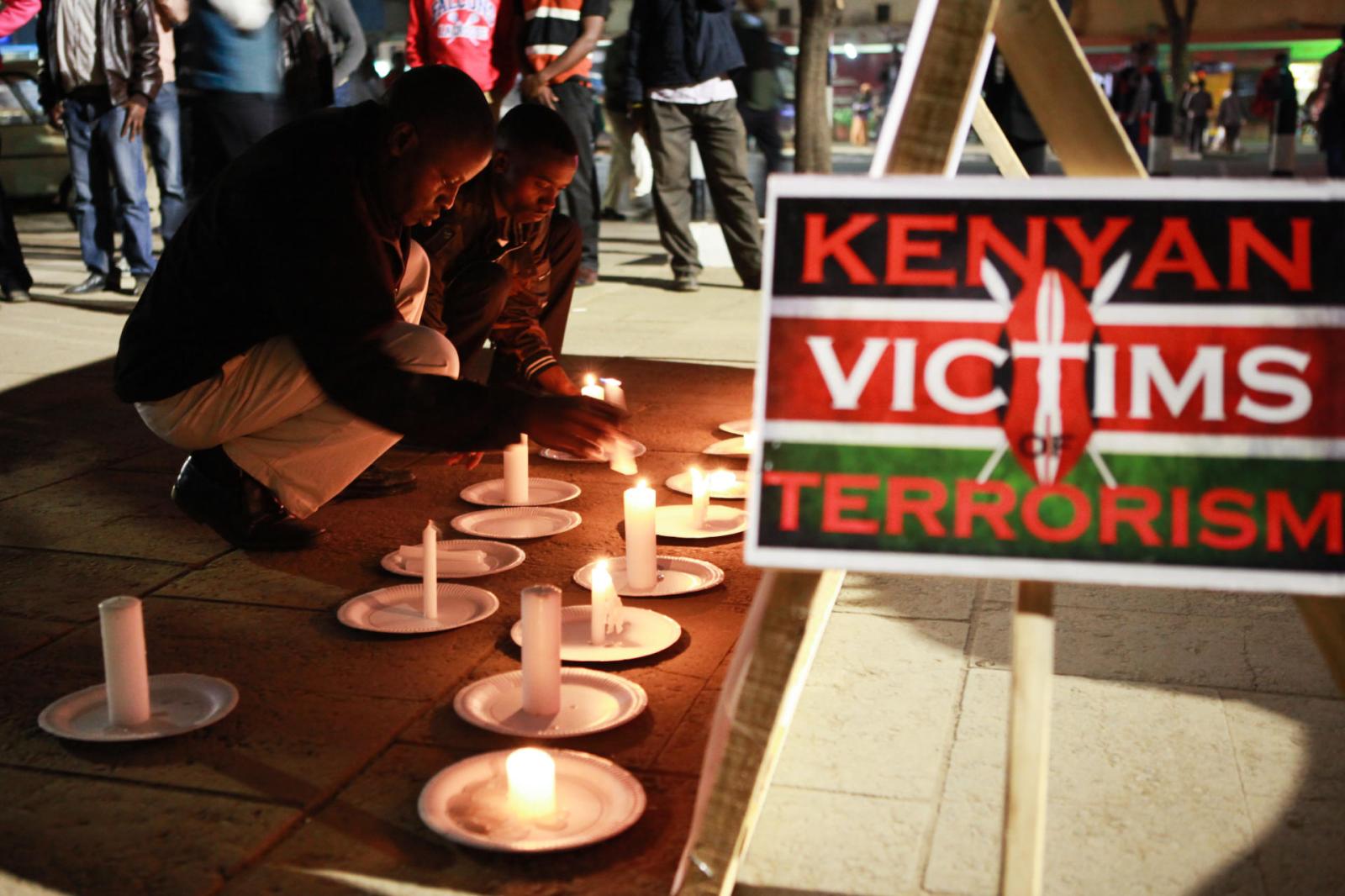 Kenyan members of the 7th August 1998 Bomb Blast Victims Association take part in lighting candles during a night vigil in Nairobi, Kenya, 23 July 2015. Protesters gathered outside the August 7th Memorial Park a day before the visit of US President Barack Obama to demand compensation from the US government for the 1998 bombing of the US embassy that killed over 200 people, including US nationals. EPA/DANIEL IRUNGU

Kenya still has a long way to go before it fully manages the threat of terrorism. Despite the strategies it’s put in place, the country’s counter-terrorism efforts have been hampered by three key interrelated factors. These are a lack of cooperation between agencies, corruption and the radicalisation of Somalis. By Oscar Gakuo Mgwani for The Conversation.

First published in The Conversation

It’s been 20 years since the attack on the US embassy in Kenya’s capital Nairobi. A suicide bomber detonated two truck bombs killing 200 people. A simultaneous attack happened in Dar es Salaam, Tanzania.

Terrorist attacks in Kenya date back to 1975. Prior to the country’s military intervention in Somalia in 2011 they had claimed about 300 lives. In the post-Somalia intervention period – 2011 to 2016 – attacks led to over 800 deaths, and more than 1200 injured. Approximately 75% of the attacks were conducted by the Somalia-based al-Shabaab terrorist group.

My research shows that several factors have contributed to al-Shabaab’s attacks in Kenya. These include the country’s proximity to Somalia, the visibility of US and Israeli interests, and Kenya’s role in the US-led global war on terrorism.

But most notable is Kenya’s military intervention in Somalia aimed at reducing the threat posed by al-Shabaab.

The frequency and intensity of al-Shabaab’s attacks prompted Kenya to prioritise the development of counter-terrorism policies and strategies. These hinged on several elements including legislation, law enforcement and border security. Efforts were also stepped up to counter the financing of terrorism and extremism. And there was added focus on international and regional cooperation.

But are all these efforts working?

Kenya still has a long way to go before it fully manages the threat of terrorism. Despite the strategies it’s put in place, the country’s counter-terrorism efforts have been hampered by three key interrelated factors. These are a lack of cooperation between agencies, corruption and the radicalisation of Somalis.

Before 2010, Kenya’s efforts were hampered by the absence of a legal framework to prosecute acts of terrorism. Since then it’s passed several new laws. These include the Prevention of Terrorism Act, Proceeds of Crime and Anti-Money Laundering Act and Prevention of Organised Crime Act.

The act also strengthened the mandates of the Kenya Defence Forces and the National Intelligence Service. These security agencies now have the constitutional and legislative mandate to take counter-terrorism measures to safeguard national security. Some are repressive and punitive. For example, the Anti-Terrrorism Police Unit has been accused of using excessive force.

Terrorist screening watch lists, biographic and biometric screening, and other measures, are also in place at Kenya’s main ports of entry. But screening procedures are sometimes inconsistently or minimally applied. This is particularly true at smaller border posts and airports.

To counter the financing of terrorism, Kenya joined the Eastern and Southern Africa Anti-Money Laundering Group. This is a financial action task force whose objectives are to set standards and promote the implementation of suitable measures to combat money laundering, terrorist financing and other threats to the international financial system. The government also implements the relevant UN Security Council resolutions on money laundering and terror financing.

Kenya’s financial intelligence unit – the Financial Reporting Centre – continues to build its capacity to monitor the formal financial system. All non-governmental organisations are required to report suspicious transactions to the centre.

Two years ago the government launched the National Strategy to Counter Violent Extremism. The aim was to step up efforts to counter violent extremism by dealing with the radicalisation of young people. It was also designed to encourage efforts to rehabilitate, repatriate, and reintegrate foreign terrorist returnees. A number of civil society organisations, such as Haki Africa, are now addressing radicalisation and violent extremism in the country.

Kenya is also involved in international and regional co-operation. It’s an active member of the AU (African Union) and a member of its Peace and Security Committee. The country also contributes troops to the AU’s mission in Somalia.

Kenya also remains engaged with the Intergovernmental Authority on Development and is a member of the Partnership for Regional East African Counter-terrorism.

Most of Kenya’s international counter-terrorism assistance and co-operation comes from the US, UK and Denmark.

To make serious progress, Kenya must urgently address the three big issues: a lack of co-operation between agencies, corruption and the radicalisation of Somalis.

The lack of collaboration was evident in the Westgate Mall attack in 2013. The counter-terrorism offensive was lacking thanks to inter-agency conflict. This blurred the lines between command and control. There was a breakdown in intelligence sharing, and patchy communication between the security forces and the public during particular stages of the siege.

Corruption is also a serious threat. Bribery is rife in the security sector, particularly the police service.

Counter-terrorism efforts have also been hampered by the branding of all Somali refugees in Kenya as a security risk. Somali refugees, and refugee camps predominantly occupied by Somalis, are misleadingly described as abetting terrorism. This has allowed the state to normalise counter-terrorism measures among refugee populations.

As a result, the rights of Somali refugees have been repeatedly violated. The effect of this, combined with the impact of corruption and the securitisation of refugees, has led to an increase in the numbers of young people being radicalised.

This is particularly true in the Muslim community. Many are rapidly joining extremist groups such as al-Shabaab, and posing a serious threat to Kenya’s future security. DM