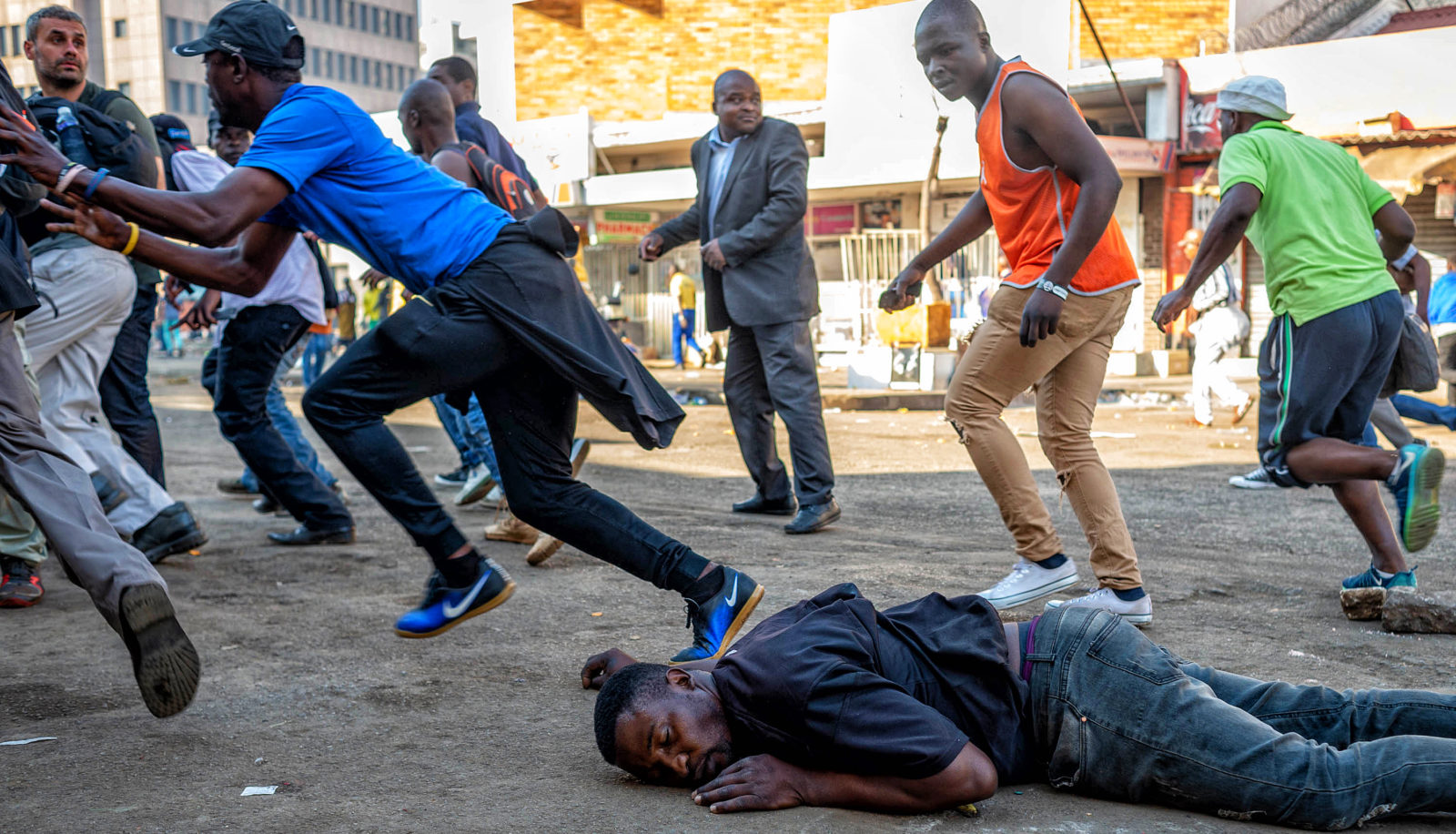 A man who was shot in the back by a live round fired by the Zimbabwean Army lies on the ground bleeding during a protest against the vote count in Harare, Zimbabwe, 01 August 2018. EPA-EFE/YESHIEL PANCHIA

On the eve of the Zimbabwe Electoral Commission’s announcement of the outcome of the contested presidential results, Harare’s central business district was barely recognisable, yet familiar, as it bore a semblance to the kind of violence incited during the Mugabe era.

On the afternoon of 1 August, 2018, six people were murdered and another 14 seriously injured by the Zimbabwean National Army (ZNA) – a prime branch of the Zimbabwe Defence Forces – who opened fire with live ammunition on unarmed civilians.

This was done in plain sight of international media – some of whom were targeted – and a stone’s throw from international observers who had just cautiously approved the harmonised election. On that fatal afternoon – which can be viewed as Zimbabwe’s Marikana moment – familiar feelings of hopelessness, fear and intimidation, which had been compartmentalised by most Zimbabweans in the run-up to the election, resurfaced.

In response to this, the 2002 Protection of Order and Security Act (POSA), which further limited citizen freedoms, was immediately invoked. Adding to this, the harassment of international media by riot police on 3 August while trying to cover the MDC Alliance’s Press Conference highlighted tensions in the aftermath of the announcement of the presidential result.

Moreover, on the evening of 3 August, reports emerged of continued army intimidation in high-density suburbs such as Chitungwiza and Kuwadzana. These events, coupled by the Zimbabwean police surrounding the home of the mother of Tendai Biti, a senior member of the MDC Alliance, revealed the state of dysfunction that the country had fallen into.

The events of 1 August, and those that followed, unearthed the painful reminder to Zimbabwean citizens that though the face of the tyrannical system had been removed in November 2017, the disposal of the systemic carcass was going to be a larger task than had been originally conceived by the ordinary person.

Merely staging elections and awaiting a credible outcome had proven inadequate in reversing the omnipresent structural violence and subsequent trauma experienced by the people of Zimbabwe. Suppressed memories of physical and systemic violence, though compartmentalised by most citizens as remnants of the Mugabe era while imagining the prospects of a new Zimbabwe envisioned for the post-electoral period, reared their ugly head once more to haunt citizens in the present.

It was a painful reminder that the country’s euphoria in the immediate period after the end of the Mugabe era was premature. This state of hope only compartmentalised the trauma and pain that needed to be revisited and unreservedly addressed if the country was to break the cyclical patterns of trauma. The task of rebuilding the emotional health of the nation is paramount.

The state of affairs in Zimbabwe cannot be addressed without examining the legacy of citizen trauma and state denialism, as these factors continue to affect ordinary life on the ground.

Unaddressed issues – ranging from a lack of access to basic human rights such as housing, education, fresh running water and healthcare, to the systemic violence and pillaging of resources that has left the country’s economy in tatters, forcing many to seek opportunities elsewhere and often tearing families apart – continue to shape the realities of Zimbabweans. For almost four decades, these triggers, encased in fear and despondence, have rendered Zimbabwe a traumatised nation.

Trauma as a term is often subject to loose interpretation and application. It is, however, centred around violent or shocking events in life which stay as subconscious reminders for victims and possibly their offspring, as well as broader society. The cyclical engagement of trauma through conscious and unconscious triggers is one which is necessary to understand the relationship between historical and structural trauma – the direct and socialised forms of trauma respectively, that haunt experiences at individual, collective and intersubjective levels of human engagement.

Socialised traumas manifest through silence narratives, which continue to be preserved by the transferral of repeated historical trauma or triggers of physical violence or systemic provocation. It is then mirrored in the lives of subsequent generations and can thus be found in varying forms throughout all sectors of society. The anxiety faced in structural trauma reverts to the fear of reliving historical trauma.

For Zimbabwe, the fear of historical trauma renders itself not a distant event, but a part of everyday lived experiences. Historical trauma has thus become naturalised into society and remains omnipresent. The election was a time to mend this. Riding on the re-energising of ousting former President Mugabe, Zimbabweans took to the polls on 30 July in order to vote for change and begin the process of undoing the historical trauma they continue to face.

The post-electoral violence experienced in Zimbabwe revealed the dangers of plastering over the mythical narrative of peace during the elections. There is no true peace in the presence of a volatile and traumatised state. Even if the election results were not contested, the silencing of the lived realities would have produced an unsustainable negative peace. Memory does not forget subconsciously placed trauma – particularly when the oppressor bears a familiar face. Zimbabweans cannot afford to keep letting “bygones be bygones” and heed calls to accept the election if the anxiety of possible further trauma exists.

Worse still, acts of violence committed since Zimbabweans went to the polls further confirm their suspicions that the same violence is being carried over from the Mugabe era. Events served as an unmasking of a military outside the barracks thwarting prospects of change and exposed the realities of the November 2017 intervention. If President Mnangagwa and the acting government keep bringing armed forces to the fore, the people of Zimbabwe will not accept his incoming government.

Moreover, the international broadcasting of events on the ground coupled with the use of social media to swiftly disseminate unbiased information taints President Mnangagwa’s peace and unity rhetoric that has been heard over the past few days. Triggers of violence experienced in other countries becomes relatable to those within the Zimbabwean situation, causing apathy and mistrust even within the international community that the president so desperately needs to prove himself to.

Regardless of the outcome of the MDC Alliance’s contestation of the presidential result, there needs to be a follow-up on the violations of the National Peace and Reconciliation Commission’s peace pledge signed by all political parties and candidates on 26 June, 2018. It is time for Zimbabweans to hold accountable those that pledged to refrain from and disassociate themselves from “violence, coercion, intimidation… and any other electoral malpractices”, yet violated that pledge.

This remains as an immediate bone of contention in the post-electoral period, which need to be thoroughly investigated by relevant bodies and revealed to the public. If left unaddressed, the consequences shall be an apathetic citizenry that defaults to managing their socialised trauma possibly causing, among other ripple effects, further brain drain from the southern African nation. The result will be a lack of trust in leadership should the situation continue, thus causing an even bigger problem for legitimacy.

Those in charge have, from 1 August, and the days which ensued, shown that efforts to sanitise themselves and legitimise their ascension to power through the denied military coup of November 2017 are yet to be given credence. Should the elected government seek legitimacy, the post-electoral violence that ensued from the fateful afternoon of 1 August will have to be dealt with delicately.

Here, discrepancies between section 37 of the constitution which the police used to justify military intervention contrary to section 213, which dictates circumstances (“only the president, as commander-in-chief of the defence forces”) under which the ZNA can be deployed must be clarified and answers must be given to the people. In addition, the role of civil society organisations remains critical to upholding accountability and in lobbying for unbiased inquiry where the rule of law should be respected regarding Zimbabweans’ constitutional rights to life, to congregate, and other such freedoms.

Parallel with this, the army should be sent back to the barracks to legitimise a civilian government rather than a military one. Should these immediate points of contention remain unaddressed, they will continue to overshadow Mnangagwa’s presidency both at home and abroad. DM