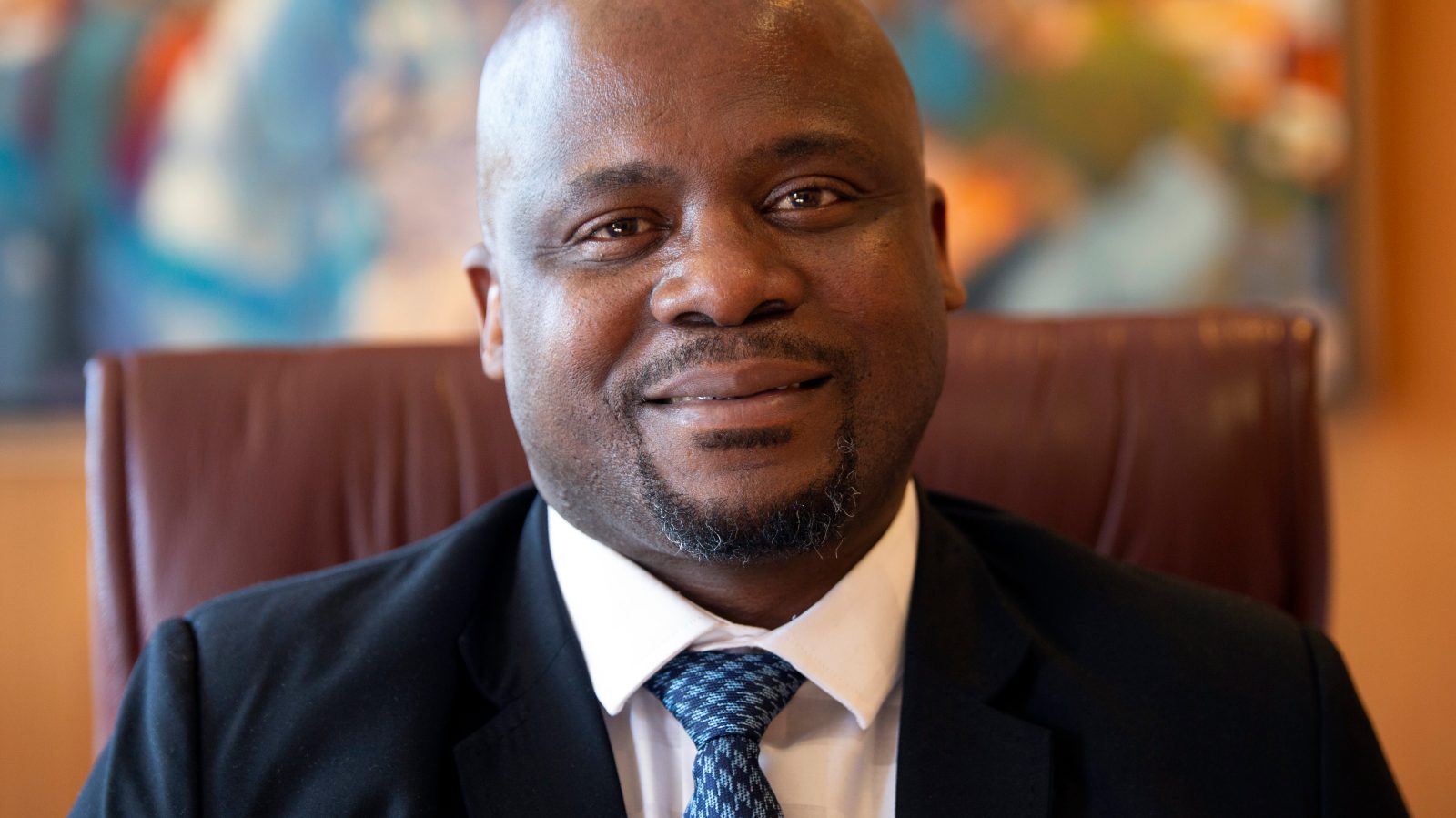 In the midst of challenges and campus conflicts, Cape Peninsula University of Technology has finally appointed a permanent vice-chancellor, Dr Chris Nhlapo. He sat down with Daily Maverick this week to talk about his rural past, the higher education institution and impact of #FeesMustFall.

Newly appointed vice-chancellor of the Cape Peninsula University of Technology, Dr Chris Nhlapo, grew up on a farm and used to walk kimometres to school in the 1970s. It left him with a profound respect for education.

The new head, who is charged with navigating the campus to stability, grew up in Paul Roux in the Free State.

“If a poor student from a poor and unknown rural area — like myself — can be a somebody, it’s very, very important that that person takes education seriously. We should not allow students to play with education,” said Nhlapo, during an interview with Daily Maverick at his office at the Bellville campus.

Nhlapo,now 52, started school at the age of nine, but that didn’t stop him from getting ahead. He went on to study at the then Potchefstroom University which he described as a “challenge” because the university was an Afrikaans medium institution and his home language is South Sotho.

“Before I left the institution, I could actually speak Afrikaans, I could teach in Afrikaans,” said Nhlapo, who is a qualified physical sciences teacher with an Honours and Master’s in chemistry.

Nhlapo holds a PhD from Potchefstroom University. He was head of Chemistry at the then University of the North and the Free State before joining the National Research Foundation (NRF) as a research manager.

He joined CPUT in Feruary 2008 as deputy vice-chancellor in charge of Research, Technology Innovation and Partnership.

Since October 2017, Nhlapo has been acting vice-chancellor, but after two other candidates were interviewed during an open livestream in June, Nhlapo was elected by the university’s senate to become CPUT’s third vice- chancellor since its inception in 2005. CPUT is the only university of technology in the Western Cape — and has the most enrolled students in the province with more than 34,000 students across six campuses in the province.

Following #FeesMustFall protests between 2015 and 2017, the university faces a huge task of turning around its image after extensive damage to its Bellville and District Six campuses.

During the interview, Nhlapo discussed the lingering issues CPUT still faces after the protests, including several buildings damaged by fire — one building, the St Marks Anglican Church, situated on the institution’s District Six campus, was petrol bombed, allegedly by students in September 2017. Nhlapo described the petrol bombing of the known anti-apartheid church as a “sheer criminality”.

When asked by Daily Maverick whether or not there should be a TRC for students who were arrested during fee protests, he did not directly answer. Nhlapo said students were not excluded based on their participation in #FeesMustFall per se. “I think that we must dispel and be clear about that”.

Nhlapo explained that some cases were criminal activity and CPUT was not the sole complainant in such acts — the state was too: “Take for example, a burning of a bus, and other public violences out there — those are things that some of them are, or the possession of explosives — because those were some of the cases actually laid by the state.

“Some of the cases were of assault, so really, those are sheer criminal cases, but we don’t have cases where we can actually say students have been arrested for protesting… but malicious damage to property… all those particular aspects, arson like the St Marks Church in Cape Town, those are sheer criminal elements and I think we’ll be running against the grain of the Constitution if we say we’ll go out and interfere with the legal system.

“And say that now we’re going to have a TRC — we don’t want to intervene. It’s up to the state, and if the state wanted to withdraw the charges, we won’t get involved.”

During 2017, classes were disrupted on numerous occasions by students protesting over a lack of accommodation at campus residences and calling for the removal of former vice-chancellor Dr Prins Nevhutalu who resigned in 2017, after an internal disciplinary hearing found him guilty of gross misconduct as reported in the Mail & Guardian.

And Nhlapo’s views on the fees movement?

Nhlapo agreed with the issues raised during student protests, describing them as “very very important, issues that relate to decolonial education” but he told Daily Maverick: “I want students to go deeper, because a lot of students were raising the matter of decolonisation, but they were not going beyond that, so we should actually go beyond that and not really sloganise.”

Nhlapo said important issues such as emancipatory education, transformation of education and the decolonisation of knowledge production were serious matters and “I really don’t have a problem with that”.

How does he feel about being appointed as vice-chancellor?

“Personally, I’m excited about it. I’m thrilled to be the third vice-chancellor of this massive institution… But I’m also aware of the responsibilities on my shoulders, I don’t take that lightly.” DM

Read previous articles about CPUT and its challenges here and here

Suné Payne graduated from CPUT in 2017. She studied journalism at the institution’s District Six campus between 2015 and 2017, as the #FeesMustFall movement spread across the country