Cape Peninsula University of Technology: Case study of a campus in crisis 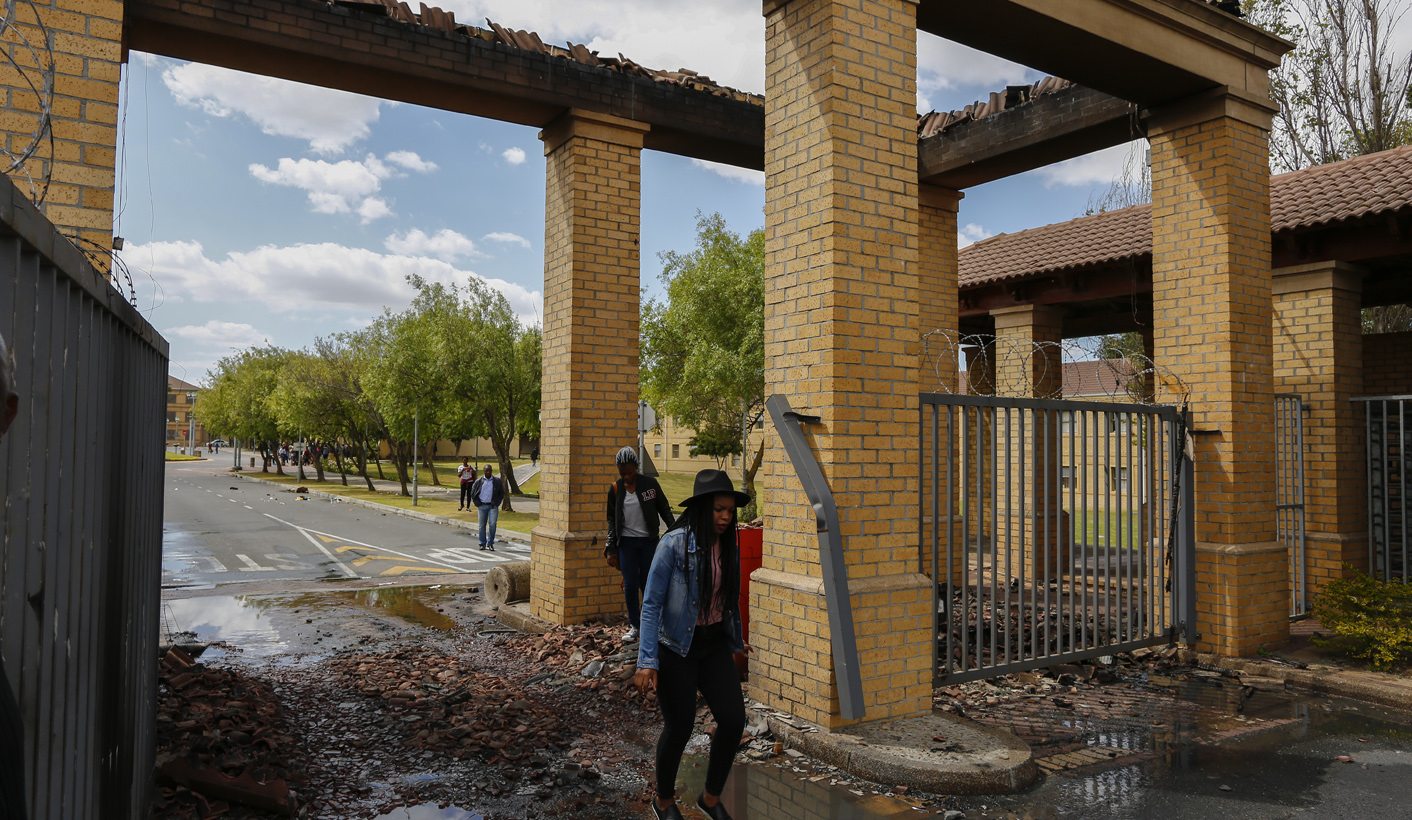 The government’s report on funding for higher education has not been made public yet, but already tensions are brewing on university campuses once again. A particular pressure cooker has been the Cape Peninsula University of Technology, where violent protests have been occurring over the last few months. On Tuesday, the campus was shut down. What’s happening at CPUT exhibits now familiar features of South Africa’s student protests. By REBECCA DAVIS.

On Tuesday, the campus of the Cape Peninsula University of Technology was in a state of suspended animation. Academic activity had been cancelled for the day following violent protests on Monday, and private security was on hand to keep the public out.

A guard shrugged when asked when the university’s Student Centre might reopen. “We’re waiting for feedback,” he said. On the glass doors of administrative buildings, various legal notices were affixed. One was an old interdict barring four protesters – Ayakha Magxothwa, Sivuyise Nolusu, Leo Mongale and Lukhanyo Vangqa – from entering the premises. The “CPUT 4”, as they have become known, have attained martyr status in some quarters.

Piles of burnt rubble were strewn around the entrance to the campus Engineering faculty: a relic of the previous day’s activity. A small group of protesting students marched through it on Tuesday. “I would rather die standing up than live life on my knees,” one placard read. “#FeesMustFall! #CPUT4 is back!” read others.

Around the campus amphitheatre, protesters, police and private security faced off. “Arrest me, I’m a criminal!” one student taunted police. The previous day, stun grenades and pepper spray had been used to disperse students who threw mattresses, bedding and bookshelves from the balcony of a university residence.

University offices on Roeland Street were reportedly broken into on Monday night, with doors kicked down by intruders described as “very young”, in search of expensive electronic equipment. This is not the most extreme act of destruction thus far: last month the famous St Mark’s Anglican Church of District Six, adjacent to CPUT, was petrol bombed. A university workshop was also destroyed, with some students allegedly losing their whole year’s portfolio of art and design work.

Amid such chaos, it is hard to determine which actions have been carried out by student protesters and which by criminals not affiliated with the university.

A staff member who spoke to Daily Maverick on condition of anonymity cited the Monday night break-in as an example of “criminals taking advantage” – but noted that some student protesters have also used violence. She said that some have taken to carrying around rocks concealed in socks to use as weapons.

“There is allegedly a [CPUT student] squad called ‘Boko Haram’ who go around using violence and intimidation,” she said.

CPUT spokesperson Lauren Kansley told Daily Maverick: “We have always maintained that the group behind the violent destruction is a small militant group of criminals, made up of protesting students and a small amount of insourced workers who are determined to make the university ungovernable in an attempt to pursue their own agenda.”

Kansley added: “Keep in mind that CPUT has in excess of 34,000 students, so 500 protesting students are in the extreme minority.”

Central to the mobilisation of the student protesters have been the so-called #CPUT4. The four students were suspended at the end of August after forcing their way into a university council meeting and threatening to burn buildings. Described by the staff member as “highly influential”, the #CPUT4 were readmitted to the university this week subject to a 12-month suspended expulsion. In other words, if they are found guilty of disrupting activities within the next year, they may be expelled.

CPUT’s Kansley said that the university views the outcome of the disciplinary hearing as “a step in the right direction”, adding: “We will remain resolute on the fact that a firm stance on student discipline must be maintained for the greater good of all.”

In the view of the staff member, however, the university may have been over conciliatory towards protesters in the past, with violent tactics now seen as an effective method for students to win concessions from the institution.

“Now it’s an ego stand-off between students on the one hand and management on the other, with the staff in the middle literally held hostage,” she said. She commented wryly that university management recently sent out an advertisement to staff offering “riot cover” insurance for R20 a month from a private company.

The issue of student fees looms large in the CPUT student demands, but is by no means the only source of contestation. As has been the case since the outset of the national protests in 2015, workers’ rights are also on the agenda. Ironically, the securing of staff insourcing – one of the successes of past protests – has now become a bone of contention.

“Part of the issue is that management didn’t explain to staff workers what the effects [of insourcing] would be,” explains the staff member. Workers apparently did not realise that their take-home salaries would drop when their status changed from outsourced workers to insourced, supplemented by benefits which are seen as intangible and irrelevant.

Kansley maintains that university management has engaged “tirelessly” with student demands since 2015.

“As a result, a number of encouraging steps were taken: for instance, insourcing, and the pardoning of R111-million in student debt,” she said. “At this stage management is looking forward to engaging with legitimate student structures to see an end to this crisis.”

But CPUT management is in itself in crisis, with most significant posts being filled by “acting” individuals and CPUT vice-chancellor Prins Nevhutalu being found guilty of “gross misconduct” by a disciplinary committee last week.

“There’s a whole lot of stuff happening at CPUT that has nothing to do with fees,” says the staff member. “It feels like a township university. The aircon doesn’t work, to give one example. The lights could literally fall on you while you’re lecturing. Staff morale is probably at the lowest it’s ever been, to the point where people actually don’t care about the legitimacy of the student protest because we’re just tired.”

She points out, too, that CPUT’s challenges consistently fail to attract the attention afforded to better-resourced institutions.

“No one cares about CPUT. That’s the thing. Students shut down UCT for an hour and it’s headline news. Here it’s a mess, and – nothing.”

The staff member warns, however, that the public can ill afford to ignore the reigniting spate of student protests.

Photo: Students walk out of the burned and damaged entrance to the Cape Peninsula University of Technology’s (CPUT) Bellville campus after it was torched overnight during student protests, South Africa, 12 October 2016. EPA/NIC BOTHMA