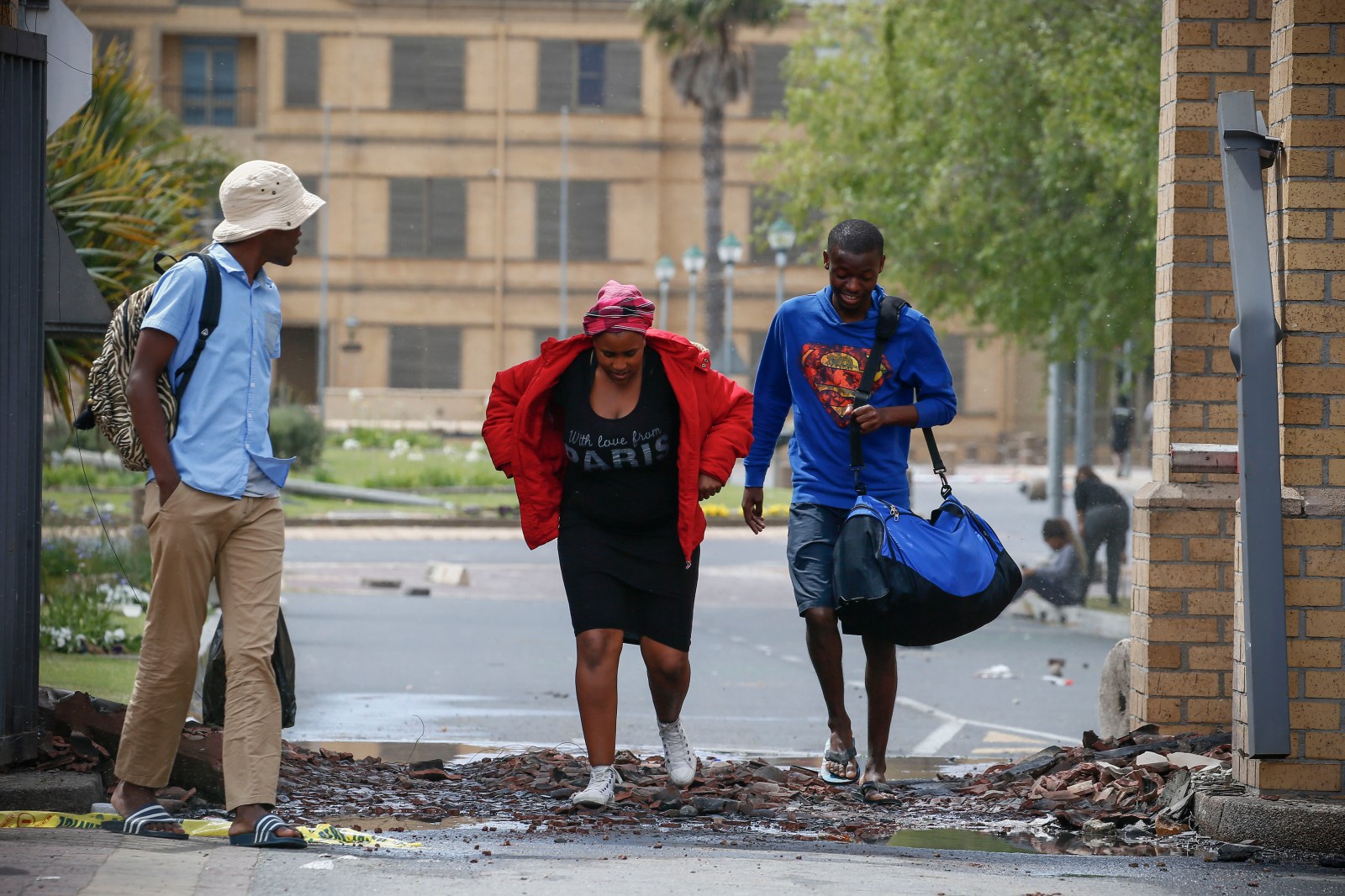 Students walk out of the burned and damaged entrance to the Cape Peninsula University of Technology?s (CPUT) Bellville campus after it was torched overnight during student protests, South Africa, 12 October 2016. Photo: EPA/NIC BOTHMA

Cape Peninsula University of Technology has seen violent protests since 2015. For the past six months, the university has struggled on without a permanent vice chancellor but its a post desperately needed to be filled, Parliament heard on Thursday.

A permanent vice-chancellor would be appointed at the troubled Cape Peninsula University of Technology by September 2018, the campus’s council told Parliament on Thursday.

The university council was called to Parliament’s portfolio committee on higher education after it had failed to show up at an oversight visit by the Parliament committee in March.

The university, the largest in the Western Cape with around 34,000 registered students, has seen fees protests in 2015 and 2016 and then sporadic violent actions between students and private security personnel at its Bellville and District Six campuses during 2017, leading to classes being suspended several times.

“We are in the process of appointing a vice-chancellor,” said Nogolide Nojozi, CPUT council chairperson.

Both MPs and council members agreed that the appointment would help bring stability to the institution.

CPUT has been without a permanent vice chancellor since the resignation of Dr Prins Nevhutalu in October 2017, after he was found guilty by an internal disciplinary hearing of “gross misconduct”.

The appointment of a new vice chancellor would be made before the current council’s term ends in August 2018, Parliament was assured.

During Thursday afternoon’s meeting, MPs expressed concern over the absence of a permanent leader at the institution, which had aggravated ongoing issues of accommodation, alleged corruption and incidents of violence and upheavals which have dominated reports to the parliamentary committee.

“A new vice chancellor needs to be appointed sooner rather than later,” said Connie September, chair of Parliament’s portfolio on higher education and training. September said it was a concern that there was instability at the top level.

Council members faced a committee who wanted to know how far the backlog extended for student accommodation. This was the subject of much scrutiny as accusations of corruption around the selling and subletting rooms were levelled against officials at the university’s residence departments.

CPUT established a commission of inquiry, headed by retired Judge James Yekiso, to investigate the breakdown in relations between university management and students and also problems around accommodation, among other issues.

Nojozi told MPs that consultations have taken place with the department of higher education and training, department of justice and correctional services and office of the chief justice to establish the commission of inquiry, in an attempt to stabilise the university culture and climate.

The commission is receiving submissions at the moment, and hearings will be closed with results made public afterwards. DM