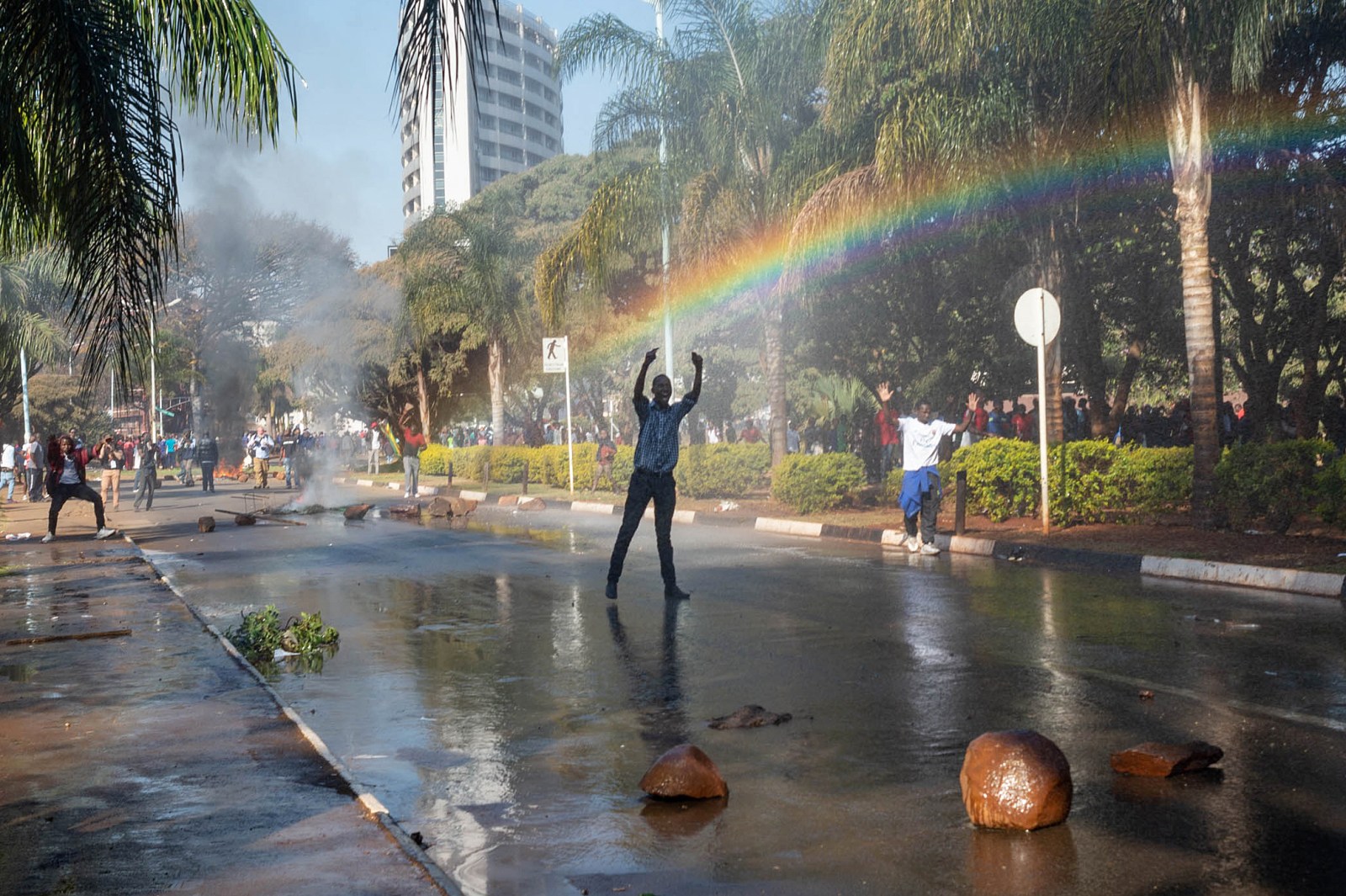 5 A protester gestures toward police water cannons outside of the gates of the ZImbabwe Electoral Commission (ZEC) during a protest against polling results in Harare, Zimbabwe on 1 August 2018. The day saw protests turn violent when police fired rubber bullets and teargas, before the army was called in and began firing live rounds. EPA-EFE/YESHIEL PANCHIA

The people are already making Zimbabwe ungovernable, says opposition politician Tendai Biti. Meanwhile, the army moved in – guns firing – in a bid to quell protests that erupted in Harare.

“The fascists are trying to steal this election, but we won’t accept it,” said veteran opposition leader Biti, who is one of the co-leaders of the seven-party Movement for Democratic Change Alliance (MDC-Alliance) coalition which contested the presidential and parliamentary poll.

“Our data shows we have won by 61%; Nelson Chamisa has won 61% of the votes. If you win by this much in the presidential elections – for instance in Masvingo (province) where Chamisa won overwhelmingly but hardly won any parliamentary seats – something is wrong. People don’t vote for a presidential candidate of one party and not for the MPs of that party. So it’s called cheating.”

A few days before the election, Biti had vowed to make Zimbabwe “ungovernable” if the MDC-Alliance lost. On Wednesday, after the ZEC announced the alliance’s overwhelming (official) defeat in the parliamentary poll, Daily Maverick asked him what his party’s next move would be and whether and how it was going to make the country ungovernable.

“You can’t ask me. The people are already making the country ungovernable. The people are already on the streets. They are marching spontaneously, without organisation. There are spontaneous riots. There is chaos in the town centre. Huge crowds are marching to ZEC, which pretends to be the electoral body. And the police are on the warpath. They are fighting the people.

“The fight is just beginning. It will get worse.”

Referring to gunshots heard in downtown Harare, Biti said they were the work of the “crazy illegal junta led by Chiwenga,” a reference to Constantino Chiwenga, who as chief of staff of the Zimbabwe Defence Force forced President Robert Mugabe out of power in November 2017 and was then appointed vice president.

Mnangagwa is believed to be desperate to win international approval of this week’s elections so he can tap the International Monetary Fund and other sources for the large infusion of capital he needs to salvage Zimbabwe’s crippled economy.

But Biti said that “the international community is not going to be fooled by this madness. We will make sure they don’t get a cent.”

“I can’t tell you how but I can tell you we have done it before,” said Biti, who was finance minister in the MDC-Zanu PF unity government of Zimbabwe between 2009 and 2013.

Biti based his assessment that the international community would not be fooled by the election partly on the conclusion of the European Union’s election mission’s preliminary report that “a truly level playing field was not achieved” in these elections.

The mission leader, Elmar Brok, cited several reasons for this assessment, including the clear bias of the state media in favour of Zanu-PF, that party’s abuse of state resources and instances of intimidation of voters. But, as with other election missions, the EU will only comment later on the vote-counting.

Biti insisted the elections had been simply rigged, utterly rejecting the opinion of some political analysts that the MDC-Alliance had made some costly mistakes.

Perhaps worse, these analysts contend, was that the MDC opposition failed to present a united front in the elections. It is true that seven parties did, in fact, join forces and unite behind one presidential candidate. Biti, who was secretary-general in the original MDC under the late Morgan Tsvangirai, later fell out with Tsvangirai and formed his own party. But he and another disaffected former Tsvangirai ally, Welshman Ncube, were able to overcome their differences to fight Zanu-PF.

But not all. After Tsvangirai’s untimely death earlier in 2018, a vicious fight erupted in his party over who would succeed him. Chamisa won but his main rival Thokozani Khupe broke away to form her own party and to contest both the parliamentary and presidential elections.

Biti insisted this had made no difference.

“Our colleagues got nothing, Look at the results. Thokozani got one vote in some constituencies… It was a binary, black and white contest between the MDC-Alliance and Zanu-PF.”

“This was binary. It didn’t matter who you are, they voted for the MDC.”

Biti even more contemptuously dismissed the assessment of some analysts that ousted President Robert Mugabe’s rather tentative and ambiguous endorsement of Chamisa on Sunday cost the MDT-Alliance credibility and votes.

“The fact is this was just plain rigging,” he reiterated time and time again.

Where was the proof of rigging?

“We do have evidence of rigging from the V11 forms and we will issue a statement about this shortly,” he said.

The V11 forms containing the results at each polling station were supposed to be posted outside each station by the ZEC. There have been widespread allegations about discrepancies in these forms, or about forms simply disappearing.

After announcing the parliamentary results on Wednesday, ZEC chairperson Priscilla Chigumba said that the ZEC would probably only be able to announce the presidential election results on Thursday because representatives of all 23 presidential candidates would have to go to ZEC headquarters in Harare to reconcile the V11 forms.

“They rigged blatantly… deliberately tampering and manipulating figures,” said Biti, quoting Stalin as having said: “It’s not the people who vote that count, it’s the people who count the votes.”

He added that he believed the confrontation between the people and the authorities would get uglier “and they will shoot some people”.

As he was speaking, shots were heard ringing out across downtown Harare and reports were emerging that the security forces had used tear gas and even live ammunition against protesters. A number of unconfirmed deaths were reported.

Derek Matyszak, a Zimbabwe expert at the Institute for Security Studies in Pretoria, differed with Biti, suggesting, as other analysts have, that Zanu-PF had already won before the first vote was cast.

“The votes in the ballot box probably match those announced,” he said.

“So the opposition is taking to the streets in one of many violations of the Code of Conduct and giving grist to the Zanu-PF mill.

“People are unable to accept that, despite all the depravity of Zanu-PF, they (the people) have lost not only the battle of these elections, but the war which began in 2000. Zanu-PF has basically gotten away with it. Those who think good always triumphs over evil have a hard time swallowing that.

“Zanu has gotten away with destroying everything they have touched or come near… agriculture, mining, infrastructure, the economy as a whole and people’s lives and livelihoods.

“They have done so without any severe repercussion and grown fat on corruption… in a liberal democracy they would have been voted out of power.” DM