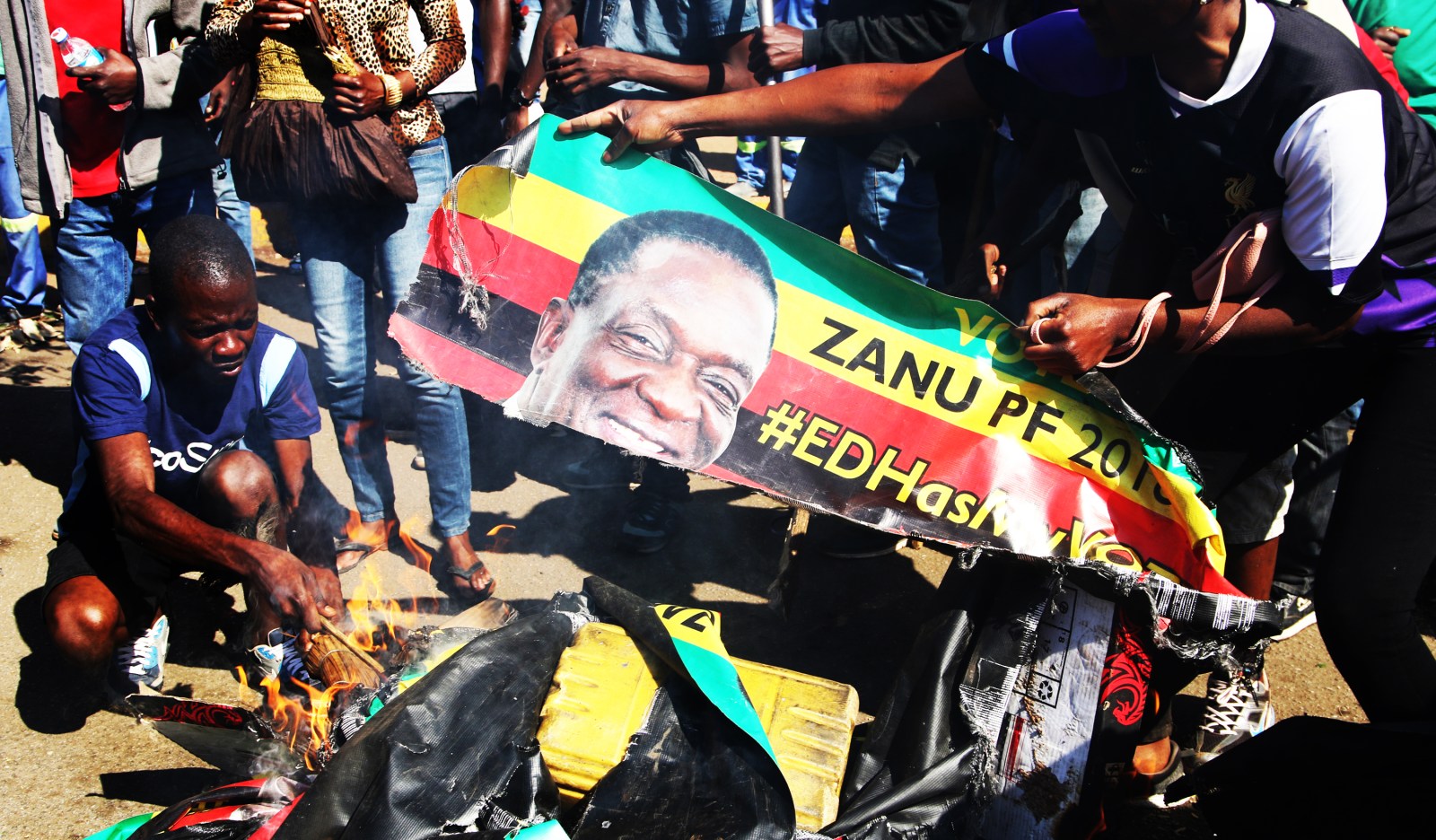 Protesters burn banners of Zimbabwean President Emmerson Mnangagwa in Harare, Zimbabwe, 01 August 2018. Protesters mostly from the Movement For Democratic Change (MDC) Alliance were unhappy with the loss of their party in the just ended elections EPA-EFE/AARON UFUMELI

Armed soldiers roamed the streets of Harare for the first time since President Emmerson Mnangagwa took over the reins just over eight months ago, as simmering post-election anger boiled over. By bedtime last night there were military checkpoints in the streets and at least three people were dead.

Fear arrived with the soldiers on a warm, sunny Wednesday afternoon in Harare. It was two days after Zimbabwe’s first historic elections after former president Robert Mugabe was deposed in a coup-not-a-coup, and Zimbabweans and the world had hoped for a happier ending.

The parliamentary results, announced a few moments before, showed Zanu-PF had a two-thirds majority with 144 seats. The opposition MDC got 61. Opposition supporters were suspicious, saying the release of constituency results before presidential results were meant to appease Zimbabweans, because results were “rigged” in favour of 75-year-old incumbent, Emmerson Mnangagwa, they claimed.

I found myself sheltering inside a parked minibus taxi with a stranger simply called Jerry – as if windows will stop bullets, but it was all we had. The small businesses in the area had all closed their security gates for the night and there was nothing else to hide behind. Up to that point it wasn’t clear whether the shots that have been ringing out in the streets of the CBD were rubber bullets, blanks, or bullets, so any shelter was good shelter.

The streets cleared in seconds as the soldiers approached. Until moments before, crowds of protesters and perhaps a few agents provocateurs had been shouting MDC slogans like “chisa mpama” (“hot clap”) at riot police with shields, tear gas and rubber bullet guns. Things were chaotic.

We ducked behind the seats as the men in camouflage, armed with sjamboks and AK47s, appeared from behind the corner and ran past us.

Like many others around, he blamed vice-president Constantino Chiwenga, the general in charge of the army during the November coup, for the deployment.

In a street where minibus taxis usually gather, there were burnt-out hawkers’ stalls that weren’t packed up quickly enough, a wrecked car, and the ashen remains of a large banner with Mnangagwa’s face proclaiming: “The voice of the people is the voice of God”.

Two cheap black women’s shoes lay abandoned in flight in the middle of the road.

Shots sporadically rang out in the streets and crowds of people were running this way and that, sheltering behind corners only to run away again, fearful that soldiers would come around and surprise-sjambok them.

“They shot someone on Nelson Mandela,” a woman shouted at journalists. There were puddles of fresh blood on the corner of Nelson Mandela Avenue and Park Street, and it looked like the man had been dragged to safety.

A photographer claimed he had recorded it, and that the man was “as good as dead” before he was taken to hospital.

Police later, on state television, confirmed three deaths, among them 42-year-old Ishmeil Kumeni, a street vendor caught in the crossfire. It’s not clear if it was this same man.

Just up the road, armoured vehicles – which an untrained eye would call tanks – drove in the direction of the Rainbow Towers Hotel on Samora Machel Avenue, the main drag running through town.

An hour or so before, there was a peaceful stand-off between riot police and protesters at the gate of the hotel, which also houses the elections results centre. Only that morning, a raft of observer missions declared the elections mostly smooth and peaceful, even if the playing fields weren’t level.

Some protesters earlier made their way there from the opposition headquarters called Morgan Tsvangirai House, where people gathered even the day before to “celebrate” their victory.

By the time the shots started ringing out, protesters had already ripped off some Zanu-PF posters from the lamp posts (Rainbow Towers shares an entrance road with Shake Shake Building, the nickname for the Zanu-PF headquarters) and made two burning barricades in the road with these and some dried grass. The Zimbabwe Electoral Commission banner that was on the fence had also disappeared.

Willing protesters were making statements to journalists through the fence, explaining that they were unhappy about the result.

By that time, roads to the city centre had been sealed off. The usually busy traffic light in Rotten Row was littered with the kind of rocks meant to stop traffic, and two large water cannon – these had been in the streets since the day before – were facing a restless crowd. As soon as these left, protesters smashed a city rubbish bin with large rocks, and threw about stones, littering the road even further.

After the blood we followed the “tanks”, but stumbled upon the Jameson Hotel and asked for some shelter to rest. A while later the armoured vehicles came back and passed the hotel, driving in the opposite direction, sounding sirens. A Zimbabwean in the lobby exclaimed: “It’s a state of emergency!”, explaining these were the same as the curfew sirens sound during such times.

Around evening rush hour, there was some traffic again on Samora Machel Avenue, with clumps of people coming from work, some in suits and some carrying briefcases, bursting into a run every now and then when soldiers passed on foot, terrorising them with their sjamboks. Some journalists in the aftermath also reported being manhandled, a camera was smashed and eNCA was ordered to switch off theirs.

Nobody quite knows how the protests escalated into the somewhat destructive aftermath, but by nightfall Zimbabwean police said they have invoked the Public Order and Security Act, which would enable police to call in the help of the army, and which restricts public gatherings.

Zimbabwean leadership was notably absent. Mnangagwa went on television but blamed the opposition supporters for getting shot by the soldiers after a peaceful election.

“Against this background, incidents of mounting violence and hooliganism which broke out this afternoon in the capital come as a complete surprise,” he said.

“We hold the opposition MDC Alliance and its whole leadership responsible for this disturbance of national peace, which was meant to disrupt the electoral process. Equally, we hold the party and its leadership responsible for any loss of life, injury, or damage to property which arise in these acts of political violence which they aided and abetted.”

The MDC Alliance called a press conference in front of the Rainbow Towers Hotel, where its spokesperson, Nkululeko Sibanda, read from a statement “that the president would like to communicate to the country, er, the presumptive president”.

“The deployment of soldiers and the regrettable loss of lives of citizens are reminiscent with, and reminds us of the dark days of the cruel killing of innocent civilians in Matabeleland in the 1980s and the brutal murder of hundreds of MDC civilians following the electoral theft,” he read.

He said it was a “false narrative” that protesters were violent.

Khusela Sangoni, spokesperson for South Africa’s president Cyril Ramaphosa, said the president had been in discussions “with the SADC Observer Mission as well as the Chair of the Organ. A joint statement will be issued with the Organ.”

Ramaphosa is currently SADC chair, and the organ is a smaller grouping of leaders who normally deal with hot spots. SADC heads of state are expected to meet in just over two weeks in Windhoek, Namibia.

“Nelson Chamisa of MDC must be held accountable for inflammatory and reckless statements which has now led to eruption of violent protests in Harare. What started as peaceful elections in Zimbabwe history. He irresponsible declared himself a ‘winner’. #ZimDecides2018”.” (sic)

This echoed police statements that they wanted to interrogate Chamisa and Tendai Biti, another opposition leader, about the statements they had made that inflamed the protests.

It wasn’t exactly the protesters who brought the guns, but if things go south in Zimbabwe again, at least they know where the governing party down south stands. DM