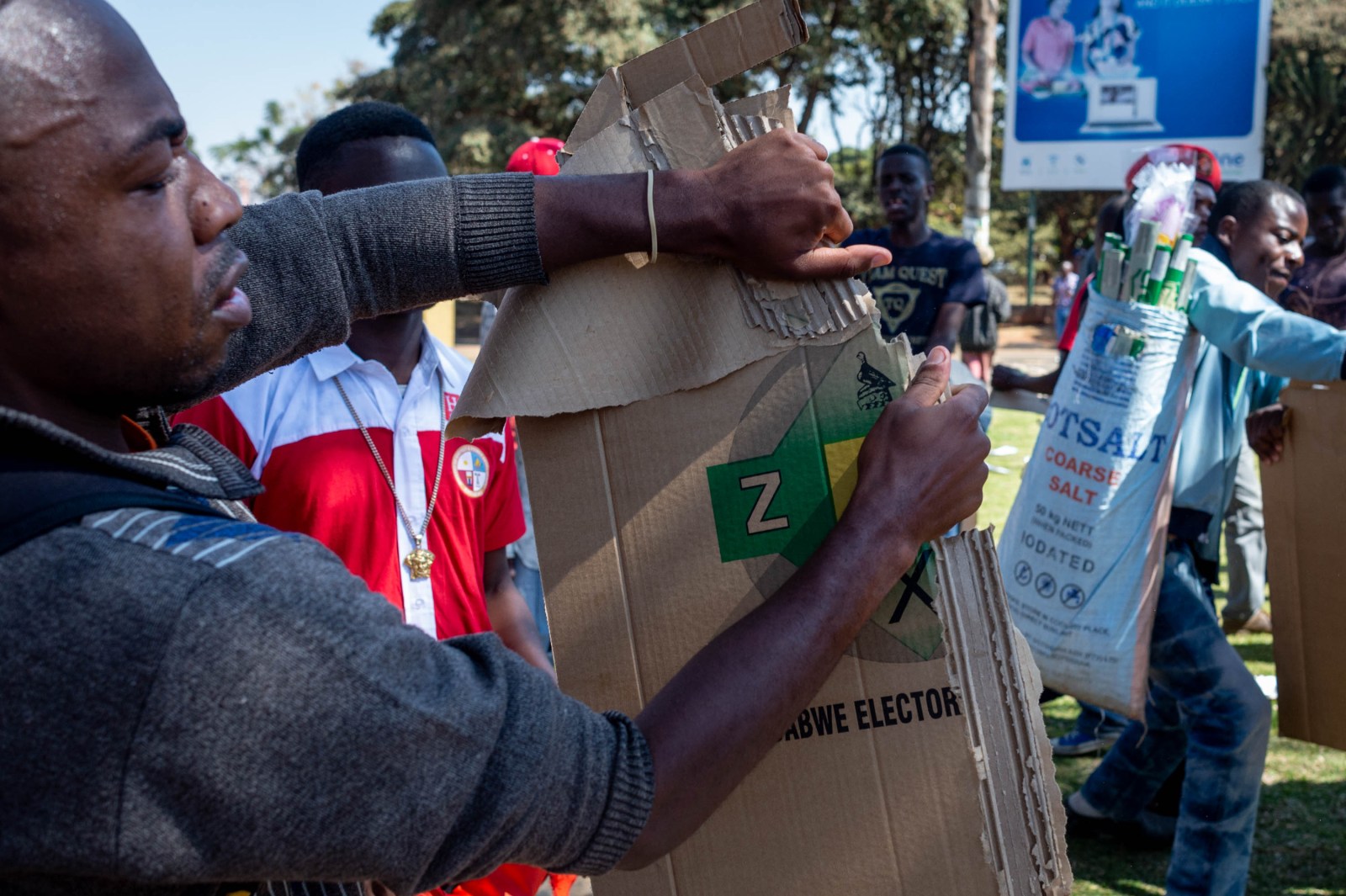 An MDC Alliance voter tears up a ZEC ballot box stolen from a vehicle during a protest against the vote count outside the Rainbow Towers in Harare, Zimbabwe, 01 August 2018. The fiercely contested election has seen Emmerson Mnangagwa's ZANU-PF win two thirds of the National Assembly, with preliminary presidential results to be announced today. EPA-EFE/YESHIEL PANCHIA

As the Zimbabwean Electoral Commission prepared to announce the final tally for the parliamentary elections, fired-up MDC Alliance protesters shouted angry slogans at the gates of the Rainbow Towers where the results were being announced.

It was a sign of the changing times. Five years ago the MDC also claimed vote-rigging, but supporters would not have dared to walk the kilometre or so from the party’s headquarters in Nelson Mandela Avenue, past the Zanu-PF headquarters to the gates of the Rainbow Towers Hotel where the national elections results centre is housed, to protest.

On Wednesday a 100 or so people clad in red T-shirts did exactly that. They were met by men in blue uniforms with transparent shields, and there were water cannons keeping watch. The police didn’t act, perhaps mindful of the bad PR even a shove would be under the watch of the world’s television cameras. President Emmerson Mnangagwa has been very mindful of his PR since overthrowing former president Robert Mugabe in November in the not-a-coup.

The protest turned into a giant, organic press conference of sorts, with people performing for the camera and approaching journalists – a lot of them from outside the continent – to give quotes. None of the protesters wanted to give their real names – perhaps they were afraid of comebacks – but all of them were happy to be recorded on cellphone and video cameras.

“They are announcing the parliamentary results first, so that when they announce the presidential results it will be automatic that Mnangagwa will win. We are disgruntled already,” a man who gave his name to journalists as Voice of the People, said.

Earlier in the day Zanu-PF had already achieved a parliamentary majority and looked set to head for a two-thirds majority, which would make it difficult to operate for an opposition president in the miraculous event that MDC Alliance candidate Nelson Chamisa actually garners more than 50% of the vote.

The protesters’ complaints are consistent with a propagandist Whatsapp that went viral in Zimbabwe on Tuesday, claiming to come from a Zimbabwe Electoral Commission official, outlining this “strategy” by what many perceive as a body partisan to Zanu-PF.

Protesters further complained that the media left them feeling disempowered. “Some media houses are publishing, covering propaganda. They only listen to Zanu-PF. They only listen to the concerns of the ruling party. They are given money to cover false things that are happening in Zimbabwe.”

This echoed concerns expressed by observer missions, from the Southern African Development Community to the African Union and missions from outside the continent, that the state-owned Zimbabwe Broadcasting Corporation and The Herald newspaper were biased in favour of the ruling party.

Elsewhere in the city centre some streets were on lockdown, commuters were forced off taxis, and hawkers hastily packed away their wares, anticipating the crowds and perhaps opportunistic looters.

Meanwhile, observer missions agreed that elections day was smooth and peaceful, but some had reservations about the run-up to the election, and also about the transparency of the results process.

The African Union observer mission, led by former Ethiopian prime minister Hailemariam Desalegn, concluded: “The 2018 elections is an important moment in Zimbabwe’s democratic transition and provides an opportunity for the country to change course, in particular, broadening the political space and allowing citizens to exercise their constitutional rights in a democratic way. By and large, the process was peaceful and well-administered.”

It recommended improvements in access to the voters’ roll, the media environment, and the Zimbabwe Electoral Commission’s impartiality.

The European Union observer mission, led by chief observer and Member of the European parliament Elmar Brok, said much the same in a different way. In its statement, it declared there was an “improved political climate, inclusive participation rights and a peaceful vote, but unlevel playing field, intimidation of voters and a lack of trust in the process”, which “undermined the pre-election environment”.

On Wednesday morning Zimbabweans woke up to the news that the ruling party already had the National Assembly in the bag.

By 9am Zanu-PF candidates had won 110 out of the country’s 210 constituencies, the MDC Alliance had 41 seats, the NPF had one seat, and only one independent candidate was voted in. Fifty-seven seats are yet to be declared.

The electronic results board at the stairs leading up to the national election results centre in Harare’s Rainbow Towers Hotel showed a map dotted with constituencies coloured green – the key for Zanu-PF wins – with less areas in red, the key for the MDC Alliance. About a third of the results appeared not to have been recorded on the board yet.

Unlike in South Africa, Zimbabwe’s elections results are not officially published online or on a frequently-updated scoreboard in the results centre.

Using its own collation of results collected from the V11 results forms posted outside each polling station, the MDC Alliance had already declared victory the day after the elections.

Opposition party election monitors have, however, complained that 21% of these forms had gone missing from the polling stations. Some fear that this could be an attempt to rig the results.

The Zimbabwe Electoral Commission roughly stuck to its promise the night before of having press conferences every two hours throughout the night during which each constituency’s results were read out at what appeared to have been a snail’s pace. Zimbabweans have put their lives on hold waiting for the elections, and they are keen to exhale.

None of the results in the presidential election – the winner is determined by a straight 50% plus one vote – have been unveiled yet.

The electoral commission has until Saturday to announce the results. Should there be no clear winner, a run-off election will be held in September.

Some MDC-sympathetic commentators have speculated that Chamisa could do much better in the presidential election, in which many opposition parties aligned behind one candidate, than in the parliamentary elections, because in many constituencies, independents split the opposition vote. DM