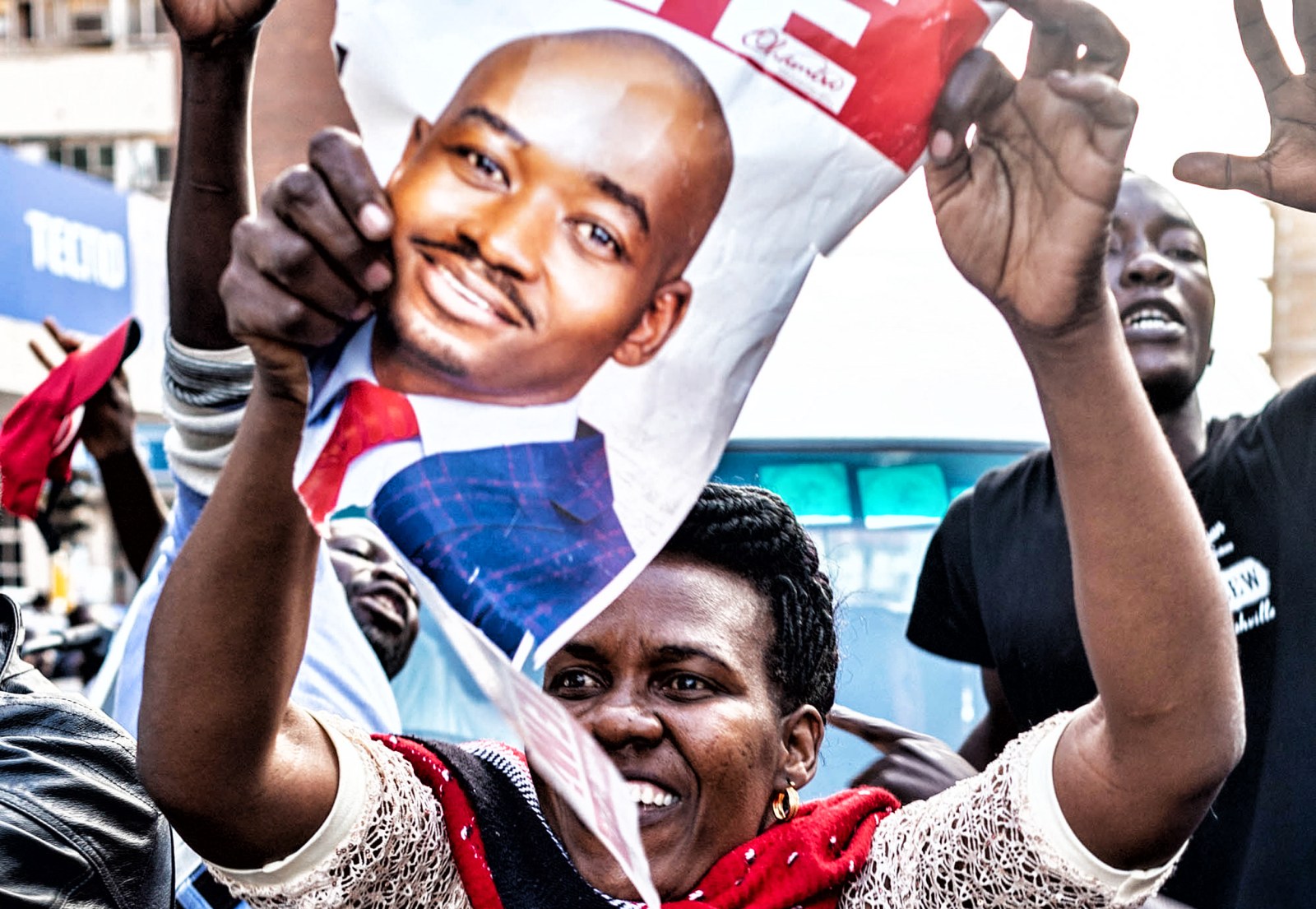 MDC Alliance supporters cheer outside the MDC headquarters in Harare, Zimbabwe, 31 July 2018. The ZEC is expected to announce a final result at the latest by Saturday, 04 August. EPA-EFE/YESHIEL PANCHIA

Zimbabwe’s ruling Zanu-PF invited the ANC to observe Zimbabwe’s recent elections, but will they remain best friends even if the outcome doesn’t favour the incumbents?

Small business development minister Lindiwe Zulu has, for the past few days, been living her other life in Zimbabwe as the head of the ANC’s international relations committee.

Despite talk within the party about it being somewhat cash-strapped, Zulu, ANC MP Lindiwe Maseko, and a younger observer from the ANC Youth League came to observe the elections at the invitation of Zanu-PF. Similar delegations were sent from Mozambique, Angola, Botswana, and other countries, Zulu said.

Zulu was passing through the lobby of Harare’s Rainbow Towers Hotel on Tuesday afternoon. The hotel is right next to the Zanu-PF headquarters and the hotel bar is a popular watering hole for the ruling party’s people. It also houses the Zimbabwe Electoral Commission’s elections results centre and the observer missions, which means almost all of the election watchers have been hanging here of late.

Zulu took time to explain why she was there.

“If we are invited by former liberation movements to the elections, we avail ourselves. Basically why we do that is because we are trying to see how we can be learning from each other in best practices, not only how we are doing things in terms of elections, but also on issues of governance.

“On the issues of elections, also, we want to share our different experiences and improve on our electoral processes as former liberation movements.”

With a history of rigged elections in Zimbabwe, as well as horrific intimidation by the army, what exactly is there the ANC wanted to learn?

Zulu said there’s a lot, although she seemed to suggest that South Africa should learn from Zimbabwe’s mistakes.

“First, that systems must be impeccable. Systems must be trusted by voters, irrespective of what political party they come from.”

She said: “If you look at the history from before, of how elections ended up and how they were conducted here, a lot needed to be improved, so we learn to improve in ourselves, so we don’t find ourselves in the same situation as here.”

Zulu has a bit of a history with Zimbabwe, and Zanu-PF. In 2013 former president Robert Mugabe called her names when she came here as part former president Jacob Zuma’s Southern African Development Community mediation team and supported calls for elections to be delayed. There were worries at the time about preparedness and levelling the political playing fields.

She told 702’s Bongani Bingwa this week, however, that she’s put this all behind her, although one cannot but wonder whether she felt just a little bit of schadenfreude about the fact that Mugabe was ousted the way he was during Zimbabwe’s coup d’etat in November.

These, then, strictly speaking, were the first elections she monitored.

Some rumours did the rounds among observers that the ANC had not sent an elections mission at all in 2018, and some within the ANC speculated this was because the party had a shortage of money. This talk turned out to be false, but would the ANC have come at all if it had money problems?

“Even if money was a problem, we are former liberation movements, we always have to find a way,” Zulu said.

“In the liberation struggle, when we were struggling, nobody told us about a shortage of money. I don’t know why now some people think the shortage of money will stop us from doing what we have to do.”

This week, the elections were close, and a poll by Afrobarometer suggested the two main parties were neck-and-neck. What would happen to this former liberation movement relationship should Zanu-PF no longer be in charge of government?

There were other former liberation movements on the continent that lost their elections, and that had a closer relationship with the ANC, she said. Zulu didn’t name them, but she could have been referring to former Zambian president Kenneth Kaunda’s United National Independence Party, which lost power in 1991. This happened before the ANC was voted in, but the parties were close even as the ANC stepped up to government three years later. The ANC’s party-to-party relations are mostly with its southern African allies.

“We don’t discard our allies. We won’t discard people that have seen blood spill, people who have been with us in the struggle,” she said.

The ANC in government also had relations with those who were not in the struggle, but the blood bonds between the former liberation movements were stronger, she said.

“We don’t discard the relationship just because people have lost elections.”

Were the MDC or anyone else to win here, there will be “a normal relationship” on government-to-government level, as President Cyril Ramaphosa said in his message to Zimbabwe on Monday, she said. When it comes to international relations, the ANC has often separated party and state well.

“It’s not about us, it’s about the will of the people,” Zulu quoted Ramaphosa as saying.

“We will support whoever wins if that’s the will of the people.”

If Zanu-PF lost, it wasn’t necessarily a sign that liberation movements on the continent were declining, she said.

“There will never be a time over for former liberation movements,” she said.

There are, however, lessons in it for the ANC – perhaps also ahead of the 2019 general elections following an increase in opposition support in the municipal elections of 2016.

“Former liberation movements need to adjust and understand the times at any given moment.”

She said: “If Zanu-PF loses, what were the mistakes? You can’t take away the history, you can’t change that, they did liberate this country, but obviously somewhere along the line, there were mistakes that were made.”

These related mostly to relevance.

“Liberation movements also have to ensure to continuously look at the environment and see whether they are as relevant in their way of doing things. The relevance of liberation movements will never die, but it is up to them to say what is the environment, where do we need to change, what do we do to draw in young people, what must we change, so that we remain as relevant as we were in the liberation struggle, and I think that’s very important for everybody.” DM