History is repeating itself in Zimbabwe 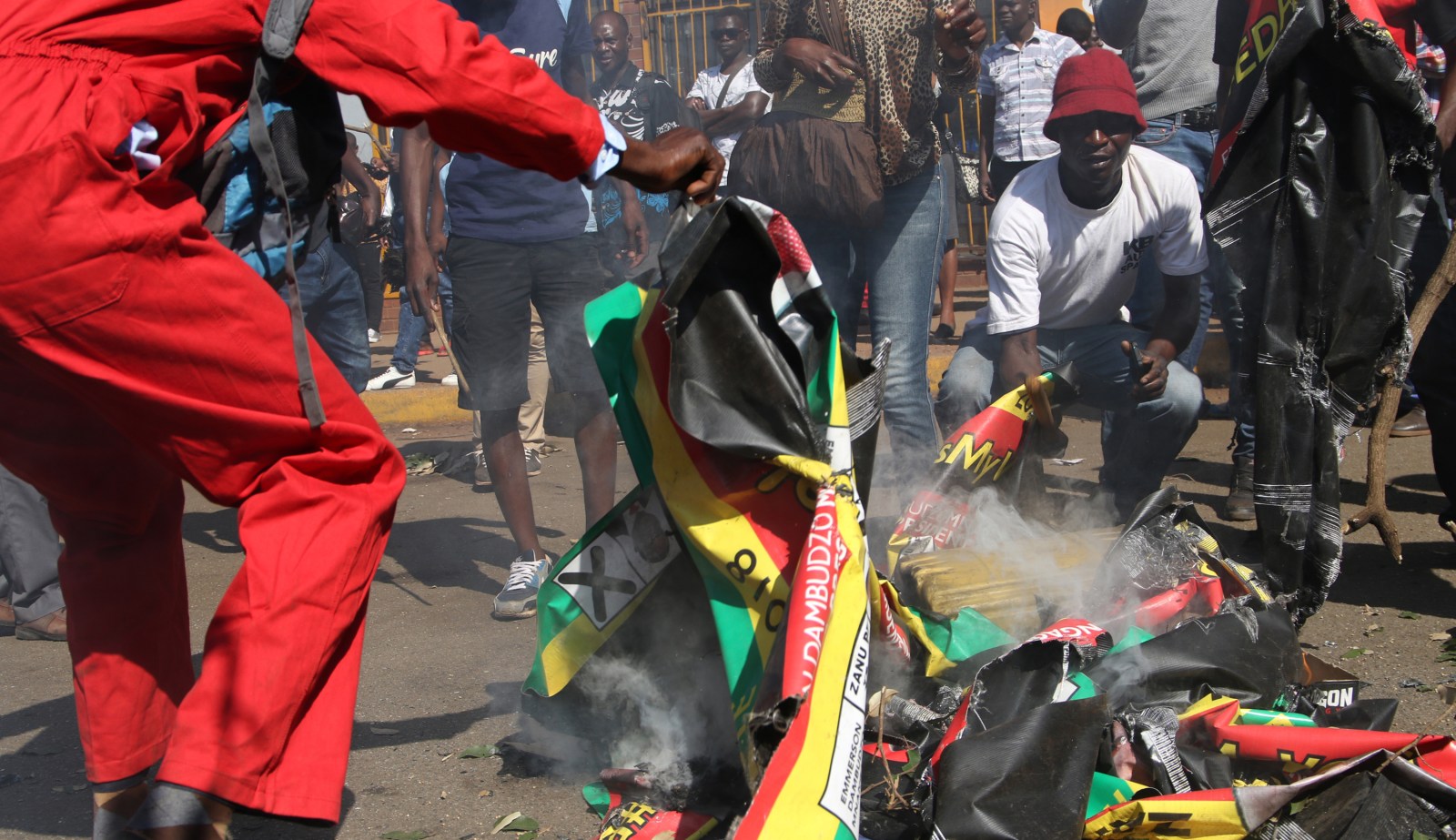 Echoes of past Zimbabwe elections were recalled on Wednesday as chaos broke out as it dawned on disappointed MDC Alliance supporters that their dream of bringing a new political dispensation to the country was dissipating.

The 2018 elections have been commended for their peacefulness even in areas previously regarded as hot spots for violence during elections. However, just after the various observer missions had announced their preliminary statements at the Rainbow Towers Hotel in Harare, members of the Movement for Democratic Change (MDC) Alliance were outside protesting over delays in election results.

Soon, people were running away for their lives, walking to their various destinations as there were no taxis on site to commute to their homes. The streets of Harare’s Central Business District were almost empty except for army soldiers carrying guns at each corner of the street.

In retrospect, the 2002 election results saw the spark of hope dying down. The disbelief and shock that struck mainly the urban population, whose desire for change was insatiable, could not be mistaken.

After years of Zanu-PF uncontested rule, the MDC coming in to the political fray brought a spark of hope to a population that had only known one party.

It was at a time when the MDC wave of change had got into people’s heads, particularly in urban areas. However, change did not come, not even now, as victory pointed to the ruling Zanu-PF, though the presidential elections were said to be too close to call.

However, hope was revived, with some reservations in 2017 when the military assisted in the ousting of the long serving and ageing then President Robert Mugabe. Are we likely to see a repeat of last year’s coup that wasn’t? Though the intervention was said to be peaceful, tankers and the army were everywhere.

Joseph Mandi, a taxi driver at the Fourth Street Rank, said a number of shots were heard. Next to the fruit and vegetable stalls at the rank is a smashed building, with the remains of splintered windows all over the place. Smoke from a fire that ignited at the scene could be seen.

“We had to run away from the rank when we heard the shootings and tear gas being thrown at us. It was not a good scene as a pedestrian who was walking innocently was shot and died on the spot,” Mandi said.

An old man who was waiting for his taxi to take him home showed his restlessness and discontentment over the results.

“Thirty-eight years as a gardener and despite having sent my kids to school, I’m still looking after them. Where can they work?” he asked.

“This life is terrible, we cannot continue like this, continuing with the same hopelessness, with no hope for the future. We just needed a break and change for a better life for our children,” the old man lamented.

Tinomuda Mundeya said: “Do you think the ruling party president can be declared a winner and take oath with all this happening? I bet you the credibility of the election is now in question,” he added. Mundeya said with the results announced so far, the ruling party of President Emmerson Mnangagwa has got the crown.

However, Silvanos Moyo said: “The elections are a reflection of the will of the people of Zimbabwe. The greatest lesson for those who lost is that there is no relation between online communication and offline activities. While people may enjoy on Twitter, Facebook, they should know that governments cannot be tweeted out of power, they need to organise proper structures throughout the country for them to be taken seriously.”

The European Union Election Observer Mission on Wednesday in its preliminary statement said:

“The misuse of state resources, instances of coercion and intimidation, partisan behaviour by traditional leaders and overt bias in state media all in favour of the ruling party meant that a truly level field was not achieved, which negatively impacted on the democratic character of the electoral environment.”

MDC Alliance spokesperson Douglas Mwonzora in Harare on Wednesday said the election was not free and fair.

Three people are believed to have died in the violence and the police have invoked the Public Order and Security Act (POSA).

Tendai Biti and Happymore Chidziva from the MDC Alliance have been called on by the police for interviews and to help police in their investigations.

“The Commissioner-General of police has invoked the provisions of section 37 (1) of the Public Order and Security Act chapter 11:17 and approach the minister of Home Affairs and Culture Heritage request for the assistance of the defence forces for the suppression of the commotion and disturbances in Harare central business district.” (sic)

“The more the presidential vote is delayed, the more it calls into question the population’s confidence in the election process.”

Both the EU and US missions have called for the release of the presidential results as soon as possible with the EU questioning why presidential votes were counted first but announced last.

ZEC has said it will release the results on Thursday at a time still to be announced. DM