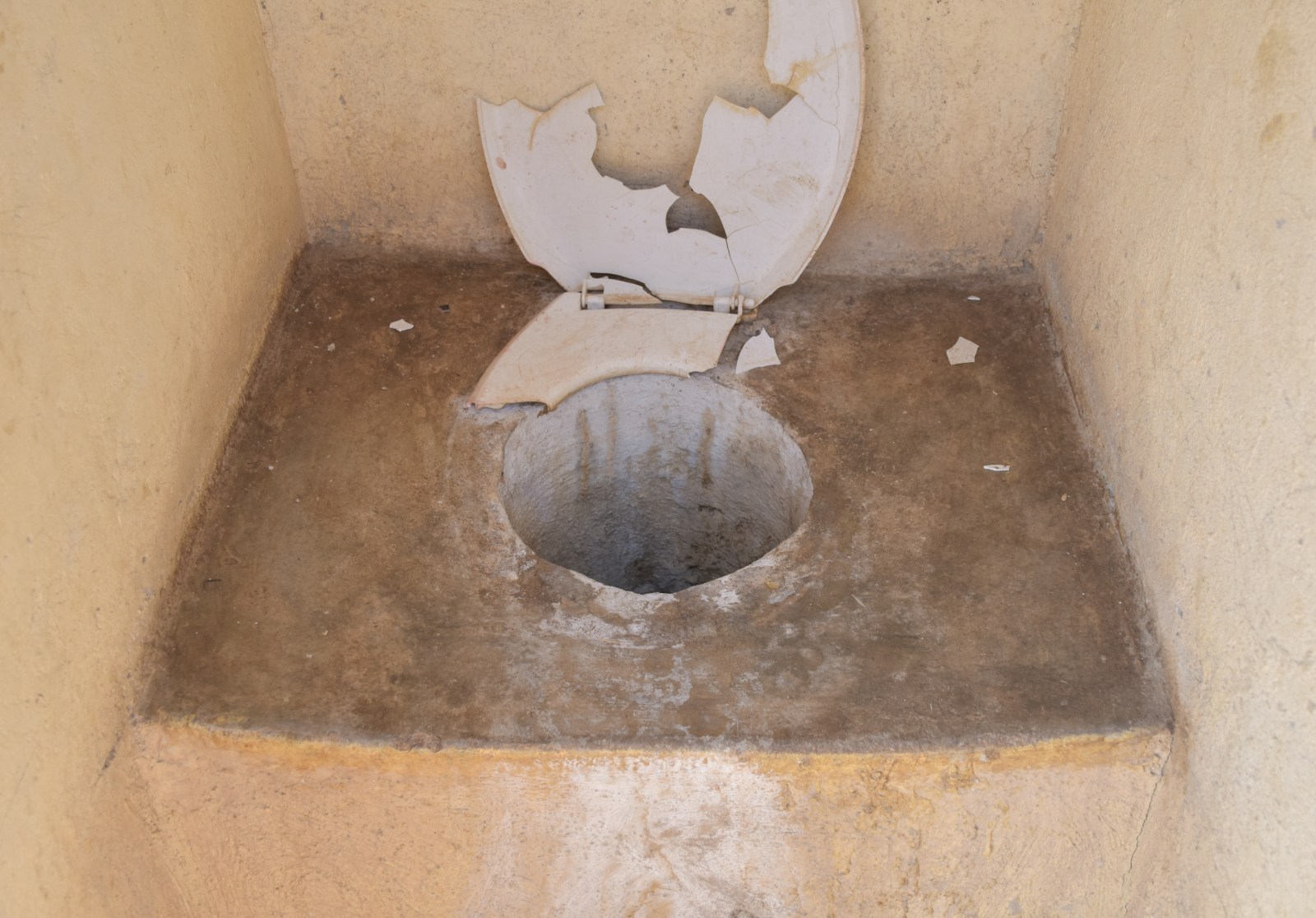 A dilapidated pit toilet at Utjane Primary School in Utjane Village, Limpopo. The toilet is still used by learners of all ages. Photo by: Adam Yates

Two months after the Department of Basic Education was to announce a strategy to fix sanitation in South African schools, private funding has enabled the department to formulate a two-year sanitation improvement plan. However, questions about the legitimacy of the data collected remain.

The Department of Basic Education, with the intervention of President Cyril Ramaphosa, is set to announce a plan that includes funding from the private sector to finally eradicate pit toilets at schools in South Africa.

A variety of funders from the private sector have pledged financial support to the government to help fix sanitation countrywide, according to department spokesperson Elijah Mhlanga. “Millions of rand” have already been offered, Mhlanga revealed during an exclusive interview with Daily Maverick.

The sanitation plan will have a two-year deadline, by the end of which the department believes they will fix pressing sanitation issues in South African schools.

The plan will be unveiled on 14 August, two months after the department’s initial deadline to urgently develop a new nationwide sanitation improvement strategy.

In March, Ramaphosa gave the department one month to “conduct an audit of all learning facilities with unsafe structures”, and then to present within three months a plan to rectify the problem. The three-month deadline passed on 16 June without a single public statement from either the President or the department.

Ramaphosa’s ultimatum came in the wake of the death of Lumka Mkhethwa, a five-year-old who died at her Eastern Cape school after falling into a pit toilet. Mkhethwa was the second child to die under these tragic circumstances. In 2014, five-year-old Michael Komape drowned in a toilet at his school in Limpopo.

According to Mhlanga, the private funders volunteered their support after Mkhethwa’s death.

The new urgency around the issue follows years of missed deadlines to eradicate pit toilets.

In March, Basic Education Minister Angie Motshekga said that South Africa needed R10-billion to deal with the issue of education sanitation. It is unclear exactly how much of this estimated expenditure will be covered by private sector funding, but Mhlanga seems confident in the new plan.

The private funders of the plan are “multinationals, as well as big international and local NGOs”. However, Mhlanga was not able to disclose the funders’ names as the president will reveal the benefactors and the specifics of the sanitation plan on 14 August.

The department has conducted the Ramaphosa-mandated audit – the information gathered from this is what will guide the sanitation plan and its implementation. Mhlanga said the department had “verified the audit by visiting the provinces”.

However, organisations such as Equal Education and SECTION27 are already raising questions about the legitimacy of the audit.

In a recent demand to see the audit results, Equal Education pointed out that the released data from the initial “rapid audit” in April 2018 directly contradicted data from the National Education Infrastructure Management System (NEIMS) Report in January. According to NEIMS there are 8,702 schools with pit toilets. The rapid audit found 5,779. “It is simply not possible for government to have eradicated plain pit latrines at over 2,000 schools in under four months,” said Equal Education.

The NEIMS report found 4,358 schools with “only pit latrines”, but the call to eradicate pit toilets has extended to schools that have other bathrooms in addition to the pit toilets. The Mbizana school, where Mkhethwa died, is an example of a school that had safer sanitation, but had not yet destroyed the existing pit toilets at the time of Mkhethwa’s death.

In an interview with Daily Maverick, a SECTION27 field researcher claimed to have visited 40 schools in the Limpopo province alone that had not been listed by the sanitation audit. Daily Maverick visited a Limpopo school in which the principal said she had to report the existence of pit toilets to the provincial Department of Education several times before being put on an official list of pit toilet schools.

“Unreliable school infrastructure data and inaccessible plans continue to mar attempts by school communities and civil society to hold government to account,” said Equal Education in its call on Motshekga to release details of the audit.

Prior to Mkhethwa’s death there was already growing pressure on the national government to eradicate pit toilets from South African schools. In 2013, the Department of Basic Education released its Norms and Standards for Education Infrastructure. The department stated in the Norms and Standards that “plain pit and bucket latrines are not allowed at school”. All guidelines were to have been implemented by November 2016. However, many schools still lack the basic necessities of school infrastructure and pit toilets remain widespread.

In addition to both the November 2016 deadline for Norms and Standards and the 16 June deadline set by Ramaphosa, the Limpopo High Court’s ruling around the Michael Komape case ordered the state to come up with a method of pit toilet eradication by 30 July. No plan pertaining to the ruling has been announced.

The continuous delay in action has frustrated many activists. Most recently, Equal Education Law Centre and SECTION27 won a case against the Department of Basic Education by calling for stricter adherence to the Norms and Standards and for clarification on certain wording that had previously alleviated responsibility from the department. The Bhisho High Court found the “lifetime indemnity” afforded to Minister Motshekga by the Norms and Standards to be “unconstitutional” and “invalid”.

One loophole within the original Norms and Standards stipulated that the guidelines set must be followed based on the co-operation of other relevant departments. This allowed DBE to indefinitely delay service delivery to schools based on the lack of capacity within other departments such as Public Works.

Mhlanga said all ministers involved in infrastructure delivery, not just Motshekga, will be present on 14 August “to commit their departments to making this initiative a priority”.

The 14 August announcement will happen at the presidential guest house. The results of the audit will be released as will the rollout plan to demolish all unsafe pit toilets on school properties.

“The President has made this his personal priority,” Mhlanga said.

When asked for comment on Monday, Motshekga’s spokesperson said that the plan will be discussed on the 14 August.

The spokesperson for Ramaphosa had not responded for comment at the time of publication. DM

Adam Yates is researching education infrastructure in South Africa through a fellowship with the Pulitzer Centre for Crisis Reporting. The information in this article was gathered via interviews for his project.