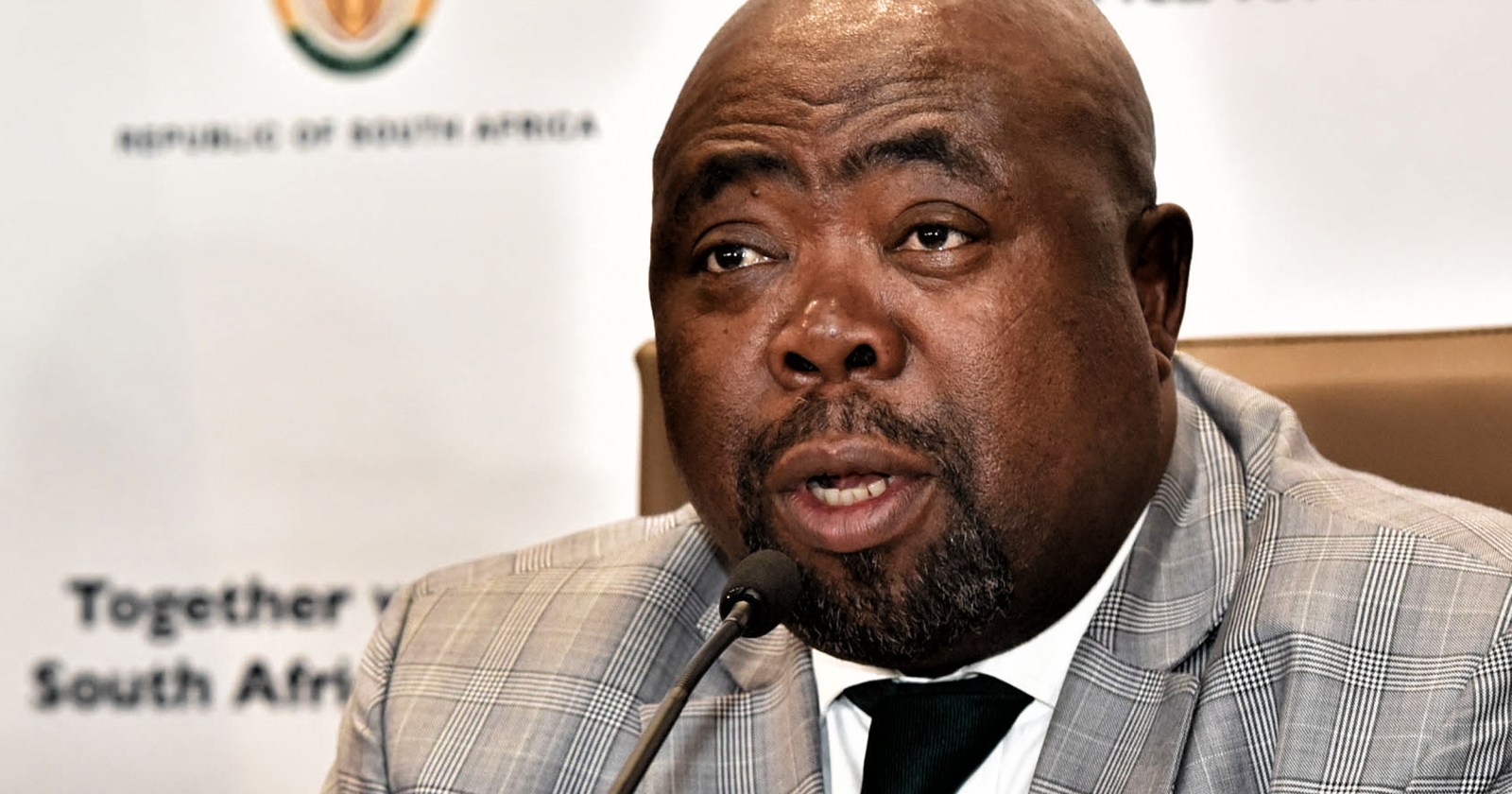 Minister of Communications, Ms Ayanda Dlodlo at Ronnie Mamoepa Media Centre, Tshedimosetso House in Pretoria joined Minister of International Relations and Cooperation Maite Nkoana-Mashabane and the Minister of Sports and Recreation, Mr Thulas Nxesi addressing media on the outcomes of the Cabinet meeting that took place on Tuesday, 01 August 2017. Cabinet held its ordinary meeting yesterday at Sefako Makgatho Presidential Guest House in Pretoria ahead of the Lekgotla. 03/08/2017, Ntswe Mokoena. (GCIS)

Public Works Minister Thulas Nxesi on Thursday said efforts to reclaim the state have run into counter-offensives by “State Capture forces” determined to keep open their access to state funds. This comes as Public Works is recovering R1.2-billion worth of graft, including R296,913,000 for non-existing parking bays. Also under scrutiny now are 684 questionable appointments made over just four months at the state’s property manager, which is responsible for 92,000 buildings. The battle at Public Works illustrates that rooting out corruption and patronage is a long game.

At a media briefing on fraud and corruption in the department in Pretoria, together with the Special Investigation Unit (SIU), Public Works Minister Thulas Nxesi on Thursday said “syndicates of officials are working with syndicates in the private sector” to continue to bleed the state’s resources even amid a changed political environment “committed to stamping out corruption, and turning the tide of state capture which brought this country to the brink of disaster”.

That wasn’t going to happen overnight, said, Nxesi “and not without a massive struggle against the state capture forces which are still entrenched and desperately striving to keep open access to state coffers”.

Those comments echo cautions by Public Enterprises Minister Pravin Gordhan, who on Thursday told a Federation of Unions of South Africa meeting of the push-back – with “some very creative things” – against those cracking down on corruption and cleaning up at State-owned Entities, according to his address televised by eNCA.

And so at least at those two ministries there is clarity there is no space to relax in this new dawn of the President Cyril Ramaphosa administration.

That’s why Nxesi asked Ramaphosa to extend the Special Investigating Unit (SIU) probes at Public Works to include its R1.5-billion emergency maintenance programme. It had emerged that the emergency maintenance budget frequently paid the same supplier for the same item often on the same day, or that one item was repaired repeatedly over just a few days.

Across Public Works’ 11 regions, the trend is for one or two suppliers to dominate up to 80% of business and, according to Public Works Acting Director-General Imtiaz Fazel, there is “collusion between our staff members and suppliers”. The new extended SIU proclamation came into effect last Friday.

Previously, SIU scrutiny of 16,000 suspicious transactions over three years to May 2016 uncovered mis-stated invoices totalling around R2-billion of graft. These probes have led to a series of civil proceedings to recoup R1.2-billion from landlords, contractors and suppliers, that Fazel said would reflect on the departmental financial statements.

SIU boss Advocate Andy Mothibi on Thursday said there were nine cases under way to recoup R807-million, while landlords had signed acknowledgement of debt for various cases of overcharging the department to the tune of R591,000. In addition, the SIU has referred 81 cases of overcharging for space, municipal rates, Value Added Tax (VAT) or parking bays, valued at R265-million, to the department for further action as the private sector companies involved were contesting findings.

This emerged from just over 1,000 leases the SIU scrutinised, but Mothibi announced that further financial recoveries amounting to R5-million arise from action over irregularities for prestige projects. These include ministerial homes in Pretoria and Cape Town, various other high-profile buildings, including the ministerial offices at Parliament, 120 Plein Street, where summonses have been served for overcharging on maintenance work.

The SIU also identified 2,469 Public Works officials at various levels of seniority with conflicts of interest, effectively running private businesses, and some doing business with the department or elsewhere within the state, even though though that has been banned by public service regulations since January 2017.

And it is this aspect of the SIU probe that shows how entrenched State Capture is among officialdom. Ahead of her budget speech earlier this year, Public Service and Administration Minister Ayanda Dlodlo said there were civil servants who refused promotion to senior management, where financial interest must be disclosed, in order to continue making money off government. Serious questions over the rigour of civil servants’ disclosures were raised by the Public Service Commission, whose analysis recently showed half the senior civil servant managers who must disclose their financial interests instead hid their directorships and failed to obtain permission for paid work outside their day jobs.

At Public Works, Nxesi put in place anti-corruption and turn-around strategies in 2012, shortly after he was appointed to head Public Works. It’s been a rough ride, in no small way due to the years of public outcry over the R215-million spend on Nkandla, then president Jacob Zuma’s rural homestead, that escalated from an initially planned R65-million.

After a detour of 11 months at sports following that controversial March 2017 reshuffle that saw Gordhan and his deputy Mcebisi Jonas moved from the finance ministry, Nxesi’s back at Public Works following a Cabinet reshuffle in late February. On his return he found some curious developments, including learning how veteran civil servant Mziwonke Dlabantu, whom he had recruited in his first stint at the portfolio, had been “elbowed out”, as one insider put it, while Nkosinathi Nhleko was in charge.

And then there were those 684 appointments into largely non-essential posts in the Property Management Trading Entity that’s in charge of the state’s property portfolio of 92,000 buildings. Pushed through in just four months from late 2017 to early 2018, just as the political landscape was changing, those appointments effectively chowed the money to leave little for the much needed technical and professional positions.

That appointments probe, jointly with Public Service and Administration, and the extension of SIU investigations to cover the emergency maintenance monies, got Nxesi some personal push-back, but not unexpectedly given the general resistance to cleaning up. “As night follows day an anonymous document appears with unsupported allegations I’m siphoning off millions of rands from the department”.

That’s much along the lines of the Bell Pottinger-type smear campaigns and fake news push, Gordhan warned of earlier in July at the National Press Club. And it’s something others, not only among Cabinet, but also State-owned Entities boards and management, have come to expect in efforts to clean up State Capture.

On Thursday Nxesi said his response to such predictable smears was to request a lifestyle audit – for himself first, then his managers and others in the department.

Lifestyle audits have also been announced by police national commissioner Lieutenant-General Khehla Sitole for the SAPS, wracked by several procurement scandals. At Public Enterprises, such lifestyle audits will be part of the SIU probe into corruption at Transnet and Eskom, two of the SOEs at the heart of State Capture as it emerged not only in #GuptaLeaks, but also the parliamentary State Capture inquiry.

According to Gordhan’s parliamentary reply to DA MP David Ross, the outcomes of these life style audits would be used, among other, to “hold accountable those who unduly benefitted from the state’s resources and procurement opportunities” and to recover monies.

It remains unclear how far Nxesi is ready to go with such lifestyle audits. But it seems that alongside President Cyril Ramaphosa, who has on various platforms committed his administration to rooting out corruption and State Capture, Gordhan and Nxesi are among the few from Cabinet speaking out.

In May Gordhan during his budget speech pledged to “recapture” SOEs for good governance and accountability.

On Thursday Nxesi described the fight against fraud and corruption “not as a single event, but a process that requires meticulous investigation”. This struggle should be the main priority for South Africa, alongside transformation that was not just benefitting a few.

“The only way to respond to the fight back by the State Capture forces is to intensify the struggle against corruption and State Capture,” Nxesi said. DM