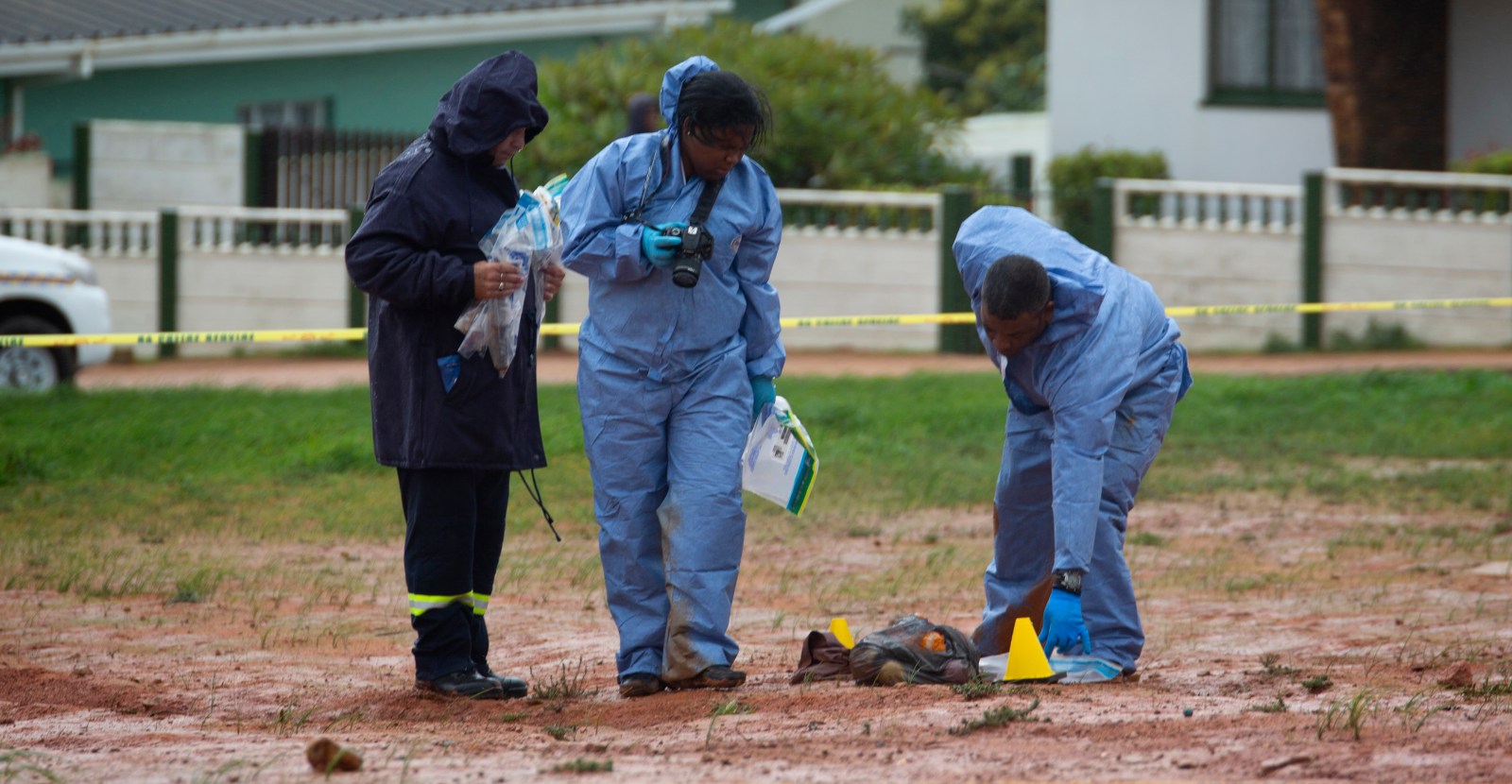 Two people were killed and several injured in a moque attack in the early hours of Thursday 14 June 2018 in Malmesbury, Western Cape. The suspect was armed and after having fled to a nearby field, was fatally shot by police. Photo by Leila Dougan

Exactly three weeks after a knife attack on a Malmesbury mosque left two dead, the Hawks have released more details about the man responsible for the murders. Confirmation that the attacker was an outpatient at a Cape Town psychiatric hospital has been met with relief in some quarters – but that fact is not necessarily relevant to whether some form of lone-wolf extremism was involved.

The Somali man who stabbed two people to death in a Malmesbury mosque has been confirmed as someone who spent time in a mental hospital. In response to this announcement, there has been an almost audible exhalation of breath from the leaders of Somali and Muslim communities.

While the news will do little to heal the grief of the families of the murdered men, the sense of wider social relief was understandable. A lone psycho is, after all, an easier pill to swallow than the idea that the attack represented a sudden flare-up of extremist violence in South Africa, or the awful manifestation of sectarian tensions within the local Islamic body.

A lone psycho behind an act of violence means that a deranged individual embarked on an essentially meaningless killing spree. It means that we need dwell no more on this episode. It remains terrible and heartbreaking, but the case is closed.

Yet is that framing of the situation really valid?

To recap: on 14 June 2018, the quiet Western Cape town of Malmesbury was left reeling after playing host to a strange and brutal form of violence. In the early hours of the morning, while Muslim men were praying at the Malmesbury Sunni Mosque, a man who had entered the mosque earlier suddenly launched a knife attack on his fellow worshippers.

Two were killed: Ismail Bassa, a local who lived next to the mosque, and Somali national Sayaad Hitig. The death toll would rise to three after the perpetrator was shot dead by police after allegedly attempting to attack them.

The matter was swiftly turned over to the Hawks – since it followed an ostensibly similar attack on a Shia mosque in Verulam, KwaZulu-Natal, a month earlier. Both cases saw the targeting of mosques in sleepy rural areas; both cases saw knives used to slit throats. The Verulam attack occurred just before the onset of the holy month of Ramadaan; the Malmesbury attack happened a day before the celebration of the fast’s end. It was inevitable that comparisons would be drawn.

But three weeks later, the Hawks have come forward to say that such comparisons are ultimately unwarranted.

“There is no evidence [in the Malmesbury case] to show a link with the Verulam attacks,” Hawks spokesman Brigadier Hangwani Mulaudzi told Daily Maverick. “This was an isolated incident.”

In a public statement, the Hawks confirmed the attacker’s identity as 23- year-old Nur Arawal, an outpatient at Bellville’s Karl Bremer Hospital from 2013 until recently.

Long before the Hawks’ statement, the attacker’s identity was already known to the Somali community in Bellville, Cape Town, where he worked as a vendor selling Grandpa headache tablets and shoes.

Comment on the matter was unavailable from the Karl Bremer facility, which is a government hospital with a psychiatric ward. Mulaudzi specified to Daily Maverick, however, that Arawal had been diagnosed with schizophrenia.

Numerous versions of Arawal’s name have been circulating since the attack: Noor Abdullah, Noor Abdulle Araale, Noor Turaayo. In Somali media reports, he has been named as Nuur Caraale.

Daily Maverick has identified what appears to be his Facebook profile, where Arawal is presented as an unremarkable man in his early 20s. Originally from Mogadishu, but relocated to Cape Town, Arawal last posted a profile picture in April 2018 emblazoned in pink hearts with the words “My heart is just for you”.

Judging from the Facebook profile, Arawal appears to have maintained a keen interest in Somali politics and was a devout Muslim. At face value, there is nothing to predict the gruesome violence he would commit in mid-June.

But the news that Arawal had received psychiatric treatment has been greeted in some quarters as if it were a welcome solution to the puzzle of his actions.

In a statement on 5 July, the Muslim Judicial Council (MJC) said it was “relieved that the Hawks have identified the perpetrator involved in the Malmesbury Mosque attack”.

“The Hawks identified the perpetrator as 23-year-old Nur Arawal who was an outpatient at Karl Bremer Hospital. They have, therefore, ruled out terrorism or ‘radical activity’ as the motive in the attack”.

In conclusion, wrote the MJC, “we hope the outcome of the Hawks’ investigation brings this matter to a close”.

The Somali Association’s Mohamed voiced a similar sense of relief to Daily Maverick.

“The Hawks have done their work; they found out that it has nothing to do with any act of terrorism or anything like that.”

The Malmesbury community, Mohamed said, now “understood” that the incident was the work of a mentally ill individual.

“There is no backlash; no tension,” he said.

In other words, the Hawks’ announcement that Arawal was a psychiatric patient has been greeted as sufficient motivation for the crime. The implication is that one can be either mentally ill or a radicalised individual, but not both at once.

Quizzed about this by Daily Maverick, Mulaudzi clarified that the Hawks had not ruled out a terrorist motive for the attack because the perpetrator was mentally ill.

They had ruled out a terrorist motive for the attack because the investigation into Arawal had turned up no evidence of radicalisation or links to extremist groups.

“We have done our background checks, we know how to look for extremist links. There is nothing there,” Mulaudzi said.

This is an important distinction, because the idea that a “lone wolf” attacker with mental health problems cannot also be an extremist is demonstrably false.

Writing in the Guardian in June 2017, British psychiatrist Dr Kamran Ahmed noted that there is strong evidence to suggest that “those with radical Islamist leanings have a high chance of having mental health vulnerabilities”.

Indeed, the latter often precedes the former. Psychologically vulnerable people may be fertile prey for extremist recruiters, and a 2014 study found that “those with mental illness may be susceptible to ideological influences in their immediate social environment”.

“People with mental illness often derive their symptoms from the environment around them, so the social context we are operating in further exacerbates the problem. The round-the-clock coverage of terrorism, the constant hate speech, the all-too-easily accessible online propaganda: I am increasingly seeing both Islamist and far-right extremist ideas and behaviours featuring in the symptoms of patients with mental illness.”

The 2014 study terms it a “false dichotomy” to believe that “an act of targeted violence is either the action of a rational terrorist or an irrational mentally unstable civilian”.

In the case of the Malmesbury mosque attack, there is indeed a kind of reassurance in the Hawks’ conclusions that it was not part of a wider campaign of violence or evidence of underlying religious tensions.

But to point to Arawal’s psychiatric history as the evidence for this makes no sense at all.

One simply has to trust that the Hawks have done everything possible to examine not just Arawal’s personal background but the people he interacted with, the media he consumed, the religious teachers he followed and his general social context.

As a family member of one of the murdered men put it on Facebook, in response to the Hawks’ announcement:

“Let’s hope and pray that they are right, because if they are wrong we will soon get a very nasty wake-up call”. DM