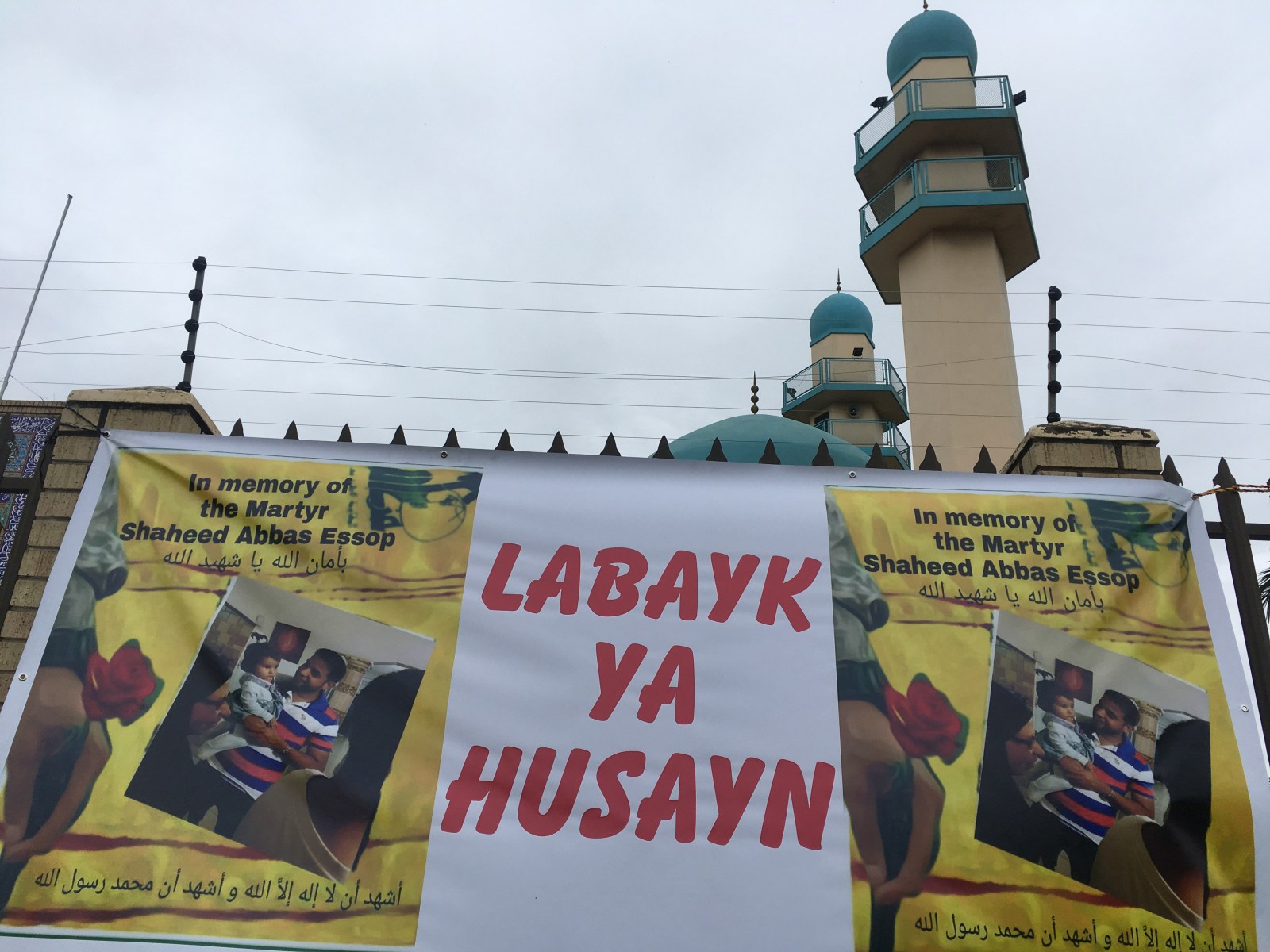 Outside the Imam Hussein mosque in Ottawa, a banner now proclaims slain mechanic Abbas Essop a martyr to the Shi'a cause. Photo: Rebecca Davis

A month has passed since the shock attack on a Shi’a mosque near Verulam which killed one man and left two more badly wounded. Nobody has been arrested, and the Hawks will say only that the investigation is continuing. Meanwhile, tensions are flaring within the Muslim community – as leaders pushing for Sunni-Shi’a harmony say they are experiencing intense backlash from certain quarters.

“No arrests have yet been made,” confirmed Hawks spokesperson Simphiwe Mhlongo to Daily Maverick. “The investigation is ongoing.”

That is all that Mhlongo is willing to say about the priority crime unit’s attempt to get to the bottom of the events at the Imam Hussain mosque in Ottawa on 10 May.

On that day, the mosque was attacked by at least two or three men who used a knife to slit throats, burned a library and a relic room, and attempted to spark a gas explosion in the kitchen. Mechanic Abbas Essop was killed. The mosque’s moulana – religious leader – Ali Nchinyane and the mosque’s caretaker Mohamed Ali were badly injured, but survived.

Those responsible for the attack, claimed eyewitnesses, climbed into a car outside the mosque and drove away. Three days later, an unsophisticated explosive device was found inside the same mosque, underneath the moulana’s chair.

This kind of violence is so rare in South Africa that it made international news. But a month later, there is no public indication from the Hawks as to whether any progress whatsoever has been made in investigating what lay behind it.

When Daily Maverick visited Ottawa in the aftermath of the attack to produce an in-depth report, we found that speculation and conspiracy theories were circulating wildly – not just in the immediate environment of the mosque, but more broadly.

While many felt that the attack was a reflection of anti-Shi’a prejudice, others looked for signs of a third force intent on stoking conflict within South Africa’s Muslim population.

In the absence of any answers a month later, says Imam Rashied Omar, of Cape Town’s Claremont Main Road Mosque, “there’s a lot of tension in the community”.

Omar was speaking to Daily Maverick on Monday, a few hours before a press conference was scheduled to be given in Cape Town by the Muslim leaders behind the “Cape Accord”.

The Cape Accord is a pledge originally drafted in December 2017, calling for tolerance and solidarity between Muslims in light of growing anti-Shi’a sentiment in South Africa – some five months before the attack on the Shi’a mosque.

The wording of the Cape Accord states that the current climate “promotes intra-faith hostility and unwarranted attacks on foremost figures, by individuals and groups within our broader faith community”, and pledges to redouble efforts towards tolerance and solidarity.

But Monday’s press conference had to be postponed – amid tensions and threats directed at the signatories of the Cape Accord.

“There is a backlash against it from more conservative, reactionary groups,” Imam Omar told Daily Maverick.

“[These groups] have declared all signatories as being outside of the fold of Islam. They say we are Shi’a sympathisers.”

Few Muslim leaders are willing to talk on record, but there is evidence of an intensifying climate of hostility towards local Sunni leaders who have taken a strong stance in condemnation of the Shi’a mosque attack.

One of the most vocal sources of criticism has been The Majlis, a Port Elizabeth-based Islamic newspaper founded in the 1970s by Moulana Ahmad Sadeq Desai and circulated internationally.

In a recent website post, The Majlis declared Cape Town’s Gatesville Mosque haram (forbidden) due to the fact that it recently hosted an event at which the importance of the Cape Accord was reiterated.

When Daily Maverick contacted The Majlis for comment, we received a response from one “A.M. Desai”, who informed us that Moulana Ahamd Sadeq Desai was currently away. But A.M. Desai was nonetheless willing to elaborate on the newspaper’s feelings about the Cape Accord.

“The Cape Accord is simply a scrap, phantom body. It is a toothless dog – a mongrel dog, barking for just any nonsense,” Desai wrote in an email.

“In terms of Islam, this Shiah-inspired ‘accord’ is devoid of Islamic substance. It is without the support and approval of the Ulama [Islamic scholars] and the Muslim community.”

The Majlis believes that the idea that the Verulam mosque attack was the result of Shi’a-Sunni tensions is an invention by “sinister western forces” bent on creating “anarchy” within the Muslim community.

On at least one point, The Majlis is correct: the Cape Accord has yet to win the approval of influential Muslim authorities – despite the accord being phrased in a manner which many would consider uncontroversial.

Despite condemning the Verulam mosque attack, for instance, the Muslim Judicial Council (MJC) has yet to sign the accord.

“Regarding the Cape Accord, we are currently deliberating on the matter and will issue a statement as soon as we are ready,” MJC spokesperson Mishka Daries told Daily Maverick.

“The MJC, like the rest of the South African community, equally awaits the Hawks report [on the Verulam mosque attack] and remains deeply concerned that the culprits are not apprehended.”

Repeated attempts by Daily Maverick to obtain comment from Police Minister Bheki Cele on the status of the mosque attack investigation were unsuccessful.

But the ANC’s Francois Beukman, chair of Parliament’s portfolio committee on police, told Daily Maverick that the committee views the attack as warranting a priority investigation.

“The portfolio committee is very concerned that no breakthrough has been made in the case so far,” Beukman said, adding that a report from the Hawks had been requested.

Beukman committed to raising the matter with SAPS management in Parliament on Thursday.

Imam Omar says one of his fears is that, if the perpetrators of the mosque attack are not apprehended, it may embolden either the same attackers or copycats to commit further atrocities.

“People are not willing to publicly come out and say it, but there are concerns about safety,” he said.

At a recent event during Ramadaan, “we had to take the extraordinary step of employing private security”, Omar says.