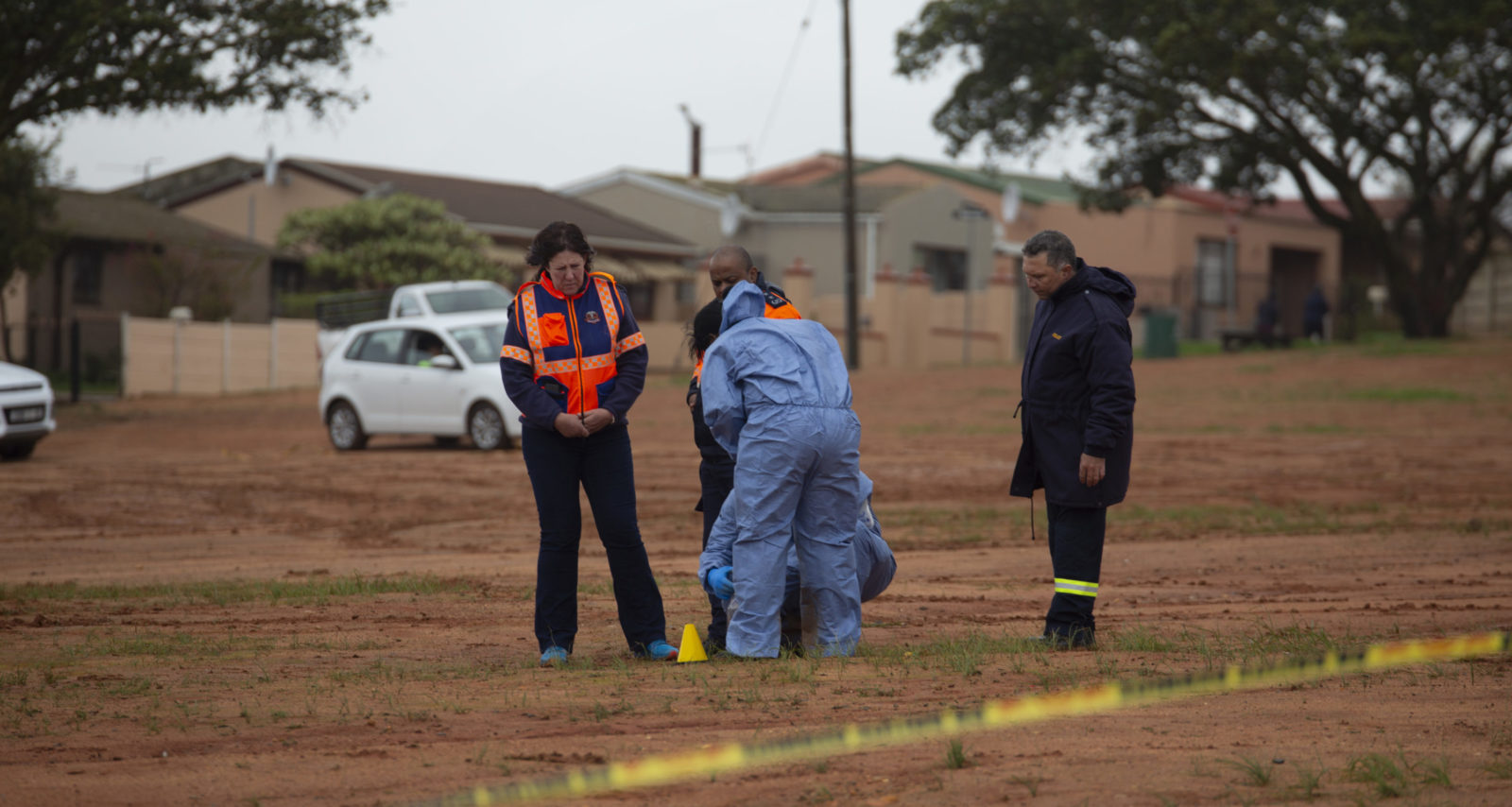 Two people were killed in a moque attack in the early hours of Thursday 14 June 2018 in Malmesbury, situated in the Western Cape. The suspect was armed and after having fled to a nearby field, was fatally shot by police. Photo by Leila Dougan

The holy month of Ramadaan has been bookended by two deadly attacks in South African mosques. In both incidents, mosques in quiet rural areas were targeted, and attackers used knives to slit victims' throats. Police say it’s too early to connect the attacks in Verulam and Malmesbury – but while Muslim authorities call for calm, fears are rising as to the meaning of this violence.

On an icy morning in the quiet Western Cape country town of Malmesbury, a body lay exposed to the elements on a field.

Around it, police were busy analysing what had become a crime scene in the hours just before dawn on June 15, 2018. It was to this patch of grass that a man had been chased after allegedly turning on the late-night inhabitants of a nearby mosque with a knife, killing two and injuring at least two more. And it was here that police would gun him down, amid circumstances that are still unclear.

A few hundred metres down a quiet suburban road, the Malmesbury Sunni Mosque had been cordoned off with police tape. A police dog was sniffing the perimeter with his handler.

Neighbours across the road gathered on stoeps to chat quietly, still shaken by the events of a few hours earlier.

“I can’t believe something like this could happen in Malmesbury,” said an elderly man who would identify himself only as Brian.

Brian lives directly opposite the mosque. In the early hours of the morning, he says he heard raised voices. At first he thought they belonged to children, before realising they were the voices of “big people”. Still, it never occurred to him that anything very serious was happening.

From the house next door to the mosque, a steady stream of people came and went throughout the morning. This was the home of 74-year-old Ismail Bassa, a retired sales rep who was a faithful worshipper at the mosque.

Bassa was spending Wednesday night in the mosque, engaging in an intense form of devotion called tikaaf, which sees men seclude themselves in mosques to pray in the final days of Ramadaan.

His relative Marwan Solomon told Daily Maverick the story of what they believe happened to Bassa – an account they have pieced together from the testimony of Bassa’s two sons, and which has yet to be fully confirmed by police.

“In the late hours of last night, the murderer walked into the mosque and requested shelter. The imam accepted him in because this is the time of tikaaf,” Solomon said.

Somewhere between 3 and 4am, the late arrival to the mosque suddenly launched an attack – “slashing and stabbing”, says Solomon.

“A lot of the worshippers were able to manoeuvre and get themselves out of the mosque. However Ismail Bassa, being old, wasn’t able to move as fast as everyone else. He got his throat slit.”

Another worshipper, reportedly of Somali origin, was also murdered. Bassa’s son Faizel attempted to wrest the knife from the attacker and was stabbed several times, though he survived.

“The funny thing is that the murderer was still in the mosque [afterwards],” claims Solomon. “So he didn’t just murder everybody and then leave. He was still hanging around looking for other people.”

Leaving the mosque, the attacker allegedly headed up the road.

Malmesbury police constable Henry Durant had earlier described the attacker’s demeanour to journalists as “very calm — he did not run, he walked away”.

Solomon says that Bassa’s other son Saud proceeded to give chase after the attacker in his car and “knocked him a few times”, but the attacker was still able to escape. He had been chased to the nearby field when police arrived on the scene.

What happened next is unclear. Police spokesperson Andre Traut described it thus: “Police tried to persuade him to hand himself over. He ignored the calls and tried to attack police”.

The Muslim Judicial Council, which was in swift contact with the mosque and Bassa’s family after the attack, said in a statement: “In a hostile attack on the police, the assailant was killed”.

It will now be the responsibility of the Independent Police Investigative Directorate (Ipid) to determine the events that led to the attacker’s fatal shooting. And while few may lament his death, his killing may have also put paid to the chance to find out what lay beneath his act of terror.

Bassa’s family say that the attacker appeared to be of Somali origin, and had said that he was in need of shelter while making his way from Bellville to Vredenburg.

Adjacent to the field where the attacker died, the St Thomas the Apostle Church became a makeshift media centre in the hours after the killings.

“We pray for the people of Malmesbury,” read a sign taped to the church door.

At its gates, a group of Somali locals gathered, conversing earnestly. When Daily Maverick approached, they turned away.

70 kilometres distant, in the commercial hub of Bellville known as “Somali-town” for its preponderance of Somali immigrants, news of the Malmesbury attack had reached locals by the afternoon.

Sasa’s offices were shut, as they have been since June 4 due to Ramadaan and Eid. Husein said he had no knowledge of the attacker’s identity, but confirmed that Malmesbury had a “quite big” Somali population.

Western Cape MEC for Community Safety Dan Plato has announced that plans are under way to meet the Muslim and Somali communities of Malmesbury in the wake of the attack.

That authorities are viewing the Malmesbury mosque attack as warranting a high priority investigation was evident from the fact that the Hawks speedily replaced local cops on the morning of the attack.

But when a long-delayed press briefing within the Malmesbury church eventually took place, it was clear that the Hawks were not willing to be any more forthcoming on the incident than the unit has been in recent weeks about the Verulam attacks.

“We have taken over the investigation,” Western Cape Hawks spokesperson Philani Nkwalase told journalists. “Certain issues are being ironed out.” He could not take questions, he explained. A statement would be issued as soon as possible.

More than a month after the Verulam attacks, meanwhile, police commissioner Khehla Sithole was called upon by Parliament to provide an update into that investigation.

“The Verulam investigation is a diverse investigation,” Sithole subsequently told eNCA, explaining that it involved the combined efforts of detectives, crime intelligence and the Hawks.

In analyzing the modus operandi of the Verulum attacks, Sithole said that the Hawks had determined that it was a “diverse modus operandi” which suggested “issues which would talk to national security”.

While he said that the Hawks “had progressed” with that investigation, Sithole said that no information would be given as to “how close we are to the suspects”. He did not elaborate further on any theories as to the motives for the Verulam attacks.

The Hawks say it is much too soon to speculate that the Verulam and Malmesbury attacks are linked, while the Muslim Judicial Council has warned against uninformed speculation.

But the wall of silence from authorities about the Verulam investigation has been a source of frustration and concern to other Muslim religious leaders.

Before the second attack, Claremont Main Road Mosque’s Imam Rashied Omar warned Daily Maverick that tensions were flaring within the Muslim community in the absence of any official answers as to what motivated the Verulam attack. A press conference scheduled to be held on June 11, 2018 by Islamic leaders in Cape Town had to be cancelled due to death threats and backlash against those calling for strengthened intra-faith solidarity.

On the eve of Eid, those tensions are certain to be heightened by the Malmesbury attack. And while calls for restraint about linking the two mosque attacks are sensible, parallels between the two are equally obvious. Mosques in two remote country towns have been targeted in knife attacks just a month apart: a type of violence hitherto unprecedented in South Africa.

As the sun set in Malmesbury, the bodies of the two men murdered in the mosque some 14 hours earlier were undergoing their last rites. Of the attacker’s body, there was no sign – but the effects of his brutal crime will not be made to disappear so easily. DM