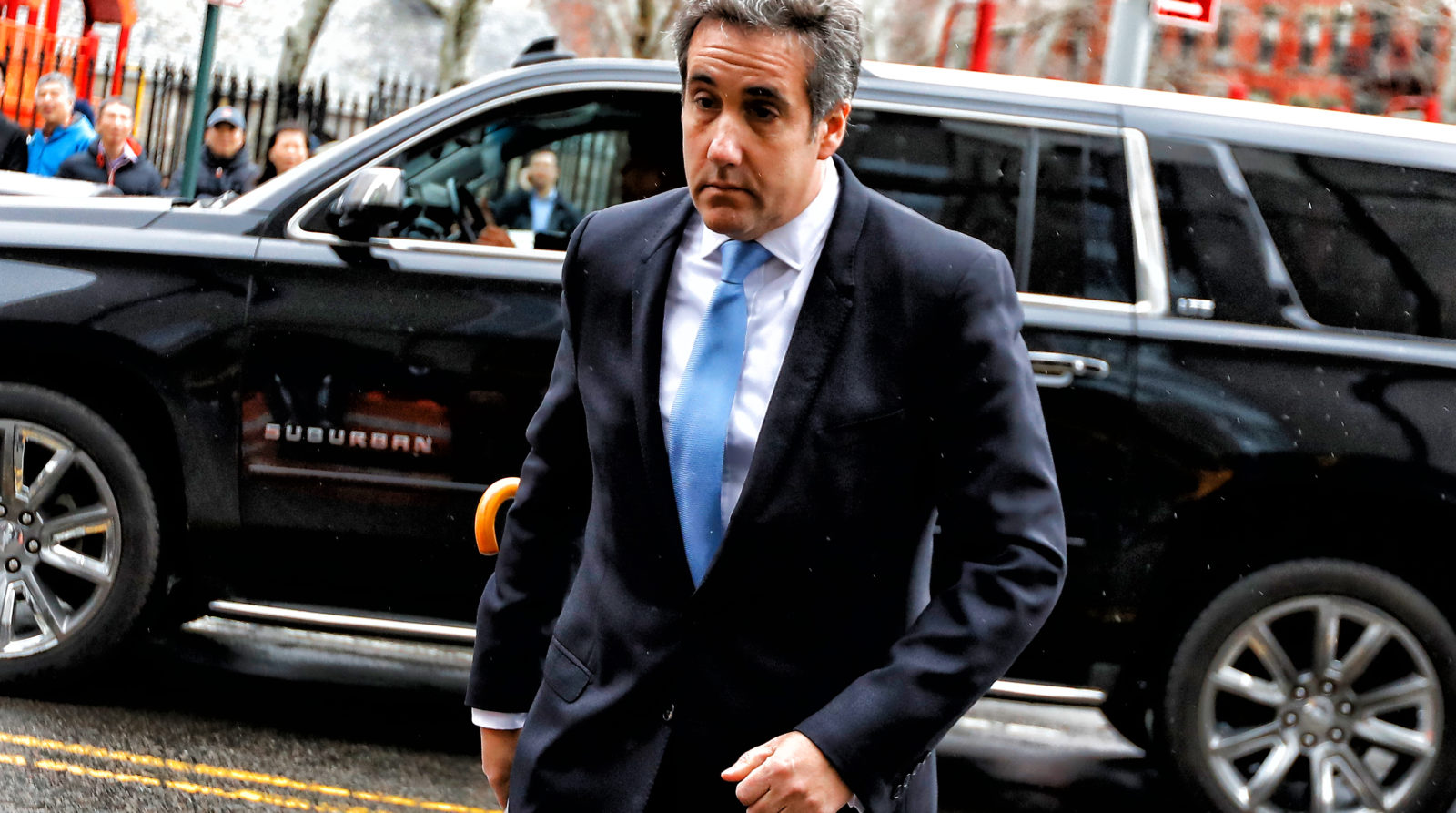 Former Trump attorney Michael Cohen seems to be about to sing his song about what he knows and when he knew about Donald Trump’s misdeeds. This will be a sad tune for the president, and it comes along as he is about to carry out several summit meetings in Europe.

This coming week will be very busy and eventful for the US president. In the next week and a half, Donald Trump is to make an increasingly contentious appearance at the annual Nato leaders summit in Brussels (he has already sent blistering letters to his counterparts accusing them of shirking their promised budget increases that if not addressed will force him to reconsider that whole Nato thing).

Then, if he survives the Nato meeting, there will be more to his trip. He is expected to carry out an equally fraught state visit to Britain. So far, at least, the Trump schedule seems to be a kind of state secret, so far, in order to keep the likely horde of demonstrators off their game, as various British cities declare he is not welcome in their precincts. Then, not surprisingly, he goes off to play golf at his Scottish golf club before he heads over to the Finnish capital of Helsinki to meet his favourite international buddy, Vladimir Putin.

This latter event, even before it happens, is leaving many foreign leaders and US foreign affairs analysts alternatively puzzled, amazed, and more than a little bit frightened. There is no obvious set of things the Trump administration says it wishes to discuss other than making Putin feel more love and some are worried he will give away whatever is left of the family silver to his beau.

However, back home in America, there are some worrying events that should (and may very well) have the Trumpians much more concerned than the supposed kung fu fighting scheduled for his international itinerary. These are, of course, tied to the welter of ongoing investigations of Trump and his curious relationship with Russia.

The most recent developments are related in some ways, but they are running on separate tracks, even though they may well end up converging in the same terminal as they wind up. Here we are speaking, of course, about both the Senate Intelligence Committee’s newly released findings on illicit Russian engagement in America’s 2016 election – and word’s out that Cohen appears to be in the process of casting off his heretofore “to the death” allegiance to Trump, and that he is getting ready to sing to the Feds. Cohen is the attorney who, until a few days ago, had the phrase “personal attorney to Donald Trump” emblazoned on his social media presence – until he took it off. Oops.

Cohen has had a long career in New York City as a lawyer, but also as a businessman who was sometimes in cahoots with various entrepreneurs with Russian or former Russian connections, especially in his ownership of New York City taxi medallions.

Medallions might seem like a rather prosaic investment, but when one owns hundreds of them (and they have traditionally been a very valuable, very expensive, limited issue licence to operate a cab in the city) and one’s partners have other interesting ties, alarm bells in the distance may start to ring softly but insistently.

Cohen has also, in the past, been known to buy and sell apartments in Trump buildings and, along the way, he had shopped himself as a consultant with special insights into the Trump presidency, even as questions have arisen about some reported travels to Eastern Europe as something of an errand boy for others then in the Trump administration.

At this point, there are three potentially worrisome tracks for the Trump forces to be concerned about, and Cohen may have interesting things to say about all of them. First is the Senate committee’s finding (contrary to the endlessly repeated mantra by Trump that there was no collusion, no help, no relationship, no co-operation, nada, nyet, nein) of a systematic involvement by the Russians in the US election, and that their goal was the election of Trump over his electoral rival, Hillary Clinton. Trump yet again repeated this in the past few days and offered that since Putin had told him there was none, ipso facto, there was none. So there.

But then there are two other parallel movements involving Trump’s now-famous, once and now recently former, bottom-feeding lawyer/bagman Cohen. As the pressure has begun to build on him, following the FBI raid on his office, home, and hotel room several months back at the behest of federal prosecutors in New York, Cohen has begun progressively backing away from his previously unwavering defence of his client, Trump (almost Stalingrad-like you might say if you were of a mind to be comparatively speaking).

Instead, he has now begun telling people that his loyalties are to his family and nation. It is telling to note the omission in that list of loyalties to anyone by the name of Trump.

Thinking ahead, this volte face may well become truly catastrophic for the Trump defence against all the accusations being flung at him, for two reasons. The first is that Cohen, from all those years carrying out clean-up jobs for Trump (such as that reported $130,000 payoff to Stormy Daniels to keep her from talking about her affair with Trump, just as the 2016 campaign reached its final weeks), almost certainly knows some interesting and presumably sordid details of any number of Trump deals and dodges – and has them documented.

That would mean the federal prosecutors have some of that paper or electronic documentation as well from their raids on his office/home/hotel room. With his growing co-operation (assuming the deal is worked out for lesser prosecution if he would just sing like a canary, as it were), they are in a better position to connect those dots.

After all, to make payments like the one in the Daniels affair, there ultimately will be some paper or cybertrail somewhere, somehow – even if Cohen ultimately carried the loot in a shopping bag packed to the top with lots of Ben Franklins tied in neat bundles. You can’t simply take money like that out of a bank account without at least some kind of paperwork trail being created.

And such incriminating trails could well open up the man who is now president to face subsidiary charges of tax evasion or failure to file the appropriate documentation for various things, any number of other ways. For clarification’s sake, it is not illegal to have an affair outside of one’s wedding, even though your wife might not be so happy about it, but it probably would be illegal if the payments that flowed from shushing Daniels about that tryst might logically be defined as a non-reported campaign expenditure. Uh-oh. Cue the sounds of that Washington swamp filling up, rather than draining out.

The second aspect to this development is that given Cohen’s proximity to Trump, if there are connections to less than honest, less than four-square, less than straight arrow, other than upright, or – worse – are tied somehow to the Kremlin via the financing of any of Trump’s enterprises or sales of property, there are whole cascades of potential improprieties or criminal things just waiting to come slithering out.

Of course, if Cohen is aware of the truth (and has evidence) of any of the even more insalubrious accusations of Russian efforts to entangle Trump during his beauty contest in Moscow days, such as something that points to activities reported in the so-called “Steele dossier”, then that would be even more embarrassing. Any of these could lead to criminal charges or, even, potentially, force the hand of even a timorous Republican congress to consider the I-bomb, i.e. charges filed on impeachment.

Somewhere deep within the Trump legal phalanx, given Cohen’s now telegraphed decision to jump ship and go over to the Feds, there surely is a damage control team trying to figure out just what Cohen knows, and when did he know it. And what he is about to confirm for the Feds to allow them to draw the inevitable lines back to Trump, the Russians, and/or criminal activities. Oh dear.

Hey, wait a minute, aren’t those almost the same questions – what did he know and when did he know it – that Republican Senator Howard Baker famously asked about President Richard Nixon during the Watergate hearings that had helped seal Nixon’s fate back in 1974? (Okay, for purists, this time around the questions might be phrased as: What did they do, and when did they do them?) Is it time to cue ominous drum roll background music whenever Trump or Cohen or Paul Manafort or any of the others appears on television screens?

The original version of those questions had flowed inevitably from the unanticipated public revelation during congressional hearings in testimony by a rather junior White House aide, Alexander Butterfield – almost exactly 45 years ago, on 13 July 1973.

Butterfield had let it slip that there was a secret taping system in the White House to record conversations in the president’s Oval Office. Butterfield’s description of the taping system, and thus the revelations from the recordings, had shed baleful light on what had been said and what happened among presidential advisers and with the president in the days just after the Watergate break-in, carried out by incompetent operatives paid by the Nixon re-election campaign organisation, in their efforts to gather intel on their Democratic rivals in their Watergate office building suite.

At this point, Trump’s insistence that there was no collusion with a non-existing Russian cyber penetration effort is beginning to take on some water. The Senate committee’s report – a bi-partisan one – confirms the overall intelligence community’s earlier conclusion that there was a significant effort by the Russians to affect the 2016 election.

Simultaneously, special prosecutor Robert Mueller’s investigations into the matter are continuing, as a slow but steady stream of indictments and admissions of guilt by Trump former aides rolls forward. Concurrently, Cohen appears to be manning up to sing his sad song to federal prosecutors about a whole string of misdeeds.

None of this is going to make the Trump administration happy, and it is certainly going to make every word he says to Putin, every smile, and every handshake deal to do who-knows-what mischief all come under intense scrutiny. This, of course, also comes as the great victory Trump had claimed from his meeting with North Korea’s Kim Jong-un increasingly seems to be a chimera. This will not be an easy, pleasant or productive trip for the president. But what comes after that may be even more uncomfortable. DM