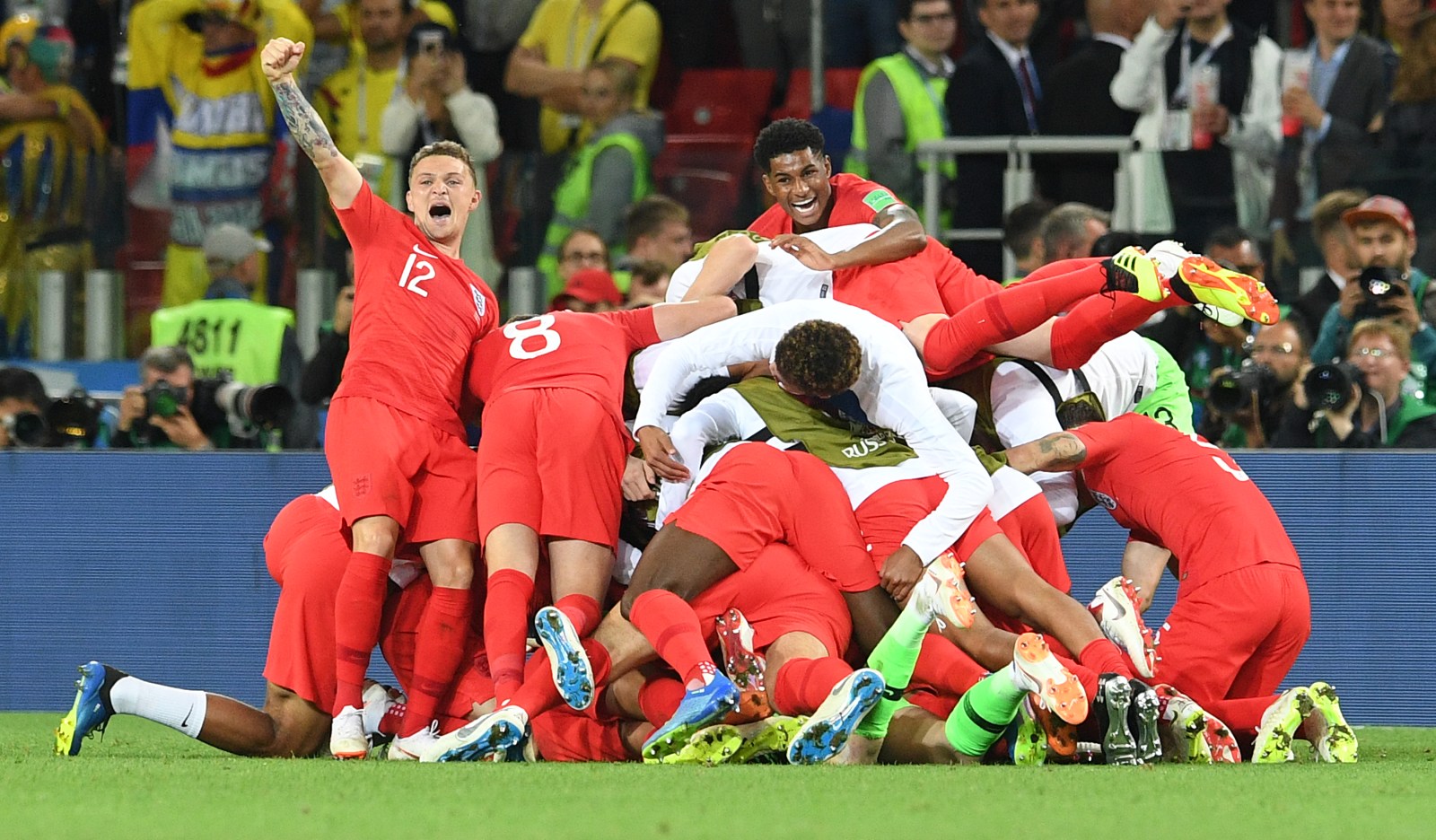 England players react after winning the penalty shootout during the FIFA World Cup 2018 round of 16 soccer match between Colombia and England in Moscow, Russia, 03 July 2018. EPA-EFE/FACUNDO ARRIZABALAGA

England winning on penalties after going peak England in extra-time... the 2018 World Cup keeps on giving.

For the third time in the knockouts, the quarter-finalist was decided through penalties. After Sweden and Switzerland was decided in a rather dreary one-goal only match, Colombia and England turned up the heat.

Scrappy and out of control and eventually, penalties. Would it be anything else?

The last 16 has delivered more than expected, surely modest 1-0 wins now await in the remainder of the knockouts.

There are scrappy matches. Then there are borderline street fights masquerading as football matches. This was somewhere in between, but everyone involved would have come out looking better if they just decided to take it outside.

At no stage did referee Mark Geiger look like he had any control of the match. That might be the way things are done in America, but in a World Cup that has been such a delight, it didn’t look pretty.

Right from the get-go, it was clear that Colombia’s strategy was to play rough. It worked, England looked cagey and rattled in the first half, but so much of the theatrics could have been avoided if Geiger just reached for a red card instead of putting up with all the shouting in his face.

It takes a special effort to make Neymar’s behaviour look rational, yet Colombia somehow managed to do just that.

That’s not to say England weren’t guilty of moments of madness, but that the South Americans survived for the full 120 minutes without a single red is somewhat staggering. There were a total of eight yellow cards – no other match at the 2018 World Cup had produced that many – and no other team has seen more than Colombia.

Harry Kane’s penalty was cancelled out by a Yerry Mina header in the dying seconds of stoppage time, propelling the match into peak England territory. In extra time, all 22 froze. And so penalties came.

When Jordan Henderson missed, it must have felt like deja vu for the traumatised English. But then Mateus Uribe hit the crossbar and Jordan Pickford pulled off an epic save to stop Carlos Bacca and the Three Lions go marching on.

So much for Swiss precision. Painfully dull and bereft of quality, even with the lowest of expectations, the final third was barren boulevard of wasted chances for both teams.

After two penalty shootouts and a whirlwind fixture between Japan and Belgium, this match was always at risk of being one of the worst of the last 16 and it was, so at least it matched expectations.

For a Swiss side that has, at times, showed some dynamic attacking, it was a bit of a damp squib, while Sweden’s approach remained utterly dull.

We could pass up the opportunity to reference the kind of boxed-in, flat-pack style of play Sweden have adopted at this World Cup, but then this would just be a normal match report.

A lone Emil Forsberg goal in the second half, deflected not aimed, secured Swedish qualification for the last eight at a World Cup for the first time since 1994.  DM