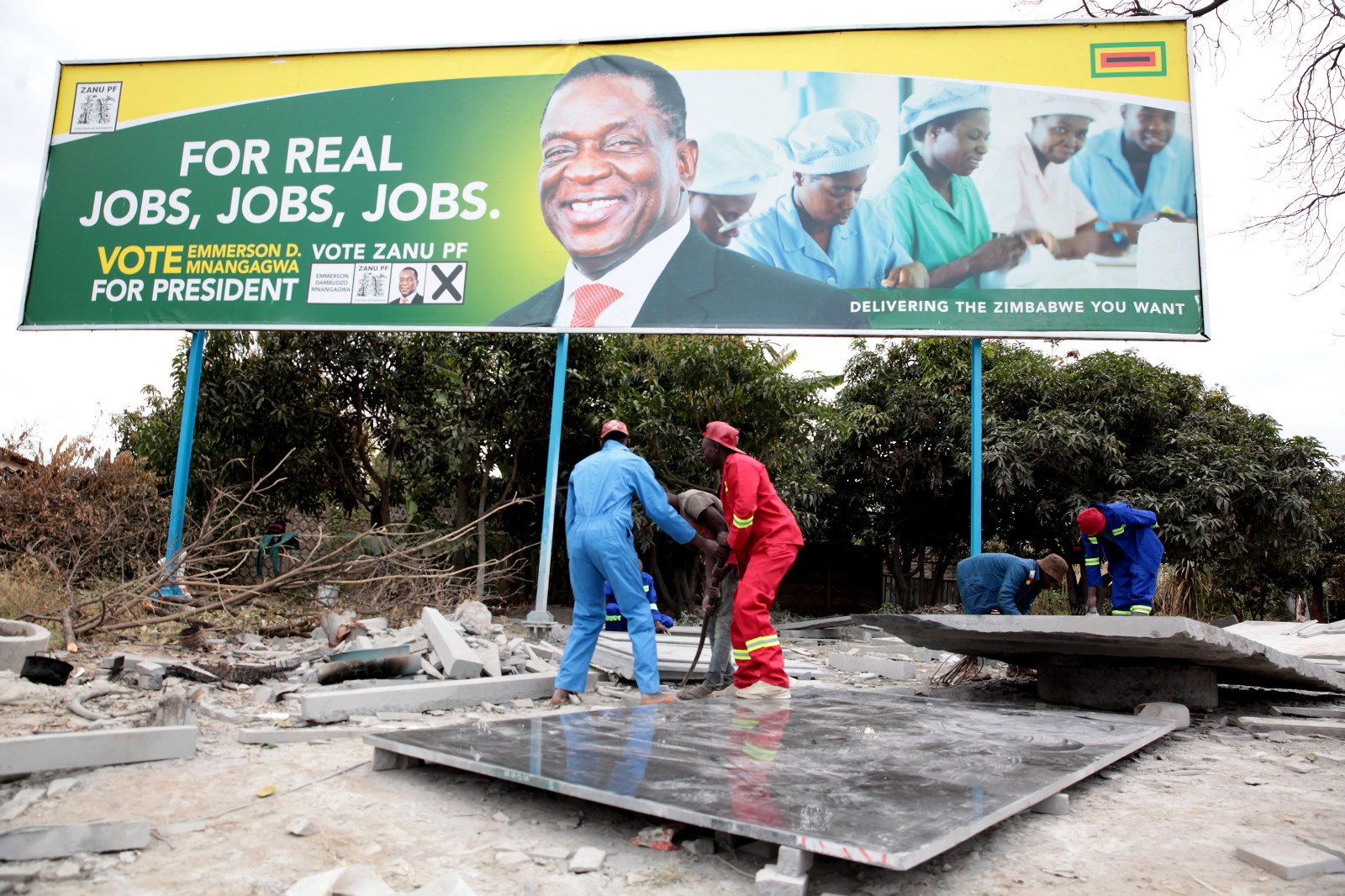 With Zimbabwe’s first post-Mugabe elections a month away, there seems to be a freer atmosphere than in previous polls, but the air is not entirely devoid of fear and suspicion, including of the body tasked with ensuring a free and fair vote.

President Emmerson Mnangagwa literally looms large above the bustling streets of Harare: his smiling face beams down from giant billboards all over the city. Zimbabweans are gearing up for critical elections on 30 July, the first in decades not to feature Robert Mugabe and the late Morgan Tsvangirai on the presidential ballot.

Can the country conduct peaceful and legitimate elections, and who is most likely to win? After the explosion at a Mnangagwa rally in Bulawayo on 23 June, these questions are especially pertinent.

The mood in Harare is of cautious expectation. Many feel greater freedom to assemble, speak about politics and mobilise for the elections since Mugabe’s ousting in November 2017.

Twenty-three presidential candidates registered – up from the usual just two or three – saying as much about fractious opposition politics as about citizens demonstrating their democratic right to stand for office.

The formerly ubiquitous bribe-seeking police and Central Intelligence Organisation have dissipated. It is no longer dangerous to point your finger at the president’s office building.

But beneath this veneer of freedom, a deep and lingering distrust of Zanu-PF and the military remains. We heard the saying “the leopard cannot change its spots” several times throughout our visit.

In contrast to past elections, opposition rallies have received media coverage by the state-owned media. Nonetheless, a recent Media Monitors report showed that for every 1,456 seconds dedicated to Zanu-PF coverage on television, just 116 seconds are allocated to the opposition Movement for Democratic Change Alliance.

Opposition parties have raised several concerns regarding the election process. Central to their unease is the independence and integrity of the Zimbabwe Electoral Commission (ZEC). It delayed releasing the voters roll – the source of much controversy in previous polls – preventing the verification of its accuracy.

The security of the printing and handling of the ballot papers is also a serious concern. In response, ZEC has stuck to the letter of the law, doing little to assure the public of its impartiality, despite legitimacy being so vital in this election.

Some remain unconvinced that the military could accept an opposition win after the November 2017 coup. ZEC has also been accused of militarisation, with reports of subtle voter intimidation in rural areas by plainclothes military officers.

The atmosphere in the countryside contrasts with the capital. Memories of violence and intimidation around previous polls remain fresh there.

“They remember the violence that followed 2008’s run-off,” says Obed Masawure, president of the Amalgamated Rural Teachers Union of Zimbabwe.

With a date for a possible run-off mooted for early August, Masawure wonders if Zanu-PF are “capitalising on the fear of the past”.

His concerns are contextualised by the increased use of military personnel for administrative election purposes in rural areas – roles previously assigned to teachers.

The registration rate and voting patterns in rural areas will, as always, be crucial. These voters previously supported Mugabe, out of fear or loyalty. Analysts claim that the new biometric voters’ roll is skewed towards rural as opposed to urban registration numbers – another contentious issue.

They also believe this election will be won or lost on youth votes – some 43% of Zimbabweans are aged between 18 and 25, but no one knows how many have registered to vote.

Many first-time voters suffering under a decimated economy may be swayed by the charismatic and youthful Nelson Chamisa (aged just 40; Mnangagwa is 75).

While Chamisa has brought a breath of fresh air to Zimbabwean politics, he leads a splintered opposition, which, just weeks before elections, is still squabbling over primaries, constituencies and party logos. In comparison, Zanu-PF is more organised.

When asked what they thought the role of South Africa should be during the elections and beyond, the South African Embassy in Harare replied that “South Africa is ready to work with anyone who wins in a free and fair way”.

However, it does raise a question about what Pretoria and the region’s stance would be if there are lingering questions about the credibility and fairness of the elections.

They welcomed the possibility of a Government of National Unity (GNU). Several people we spoke to shared this sentiment, saying that it is not only a likely outcome, but perhaps the safest, allowing room for both sides during this important transition. Others say the last GNU did Zimbabwe more harm than good.

Whichever way these factors play out on the ground come 30 July, one thing is clear: the Zimbabwean people are more expectant and hopeful than ever before. The international community needs to do all it can to allow them to fulfil their aspirations. DM

Steven Gruzd is the head of the African Governance and Diplomacy Programme at the South African Institute of International Affairs (SAIIA) and Cayley Clifford is a SAIIA-Konrad Adenauer Stiftung Scholar. They conducted research in Harare from 12-15 June.