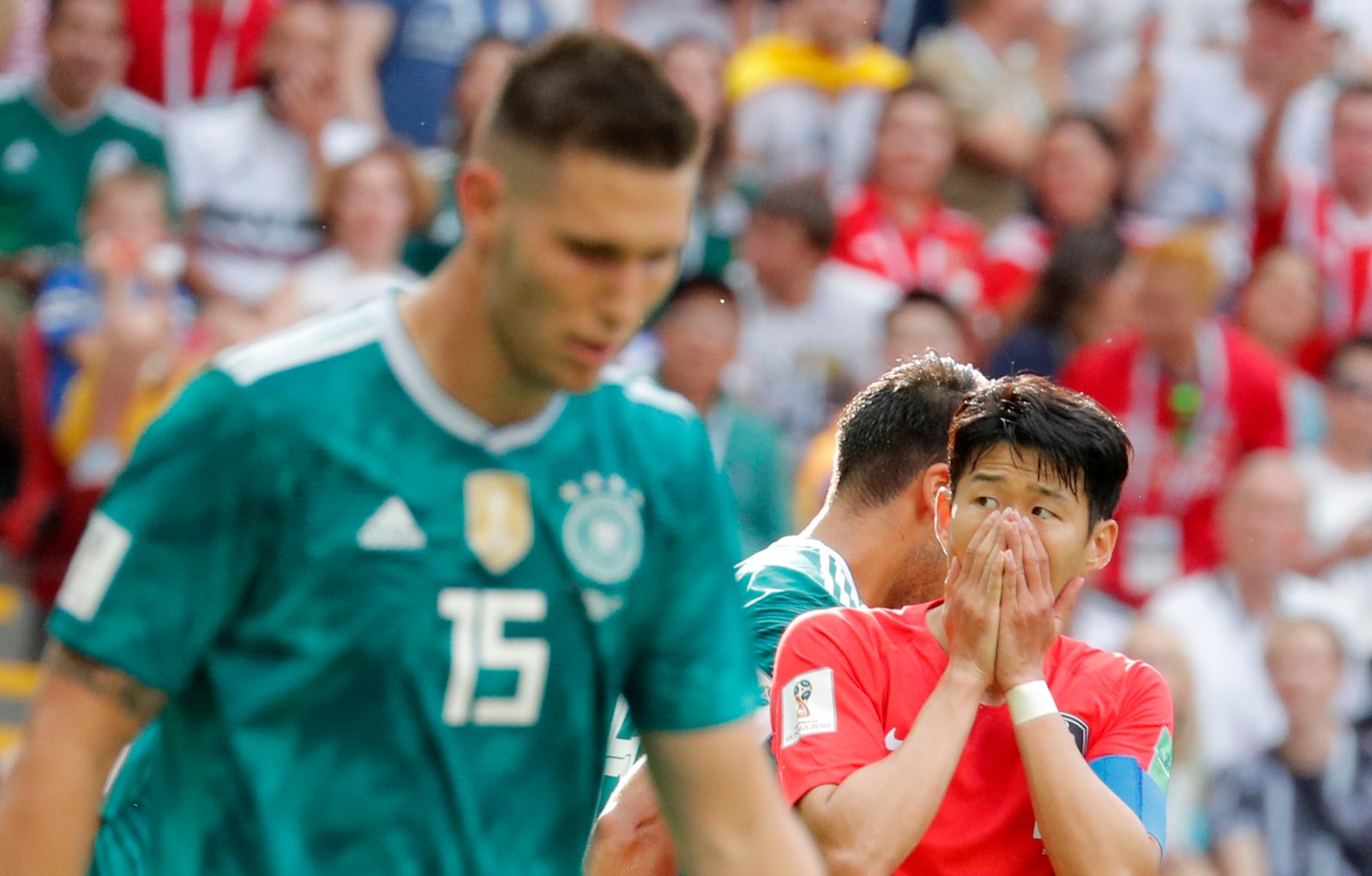 Holders Germany crashed out of the World Cup in the group stage on Wednesday as Sweden and Mexico qualified on a day of incredible drama in Russia.

Germany crashed out of the World Cup on Wednesday after a stoppage-time VAR-assisted goal from Younggwon Kim and a late second by Son Heungmin earned South Korea a famous 2-0 win.

The Germans needed to beat Korea by two clear goals in their final group F match at Kazan stadium to advance to the last 16.

But Joachim Loew’s men wasted a series of chances in a tense match that saw a pale version of the world champions become the fourth holders of the title this century to be sent packing at the first hurdle.

Germany’s team of superstars could only look on in shock in the final minutes of the match as US referee Mark Geiger called for the video assistant referee to intervene after the unmarked Kim had bundled his shot past Germany ‘keeper Manuel Neuer from a corner early in stoppage time.

The goal was awarded because Toni Kroos’ touch had played him onside, and minutes later Germany were 2-0 down after Neuer ran up the pitch in a desperate attempt to get a goal.

It means Germany, the four-time champions who had competed in the past 16 editions of the World Cup, fail to make it past the first hurdle of the tournament since 1938.

Germany coach Joachim Loew caused a surprise by leaving midfield attacking stalwart Thomas Mueller on the bench for the first time since 2012 after his underwhelming displays against Mexico and Sweden.

But by the end of a frustrating opening half, Loew was left desperately studying his options.

Germany suffered the first of several scares after South Korea won a free kick on the quarter hour when Sami Khedira’s boot connected with the head of Jung Wooyoung.

From 30 yards out, it should have been fodder for World Cup-winning goalkeeper Manuel Neuer, but after fumbling Jung’s dipping drive Neuer scrambled desperately to clear as Son raced to pounce.

Marco Reus, who hit a crucial leveller in the 2-1 win over Sweden, saw his drive deflected and Mesut Ozil saw his effort deflected off a Korean boot and out for a corner, after which goalkeeper Hyeonwoo Jo smothered desperately when Goretzka’s header found Hummels trying to pounce on the loose ball.

Germany resumed with more urgency after the interval, but despite edging closer when Loew introduced Mario Gomez just before the hour the big Stuttgart striker headed straight at Jo from Kimmich’s cross.

Striker Timo Werner then met another Kimmich ball from the left byeline with a right-foot volley that skewed agonisingly wide of Jo’s upright.

Germany urgency was not matched by their normal efficiency and soon legs started to tire.

Loew played his final card when he introduced Mueller for Leon Goretzka.

WATCH: Son Heung-min's goal was the final nail in the coffin for #GER who have exited the FIFA #WorldCup after a 2-0 defeat to #KOR.

But the late changes failed to spark Germany into life as Korea hung on for a famous win that, unfortunately for the impressive Asians, saw them bow out after Sweden beat Mexico 3-0. DM