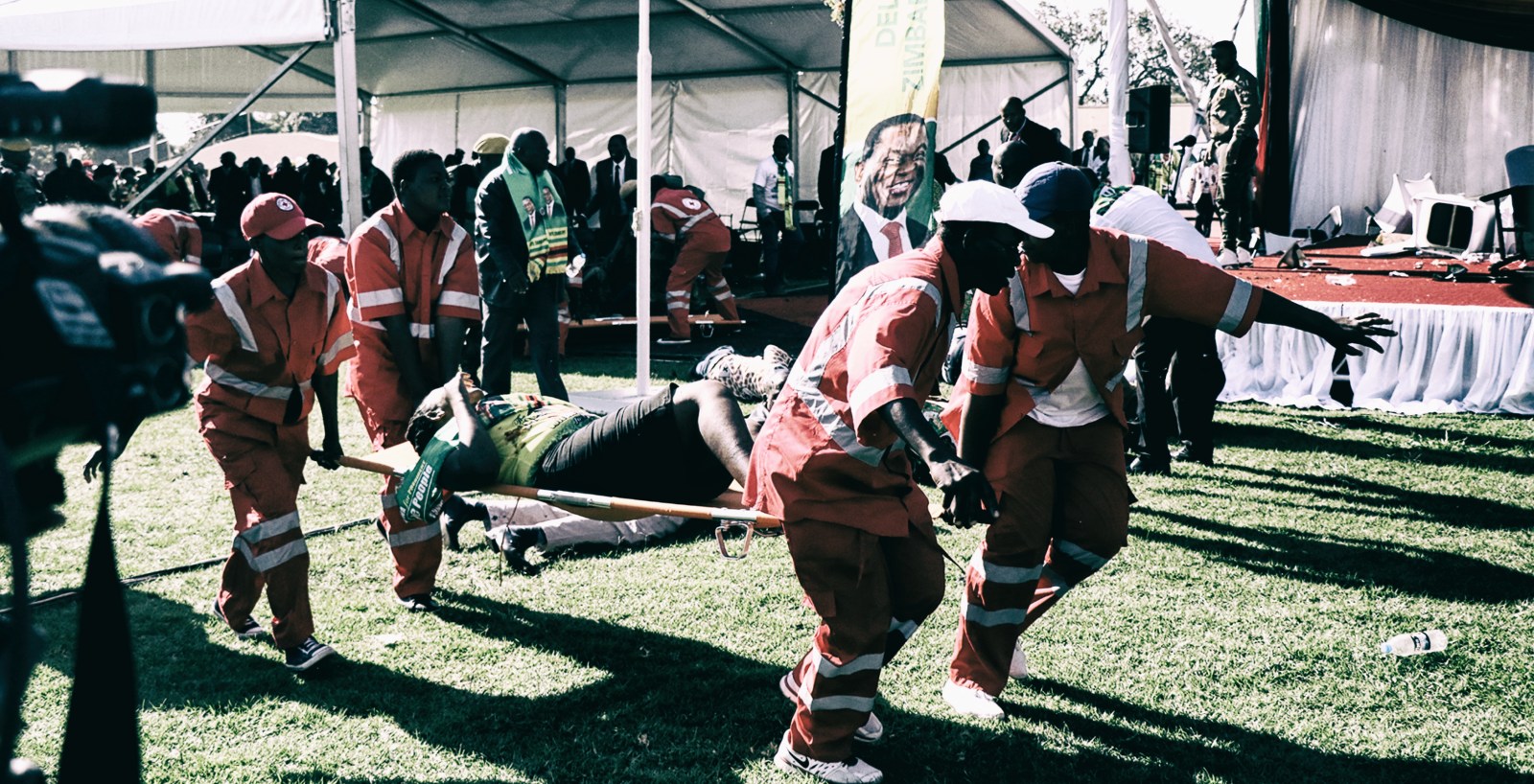 Members of the Zimbabwe Red Cross Society (ZRCS) carry an injured woman after a suspected bomb went off at a rally addressed by President Emmerson Mnangagwa, at White City Stadium in Bulawayo, Zimbabwe, 23 June 2018. EPA-EFE/STRINGER

Zimbabwe’s President Emmerson Mnangagwa says an assassination attempt which he survived on Saturday during a rally in Bulawayo was not engineered by locals in the country’s second city but by “outsiders”.

Mnangagwa survived an assassination attempt after an explosion at White Stadium in Bulawayo where he was addressing a campaign rally ahead of the 30 July elections.

An explosion believed to be from a hand grenade sent people running for cover with reports indicating that 49 people including Vice President Kembo Mohadi and Water and Environment Minister Oppah Muchinguri had been injured in the skirmishes and were admitted to various Bulawayo hospitals.

Mnangagwa and Zimbabwe’s other vice president, Constantino Chiwenga, escaped unscathed and were whisked away to the State House in the second largest city. Unconfirmed reports say at least two people were killed.

This is the first time that an attempt has been made on the life of a sitting President in Zimbabwe although Mnangagwa survived five assassination attempts when he was still vice president of the country.

Speaking to the state broadcaster, the Zimbabwe Broadcasting Corporation (ZBC), on Saturday, President Mnangagwa said he believes the attempt on his life was from outsiders, not people from Bulawayo.

“People outside Bulawayo (attempted to kill me) and these are my normal enemies as this is not the first time, as they have been various attempts,” Mnangagwa said.

Although no groups have claimed responsibility for the attack, it is widely believed it was an intra-party affair. Analysts suspected elements from the G40 formation, which supported ousted former President Robert Mugabe, could have been involved in the attack.

“The authorities must swiftly and thoroughly investigate the incident and hold accountable those responsible. Zimbabwe should have free, fair and credible elections,’’ Mavhinga said.

The attack on Mnangagwa comes as the opposition MDC Alliance led by Nelson Chamisa declared that they would make the running of this year’s elections impossible if the Zimbabwe Electoral Commission (ZEC) continued to ignore their demands for electoral reforms before the plebiscite.

However, in apparent defiance, the ZEC chairperson declared that only an earthquake would stop the elections, a clear indication that the electoral commission is not ready to reform and make the electoral playing field even.

Despite concerted demands by opposition political parties and other stakeholders for the implementation of electoral reforms, ZEC declared that elections would go ahead with or without electoral reforms and that aggrieved parties can only challenge the election results.

Commission chairperson Priscilla Chigumba, in her inaugural weekly media briefing, declared that only an “earthquake” would stop the Zimbabwe poll. The remarks by Justice Chigumba all but dashed any hopes that the country’s opposition had of meaningful electoral reforms, with less than 40 days remaining before the make-or-break polls, which have raised unprecedented interest from across the globe.

The ushering in of a new dispensation following the 14 November 2017 coup d’état (called Operation Restore Legacy) against former President Robert Mugabe had brought a ray of hope to a country torn by civil strife.

That President Mnangagwa, who took over from Mugabe, declared that he would conduct free, fair and credible elections was even more reason for Zimbabweans to believe that now was the time for them to chart a new path for the country by freely voting for a leader of their choice.

But the statement by Chigumba is a clear indication that the electoral commission is not ready to reform.

Opposition parties and political analysts were not surprised, saying Chigumba had confirmed their long-held view that the ZEC would not reform the ruling Zanu-PF out of power as it was clear the ruling party would lose a free, fair and credible election.

Douglas Mwonzora, secretary-general of the main opposition MDC-T led by Nelson Chamisa, said the electoral commission was complicit with Zanu-PF.

“What it shows is lack of impartiality and independence on the part of ZEC. The reforms we are asking for are lawful, sensible and achievable,” he said.

Mwonzora said they were filing a High Court application, adding that they were worried by a statement by Vice President Constantino Chiwenga that Operation Restore Legacy was not yet over. Currently the electoral commission has several court cases which have been filed against them.

Derek Matyszak, Institute for Security Studies senior research consultant, said the implication of Chigumba’s statement is that the electoral body is not impartial.

However, Matyszak said that the electoral reform issues being raised by opposition political parties were not significant and that elections could be held without them. He added that the political terrain is uneven and not conducive to free and fair elections, though certain areas have been addressed.

Senior Researcher at the Research and Advocacy Unit (RAU), Tony Reeler, said Justice Chigumba was between a rock and a hard place in being in charge of this election.

“One thing that can stop this election is if the MDC-Alliance feel the electoral field is skewed and pulls out of the race,” Reeler told Daily Maverick, adding that credibility is key in this election and Justice Chigumba should resolve these pertinent issues if they affect the credibility of the election.

The involvement of the military in issues of governance has been raised by many. It is yet to be seen whether the military will remain in the barracks, considering its key role in the ousting of Mugabe in 2017.

Observer mission the International Republic Institute and National Democratic Institute raised the need for a public commitment by the military to serve the winning presidential candidate regardless of their party affiliation. DM

The writer is a journalist based in Zimbabwe. The writer’s name has been withheld for safety reasons.