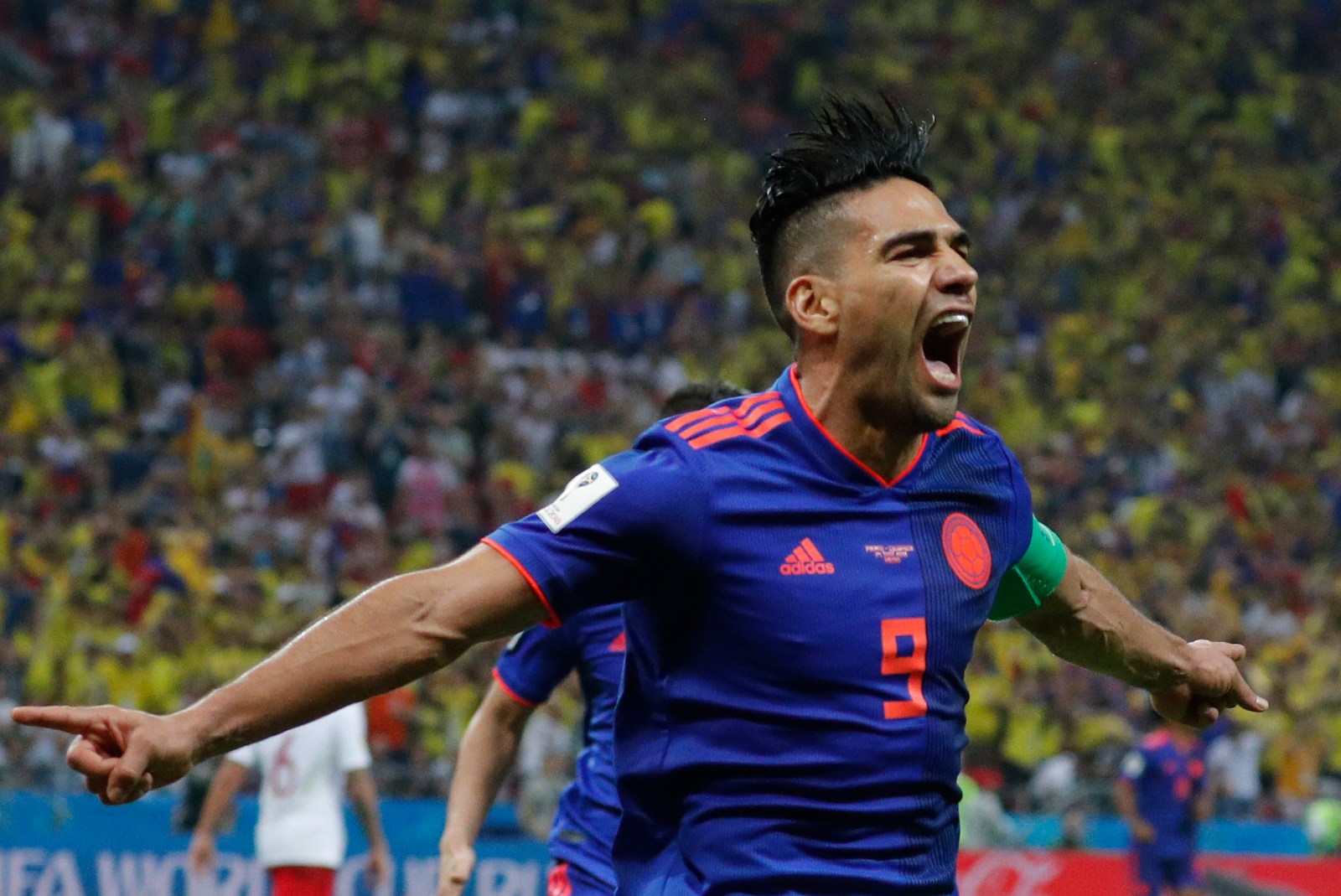 Radamel Falcao of Colombia celebrates after scoring the 0-2 goal during the FIFA World Cup 2018 group H preliminary round soccer match between Poland and Colombia in Kazan, Russia, 24 June 2018. EPA-EFE/ROBERT GHEMENT

Colombia brushed aside Poland 3-0 in Kazan on Sunday to boost their hopes of reaching the World Cup knockout stage as captain Radamel Falcao starred with a goal and an assist.

In a match destined to see the loser sent home after the group stages, Colombia overcame a nervous start against Adam Nawalka’s men to move up to third place in Group H, one point behind Japan and Senegal.

The disappointing Poland became the first European side eliminated from the tournament.

The South Americans’ bid for a place in the last 16 will be determined by the results from their final game with Senegal, who drew 2-2 with Japan earlier in the day.

Colombia’s march to the quarter-finals in Brazil four years ago came thanks to James Rodriguez’s six-goal tally for ‘Los Cafeteros’.

And days after a troublesome calf injury restricted him to a half-hour cameo role as 10-man Colombia stumbled to a 2-1 defeat against Japan, the Bayern Munich midfielder was back to his best.

Starting alongside Juan Quintero and Cuadrado on the right, Colombia’s ultra-offensive starting line-up was a forewarning.

After riding a tense start that forced Mina and then Wilmar Barrios to react quickly to thwart early threats from Robert Lewandowski, Colombia eventually got into their stride.

Cuadrado was wasteful on several occasions when finding space deep on the right flank.

The Juventus winger’s trickery would eventually pay dividends, but it was Falcao — who has dreamed all his life of scoring a World Cup goal — who turned on the style, dancing through the Polish defence to win the corner that led to Colombia’s opener.

Rodriguez’s short corner eventually found Quintero, whose smart through ball back to Rodriguez gave him time and space to curl a perfect left-footed cross that Mina rose to header powerfully past Szczesny on 40 minutes.

Colombia resumed in positive fashion, Cuadrado holding up well to set up Falcao for a first-time drive that sailed over Szczesny’s crossbar.

A Colombia counter saw Falcao’s drive from the edge of the area deflected out for a corner.

Only the bravery of goalkeeper David Ospina saved Colombia from conceding what looked like the equaliser when he rushed out to block from Lewandowski after the Bayern Munich striker did well to get a shot away from a long ball from midfield.

Poland threatened again, but when Lewandowski got his head to a cross into the area he was marked by both Mina and Davinson Sanchez.

Colombia, however, were not to be denied.

When right-back Sanitago Arias found Quintero, the midfielder sliced Poland’s defence apart with a low pass that found Falcao on the run before he beat Szczesny down low with the outside of his right boot.

Five minutes later, Rodriguez produced arguably the assist of the night, drawing several Polish players on the left flank before somehow finding Cuadrado on the run with a superb cross-field pass that the pacey winger tucked away. DM