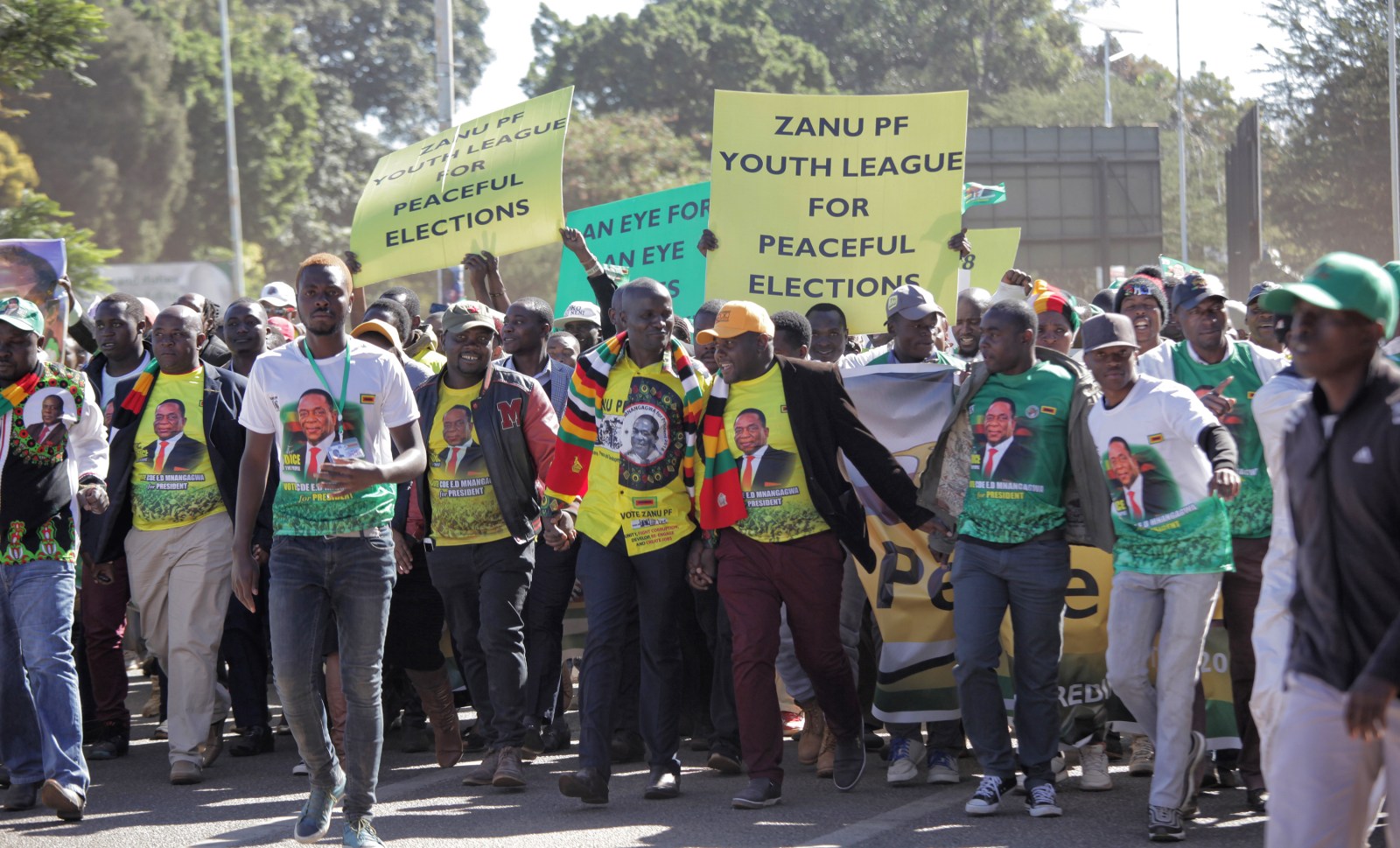 The poor turnout for a Zanu-PF march in Harare raises questions about how popular the party of ousted former president Robert Mugabe really is, and what this could mean for the elections slated for 30 July 2018.

A few hours after a successful march by the Movement for Democratic Change (MDC) Alliance to protest against the Zimbabwe government’s snail’s pace in the implementation of electoral reforms ahead of the make-or-break harmonised elections slated for 30 July, an attempt by the ruling Zanu-PF to stage a counter march backfired spectacularly after a handful of supporters turned up at Freedom Square in Harare on Wednesday.

The Zanu-PF youth league, in an apparent reaction to the MDC Alliance, had called for a demonstration on Tuesday to show solidarity with President Emmerson Mnangagwa’s calls for free and fair elections, but were denied by the Zimbabwe Republic Police (ZRP).

But Zanu-PF Youth League Harare Provincial chairperson, Godwin Gomwe, claimed that police had advised them to reschedule the march to avoid violent clashes involving supporters of the two parties.

On Wednesday, scores of Zanu-PF supporters milled around Freedom Square, where the march was supposed to have started, almost three hours after the scheduled start of the march, pondering their next move as it became apparent it was not going to succeed.

Observers said the poor turnout for the Zanu-PF march had also proved the long-held view that Zanu-PF previously forced people to its events.

The few supporters who had gathered to partake in the march appeared not to be aware of the reason for the planned march.

Those who spoke to Daily Maverick said they were not even sure what they were supposed to do, save to say they had been asked to come to show support for President Mnangagwa.

“I am not sure what is going to happen now because we were supposed to have started marching a long time ago, but from the turnout here I don’t think we will be marching any more. I hear they now want it to be a rally which will be addressed by some senior party members,” said Felix Chitongo from Harare.

That was in sharp contrast to the responses by the people who attended the MDC Alliance march on Tuesday, who were clear on their reasons for taking to the streets; that they wanted the Zimbabwe Electoral Commission (ZEC) to implement electoral reforms before the elections.

Those who spoke to us, including the elderly, could easily articulate the issues they wanted addressed.

It was clear from the determination and zeal exhibited by the alliance demonstrators that they had real issues they wanted addressed by the regime, hence the success of their demonstration, arguably the biggest by the opposition, or any other group so far in 2018.

That the failed demonstration came after the Nelson Chamisa-led alliance had almost brought the city of Harare to a standstill on the previous day dealt a huge blow to President Emmerson Mnangagwa, as it seemed to expose his unpopularity.

Although President Mnangagwa had indicated that he would not brook any violence during the election period, the calling of a solidarity march by his supporters, apparently as a reaction to the MDC Alliance march, had raised fears of violent clashes.

Political analyst, Eldred Masunungure said the fact that the MDC Alliance was allowed to march reflected the relaxed political atmosphere that was currently prevailing in the country.

He said the current environment provided for freedom of speech and assembly, which was unheard of during the reign of former President Robert Mugabe, adding that it was good for both the ruling party and the opposition players as it showed tolerance of diverse views.

Senior Researcher at the Research and Advocacy Unit, Tony Reeler, said the failed march by Zanu-PF was reactionary but it was banned on Tuesday because the government was not willing to have a bloody clash which would have tarnished its image ahead of the polls.

“The MDC Alliance has every right to protest as they have genuine concerns which they wanted addressed by the electoral body to ensure a level playing field,” Reeler said.

However, Reeler pointed out that chances of genuine free and fair elections were remote, especially after the November military takeover.

“The military has very strong interests and as such cannot accept any outcome not in their favour,” he said.

However, although the government allowed the opposition to freely demonstrate without interference, and has on several occasions pronounced its readiness to hold credible, free and fair elections, its sincerity remains questionable considering its lack of political will to meet the demands for electoral reforms. DM