MYSTERIES OF THE TRUMPIAN MIND

Can Trump’s Foreign Policy process be understood – before it’s too late? 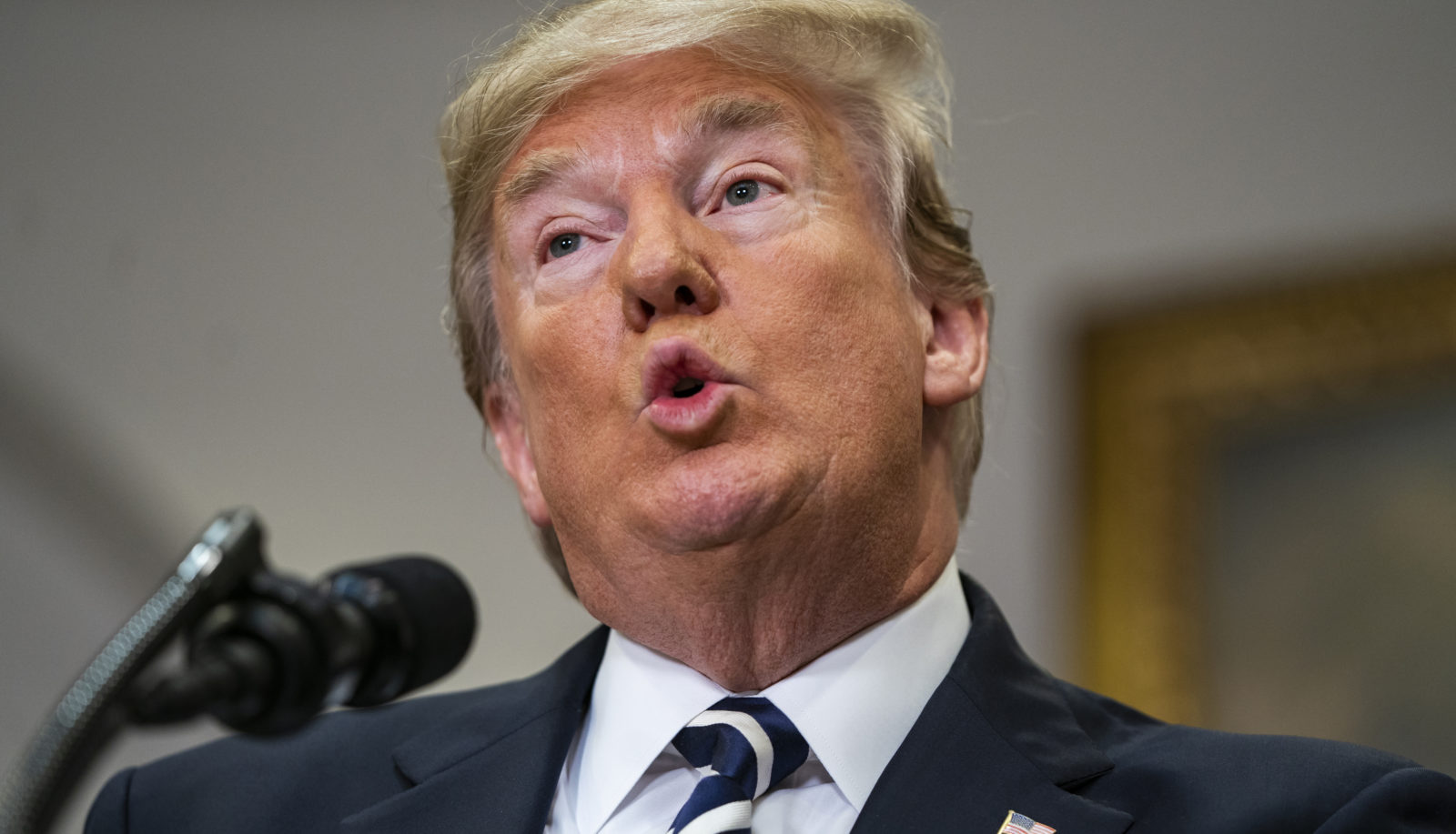 US President Donald J. Trump speaks about his cancelling the summit in Singapore with North Korean leader Kim Jong-un in the Roosevelt Room of the White House in Washington, DC, USA 24 May 2018. Trump said it is now up to the North Korean leader to seize the opportunity. EPA-EFE/JIM LO SCALZO

The snarls over international economic policy in the Trump administration complement and complicate his dealings with North Korea, Iran, and all the rest. Hope for the best, but keep your hazmat suit handy just in case.

‘A fool lies here who tried to hustle the East’

— Rudyard Kipling from his novel, Naulakha

Just for once, let us forget about all those barbaric yawlps that emanate from the Trump White House on an hourly basis against all his enemies, real, feigned, or totally imaginary, across the American domestic landscape. Let’s even put aside, for the nonce, his unrelenting campaign to defame the investigators and the special prosecutor over Russian activities during the US election, and to disrupt and wave away all of the investigations into the extent of those Russian efforts to affect the outcome of the 2016 election.

Let’s even put aside his lazy, heedless way of failing to pay sufficient attention to the actual details of public policy, law, and even his own administration much of the time. For today only, we will put aside his astonishing habit of frequently contradicting himself in an unceasing flood of those damned tweets, with their grammatical mistakes, his unique spelling, capitalisation, turns of phrase, and the astonishing punctuation.

Oh, and let’s ignore all those demonstrably untrue statements (all 2,000 or so of them), the smarmy dog whistles, and those appalling red meat cliches flung at his audiences in speeches, television appearances and call-ins to his favourite television news channel – whenever he decides to insult foreigners, refugees, protesting football players, and all the other pet hates he likes to haul out as often as possible.

This time around, let’s just focus on his current foreign policy crises, both the ones that have come at him and those he has largely created all by himself. Once we do this, we quickly see how his central boast of being a great dealmaker evaporates into the smoke wafting in front of the mirrors in the fun house that is the Trump White House. Or, as foreign affairs analyst, writer and broadcaster Fareed Zakaria put it, Trump is, despite all the self-labelling, “a really bad negotiator”.

He has routinely touted his business acumen as the foundation of his dealmaking skill. But examine that record more carefully and much of it simply melts away. Over the years, Trump had been good at convincing credulous banks to lend him yet more money, lest their original investments with him go south. And he has always been prepared to sue or countersue anyone and everyone who charged him with failures to pay them for services rendered in his projects or for fraudulent representations such as Trump University.

Then there has been his favourite ploy to dramatically embarrass claimants to a financial future on his television show with that insouciant “you’re fired”, as yokels and rubes watched and the sponsors’ money kept rolling in. Over the years, too, he has similarly been convincing to would-be property developers (especially those with shady money that needed to be scrubbed a bit) that brandishing the Trump name over a project’s doors would be an instant road to prosperity, riches – and legitimacy. A huge giant three card monty of an investment empire has been constructed as the result.

But real foreign policy, or at least an effective one, rather than the adventures of a property con man, is built on long-term relationships of trust and an understanding of common interests with friendly and allied nations, and steadfastness and consistency in dealing with cogently with adversaries. And crucial in all of this is the need to become a trustworthy (or steadfast) partner in co-operation and in negotiations – especially the tough ones.

Right out of the box, Trump dumped US participation in the Paris climate accord (snubbing the rest of the globe), and the TransPacific Partnership (thereby handing the whip hand to China in its drive to build a broad, multi-nation set of economic and financial institutions and ties in the form of its Belt and Road initiative). For an added kick, he berated Canada and Mexico – partners with the US in Nafta – for playing the US as a sucker in that terrible deal, and then harassed the South Koreans over the recently agreed-to bilateral trade deal. Then his administration announced tariffs on steel and aluminium imports (largely from allied nations like Canada, even though the ostensible target was presumed to be China).

Then he suddenly threatened to impose new tariffs on Chinese products due to their manufacture in a country with a particular version of often-predatory state capitalism (not an untrue problem to be sure), and then he launched diatribes against automobile imports into the US – again swiping at allies like Japan and Germany, even though those two nations’ auto manufacturers build great fleets in the US and even export some of those cars onward, elsewhere.

When the Chinese leadership threatened retaliatory tariffs – especially on US grain and soy bean exports that would be a great smack at largely Republican-leaning farmers in key Midwestern states – his quarrelling and squabbling economic team suddenly switched their play to assert that the threatened trade war could be put on hold for a bit.

But, confounding everyone, the president then decided, at the direct request of Chinese President Xi, to ratchet back pressure on the electronics giant ZTE by allowing key components to be purchased from the US, despite the company’s known record of selling its products to nations currently under certain US trade sanctions such as Iran and North Korea – in order to save Chinese jobs. Cue the head banging and head shaking over this decision pretty much everywhere in the trade and economic policy community, not to mention among Trump’s own political allies.

All of this is the increasingly weird background to a number of foreign policy choices such as the withdrawal from the multinational agreement over Iran’s nuclear ambitions, even though that nation appears to be largely in compliance with the inspections and non-production of fissile material. The presumptive reason has been because the current agreement does not include things like Iran’s military adventures in Syria and Yemen, and its aims to develop longer range missiles – even though these items were not part of the deal in the first place. The European partners are now desperately trying to keep some semblance of an agreement in force.

Then there is North Korea. We have gone from those threats of nuclear annihilation, to an almost manic desire to meet North Korean Leader, Kim Jong-un, then on to a great flurry of summit preparations, accompanied by some “wink wink nudge nudge” self promotion for the Nobel Peace Prize, and then to the grand announcement that the denuclearisation of the Korean Peninsula was close to a done deal. But then, after a flurry of some new insults and promises to treat North Korea like Libya from the mouth of the new national security adviser, John Bolton, the North Koreans called Bolton some bad words in return. At that point, Trump issued a letter to the world – without first telling in advance US allies such as South Koreans (or the North) that the summit was off. A few days later, we were back at it again to say it was possible after all as – finally – some adult, experienced diplomats such as US Ambassador Sung Kim were called in to try to bring it all back on course and get it sorted out, if possible.

Taking a broader look at all this vast roiling chaos, Fareed Zakaria was moved to write the other day:

“It is nearly 500 days into the Trump administration. Where are the deals? Where is the renegotiated North American Free Trade Agreement, the bilateral trade agreements that were going to replace the Trans-Pacific Partnership, the new and improved Iran nuclear pact, the China trade deal? Trump’s record in working with Congress is even less impressive. He has not been able to strike an accord with Democrats on anything, from immigration to infrastructure.

“The world is laughing at us, he would often say. Well, what must the world be thinking now, as it watches the Trump administration careen wildly on everything from North Korea to China?”

And Jackson Diehl, an editor at The Washington Post, added:

“When May began, President Trump was presiding over diplomatic negotiations that could have delivered twin triumphs for his administration. Now, on Memorial Day, he’s reaping the wreckage of talks about Iran, and the North Korea process is in limbo. He has badly strained relations with vital U.S. allies and raised the risk of military conflicts in the Middle East and Asia. He has gone from would-be Nobel Prize winner to commander in chief of chaos.

“National security adviser John Bolton and Secretary of State Mike Pompeo, the new axis of the president’s national security team, deserve some credit for this mess: Both prefer open confrontation with U.S. adversaries to the more nuanced approaches sold to Trump by their predecessors. But in essence the past month has been a decisive demonstration of Trump’s unwillingness — or, more likely, inability — to grapple with the complexities of international affairs. It’s a deficit that already is being skilfully exploited by U.S. adversaries, such as China — and it could lead to catastrophe before we get through another 2 1 / 2 years…”

The other day, a Washington friend, long schooled in international economic relations, noted for me that he had, in turn, bumped into another Washington friend who had worked in China for the State Department, then worked on China with the US Trade Representative’s office, and who is now a lobbyist for a biotech firm – mostly doing China work (this trajectory is a frequent progression). Asked about the Trump administration’s China policy – tariffs, ZTE, Korea, etc – the China fundi said he was “completely stumped”, adding that he literally had no idea what the administration is trying to achieve. He and everybody else.

And if someone as knowledgeable as that individual confesses bafflement, you can only imagine what is being said in the corridors of power in Beijing, Seoul, Tokyo, Pyongyang, Paris, London, Berlin, or Brussels, and anywhere else where the mysteries of the Trumpian mind must be understood, evaluated, and responded to in some reasonable way. The world is not just a bunch of sleazy bankers hoping to squeeze a few more points on a questionable loan for yet one more glitzy hotel/casino/yacht basin. Maybe Trump and his vexatious bunch of scheming advisers will learn this before it all goes to pieces. Or not. DM