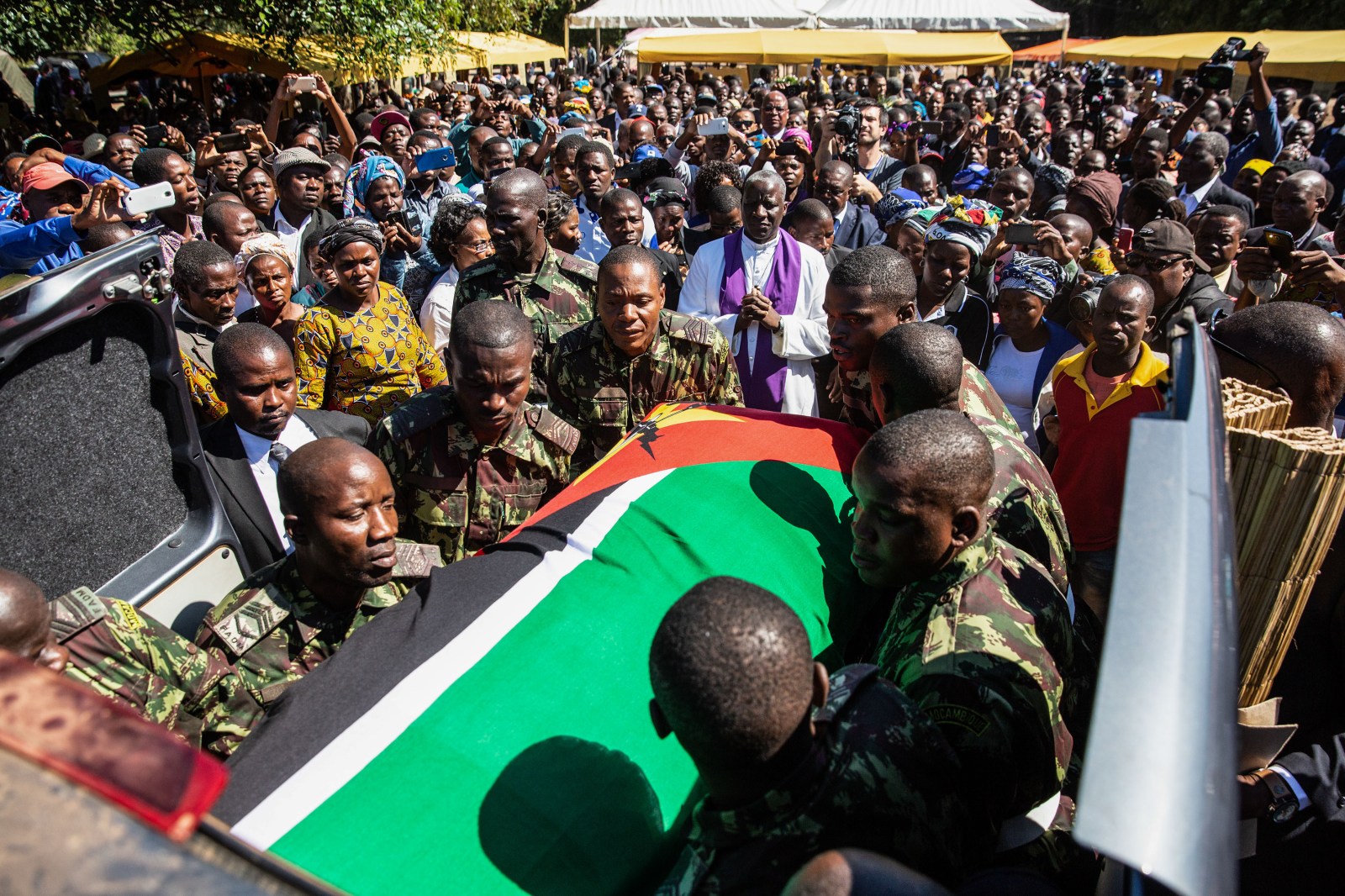 Members of the Mozambican Defense and Security Forces escort the casket with the remains of the president of the Mozambican National Resistance (RENAMO), Afonso Dhlakama, during the funeral ceremonies in his home village, in Mangunde, Mozambique, 10 May 2018. EPA-EFE/RICARDO FRANCO

The sudden death on 3 May of Afonso Dhlakama, leader of the Mozambican National Resistance (Renamo) party, has created both risks and opportunities for his party and the country. The 65-year-old Dhlakama saw himself as a champion of Mozambique’s democracy, but was a hands-on dictator within Renamo.

Like many other African leaders, he sidelined likely rivals and thereby failed to put any succession plan in place. He left many other loose ends in Renamo’s immediate political future. So no one seems to have much idea of who might succeed him.

Some observers were surprised that Renamo’s national council appointed the party’s defence chief Ossufo Momade, rather than secretary-general Manuel Bissopo, as interim leader. This is pending a decision, possibly by a full party congress, on a permanent new leader. Those two, and Dhlakama’s niece Ivone Soares – head of Renamo’s parliamentary caucus, look like the three main candidates for the top job.

The election could decide which direction Renamo takes in the future – towards greater parliamentary politics or towards more election boycotts and warfare. Dhlakama, sometimes apparently under pressure from his generals, wavered between the two. He twice recently ‘returned to the bush’, in 2013 and again in 2015, to resume low-level civil war. This was because Renamo believed it was being cheated in parliamentary politics.

So the party remained ambivalent, with its mainly younger members of Parliament conducting business like a normal political party in the National Assembly, and its older soldiers, not yet demobilised, occasionally attacking vehicles on the main highway to the north. Dhlakama was in fact holed up in one of his hideaways in the Gorongosa mountains when he died, apparently of complications related to untreated diabetes.

Straight after being chosen as interim leader, Momade threatened to end the temporary ceasefire with the government and return to warfare. This was if President Filipe Nyusi didn’t immediately implement the recent agreement between Nyusi and Dhlakama on decentralisation of power and the integration of Renamo fighters into the regular army.

The agreement would transfer the governorships of the provinces – now all appointed by the Frelimo central government – to whichever party commanded the majority of support in each province. That could have given Renamo three or more governorships.

The trouble is that Dhlakama and Nyusi were conducting the negotiations personally, so it’s unclear whether they had finalised the agreement. Nyusi seems committed to it, but there are suggestions of some hesitation elsewhere in the Mozambique Liberation Front (Frelimo) – the ruling party. These hardliners might use also Dhlakama’s death as a pretext for backing out of the deal. The Southern African Development Community and Mozambique’s international partners should use their influence now to ensure the agreement sticks.

Soares, if she became leader, would presumably take Renamo down the road of greater participation in Parliament rather than extra-parliamentary politics. She had already been credited with nudging her uncle, Dhlakama, down this road recently, including his unilateral December 2016 ceasefire which led to the Dhlakama-Nyusi negotiations.

Another major decision his death left hanging was who would represent Renamo in the general municipal elections in October. Before Dhlakama’s death, Renamo was poised to make significant gains in those elections, as prefigured in the recent mayoral election in Nampula city, which Renamo won. That revealed Frelimo’s current political weakness, aggravated by the huge scandal that blew up in 2016 around some US$2 billion of debt the government incurred in murky shipping deals.

Now Renamo’s political prospects look uncertain. Dhlakama always hand-picked Renamo’s mayoral candidates. A bitter succession battle, as some predict, could propel the party into the October elections divided and much weakened. Though perhaps, with a lot of luck, more democratic. He always complained bitterly about the lack of real democracy in elections against Frelimo, but Dhlakama was no great democrat within his own party.

According to Mozambique-watcher Joseph Hanlon, Renamo’s boycott of the 2013 municipal elections was in part motivated by Dhlakama’s determination to prevent the election of Renamo mayors who could then build independent power bases. Similarly, at provincial level, the decentralisation deal he was striking with Nyusi would apparently not have included a provision for governors to be directly elected by voters in each province. Instead, the national leadership would have chosen the governors. In other words, Dhlakama himself.

Apparently it also suited Nyusi for the Frelimo national leadership, in other words himself, to appoint the governors in Frelimo-majority provinces. This would prevent him being exposed to the vagaries of local electorates and the possible threats of strong governors with independent power bases among the local people.

With all the uncertainty now hanging over it, and big and potentially divisive decisions pending, some predict Renamo could disintegrate and perhaps disappear from the Mozambique political scene, at least as a force to be reckoned with.

Veteran Mozambican journalist and political commentator Paul Fauvet has suggested that the third largest political party, the Democratic Movement of Mozambique (MDM), founded by Renamo breakaway Daviz Simango, could therefore be the biggest beneficiary from Dhlakama’s death. But others believe Renamo still has enough political support to maintain its position as Mozambique’s main opposition party and perhaps to grow.

As always, change – and especially sudden change – offer both risk and opportunity. André Thomashausen, a legal adviser to Renamo during the negotiations that led to the end of the 1980s civil war and multi-party democracy in 1994, fears that Renamo’s election of Momade may mean the party’s military faction has taken control.

Alex Vines, head of the Africa programme at Chatham House, is more optimistic. He believes Momade is committed to the Dhlakama-Nyusi peace deal, and that if both Frelimo and Renamo seize the opportunity, Dhlakama’s death could present the opportunity ‘to finally draw a line under Mozambique’s long war’. DM