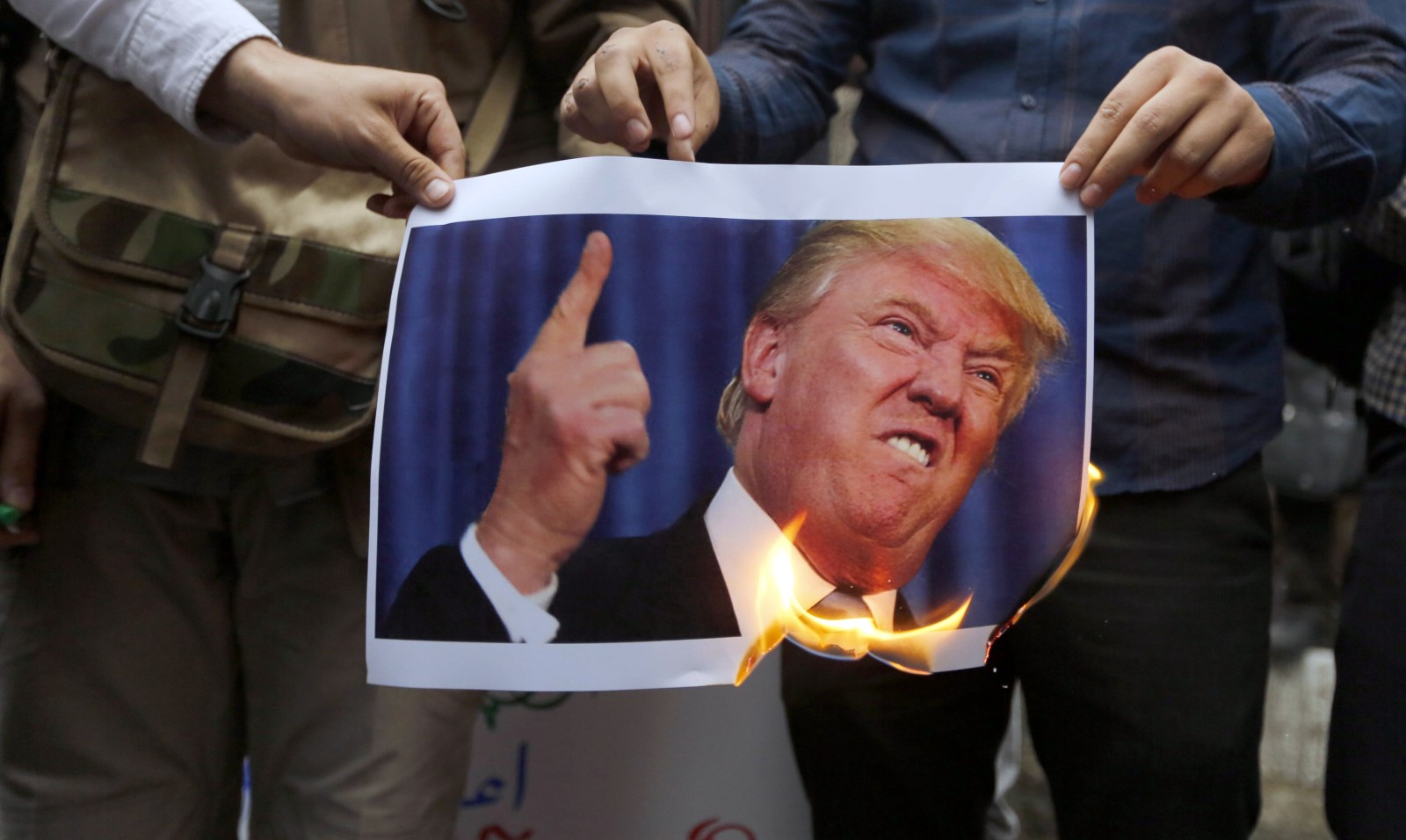 Iranians burn a picture of US president Donald Trump during an anti-US protest in front of the former US embassy in Tehran, Iran, 09 May 2018. Photo: EPA-EFE/STR

We knew it was coming. He promised. We knew it would be bad. It is. Donald Trump’s newest pronouncement on Iran has essentially undone years of diplomatic effort in effectively bringing the Iranian nuclear project to a halt, and, instead, ushering in an entirely new version of Middle East uncertainty. Thanks, Don.

Since 1947, the prestigious journal, the Bulletin of Atomic Scientists, has had its famous doomsday clock on the cover of this publication – and now on its website as well. The clock shows, in the view of the journal’s editors, how close to (potentially nuclear) war the globe is at any given point in time. When it was first developed, they set the minute hand at seven minutes to midnight. By contrast, in 1991, as the Cold War was receding into history, they moved it back to 17 minutes before the hour.

As of only a few days ago, it was standing at just two minutes before midnight because of the presumed threat of war between North Korea and the US. But, given the extraordinary developments in that relationship, it might well have been argued that, whew, the minute hand could now be moved back smartly from the red zone. But then there has been Donald Trump’s Tuesday announcement on the multinational nuclear agreement with Iran. Depending on how badly this one turns out, we might even be waking up to see the BAS clock where Mickey’s big and little hands both are just about to meet at midnight.

Big ouch, this. A usually sanguine friend living in Washington has already begun watching Armageddon-esque movies like On the Beach, based on the Nevil Shute novel, just to get mentally prepared for what may be coming. That may be more than a little alarmist, but it is also true that Trump’s announcement has profoundly upset the global apple cart, with still largely unpredictable outcomes in all directions.

To review, briefly, how we got here, for well over a decade there had been growing evidence that Iran had been assembling a stockpile of enriched fissile materials pursuant to the creation of a nuclear device. A wide array of the hi-tech centrifuges needed to concentrate the nuclear fuel (a significant number of which were apparently incapacitated via a cyber hacking – the Stux-Net attack – that no nation has publicly claimed credit for) had been spinning away merrily in various secret spots.

Simultaneously, the Iranian government was pursuing the construction and testing of increasingly long-range ballistic missiles that might well be married to a nuclear weapon, once that bit of technology was perfected. Meanwhile, as a result of all this, a growing range of international financial and trade sanctions were being imposed upon any foreign dealings with Iran, severely limiting Iran’s efforts to grow its economy. That was becoming a growing concern on the part of many Iranians as they pressured the government for liberalising policy changes going forward to get some traction on the economic growth treadmill.

In the face of all these actual – as well as potential – developments, i.e. a nuclear-armed Iran with missiles bent on regional hegemony, American, UK, French, German, Russian and Chinese governments, acting together with the EU, cautiously but vigorously engaged with the Iranian government to negotiate a longer-term halt to any Iranian nuclear progress. Eventually, after years of discussions and negotiations, a deal was struck in 2016 that halted elements of the nuclear programme, provided some serious inspection and verification capacity, and put restart limitations on various parts of it on long hiatuses. This was presumably done with the idea that a democratic evolution in Iran would move the country away from desiring such weapons in the first place.

The Obama administration saw the accord as a signal achievement of its tenure in office, although Republican hardliners such as the newly appointed national security adviser, John Bolton, as well as real estate developer/television personality and populist rabble-rouser Donald Trump took up full-on opposition towards the new agreement. One of the standards of his presidential campaign was to call it the worst agreement ever negotiated (although sometimes he was equally unhappy with Nafta and the Paris climate accord, just to be fair) by US officials. Trump promised to tear up the accord as soon as he had his hands on the levers and steering wheels of power.

While it is true that Trump’s anger towards this accord draws from many sources, real and imaginary, it seems that there are three legs to this particular tripod. The first is that the accord was strongly supported by his predecessor in the White House and that any successful Obama legacy was an anathema to the new president. If Obama supported the accord there must be something seriously wrong with it.

The second leg of the tripod was support for his view from seriously conservative, right-wing actors such as John Bolton for an assault on the accord, in part because of Iran’s engagement in Syria and Yemen and its visible effort to become a regional hegemon. And the accord didn’t address these issues. Such a position has been supported by Trump’s electoral base – and for Trump, absolutely everything revolves around shoring up the base, come what may.

US participation in the accord has required periodic waivers by the president of any re-imposition of a variety of financial sanctions, and while Trump opposed the agreement, he did not specifically oppose a waiver initially, first time around. But as the next deadline loomed on 12 May, Trump gave clear indications that this time around he would not issue the waiver, and he would oppose the accord’s continuation in its present form, effectively abrogating US participation in it.

And so, in the end, the Trump administration took the easy path of announcing it would no longer uphold the accord and that it would move towards re-imposing financial sanctions, with the added fillip that third country companies with business interests in the US or engagement with the US financial system would be specially looked at, with some seriously gimlet eyes.

Before the announcement, a series of foreign leaders – France’s Emmanuelle Macron, Germany’s Angela Merkel and UK foreign secretary Boris Johnson – had all more or less publicly begged Trump not to take that step, and public opinion polls in America showed a majority of Americans still supported the agreement, although not among his all-important electoral base.

As for the Iranians, so far at least they have not yet said they consider the accord dead, even though the US has taken itself out of the equation. But their participation has, in the opinion of many Iranians, failed to deliver the promised economic benefits from the rollback of financial and economic sanctions. The wave of investment and trade has yet to materialise, the local currency has hit a wall, and the urban population and middle class especially have seen little benefit in living standards, even as vast resources are used in the country’s international adventures.

Iranian leaders have indicated they may see the agreement as being as good as dead if economic problems worsen – and then those centrifuges may turn again. Meanwhile, third country businesses may be finding themselves in trouble if they have substantial assets in the US or use US banking and financial networks and try to carry out new activities in Iran.

Where all this leaves the accord is anybody’s guess, but it is a fair bet that the Trump administration figures that dealing this way with Iran is a not so subtle signal to North Korea (or vice versa?) to get with the programme. The problem now is that Trump administration officials have been unable to articulate a realistic plan B, now that the accord has taken a serious shot. Moreover, this decision has driven a wedge between the US and its three principal allies in Europe – Germany, the UK and France – the likes of which has never been seen since the beginning of the postwar world.

Further, it has put American policy further at the behest of both the Saudis and the Israelis, even if a substantial number of Israel’s own security and military professionals don’t believe the view on the accord as argued by Benjamin Netanyahu. In addition, with the accord in the ICU, it is entirely possible that Iranian forces in Syria or its allies, Hezbollah, may end up in more hostile action with Israeli forces which will be determined to remove any threat from Iranian supplied missiles now that there is even the small possibility of a renewal of Iranian nuclear ambitions.

Finally, this decision, unilateral and presumably impulsive, will negatively impact on the ability of America to influence events in the region and beyond, and make it that much harder for other nations to take America at its word with further, future agreements. Taken together, this is a bad decision, made badly, with few if any good impacts. If it all goes south, the responsibility will be Donald Trump’s alone. DM