GTS is the moniker Porsche bestows on its more dynamically focused model derivatives. The 718 Cayman and 718 Boxster are the latest recipients of the badge.

In its latest, and potentially finest iteration, the Kyalami Grand Prix Circuit provides a thrilling combination of fast sweeps, plunging downhills, off-camber corners and a long, kinked straight. It’s a temple to the religion of performance, and to the art of fast driving.

A perfect venue then for a first experience of the latest additions to the Porsche offering in South Africa. 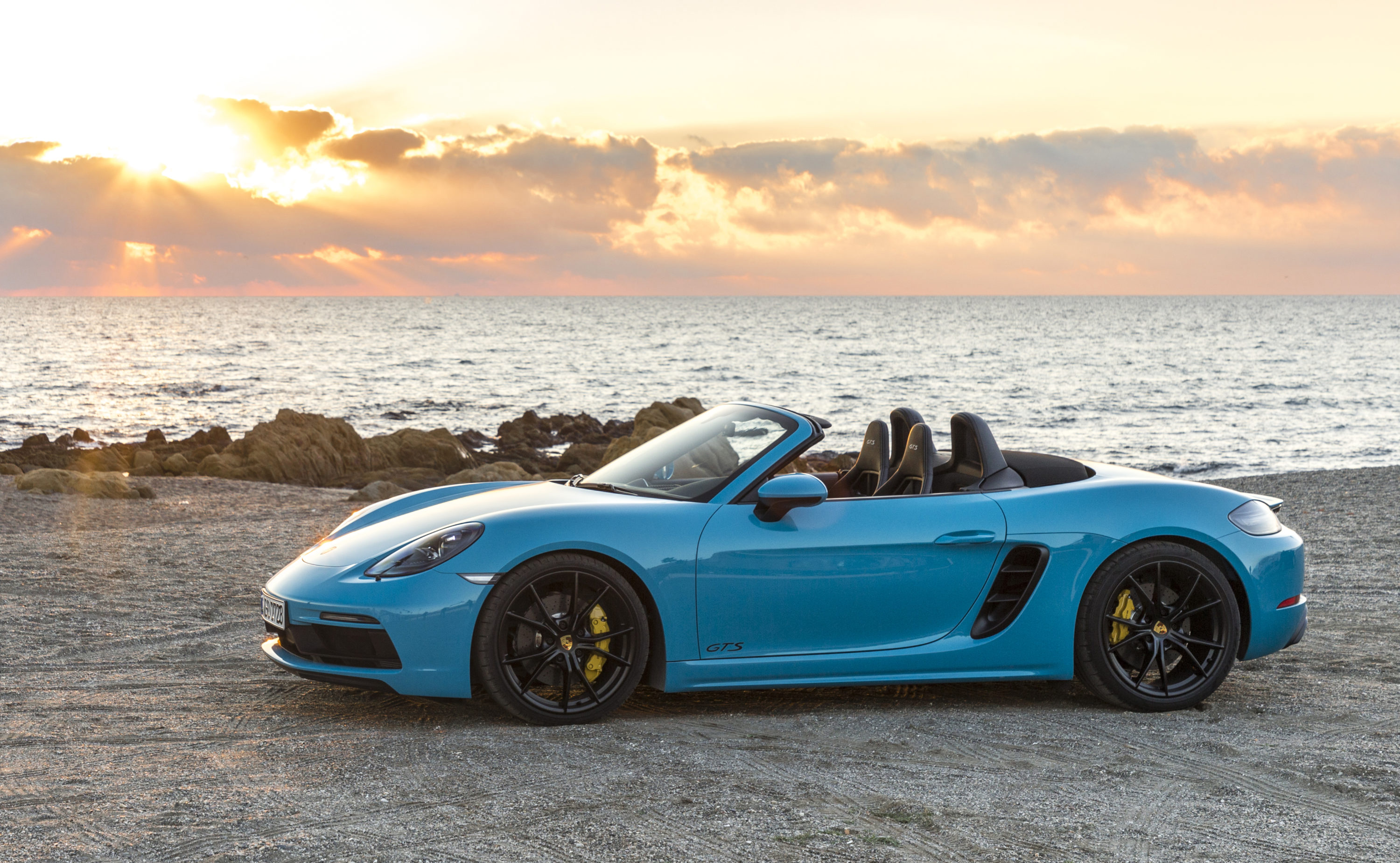 The 718 Cayman coupé and 718 Boxster roadster represent the first rung on the Porsche sports car ladder. Up to now, the duo have come in two flavours: vanilla Boxster/Cayman, and their keener, more muscular ‘S’ stablemates.

The arrival of the GTS badge heralds an even more dynamic interpretation of the mid-engined, rear-wheel drive sports car. Thus, the GTS models get more power, extra torque, a sportier chassis and a more resolute styling package. 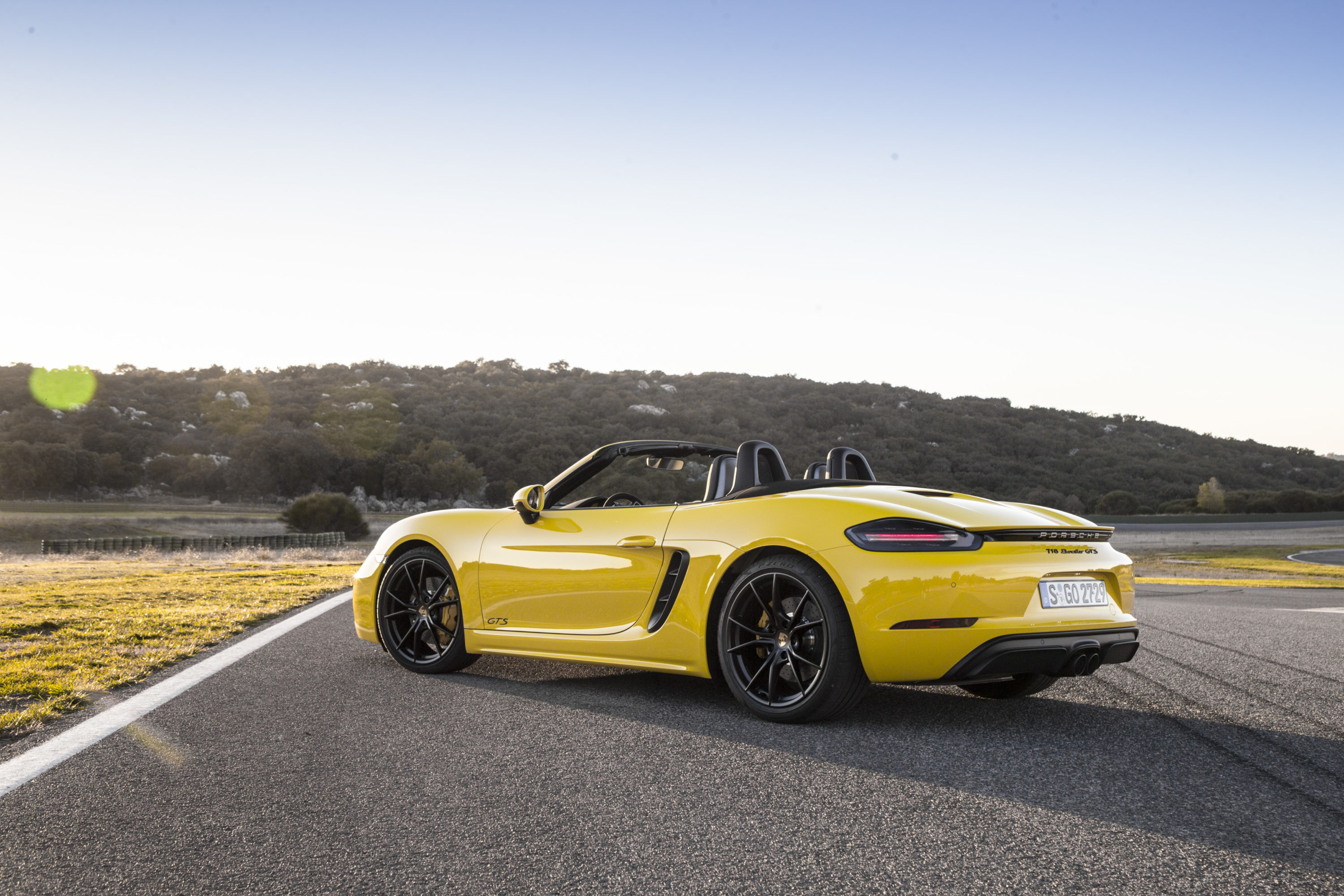 Not surprisingly, these are meant to be the most focussed members of the Porsche 718 clan, targeting those drivers who still purchase Porsches primarily for their dynamic prowess.

Parked on Kyalami’s long main straight, the 718 GTS looks aggressive and hungry for action. Both roadster and coupé gain the same exterior embellishments, with black the common theme. 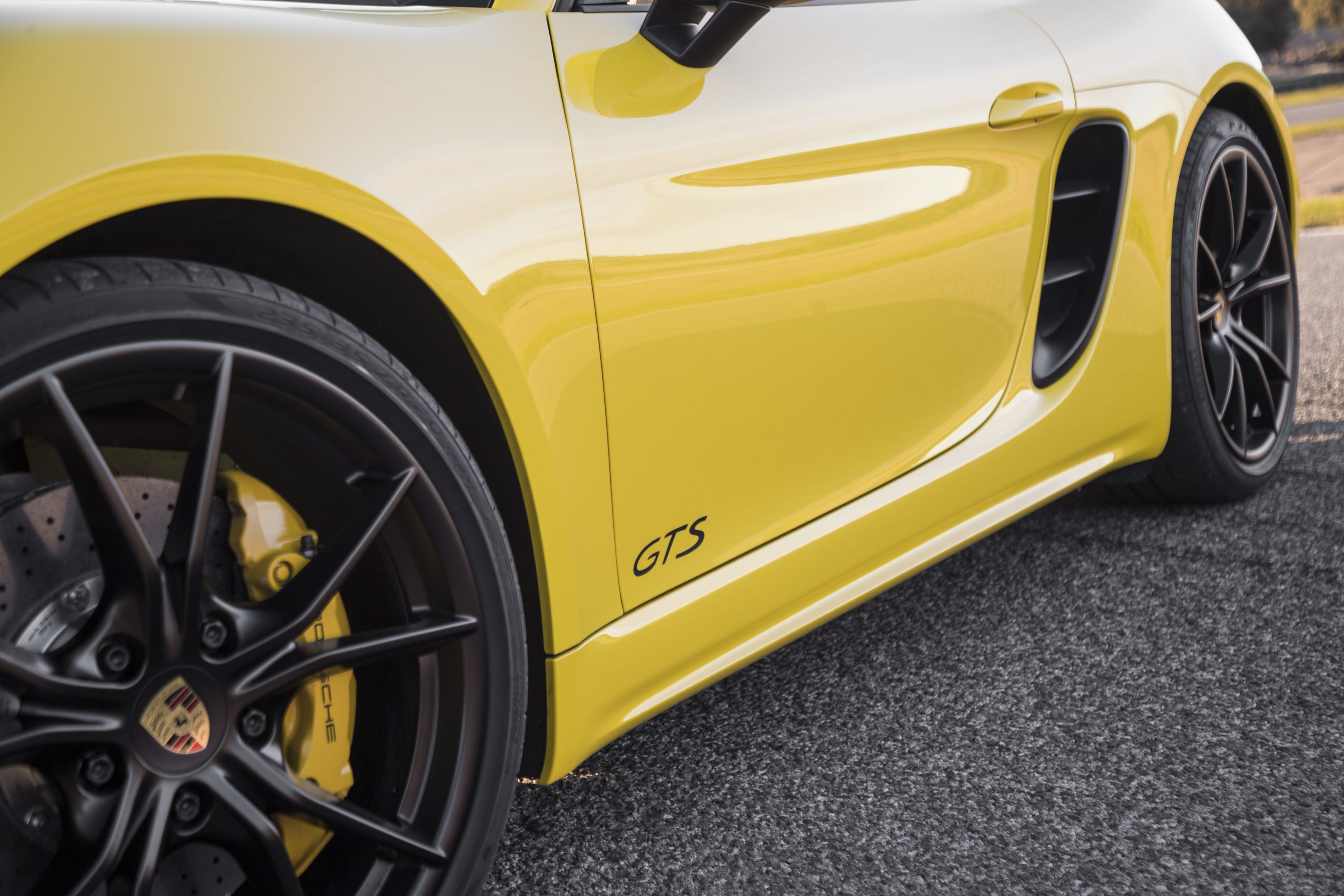 Most obvious are the 20-inch black alloy wheels, the black rear diffuser and the black-tipped dual exhausts. The GTS badges are in black too, while the bi-Xenon headlights gain dark-tinted modules, matched by dark-tinted lenses for the tail lights.

If you know your Porsches, you’ll also notice the more aggressive front apron with its more pronounced air intakes, and the 10 mm lower stance, which adds to the almost angry, hunkered-down appearance of these cars.

That’s specifically true of the Cayman, which these days is positioned slightly below the Boxster in pricing terms. The tin-top still looks the sharper of the two, while the Boxster’s fabric hood promises the allure of open-top driving, but softens the overall appearance. 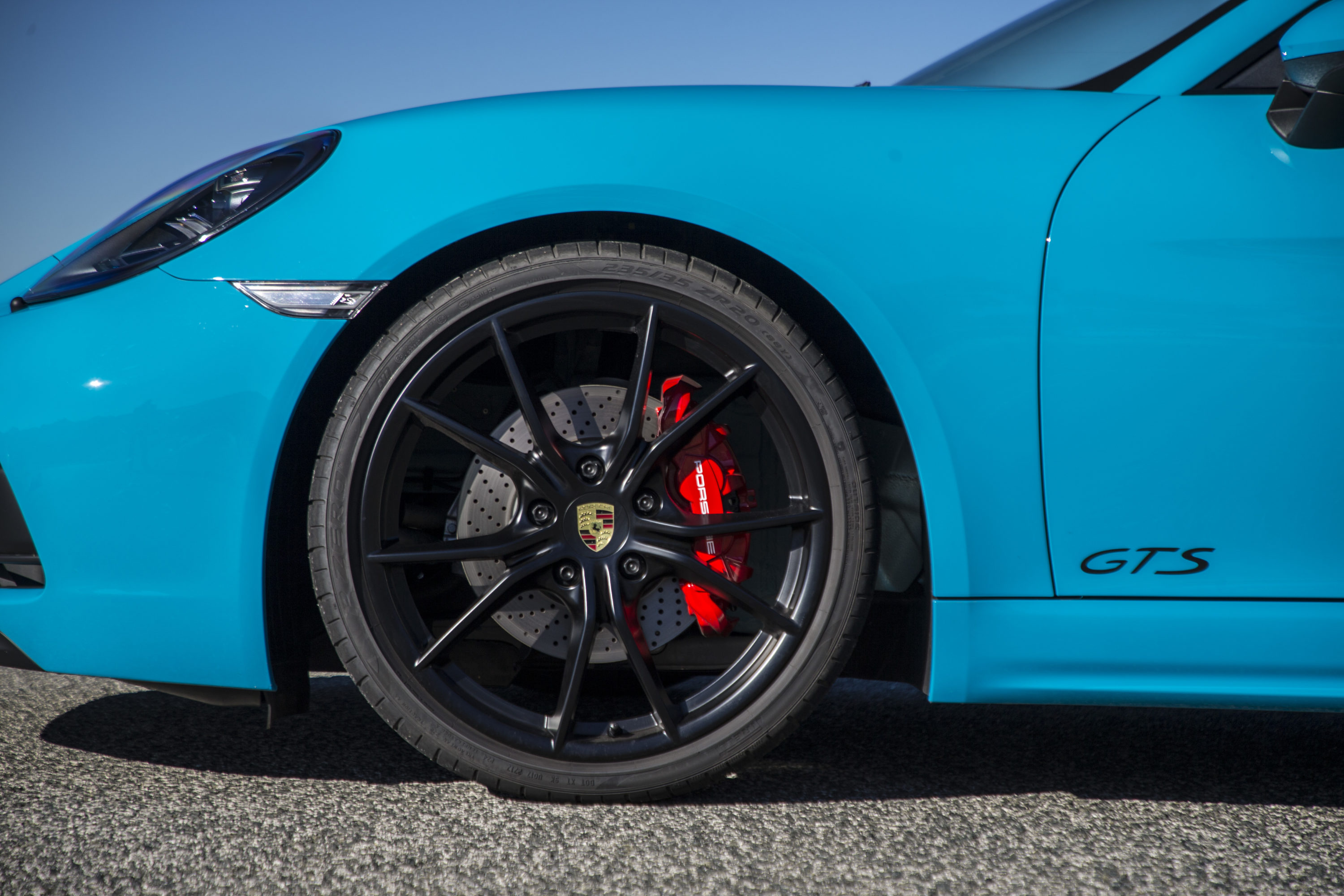 A twist of the ignition key (no fancy-pants start button here) and the 718’s flat-four turbo engine barks into life with an unmistakeable enthusiasm that bodes well for the driving experience.

But to be realistic, there’s a lot that counts in the four-cylinder’s favour. Now turbo-assisted, it offers an abundance of torque across a far broader rev band, and is much less exposed to the power-sapping vagaries of Johannesburg’s 1 600m altitude. It’s more efficient, too. 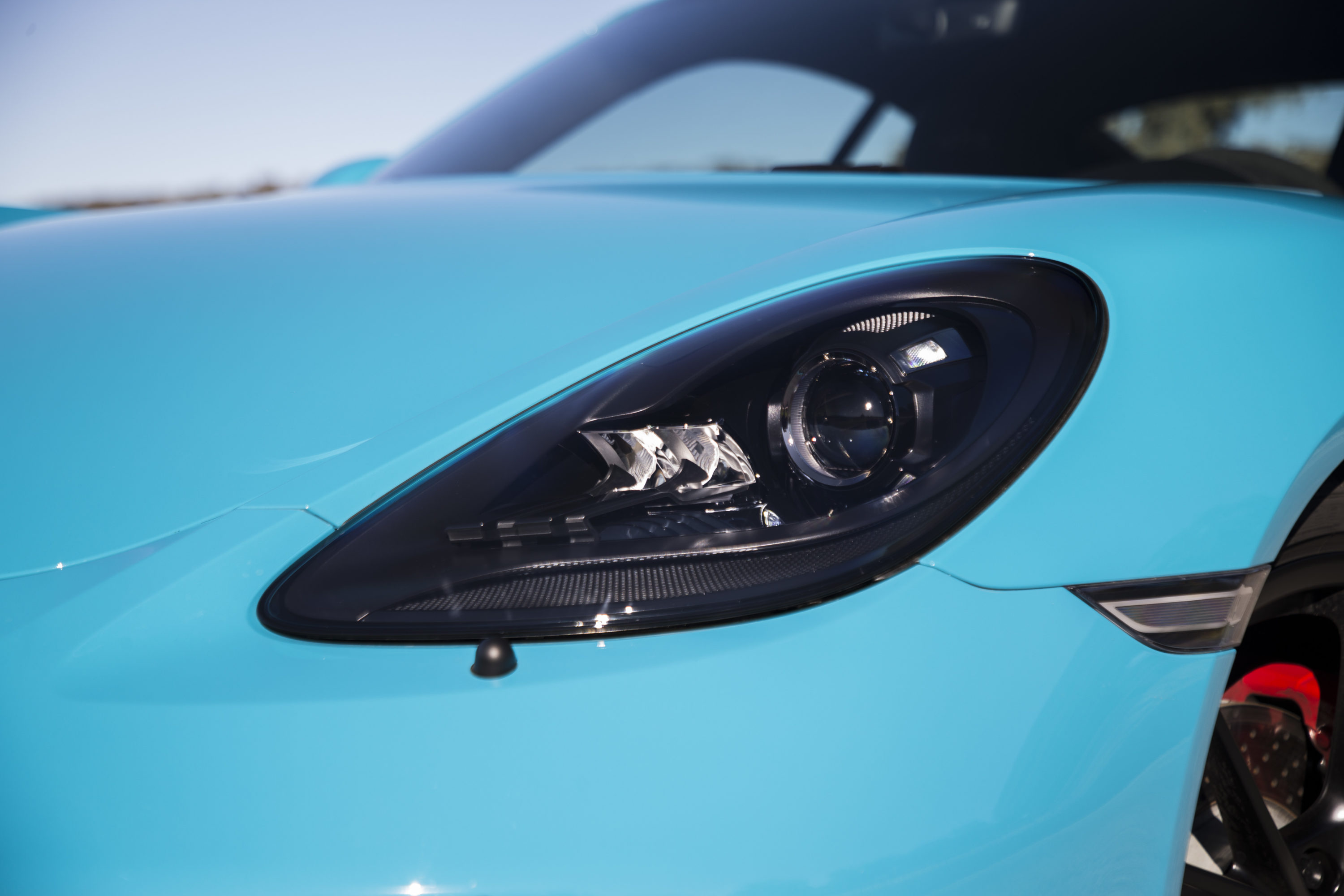 To put those stats into perspective: the GTS is 11kW stronger than the S version, and a full 26kW more powerful than the previous, flat six-based GTS.

The torque figures vary a little, depending on the gearbox choice. Porsche offers the 718 GTS models with either a six-speed manual or a seven-speed PDK dual-clutch transmission. The manual version has the same power output at its disposal, but has to make do with 10Nm less twist. 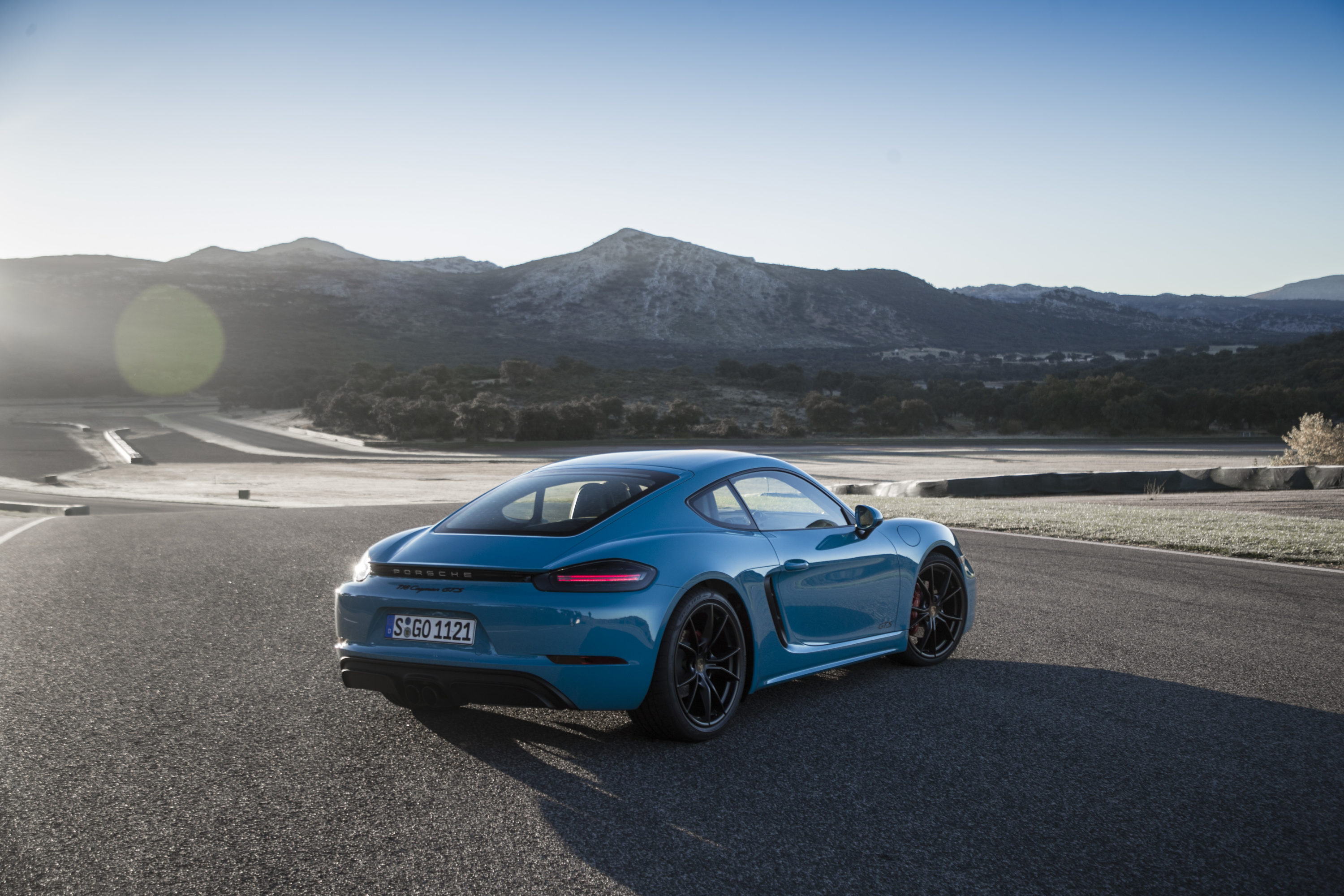 In South African terms, that’s of very little consequence: the overwhelming majority of Porsche sports cars are ordered with the PDK option. Manual and PDK versions are priced identically, too.

Heading out on the track, the first impressions are of a car that’s eager to be driven with intent. Acceleration is strong and sustained from the word go, with no noticeable turbo kick, while the considerable midrange punch allows instant and rewarding response to throttle input. 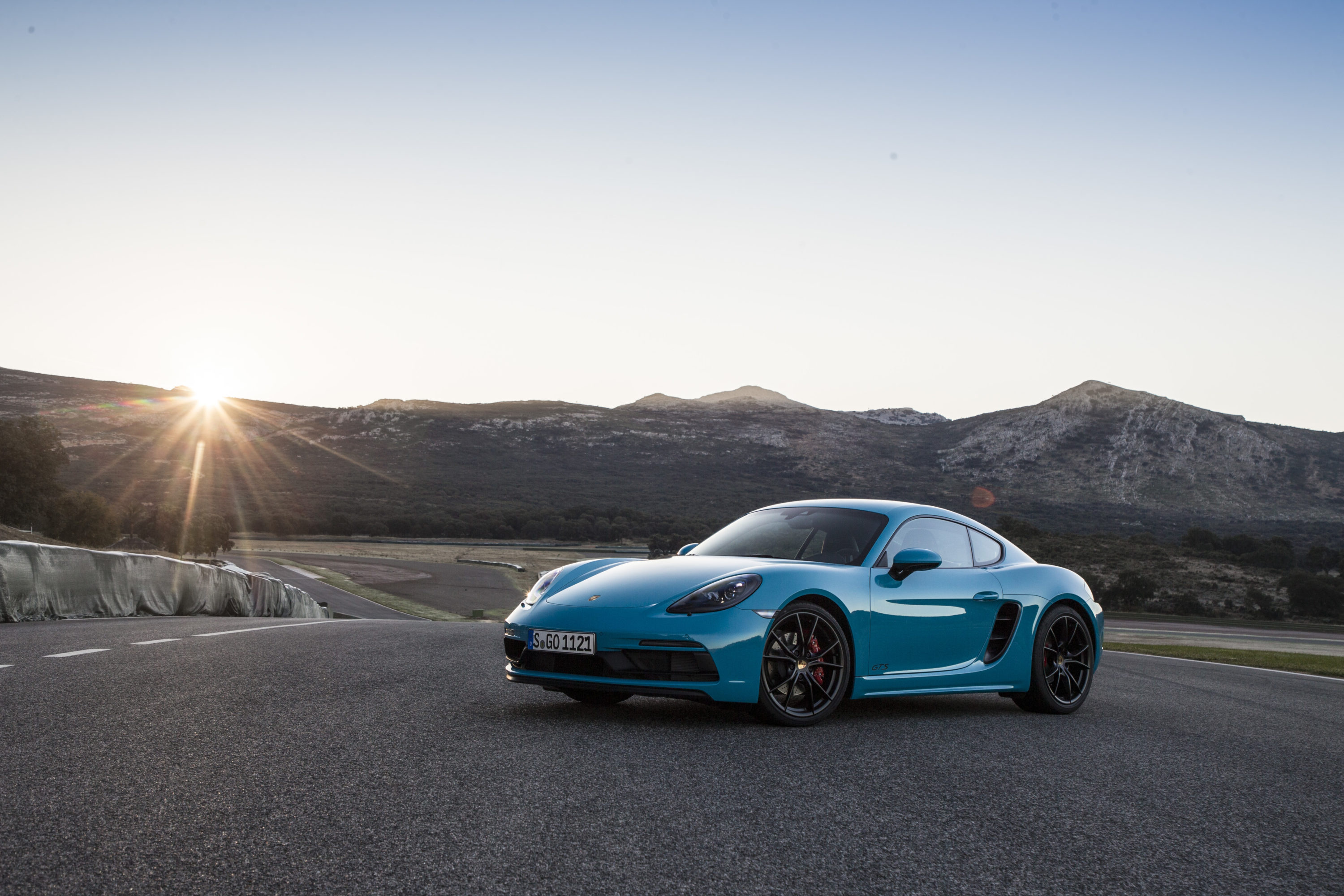 The GTS shares the finessed steering and communicative chassis of the entire 718 range, which allows for precise turn-in and a close rapport between car and driver. Apexes are effortlessly and tidily clipped, and the cornering attitude is flat, with almost no discernable body roll, even when pressing on.

No wonder it only takes half a lap or so to become confident behind the wheel: the GTS might speak an unequivocally sporty language, but it’s an easy one to understand. 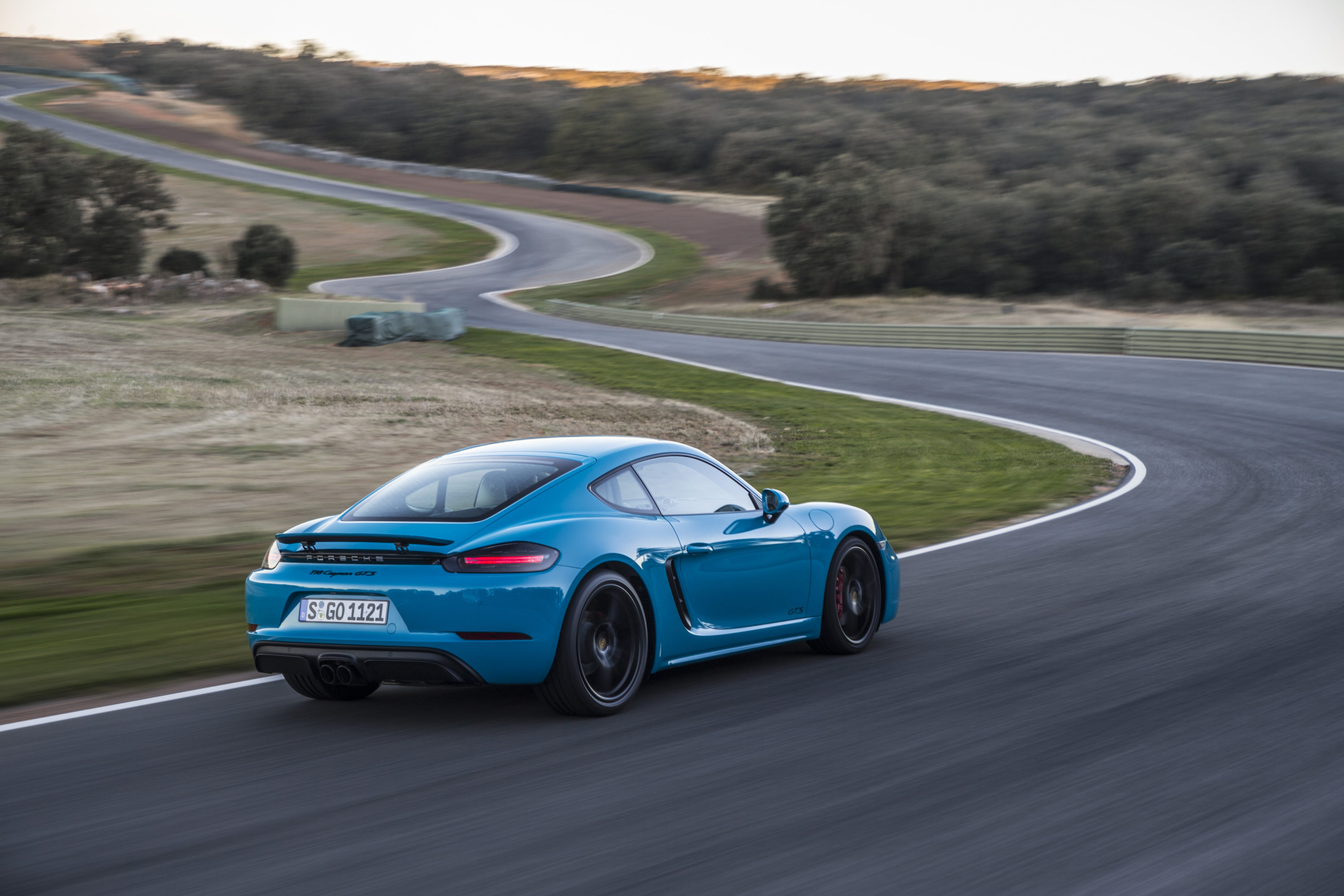 Push a little too hard into a corner, and the rear can hint at a little liveliness, but never alarmingly so, and on Kyalami’s perfect macadam, adhesion levels are far higher than most drivers would dare challenge.

A rotary control on the steering wheel allows on-the-move selection of driving modes, with Sport and Sport Plus modes the most relevant. Both amend parameters such as throttle response, suspension damping, stability control margins – and the all-important exhaust note.

Talking of which, the 718 GTS sounds growly and guttural, creating a new sonic signature that’s very different from the previous flat six, but still both characterful and aurally satisfying. It’s more convincing in Sport mode, albeit noisier, but that suits the more extrovert nature of the GTS to a tee. 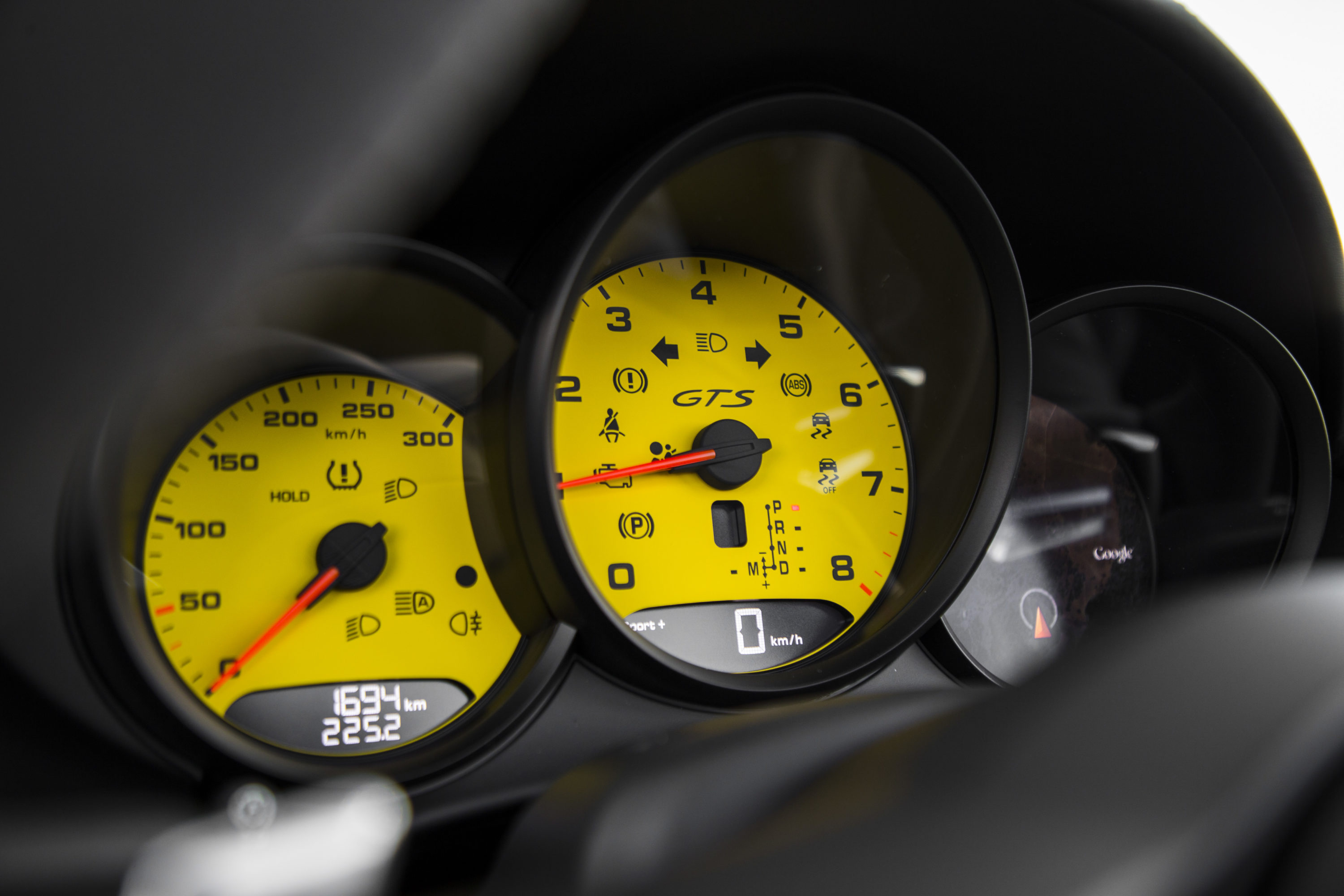 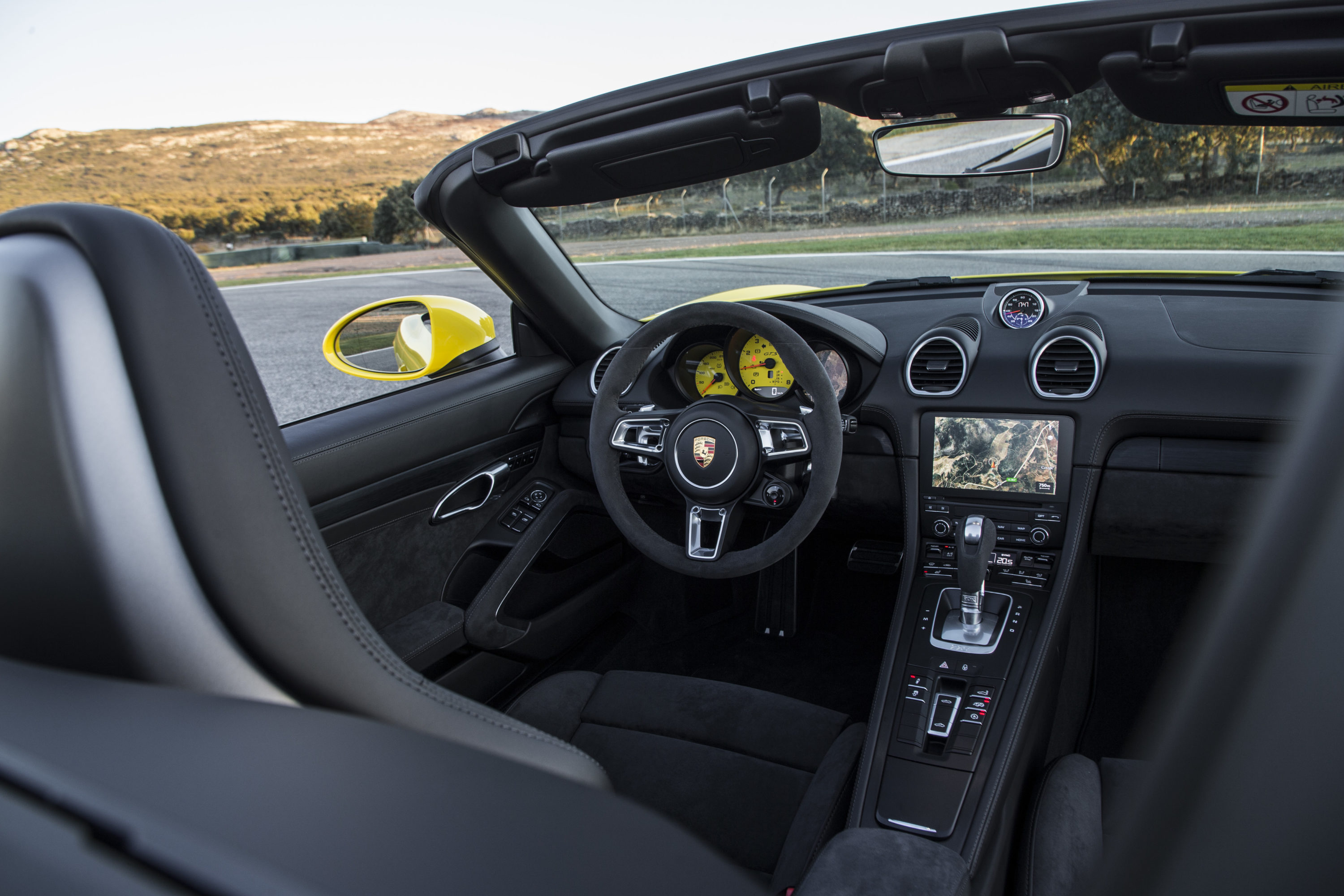 This is the kind of car you want to spend time with – the more you drive it, the more it gets under your skin. For a focussed sports car, the ride is surprisingly supple in the Normal driving mode setting, although Sport and Sport Plus add more attitude and more direct feedback without compromising comfort too much. 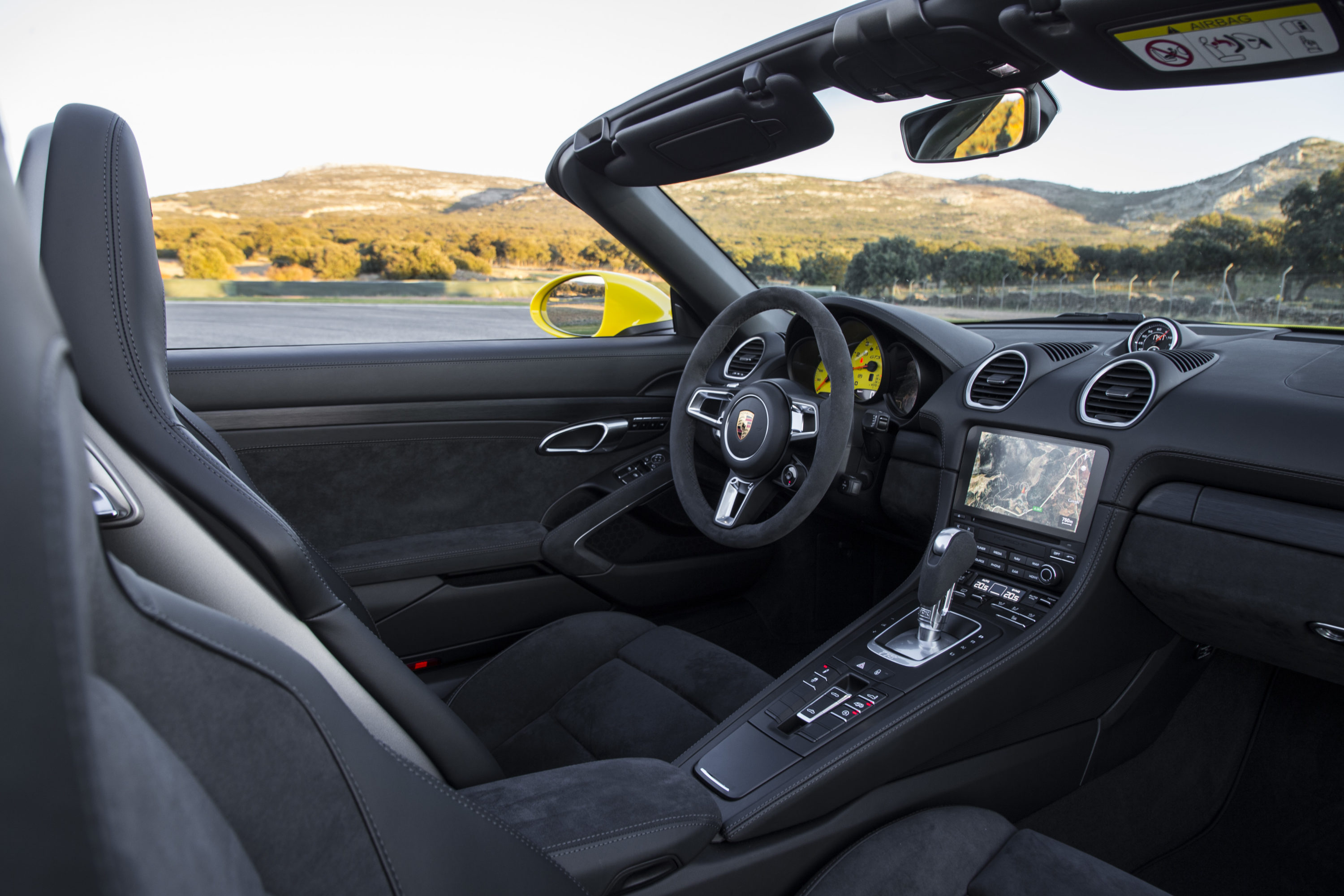 Is it quick? Very much so. The PDK-equipped Boxster and Cayman I drove are credited with identical acceleration times and top speed: 4.1sec for the 0-100km/h dash and 9.0sec from zero to 160km/h, with a top speed of 290km/h.

In reality, though, it’s the way the 718 GTS punches its way out of corners, its ability to effortlessly respond to even mild loud pedal inputs, and its talent for carving through corners with surgical precision, that deliver the greatest satisfaction. 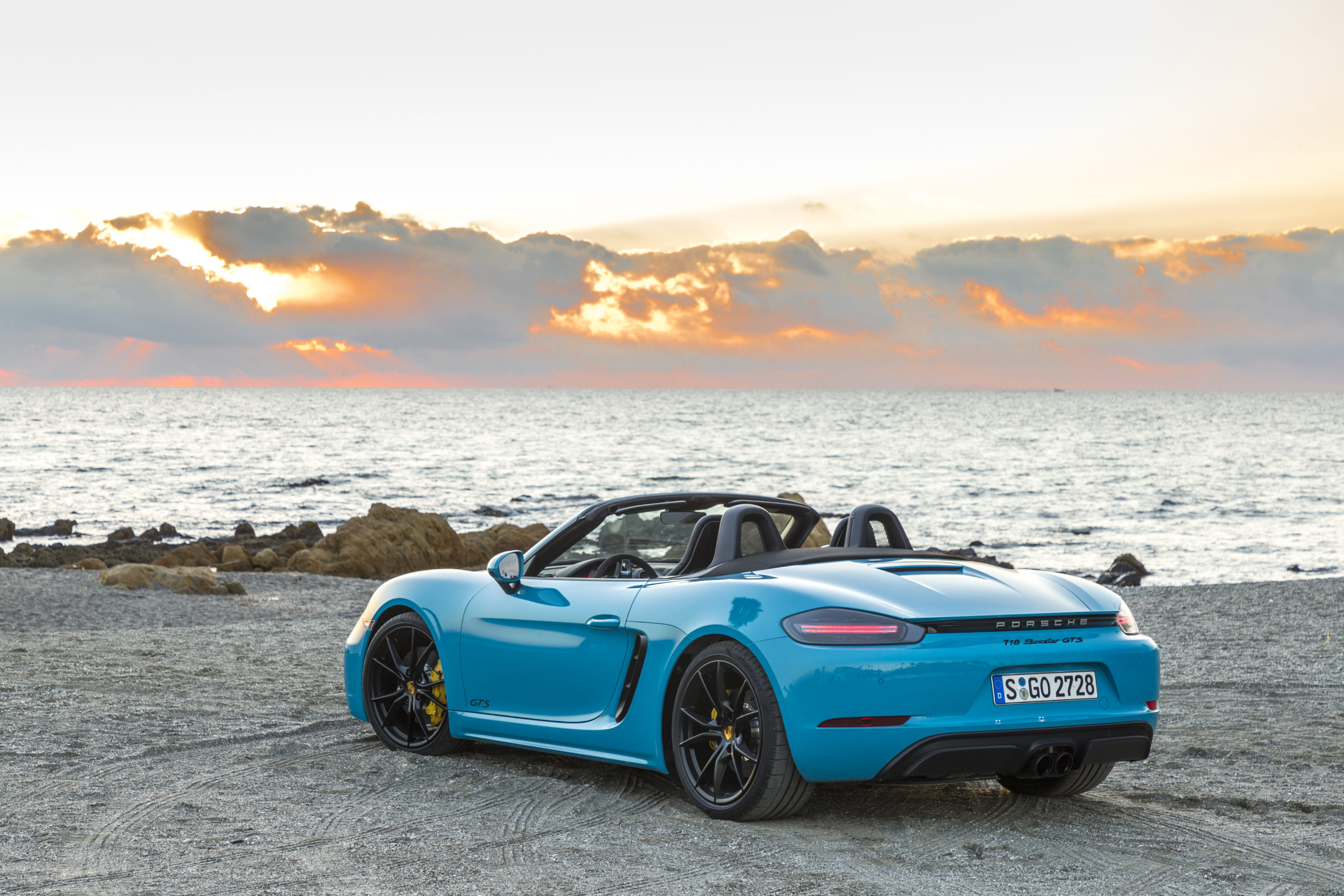 Interestingly, there’s very little to choose between the roadster and the coupé in dynamic terms. The soft top in no way compromises the Boxster as far as handling prowess or ride is concerned, and while wind noise may be marginally higher, it’s a small price to pay for the extra benefit of wind-in-the-hair motoring.

The cabin is comfortable in two-seater terms, with just the right mix of luxury, quality and sportiness to keep everyone happy. The high-backed bucket seats provide plenty of lateral support and ample adjustment scope, too. 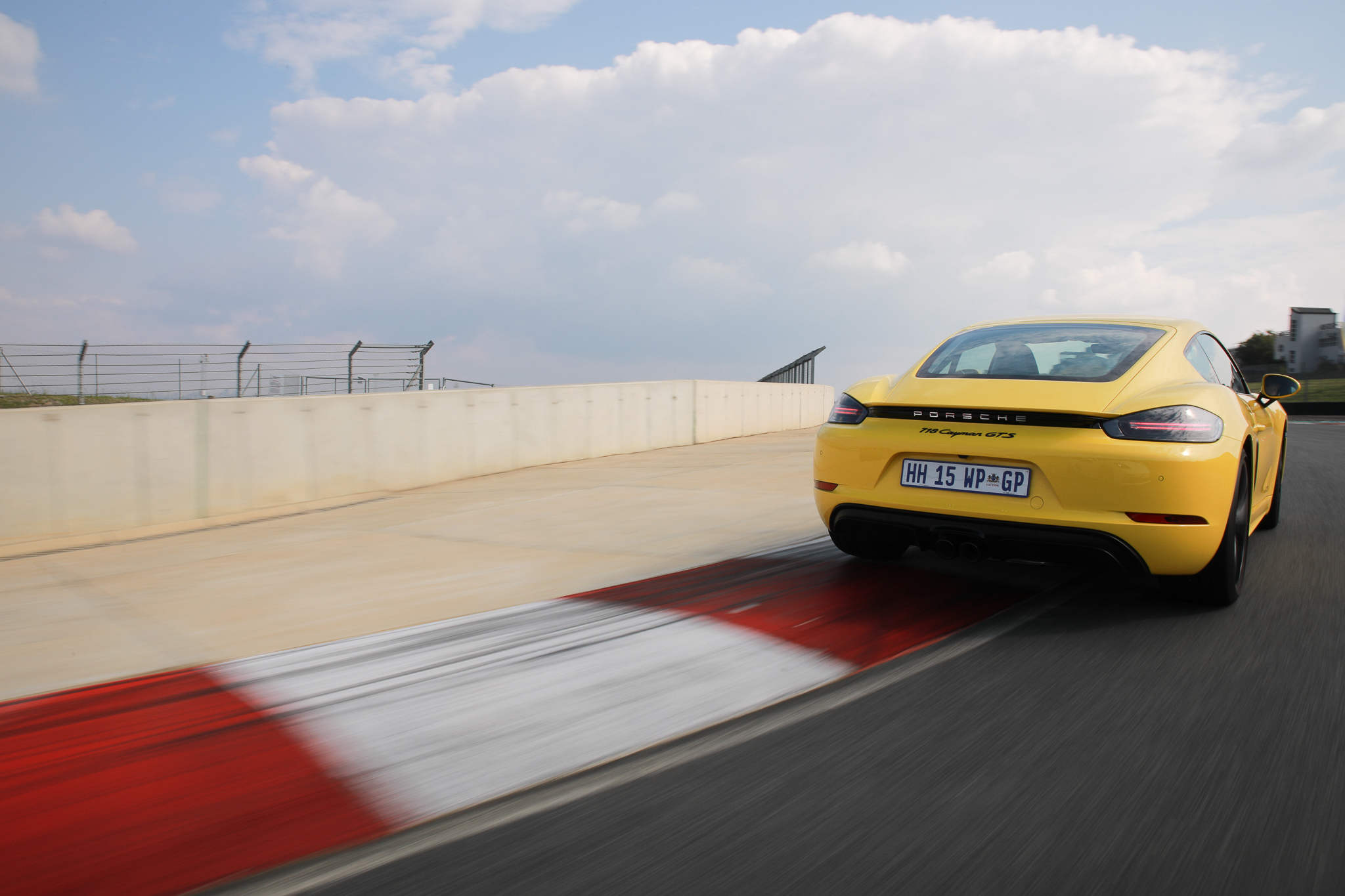 Two luggage compartments – one up front, one behind the engine at the rear – offer more than expected packing space, too, adding practicality to the 718’s list of virtues. Extensive safety features provide further reassurance, should things go pear-shaped.

In fact, there’s very little to complain about here. At this level, items like cruise control, app connectivity and Apple Car Play should not be added-cost extras. But in its segment, the overall package is well priced at R1,122,000 for the 718 Cayman GTS, and R15k more for the Boxster version. 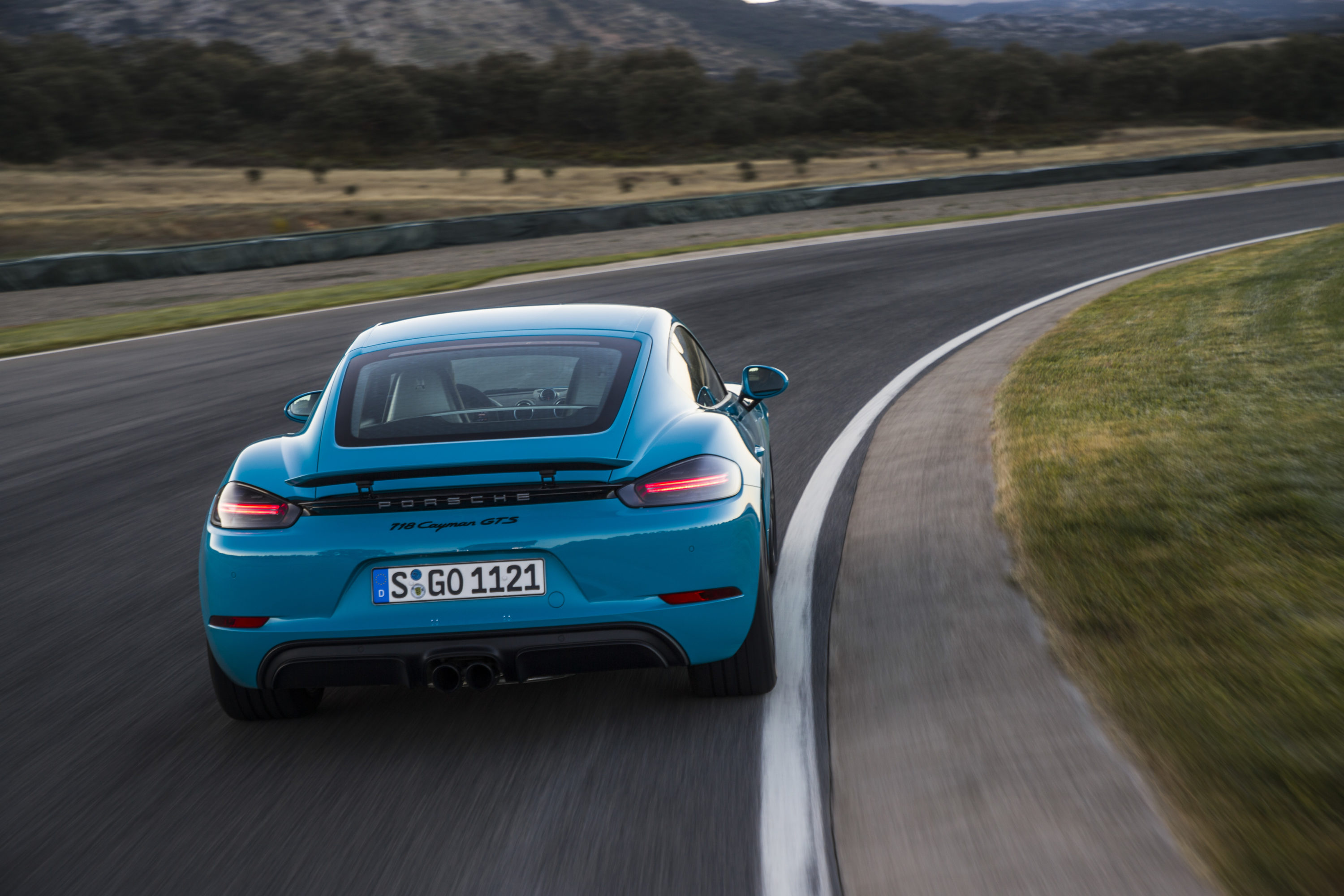 Perhaps the greatest challenge facing the 718 GTS comes from its own stable. A Cayman S is almost as proficient, very nearly as fast, and certainly almost as fun to drive, for R122 000 less – especially if you don’t have Kyalami at your disposal every day! DM

Hugely proficient and rewarding in every respect.