Book Extract: A private and telling insight into another side of Winnie 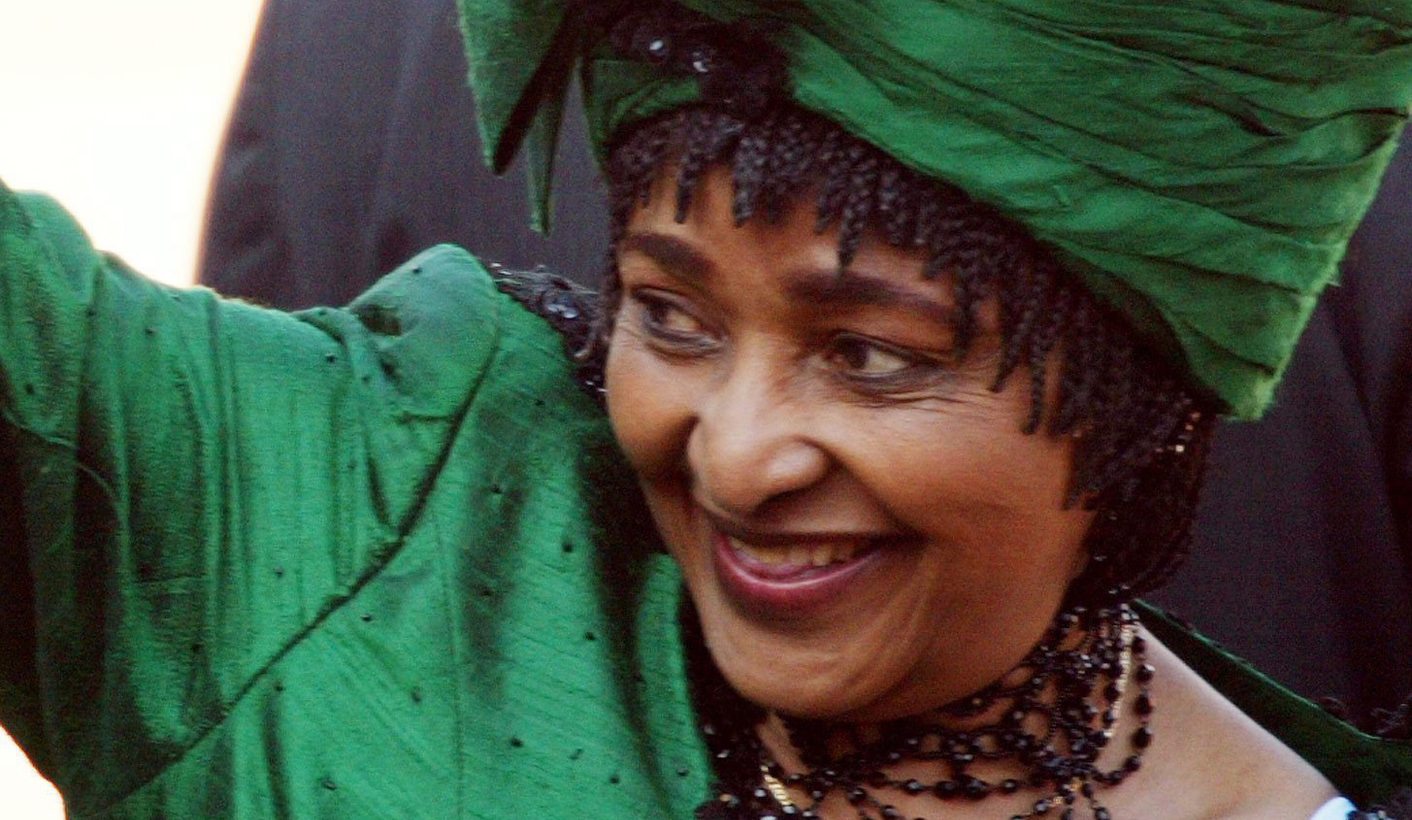 In his 2004-published collection “Of Warriors, Lovers and Prophets – Unusual Stories from South Africa’s Past”, author and veteran journalist MAX DU PREEZ included a small and personal vignette of a highly unusual and unexpected encounter with Winnie Madikizela-Mandela.

A Stranger on the Phone

Mention the name Winnie Madikizela-Mandela, and the name Stompie Seipei immediately comes to many a South African mind. The death of this child activist in 1989 will hang around Nelson Mandela’s former wife’s neck for the rest of her life.

Stompie’s murder was a very public story – at the time it took place, when Madikizela-Mandela was criminally charged with his kidnapping and assault, and again when she appeared before the Truth and Reconciliation Commission eight years later. To many, especially white South Africans, the death of 14-year-old Stompie defined Winnie Madikizela-Mandela. The media had a field day and declared that the Mother of the Nation had become the Mugger of the Nation.

Journalists and political analysts struggled to understand that ordinary people still loved and adored Winnie despite this dark stain on her record. All available information indicated that she was an irresponsible, power-hungry, selfish and cruel woman. How could people still call her the Mother of the Nation?

There is a story too insignificant ever to make newspaper headlines, that perhaps helps to answer this question. It does not involve politics or the liberation struggle. But it does offer a private and very telling insight into another side of Winnie Madikizela-Mandela.

First, the story of Stompie and how it came about. Winnie’s history is a dramatic tale of a spectacular rise to fame – and an even more spectacular fall from grace.

Nomzamo Winifred Madikizela was born in 1936 in the Eastern Cape. She studied in Johannesburg and became South Africa’s first qualified black social worker. She became involved in resistance politics in the late 1950s, which is how she met the charismatic lawyer Nelson Mandela, whom she married in 1958. It was also the first of many times she was detained by the apartheid police.

The couple had two daughters but not much of a marriage because Mandela’s political activism took up much of his time. She became a single mother when he was imprisoned in 1962.

Between 1962 and 1975 she was banned and jailed several times, which included a lengthy term in solitary confinement. The burden of being called Mandela while the real Mandela was locked up on an island far away was a heavy one. During the 1976 youth uprising in Soweto, she became the de facto leader of the ANC in the township, and a comrade, mother and inspiration to most of the student leaders. Her fearlessness became legendary: she was the only black leader who took no nonsense from white policemen.

She paid dearly for her obstinacy: in 1977 she was banished to the rural, conservative backwater town of Brandfort. She was harassed, isolated and traumatised. Most of her friends point to these years as the time when Winnie became unstable.

Once again defying the police, she returned to Soweto during the turbulent mid-1980s. This was the period of the most violent, lawless repression by the security forces. She surrounded herself with a number of undisciplined youths, called the Mandela United Football Club, “coached” by an unstable man of dubious character, Jerry Richardson.

Winnie’s behaviour became more and more erratic, and that of the young thugs (who didn’t actually play much football) more unruly and unpopular.

It was during this time that the 14-year-old Stompie Seipei entered her life. Despite his youth, he was a prominent figure among radical youngsters in Soweto, respected for his bravery and his ability to organise and inspire. But he was really only a child, a fact that didn’t escape the security police. Winnie believed that he had been recruited by the police, and she and her football club became paranoid that he would spill the beans on the underground activities at the Mandela household.

The boy was caught, taken to Mandela’s house and told to confess. He didn’t, and was savagely tortured, beaten and thrown against the wall – in Winnie’s presence, according to Richardson’s testimony. Stompie was subsequently killed by Richardson. Winnie was charged and found guilty of the boy’s kidnapping and of being an accomplice to assault. She received a suspended sentence and a fine. Richardson was sent to prison for Stompie’s murder.

During 1997 the Truth Commission held a special hearing on Winnie, her football club’s activities, and the death of Stompie and others. She again vehemently denied involvement in Stompie’s death. TRC chairperson Desmond Tutu praised her role in the Struggle, but added that something “had gone horribly wrong” in her life. He pleaded with her to apologise to Stompie’s mother and the families of other victims, which she did – some said reluctantly.

Nelson Mandela publicly supported his wife through all this, but in 1995, when he was president, he fired her from her job as deputy minister and divorced her a year later. Thabo Mbeki, Mandela’s successor as president, clearly disliked her. At the 25th anniversary of the Soweto uprising in 2001, he shoved her away from him – on national television – when she approached to greet him on the stage. It was the most public of humiliations of a once proud symbol of the Struggle. Her political career faded after that.

And yet many township dwellers, unemployed mothers and youngsters continued to adore her, to still call her the Mother of The Nation. Why?

Because there has always been another side to this turbulent, enigmatic woman. This is one story that gives a glimpse of that.

It involves an old friend and colleague of mine, a newspaper reporter named Herman Joubert. I got to know Manie, as I called him, as a highly intelligent but complex man when we both worked at the Afrikaans newspaper Beeld in the late 1970s. I liked Herman, his sharp mind and his quirky sense of humour.

The incident happened before Stompie’s murder. We only got to know about it because Herman wrote a short column in Beeld many years later on 7 March 1995. Before that, nobody knew about the story.

Herman was a sub-editor at the time, which meant that he worked from late afternoon until early morning, Beeld being a morning paper. But on this particular night he had the day off. Perhaps that is why he was overcome by a “bitter loneliness” that night. Herman wrote that by one o’clock he could still not fall asleep.

“My children were far away from me, my marriage in pieces and I was on the edge of the precipice.”

He drank a beer and paged through his contact book looking at the telephone numbers. He had nobody to call. Then he noticed a number without a name next to it; probably a number he had been given by a reporter in the newsroom, but he had no idea whose it was. What the hell, he thought, he was going to phone a nameless telephone number.

A courteous young woman answered the phone and simply said:

“She is not here, she’ll call you later. It sounds as if you need help.”

He gave her his number, then fell asleep “in a world of horrible nightmares”.

Around 3am his phone rang. Herman had forgotten about his earlier call and wasn’t in a good mood when he answered the phone. A voice asked him if he had phoned earlier. He realised it was a black woman’s voice and was so irritated he slammed down the phone. But she phoned again.

“Are you Herman?” she asked. Then she identified herself as Winnie Mandela.

Herman was in such a state that he responded aggressively, telling her he didn’t need her help and she should leave him alone. But Winnie insisted: Why was he so lonely and depressed? What was going on in his life? Did he have children?

Herman ended up telling her his whole life’s story and all his sadness. Winnie listened and listened, occasionally asking a question.

“For the first time in many months someone really cared and listened to what I had to say,” Herman wrote.

At the end of a long conversation Winnie told him to make himself a sandwich, to drink a glass of hot milk and to go back to sleep.

She wished him a peaceful night and put the phone down.

“I followed her advice and for the first time in months I slept peacefully. I almost had the feeling that the angels were guarding over me,” Herman recalled.

His life got back on track after that and he never needed to talk to her again, although he was tempted sometimes.

Herman ended his column wishing Winnie well in the difficult time she was going through (1995), and reminded her that not only bad things revisit one, but also the good one has done.

If this was Winnie’s attitude towards a total stranger, and a white Afrikaans male to boot during the most hectic time of white oppression, I can begin to understand why so many people love her and are ready to forgive her mistakes. DM