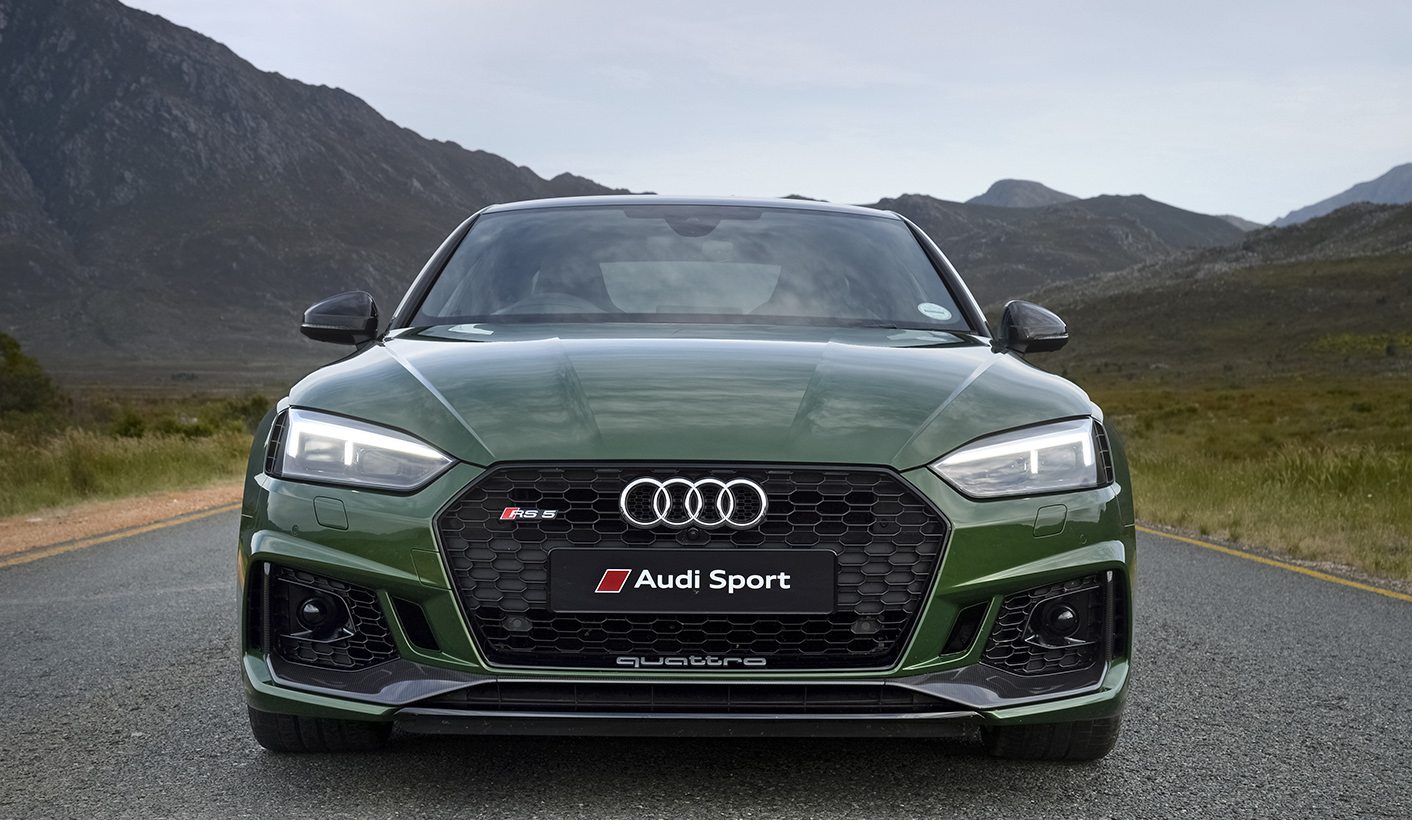 The A5 Coupé is one of Audi’s most handsome machines. The shape is both sensuous and athletic, with just enough visual muscle to keep languid elegance at bay. But the Audi Sport interpretation of the A5 is an altogether different machine: meet the Audi RS5. By DEON SCHOEMAN.

The Audi RS5 is one of those cars that catches you by surprise. From afar, it’s unmistakably Audi, while the combination of curved roofline, sleek sheet metal and wide tracks is unequivocally A5 Coupé.

But step closer, and some of the visuals no longer tally with the A5’s briskly elegant demeanour. This coupé looks hungrier, meaner – more aggressive. Compared to the standard, goody-two-shoes A5, it’s spoiling for a fight.

The discreet RS badge on the honeycomb grille confirms just that. The Audi RS5 is not only the flagship A5 derivative: it’s also one of the quickest cars in Audi’s impressive performance car arsenal.

The RS badge has graced many fast and furious (and famous) Audis over the years. Who could ever forget the iconic, Porsche-built Audi RS2 Avant?

The various iterations of the RS4 Sedan took the fight to BMW’s M3 and the Mercedes-Benz C63 AMG. More recently, the TT-RS has set its sights on more exotic machinery from Porsche and Jaguar.

In the Audi RS clan, the RS5 enjoys special status. Next to the TT-RS, it’s the only two-door on offer, while still delivering decent seating for four and a useful 465-litre boot.

Expect the usual go-faster cosmetics: vast, air-gulping intakes on either side of the Audi’s equally huge grille, a front splitter to direct air around and underneath the car, and extended sills to emphasise the planted, crouched stance.

At the rear, gutter-sized exhausts jut from a rear diffuser, while the boot lid gets a spoiler for downforce. And yet, the overall effect is understated by muscle car standards.

This particular example of the RS5 takes the sporty accoutrements another (expensive) step further. Carbon fibre – the lightweight stuff they use in F1 cars – is generously applied inside and out.

Splitter, diffuser, sills, spoilers, mirror caps and air intake surrounds all get the carbon fibre treatment, while the entire roof is carbon fibre, too. The cockpit continues that theme, with carbon inlays and detailing. It adds a high-tech air to the car – and a gobsmacking R167,000 to the price tag.

Even without the carbon fibre, the interior would be an RS5 highlight. It finds just the right balance between ergonomic functionality, cocooning comfort and clean design.

The high-backed front bucket seats look inviting, and their form-hugging contours provide good support. The deep-set rear seats look cramped, but for those prepared to squeeze past the front seats, there’s actually more space than expected.

At least the big doors open wide in true coupé style to make getting in and out easier – but given the average parking space size, you need to be careful not bang it into the car next to you in the process …

The instrument binnacle swaps traditional dials for a full-colour TFT display that allows a variety of information to be configured and displayed in crisp, clear graphics. You can change the instrument layout, run satnav maps behind the virtual dials, show vehicle data, and lots more.

A second display above the centre stack adds further versatility, allowing the driver to split information between the two screens. A big rotary controller with integrated touch pad makes wading through the infotainment system’s menus and options an intuitive and painless process.

You can use the touch pad to input destinations into the navigation system, or search for a name in the phone book – but from the driver’s seat, that’s a left-handed process, which is awkward unless you happen to be left-handed, or ambidextrous.

As for standard kit, the RS5 list of equipment is an expansive one, comprehensively covering convenience, luxury and safety. An equally extensive options list allows for individual customisation.

Press the start button, and the V6 roars into life with more than a measure of exuberance. Traditionalists will lament the departure of the previous RS5’s sonorous 4.2-litre V8, but the twin-turbo V6 has it’s own war cry, and it’s a stirring one.

Nor is the sound and empty promise: the 331kW on offer is the same as the previous V8’s, while torque has jumped to a stonking 600Nm. Add rear-biased quattro all-wheel drive, and the RS5 has the makings of a stirring speed machine.

While the gearbox is an eight-speed auto, the best way to experience the RS5’s urge is to switch to manual mode, and use the shift paddles on either side of the steering column.

Next, select the Dynamic setting in the drive mode menu: you’ll hear the exhaust become throatier, feel the throttle action sharpen, and the steering heft increase. With the optional adaptive dampers, the ride becomes notably stiffer, too.

This is the RS5 at its most aggressive. Floor the loud pedal, and the full anger of the V6 is unleashed. All-wheel drive means no urge is wasted on wheelspin, and instead, the Audi launches itself at the horizon with real intent.

If anything, the 3.9sec 0-100km/h factory claim is conservative: the RS5 covers ground with an alacrity that blurs the surroundings. Nor does it ever feel as if it’s going to run out of steam, as long as you’re brave enough to keep the accelerator firmly planted against the firewall.

For all its straight-line acceleration, the RS5’s most impressive performance is when the tar gets twisty. It carves its way from apex to apex with a G force-inducing tenacity that results in white-knuckled cornering speeds.

The ride, although firm, never feels uncompromisingly hard, and the steering is precise, if not always the most communicative. In fact, the RS5 is so composed, so downright competent, that even pushing the envelope feels, well, quite normal.

Ironically, it’s that sense of poise, almost regardless of speed or conditions, that is also the RS5’s Achilles heel. It demystifies the art of driving with gusto to the point where what should be heart-stopping becomes humdrum.

It’s only when you realise how quickly you come up on slower traffic, and how hard you have to exercise the big disc brakes to slow down, that you realise just what levels of velocity the RS5 is capable of.

So elevated are the Audi’s limits that they’re best explored in the closed confines of a race track. But in everyday driving, the coupé’s sheer composure makes it feel less compelling, less engaging, than its considerable talents deserve – even when pressing on.

Does that make it a lesser performance car than, for instance, the hell-for-leather C63 AMG, or BMW’s ferocious M4? Well, that depends.

The flipside of the Audi’s ultimate composure is that, day to day, it’s a supreme all-rounder. In peak hour traffic, where the Merc would always feel edgy, and the BMW out of sorts, the RS5 becomes a refined executive express, tootling along in Comfort mode, while letting the auto gearbox do the shifting.

It also tends to flatter the driver, encouraging rather than intimidating, while offering the omnipresent safety net of all-wheel drive for those who venture beyond their own capabilities. If it doesn’t always engage, the RS5 also doesn’t threaten, while still delivering breathtaking performance.

Add an inherent refinement often missing from performance machinery, a cabin tailored for both fast driving and comfort, and even the practicality of seating for four and a boot, and there’s a lot counting in the Audi RS5’s favour.

However, its most compelling rival may in fact be an in-house one. The S5 Coupé is not as extrovert, but it’s still unmistakably athletic. It makes do with less power, but there’s still more than enough urge to be deemed sporty. And driving it with vigour may end up being more rewarding.

Beautifully executed inside and out. Extremely rapid.