Op-Ed: US Secretary Tillerson’s visit unlikely to cut much ice with African Leaders 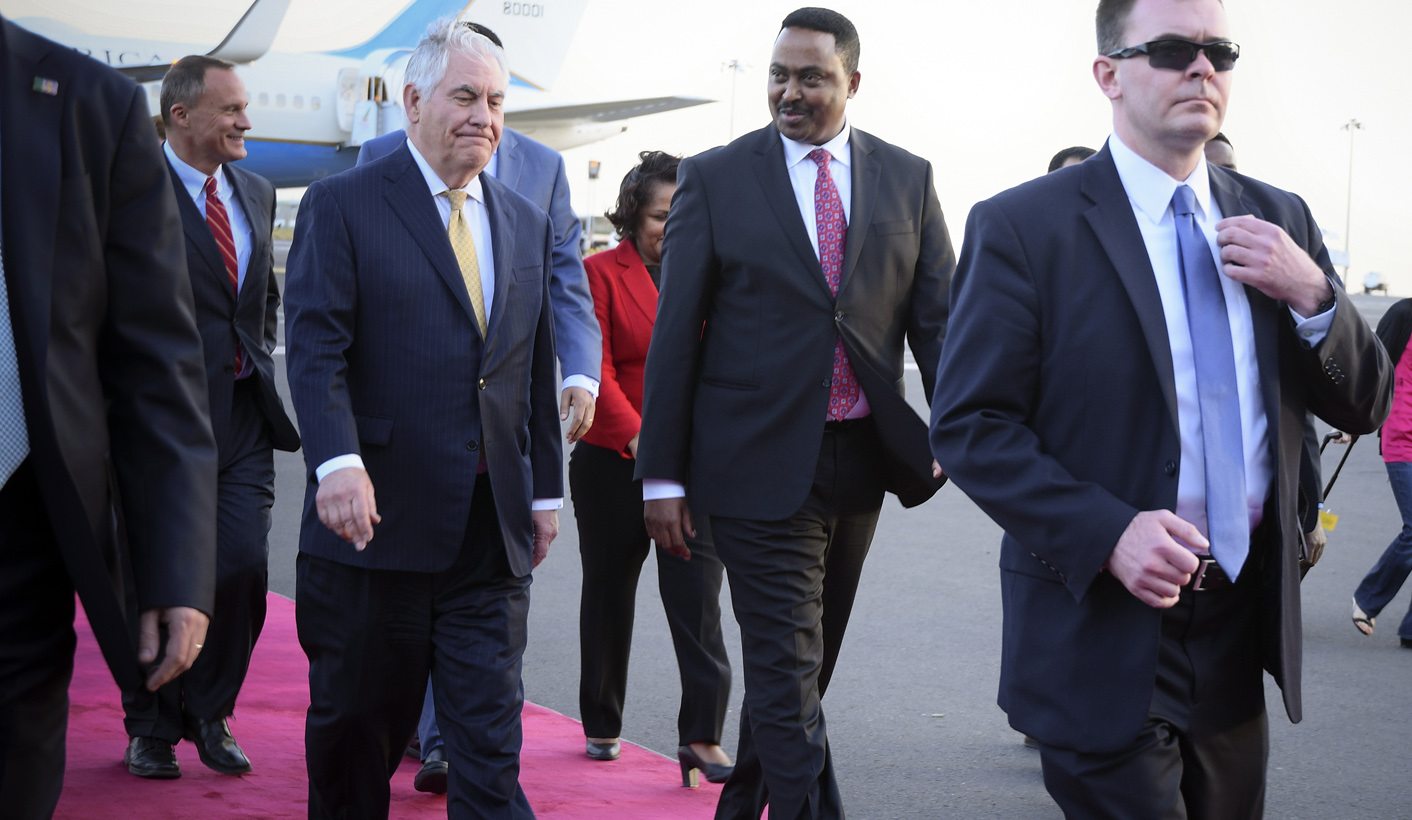 US Secretary of State Rex Tillerson’s trip to five African countries will probably not make much of a positive impression on most African governments. African leaders are keenly aware that President Trump and his administration have very little interest in the continent. By JOHNNIE CARSON.

The visit to Africa by United States Secretary of State Rex Tillerson, his first since taking office 14 months ago, will do little to shore up the Trump administration’s relations with Africa, or reverse America’s diminishing influence in the continent.

The administration has made a number of political faux pas on Africa during its first year in office, and Tillerson’s goodwill trip, slated to include stops in Ethiopia, Djibouti, Kenya, Chad and Nigeria, is not likely to erase them.

The visit has been billed by a senior State Department official as a follow-up to Secretary Tillerson’s hastily arranged and poorly attended meeting with African foreign ministers in Washington in November 2017.

Focus on Security and Counterterrorism

Although the ministerial meeting covered trade, development and security issues, Tillerson’s current trip will probably be heavily focused on security co-operation and America’s support to its key African partners in the fight against al-Shabaab in Somalia and Boko Haram in north-eastern Nigeria and the Lake Chad region.

The one common denominator in all five countries he will visit is security and counterterrorism.

Djibouti, Ethiopia and Kenya are all major security partners in Somalia and the Horn of Africa, and all three have been key players over the past decade in AMISOM, the African Union force that has been fighting al-Shabaab in Somalia.

Djibouti, a tiny country with a population of less than one million, has served as the hub of American military operations in the region. Strategically located north of Somalia and across the Red Sea from war-torn Yemen, Djibouti is home to several thousand US forces at Camp Lemonnier, the largest concentration of US soldiers in Africa. As long as al-Shabaab remains a threat in Somalia, Camp Lemonnier will be a keystone in the US defence network in the region.

Tillerson’s visit to Djibouti is also intended to counter China’s growing influence and presence in that country. In the past decade, China has pumped millions of dollars into the tiny enclave and has been actively repositioning itself to be Djibouti’s number one development and security partner. Beijing recently completed two major projects in Djibouti: a multimillion-dollar rail line into landlocked Ethiopia and China’s first overseas military base, a sprawling complex that rivals that of the United States.

The importance of Djibouti was signalled early in the Trump Administration when Secretary of Defence James Mattis travelled there in April 2017, just months after the administration took power. Although Tillerson should engage Djibouti’s leaders about democratic backsliding and increasing corruption, he will probably concentrate on underscoring the importance Washington continues to place on this relationship.

Kenya and Ethiopia are also key regional partners in the fight against al-Shabaab.

Kenya, which has been the target of several horrific al-Shabaab terrorist attacks, has several thousand troops in Somalia as a part of AMISOM. Tillerson will want to reassure Kenya, America’s oldest security partner in the region, of Washington’s continued military and intelligence support. Although there are good reasons for Tillerson to have an expanded conversation with Kenyan officials about corruption, election reform and improving the country’s political climate in the aftermath of the 2017 presidential elections, that is a conversation that is likely to be muted or non-existent.

Ethiopia, which has the region’s largest and most effective army, has been fighting al-Shabaab since 2008. The country is experiencing serious political tension and uncertainty, but Tillerson’s focus in Addis will be dominated by security concerns. He will probably use his visit to reaffirm US support for the government, and to caution the government not to allow domestic political issues to distract from its counterterrorism efforts in the region.

Shoring up ties with Nigeria, Chad

In West Africa, Tillerson will use his stops in Nigeria and Chad to shore up and repair relations with the two countries that are leading the fight against Boko Haram.

US-Nigeria security relations have not always been smooth and Nigerian officials have chafed at past American restrictions on the purchase and acquisition of US military equipment, especially aviation assets. Tillerson will reaffirm American support for Nigeria while encouraging officials to intensify their fight against Boko Haram and to enhance their co-ordination with states in the Lake Chad region, where Boko Haram is operating.

The most difficult stop on Tillerson’s trip will be Chad. Although it is the most effective member of the G-5, the five nation regional anti-terrorism network operating against Boko Haram in the region, Chad has been shamed and singled out by the Trump administration as one of the eight largely Muslim states whose citizens are subject to a ban on travel to the United States.

Tillerson will be eager to thank Chadian officials for the role they are playing in fighting Boko Haram while quietly reassuring them that the State Department will do all it can to have Chad removed from the list of countries affected by the travel ban.

Talking softly about Democracy and Governance

The secretary’s trip to these five countries will probably not make much of a positive impression on most African governments, whose leaders will recognise the visit for what it is – an effort to shore up America’s anti-terrorism security alliances while talking softly about democracy and governance, development and trade.

African leaders are keenly aware that President Trump and his administration have very little interest in the continent. They know that many of his global policies will have a negative impact on Africa, being aware of his administration’s decision to pull out of the global climate change treaty, its assault on international trade agreements, cuts in the US President’s Emergency Plan for AIDS Relief (PEPFAR) and public health funding, the reduction of support for the Young African Leaders Initiative (YALI) and the decline in resources for democracy and governance work.

They also recognise Washington’s expanded emphasis on military and security issues, which is a real priority for some countries but which perpetuates the erroneous impression that most of Africa is unstable and mired in conflict.

The Dark Cloud hanging over the trip

And the heavy dark cloud hanging constantly over the Tillerson trip will be President Trump’s disparaging and insulting remarks about Africans, his “Nambia” comments at an event at the United Nations and his dismissive treatment of African leaders at the 2017 G20 and G7 summits. African leaders are also aware of Tillerson’s last-minute cancellation of a previous meeting with the chairperson of the African Union.

Tillerson will no doubt receive a friendly reception in the countries he visits. After all, Africans are extremely hospitable. But many of the leaders he meets will wonder – like many Washington political observers – how long he will actually remain in his job. DM

Johnnie Carson, the US Assistant Secretary of State for African Affairs in the first Obama administration, is a senior adviser at the United States Institute of Peace.

Photo: US Secretary of State Rex Tillerson (L) walks with Ethiopian Foreign Minister Workneh Gebeyehu (2-R) upon his arrival at the Bole International Airport in Addis Ababa, Ethiopia, 07 March 2018. Tillerson is visiting Ethiopia on his first official tour of Africa before travelling to Chad, Djibouti, Kenya and Nigeria. EPA-EFE/STR