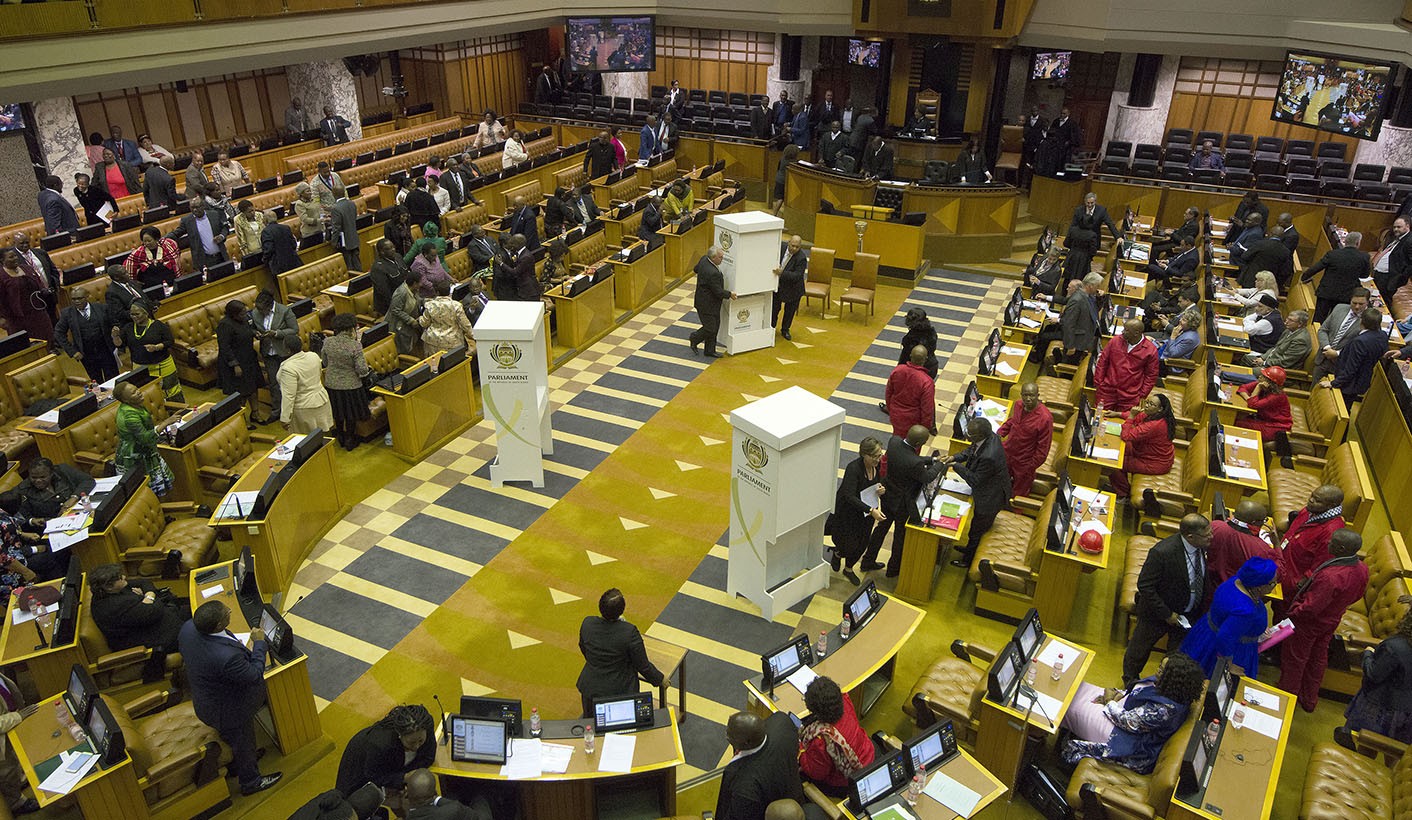 Opposition parties said on Monday that South Africa could not be held hostage by ANC factional battles – and that fresh elections must be called urgently. Speaking as the NEC was meeting to decide on President Jacob Zuma’s future, opposition leaders insisted there could be no ANC “elitist arrangement” and the EFF motion of no confidence in Zuma must be debated this week, followed by the dissolution of Parliament. By MARIANNE MERTEN.

As far as opposition parties are concerned the ANC National Executive Committee (NEC) discussions on President Jacob Zuma’s future amounted to little more than a transition between one faction of the ANC and another. At no stage during the past week’s discussions, on what is called “the transition” in ANC speak, has the governing party actually said why it wanted Zuma to go after years of standing by him in a series of scandals.

It could not be an internal tea party to decide who led South Africa. Said DA leader Mmusi Maimane: “Anyone who wants to lead the ANC, Parliament, South Africa, must have a mandate from the people of South Africa.”

And the move to dissolve Parliament would go ahead even if the ANC NEC decided to recall Zuma, opposition leaders agreed. That’s because it did not matter whether Zuma left the Union Buildings at his party’s instruction. Parliament had been damaged because it had failed to hold him and his administration to account, as emerged in two Constitutional Court judgment.

Most recently, in December 2017, that court found Parliament had failed to hold the president accountable and directed Parliament to implement rules for the removal of a sitting president under Section 89 of the Constitution. In March 2016 the Constitutional Court in its ruling on Nkandla found that Zuma had breached his oath of office and that the National Assembly had acted “inconsistent with the Constitution” by replacing then Public Protector Thuli Madonsela’s remedial action – that Zuma had to repay a reasonable percentage of the cost of non-security upgrades – with its own decision to absolve Zuma from any repayments for the swimming (fire) pool, cattle kraal, chicken run and amphitheatre that were deemed to be necessary security features.

Opposition parties said on Monday that they were prepared to canvass a fresh mandate from South Africans in new elections. This poll would have to be called within 90 days of the successful dissolution of Parliament under Section 50 of the Constitution.

Daily Maverick understands that an offer from the ANC post-Zuma to call the 2019 election possibly as early as February 2019 – it is apparently one of the issues on the table – would not be entertained.

Of course, there is a political gamble at hand. The ANC is under pressure after almost two years of bruising factional lobbying ahead of its December 2017 national conference. It has lost significant support, according to its own diagnostics, largely over the Nkandla debacle, State Capture and social distance as leaders enjoyed the perks of office.

The ANC saw waning electoral support in the 2016 local government elections that cost it control in South Africa’s economic heartland of Johannesburg, the administrative capital of Tshwane, and Nelson Mandela Bay, the economic hub of the Eastern Cape. In Ekurhuleni the ANC only held on to power through a coalition deal, as it did in many other municipalities.

Right now the ANC still holds the numbers in Parliament – 249 of the 400 National Assembly seats, with the DA holding 89, the EFF 25 and the IFP 10, followed by anything from four seats to one for other opposition parties. In the past, including the August 2017 motion of no confidence by secret ballot, the ANC has relied on its numerical strength to get its way.

And so the governing party could defeat a motion to dissolve Parliament, and insist under a new leadership talking renewal and unity that there was a new tone and mood, as did Cyril Ramaphosa when as ANC president on Sunday he launched the party’s centenary celebrations of Nelson Mandela’s birth.

On Monday opposition parties argued that anyone who thought that once Zuma was gone South Africa’s problems would disappear was in for a shock. Their plan of action? The EFF motion of no confidence, currently set down for 22 February, must be scheduled for this week. If National Assembly Speaker Baleka Mbete did not do so by 10:00 on Tuesday, the EFF has its court papers ready to file there and then.

In the games of politics, much hinges on the outcome of the ANC NEC deliberations. It could decide to recall Zuma, which, if he agreed to heed the decision of his life-long political home as had Thabo Mbeki in September 2008, could take a day or two for that process to be finalised. This could make a motion of no confidence moot, if not the call for Parliament’s dissolution.

If Zuma decides not to go, on his party’s request, it’s uncharted territory for the ANC. Only Parliament can remove a sitting president from office, either through a Section 89 motion – this is not possible right now as the rules have not yet been finalised – or a motion of no confidence under Section 102 of the Constitution.

And despite its longstanding tradition of not to be even seen to follow outsiders’ calls, the ANC might find itself in the inevitable position of having to agree with the EFF motion of no confidence, if it really wanted Zuma to leave government. There’s little to no chance of the ANC parliamentary caucus bringing its own, given the limits of scheduling such motions.

The ANC December national conference resolved that the Presidency should be the centre of state power, dubbed the “Super Presidency”. However, the Constitution outlines a system of co-operative governance and in Section 55 obliges Parliament to “ensure all executive organs of state in the national sphere of government are accountable to us, and to maintain oversight of the exercise of national executive authority…”

Regardless of what the ANC NEC decides, and what follows from that decision, opposition parties have upped the political ante and pushed for the recognition of Parliament as central to South Africa’s constitutional democracy. DM

File Photo: Voting booths are brought into parliament for a motion of no confidence vote against South African President Jacob Zuma in a sitting of parliament in Cape Town, 08 August 2017. EPA/Rodger Bosch