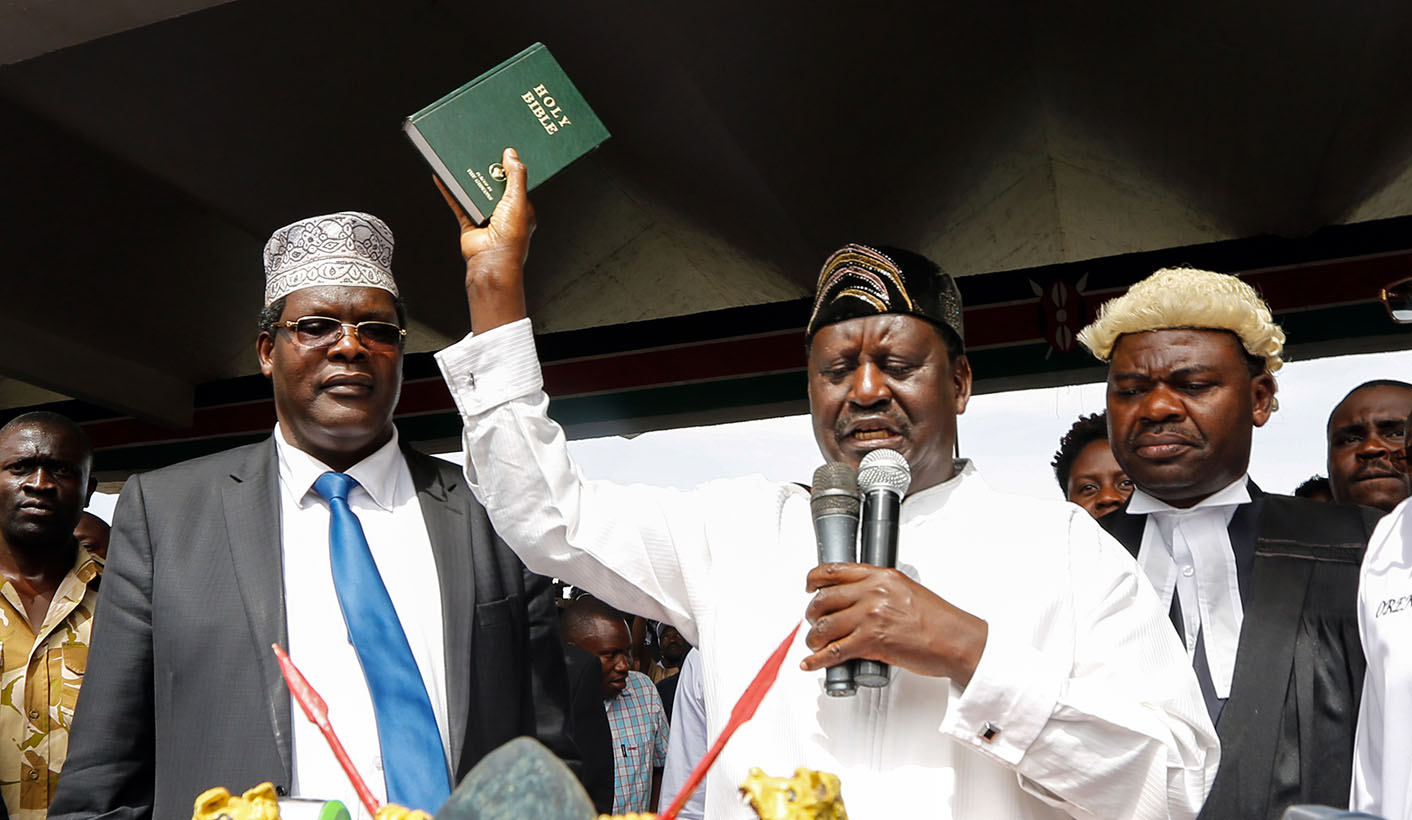 Kenya’s opposition is accused of treason, but the government’s actions are themselves a threat to democracy. By Simon Allison for ISS TODAY.

When Kenyan President Uhuru Kenyatta was officially anointed as president for the second time last November, he swore an oath – the same one he swore at his first inauguration in 2013.

With his hand on a Bible, he promised: “I swear that I will be faithful and bear true allegiance to the republic of Kenya; that I will obey, preserve, protect and defend this constitution of Kenya, as by law established, and all other laws of the republic; and that I will protect and uphold the sovereignty, integrity and dignity of the people of Kenya.”

Last week, Kenyatta’s arch-enemy, opposition leader Raila Odinga, made an identical pledge when he inaugurated himself as the “people’s president”, mimicking the form and the wording of the official ceremony.

There is a major difference, however, between the oath made by Kenyatta, and that made by Odinga.

Odinga’s oath is political theatre: as much as he and his supporters would like to pretend otherwise, it has no force in law. Kenyatta’s oath, on the other hand, is legally binding. It provides the standard by which the Kenyan president must be judged.

The events of the past week suggest that Kenyatta and his administration are falling far short of that standard. Even though Odinga’s ‘inauguration’ was undoubtedly a provocative act that carried grave risk of bloodshed, the government’s heavy response suggests that the president has already forgotten his own inauguration day promises.

A major black mark on Kenyatta’s record is how the government has silenced independent media. A free press is supposed to be a pillar of any functional democracy, and Kenya’s journalists have long been hailed as among the loudest and most effective on the African continent.

But in switching off three independent TV stations because they insisted on broadcasting Odinga’s mock inauguration, the government overstepped its authority. It did it again with the attempt to arrest three journalists with Nation Media group – Linus Kaikai, Larry Madowo and Ken Mijungu – who were forced to spend a night in a safe house to avoid detention.

“Every day that these TV stations are kept off air and their journalists are harassed or intimidated further erodes Kenya’s position as a leader of press freedom in Africa,” said Angela Quintal, Africa programme co-ordinator for the Committee to Protect Journalists.

A Kenyan activist, Okiya Omtatah, took the government to court, demanding that the TV stations be returned to air. He won: on Thursday, the courts ordered the ban to be lifted for 14 days, while the case is heard more fully. But the government did not immediately comply with this order. It was only on Monday evening that two of the affected TV stations – KTN and Nation TV – were back on air, while Citizen TV remained switched off.

In a related incident, opposition politician Miguna Miguna was arrested last week on charges relating to his participation in Odinga’s mock inauguration. Police defied a court order granting him bail, and kept him in detention. “They acted in contempt of this court by not releasing Miguna Miguna,” said a High Court judge on Tuesday. Two other legislators were arrested on similar charges, and have been released on bail.

These incidents suggest a certain reluctance on behalf of the executive branch of government to carry out orders of the judiciary – a potentially dangerous breach of Kenya’s separation of powers.

This hardly comes as a surprise, however. Kenya’s Supreme Court annulled the first presidential election held in August 2017. The decision infuriated the president, who lashed out against the judiciary. “Every time we do something, a judge comes out and places an injunction. It can’t go on like this … there is a problem and we must fix it. I think those robes they wear make them think that they are more clever than the rest of us Kenyans,” said Kenyatta at the time. Kenyatta would go on to secure re-election on 26 October, albeit with the help of an opposition boycott.

Now observers fear that the promised “fix” is in motion. ‘The continued disobeying of court orders is really not good for democracy. We need to work in a way that strengthens our institutions because, if it gets to a level where judicial officers start to think someone is undermining their authority, we will not have a country,’ said George Morara, the vice-chairman of the Kenya National Commission on Human Rights, speaking to the Daily Nation.

Kenyatta’s supporters, and senior officials in his government, have repeatedly described Odinga’s attempt to swear himself in as president as treason. They may or may not be right – in a constitutional democracy, that claim must be tested in a court of law. But what has become increasingly obvious is that in cracking down on this alleged treason, Kenyatta and his administration have themselves flouted the rule of law, and violated the president’s promise, made under oath at his inauguration, to uphold the constitution.

Two wrongs don’t make a right. Whatever the sins of the opposition, the government’s response – which imperils the very foundations of the state – represents an even graver threat to Kenya’s democracy. DM

Photo: The leader of the Kenyan opposition National Super Alliance (NASA) Raila Odinga (C) raises a bible as he ‘takes an oath’ during the ‘swearing-in’ ceremony in Nairobi, Kenya, 30 January 2018. Odinga was ‘sworn-in’ as an alternative President of Kenya despite the warning by the government of Uhuru Kenyatta who won the disputed repeat Presidential election that such an act can amount to a treason. Photo: EPA-EFE/DANIEL IRUNGU