Theatre Review: The Color Purple – singing with one collective voice 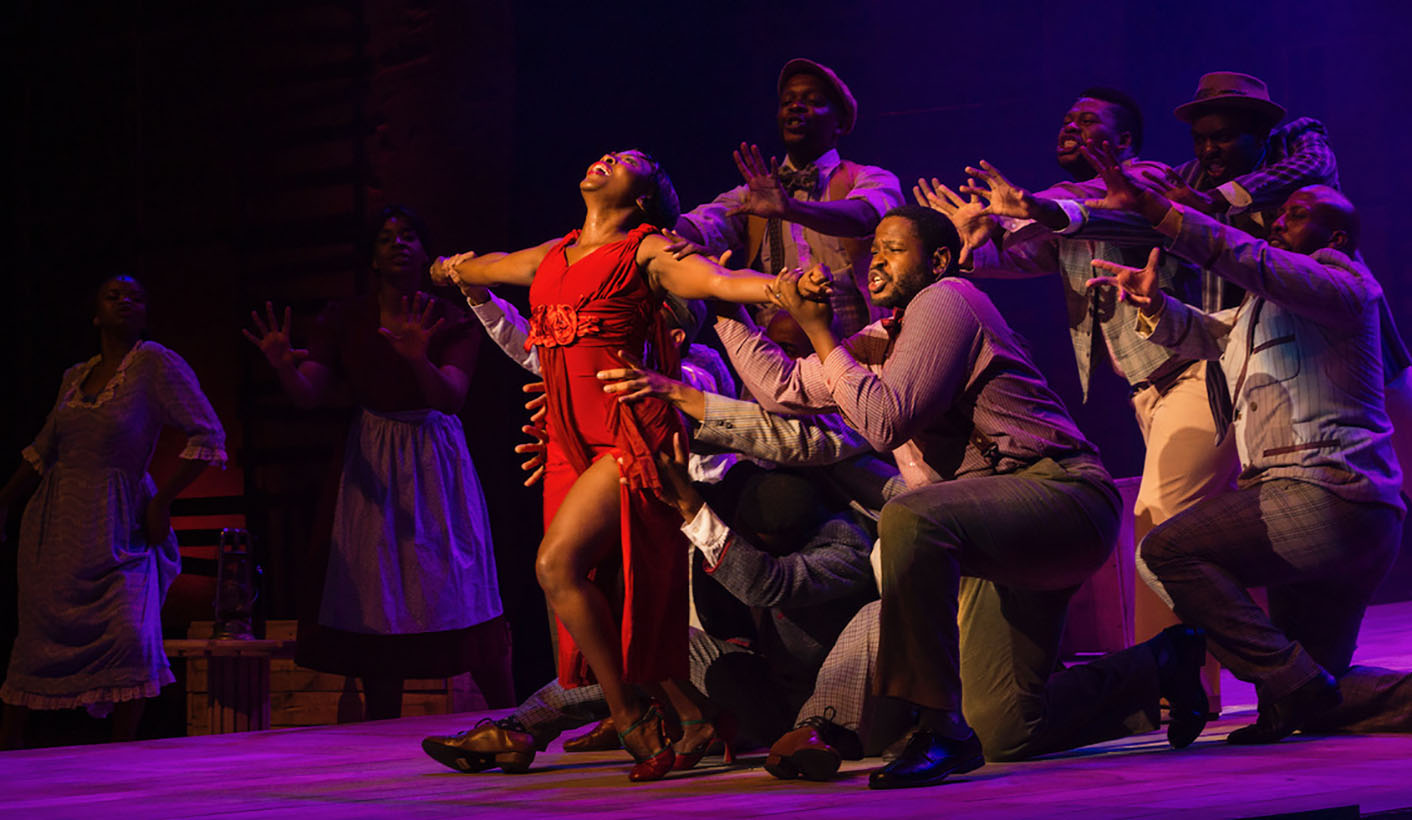 I don’t think I’ve ever seen a show where the standing ovation begins a couple of songs before the story has ended. But when the incredible Didintle Khunou belts out I’m Here in The Color Purple, the audience is right there with her, on its feet and wiping away tears above the smiles. Goosebumps abound. By LESLEY STONES.

Didintle Khunou has come out of nowhere to soar in this bold musical that makes brow-beaten black women the stars of its story. It’s a magnificent piece of work with a theme that South Africans need to emulate, and rise up against brutish partners to take control of their own destinies. Who knows, perhaps the cheering, clapping and hooting audience showing their love for the characters might just go out and start saying “hell, no” for themselves.

The Color Purple is an uplifting tale of sisterhood, survival and strength as women find their own path despite obstacles thrown at them from every direction. It’s full of warmth and humanity, with a mood that swings from joyful to sombre in a second.

The compelling and brutal story is based on the novel by Alice Walker about Celie, repeatedly raped by her father then married off to a violent husband who treats her as a servant that he beds.

Celie finally finds her steel thanks to Sofia, a large lady who takes no nonsense from anyone, and Shug Avery, the glamorous singer with “low morals” who men desire and the gossips jealously despise.

There’s a lot more going on in the plot too, and amazingly the musical manages to capture it all in a couple of mesmerising hours. The book was adapted into a film starring Whoopi Goldberg and Oprah Winfrey, then staged as a musical and trimmed into the version we have today. Marsha Norman is credited with the script and three artists are credited with the songs and lyrics, yet it sings with one cohesive voice.

Khunou as Celie is wonderful, with a naïve vulnerability that hardens into feisty survival and sweet voice that’s perfect for this mix of gospel, blues and jazz.

Neo Motaung is outstanding as sassy, no-nonsense Sofia, who stands up to wife beaters and to whites who treat blacks as second-class citizens. But it’s the reminder that men still treat their women as servants and punch bags that hits home today.

Lerato Mvelase gives the glamorous and fickle Shug an intense sexuality, reminding women that it’s fine to take charge in the bedroom, not the kitchen. She too has a stirring voice that turns her songs into superb moments.

While the main characters all shine brightly, the supporting cast is uniformly excellent. Oh, I almost forgot to mention the men – that’s how memorable these women are. Aubrey Poo as Mister struts and lashes out with simmering viciousness, while Yamikani Mahaka-Phiri charms with his delightful portrayal of Harpo, who comes to realise that treating women well won’t make him a sissy. He and Motaung have a smouldering rapport and have the audience laughing with their raunchy duet Any Little Thing.

Director Janice Honeyman does a wonderful job in bringing this complex and emotional work into exuberant life. It’s a lush and lavish show, with a stage expanding lavishly in every direction and jutting into the audience to draw us in. Scenery slides and slots into place on the fly, while the lighting by Mannie Manim illuminates the action beautifully.

The costumes are excellent and the live band led by Rowan Bakker is wonderful, with Bakker knowing just when to pause to let the audience make its own voice heard.

The only criticism came from a friend who said Khunou is too pretty to play Celie. The plot has people dissing her for being ugly, but she’s the hottest thing on stage, he said. That seriously is the only criticism, and it feels like quite a compliment. DM

The Color Purple runs at Joburg Theatre until March 4. Tickets from 0861 670 670, or www.joburgtheatre.com