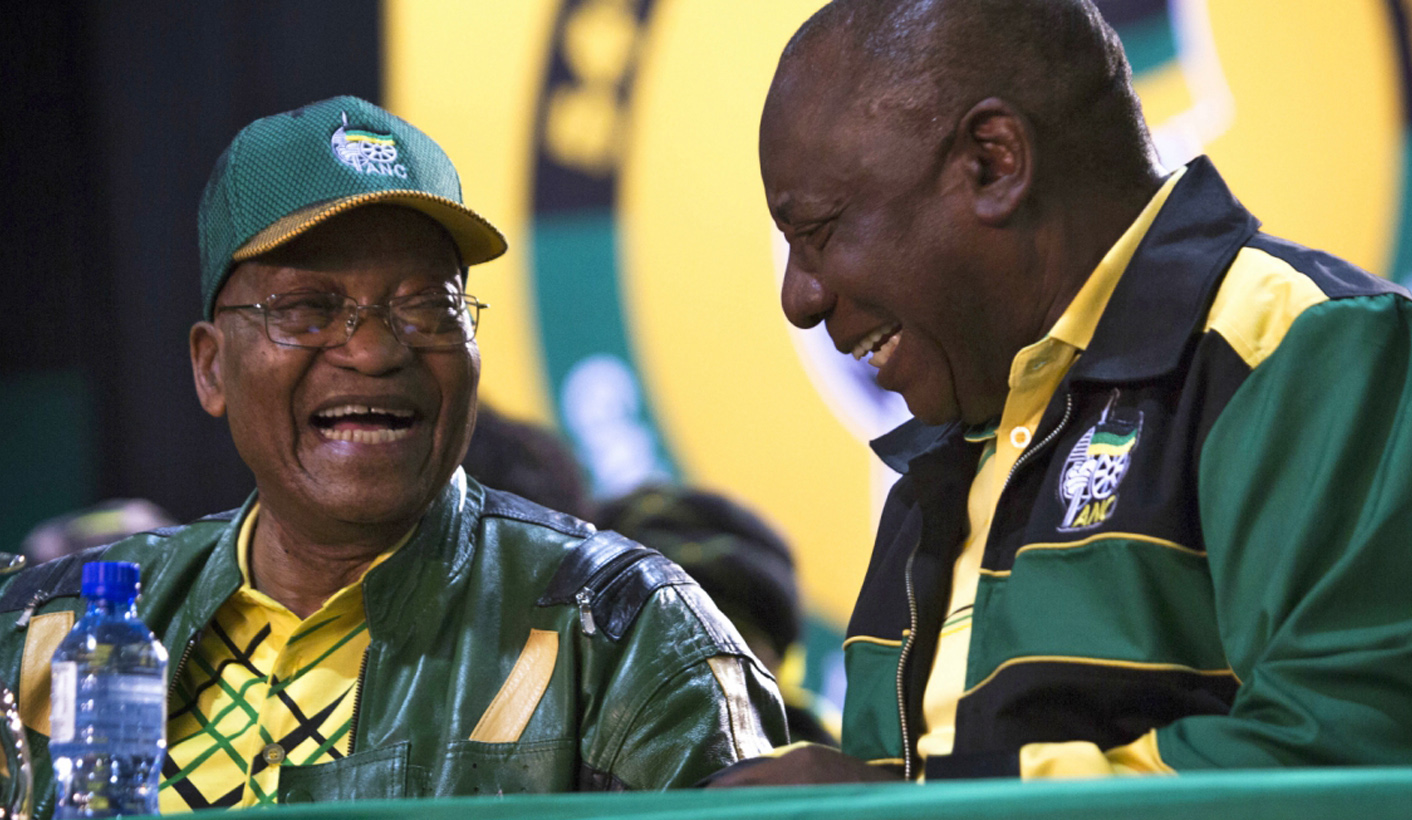 The political conflict between President Jacob Zuma and the party he professed undying love for is reaching new levels of confusion. While the National Working Committee spent Monday afternoon discussing what to do next, two different groups protested over his future. Meanwhile, both sides, Zuma and Luthuli House, are showing through their tactics that they are now reaching out for help from people and bodies outside the ANC. This is something new in our politics. It demonstrates the seriousness of the stakes involved, and how desperate they are both becoming. By STEPHEN GROOTES.

It was the perfect demonstration of how strange and odd the ANC’s internal politics has become. The party’s secretary-general walked out of Luthuli House to receive a memorandum from the Black First Land First grouping. They received him politely, and he thanked them for their discipline. As the group protesting to retain Zuma, this was a WhatsApp group in operation. But the ANC members, who were demanding that Zuma go, were booing Ace Magashule. Booing their own secretary-general. If ever anyone wanted proof that the battle for Nasrec was still going, here it was.

But in many ways, this is not surprising. It is well-known that the BLF (with whom this writer has a tiny piece of history) is the protest-wing of the Guptas. What is surprising is that Zuma now has to rely on organisations that are outside of the ANC for protection.

Zuma appeared to continue with this trend on Monday, with his visit to Zulu King Goodwill Zwelithini. Officially, this trip had been in the works for months, with the Presidency saying it had been supposed to occur in January. Obviously it is not known what was discussed, or if anything was decided. Zuma’s critics will remember bitterly how he has used both racial and tribal identities as political tools in the past. They will point to his behaviour over the controversial The Spear image, and the fact that he appeared to select more and more Zulu-speaking people for important jobs over time.

There will also be those who will be tempted to be apocalyptic about this. They will claim that Zuma is about to uncork some genie of racial and tribal identities that will somehow allow him to remain in power for ever and ever, and damage the country as a result. It is important to make the point that genies don’t actually exist. In this case, the identity of people who speak Zulu is incredibly diffuse; you can’t expect a group of people to “rise up” just because one of the people they look to for direction asks them to. And that’s before one considers whether in fact Zwelithini would consider it in his longer-term interests to help Zuma. The short answer is probably almost certainly “no”.

At the same time, the recent history of the BLF suggests that people who are paid to be racist don’t appear to succeed. There is no evidence of the BLF managing to actually achieve any of the political goals that it has set itself. It has become a laughing stock. From time to time, broadcasters give its representatives airtime. Even if the presenters don’t interrogate them, callers do, and simply rip them off.

Would you place your political future in their hands?

However, the recent behaviour of the ANC, well, those parts of it that want Zuma gone, also shows that they are going outside the ANC for help too.

In the past, ANC meetings about the future of a president or leader have usually been cloaked in secrecy. This time around, it seems the top leaders have actually been gathering up support where they can find it. The visit by ANC national chair Gwede Mantashe to the St John’s Apostolic Faith Mission on Sunday, just before the trip to see Zuma, looked a lot like the seeking of a blessing. Comments by Mantashe before the meeting seemed aimed at ensuring everyone knew what was at stake.

At the same time, possibly unbidden, other groups have also demanded that Zuma go. All in all, it is a useful reminder to him of how unpopular he actually is in society at large. This goes back towards the big advantage that Ramaphosa has in the current political contest. It is obvious that he has the backing of much of society, through the churches, civil society groups and business. Against this, Zuma has only the BLF and ANN7.

There now appear to be two more battlegrounds ahead. The first is the ANC’s national executive committee. Much has been said about its make-up, and how people like Mosebenzi Zwane and Nomvula Mokonyane would always defend Zuma. The balance of power here is complex, with many people who would benefit from Zuma going, and many who would benefit from him staying. At the very least, they would stave any prosecution they could face by ensuring that he remains where he is. This means that it could be a long, hard battle within the NEC. No doubt someone will point to polling data showing that time is running out ahead of the 2019 elections. But this is not a simple problem to be fixed. It’s not Nasrec 2017 where everyone can be a winner. Instead, a proper, actual hard decision has to be made. Something the ANC has not been particularly good at over the last few years. Then there is Parliament itself, and what would happen if or when a no confidence motion is brought.

It is trite to say that we live in new and interesting times. In the past, it has always been unthinkable for people facing internal ANC battles to seek support outside. Zuma himself would always scold those who did, now he himself is guilty of exactly the same thing. But his opponents are growing desperate too. They need him out, and they need him out soon. And in a fight, when both sides are desperate, strange and new, and sometimes shocking, bad things can happen. DM

Photo: Cyril Ramaphosa and Jacob Zuma at the opening of the ANC’s Nasrec conference in December 2017. (Daily Maverick photo)