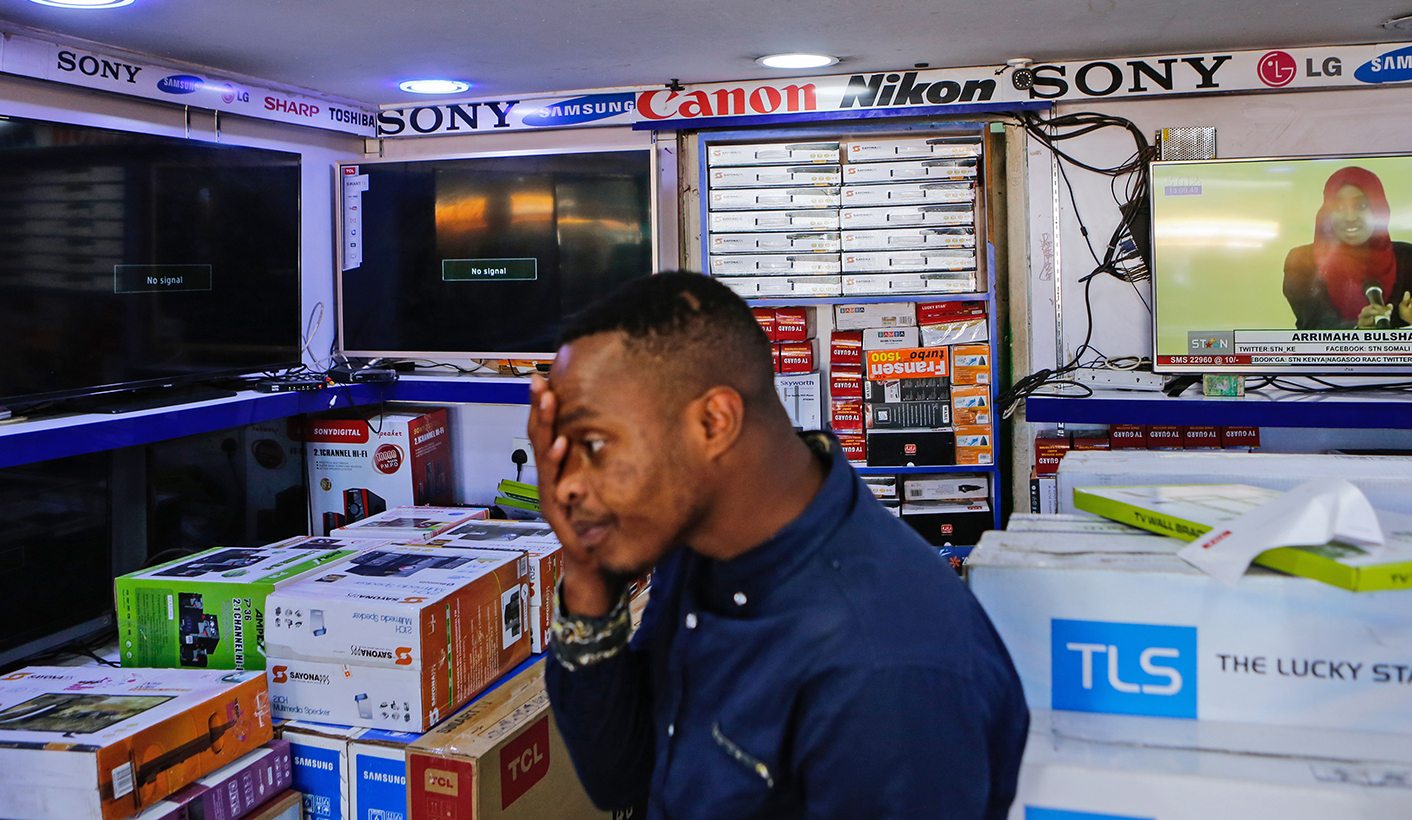 East Africa’s leading economy is on tenterhooks, waiting nervously to see whether the direct confrontation between President Uhuru Kenyatta and perennial also-ran Raila Odinga – the culmination of a rivalry which they inherited from their fathers at independence – will plunge the country into violence and chaos. By PETER FABRICIUS.

In their new book How Democracies Die, Steven Levitsky and Daniel Ziblatt explain how, in the modern era, democracies die not in the traditional fashion, as victims of coups and revolutions, riots and warfare.

Instead, “democracies erode slowly, in barely visible steps. They rot from the inside, poisoned by leaders who ‘subvert the very process that brought them to power,’, as Ezra Klein wrote in a review of the book for Vox.

“They are hollowed out, the trappings of democracy present long after the soul of the system is snuffed out.”

Is this what we are seeing in Kenya now, as President Uhuru Kenyatta this week defied a court order to allow four major TV channels to resume broadcasting? His government blacked out Nation TV, Citizen TV, Inooro TV and KTN to stop them broadcasting Tuesday’s “inauguration” of the main opposition leader Raila Odinga as “the people’s president”.

The government said Odinga’s move was treasonous. He performed the ceremony in the heart of the capital Nairobi in Uhuru Park after the fiasco of last year’s elections in which he was the main challenger to Kenyatta.

Kenyatta was officially declared the winner of the first round in August but the Supreme Court then annulled the elections. Odinga pulled out of the second round, in October, because he alleged that the electoral process had not been reformed sufficiently in the interval to ensure this poll would be any freer or fairer than the first.

Kenya has never been a very solid democracy. It was a de facto or de jure one party state from independence in 1963 to the early 1990s when long-time president Daniel arap Moi grudgingly bowed to pressure to allow multiparty democracy.

But the deep ethnic divisions in the society have never been adequately addressed and so have erupted in turbulent politics ever since. After the 2007 elections which the perennial also-ran Odinga lost to Mwai Kibaki, widespread political and ethnic violence erupted, killing some 1,200 people.

The results were widely believed to have been rigged and this prompted electoral, judicial and constitutional reforms, raising hope that future elections would be legitimate and the outcomes would be accepted by all candidates and parties.

The first test of the reforms was in the 2013 elections when Kenyatta and Odinga faced off for the first time. Kenyatta was declared the winner with a precarious 50.5% of the vote, meaning that a second round of voting was not needed. Odinga unsuccessfully contested the results in the Supreme Court and reluctantly accepted defeat though he clearly believed he had been cheated once again.

His official defeat once again in last year’s elections was too much for him and despite the urging of many of his supporters and of the international community, Odinga first refused to participate in the run-off elections and then rejected the results, despite the Supreme Court having declared them valid.

That led to his creating the “National Resistance Movement” (NRM), a name with ominous undertones of militant resistance. Kenyatta’s government branded it a criminal organisation. Then Odinga had himself inaugurated as “people’s president”. The MP who swore him in – wearing a colonial-style judge’s wig, no less – was arrested immediately after the ceremony.

The TV stations which had planned to broadcast the alternative inauguration were shut, and remained shut, and several print journalists who reported on the event went into hiding, fearing arrest.

East Africa’s leading economy is now on tenterhooks, waiting nervously to see whether this direct confrontation between Kenyatta and Odinga – the culmination of a rivalry which they inherited from their fathers at independence – will plunge the country into violence and chaos.

Kenyatta’s father Jomo was independent Kenya’s first president while Odinga’s father Oginga was his deputy before they fell out soon after independence.

Related to this fear of insurrection but conceptually separate from it is the Kenyatta government’s growing intolerance of the media and of civil society.

This is prompting analysts to warn that Uhuru Kenyatta is taking Kenya down the same road to autocracy as Egypt’s Abdel Fattah El-Sisi and Turkey’s Recep Tayyip Erdo?an have taken their countries.

“He is taking the script out of Erdo?an’s playbook or even Sisi’s,” says political journalist Alphonce Shiundu. “Dismantle all institutions that can legitimately question his authority, through propaganda or actual force, including arrests. He is not only interfering with legitimate business enterprises, but he is also curtailing journalism, free expression and free media. It is not a surprise that his administration warned editors that the media houses will be shut down if they aired Raila Odinga’s swearing-in.

“What worries me is that he actually went through with the threat, and his online propaganda gang is defending the decision and you can see the official position being that the TV channels should remain shut until ‘investigations’ are complete – never mind that Kenya has laws of presumed innocence until proven guilty.

“It is also worrying that he can ignore a court order and ‘punish’ media houses unilaterally for doing their job. It is like he is ruling by decree: You don’t have to violate any law, just his orders, and he will send the police to arrest you.

“There are plenty of mechanisms in the laws of Kenya to deal with media malfeasance, and most of these bodies that deal with such are under the stranglehold of the State. But, no, he won’t use those, he has to show he is boss.”

Shiundu says the defiance of the court order to allow the TV stations to reopen was by no means the first example of Kenyatta’s increasingly authoritarian governance.

“There are plenty of examples,” he says.

“First, he dealt with the civil society for helping with the investigations into the post-election violence in 2007/08 and the demand that the masterminds and perpetrators should be tried at the International Criminal Court. That was his agenda number one as soon as he got into power,” Shiundu said, adding that government propagandists branded civil society advocating for better governance as ‘evil society’.

“Then he went for the media with very punitive laws including those proposing penalties of Sh500,000 ($5,000) for individual journalists and Sh20-million for media enterprises. We contested that in court, won some concessions, lost some.

“And then he approved some laws, called security laws, to keep a tight stranglehold on how the media reported terrorism and security-related issues. This was in 2014. Some of these issues were contested in court. Some clauses were deleted.

“At the same time, there were attacks on journalists, such as a former editor at the Nation (Dennis Galava) who wrote an editorial critical of Kenyatta’s administration in 2015 and the journalist was fired; then it also happened to the cartoonist Gado.

“In summary, what I sense from all these looked at together is that Kenyatta has been on a systematic attack on institutions and if he is allowed to go ahead unchallenged, he will turn Kenya into not just a dictatorship, but a police state!”

However, Kenyatta also seems to be playing a tactical game. Often his threats in the past against watchdog institutions such as the judiciary, the media and civil society remained just that – threats.

For example, his government announced plans last year to shut down two rights bodies, Kenya Human Rights Commission (KHRC) as well as the Africa Centre for Open Governance (AfriCOG), because of their criticism of the first round of the elections.

But a few days later the government suspended the move to shut down the two organisations.

While the government has promised a more tolerant legal environment for NGOs, the new law has not yet materialised. Meanwhile civil society organisations remain regulated under the NGO Co-ordination Act of 1990, which empowers the NGOs Co-ordination Board to monitor and register organisations. The board has broad authority to refuse registration, and cancel or suspend a certificate of registration, according to the Devex online news bulletin.

In 2015 the NGOs Co-ordination Board said that it did a forensic audit of more than 10,000 NGOs and found 957 of them non-compliant, saying that some had failed to account for funds they received. The board said it would deregister the NGOs and ordered the Central Bank to freeze their accounts.

KHRC, one of the NGOs found to be non-compliant, took the case to the country’s Supreme Court, which found that the NGOs Co-ordination Board’s actions were “unconstitutional and void” Despite the ruling, however, the NGOs Coordination Board targeted KHRC again for deregistration in 2016 and in August 2017.

Kenyatta’s government appears to be playing a cat-and-mouse game with the media and civil society, trying to keep them off-balance with threats and warnings, while at the same time ensuring it keeps on the right side of the international community.

The open defiance of the court order to re-open the TV stations may or may not represent a step beyond such harrassment, an important line that the Kenyatta government has now crossed, from democracy to autocracy. Some analysts are waiting for the next move before passing judgement.

In their book Steven Levitsky and Daniel Ziblatt write, “This is how democracies now die. Blatant dictatorship — in the form of fascism, communism, or military rule — has disappeared across much of the world. Military coups and other violent seizures of power are rare.

“Most countries hold regular elections. Democracies still die, but by different means. Since the end of the Cold War, most democratic breakdowns have been caused not by generals and soldiers but by elected governments themselves.

Autocracy by stealth. That is what Kenyans need to fear. DM

Photo: A Kenyan electronics dealer stands in front of black screens on televisions showing ‘No Signal’ on what is supposed to be three of Kenya’s local TV channels taken off air, at an electronics shop in Nairobi, Kenya, 01 February 2018. Kenya’s three private TV stations – NTV, KTN and Citizen TV – reportedly were taken off air on 31 January following their live coverage of the opposition’s ceremony to ‘swear in’ Raila Odinga who lost a disputed presidential election in late 2017. EPA-EFE/DANIEL IRUNGU