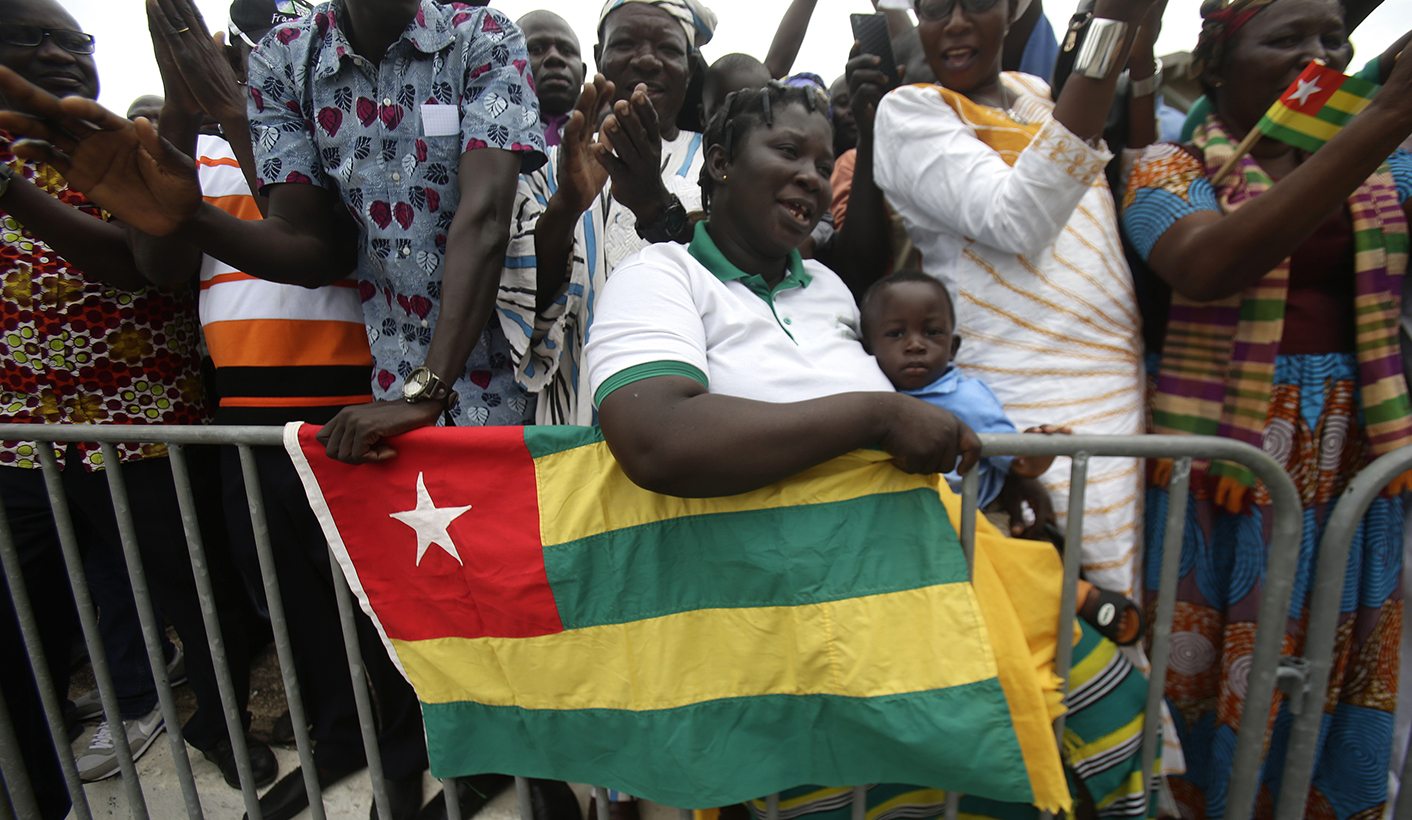 Archive Photo of the Togolese flag, held up in Abidjan. Photo: People stand behind a security barrier with a Togolese flag on it as they greet Togolese President Faure Gnassingbe upon his arrival at the Felix Houphouet Boigny international airport in Abidjan

Dialogue between Togo’s own actors is vital – but the country can’t do it on its own. By Jeannine Ella Abatan and Paulin Maurice Toupane for ISS TODAY.

While Togo’s political and civil society actors agree that political dialogue is vital in order to bring stability to the country, political actors disagree on the dialogue’s nature, format, objectives and prerequisites. African Union (AU) president Alpha Condé proposed 23 and 26 January for the opening of the talks following his 15 and 16 January meeting with the coalition of 14 opposition parties. The dialogue was initially announced by Togo’s President Faure Gnassingbé in November 2017.

The negotiations are seen as vital to end the political crisis plaguing the country since August 2017, but a number of obstacles persist. On the one hand, the 14 opposition parties favour a restricted dialogue with the government under the auspices of the international community. For them, the ultimate objective of the dialogue is to define the conditions for Gnassingbé’s departure and a return to the 1992 constitution.

The governing party on the other hand wants the dialogue to be initiated and led by the government and extended to other political actors. The government’s overall goal is the organisation of a referendum. To recall, the contested referendum bill announced in September 2017 by the government proposes a two-term limitation of the mandate of the country’s president and deputies, and a two-round poll.

However such a dialogue should not revolve exclusively around the establishment of the rules governing the competition for access to and the exercise and control of political power. Such negotiations should also focus on the delineation, in an inclusive way, of reforms that will deepen democracy and the modernisation of the country’s institutions to better respond to the needs of the Togolese people.

In addition to the three proposed amendments in the referendum bill, the Global Political Agreement (Accord politique global or APG), signed in August 2006, provides for further constitutional and institutional reforms necessary to consolidate democracy, the rule of law and good governance in Togo. Eleven years after the signature of the APG these reforms are yet to be implemented.

In the short term, the implementation of electoral reforms is important as Togo begins an electoral cycle in 2018 with the organisation of legislative and local elections. The latter were last organised in 1987. In the medium term, the application of reforms would avoid recurrent electoral tensions in Togo, especially regarding the upcoming presidential election of 2020.

The reluctance of the coalition of 14 opposition parties to participate in the dialogue initiated by the government, manifested in their decision to boycott the preparatory dialogue meeting of 12 December headed by Prime Minister Komi Sélom Klassou, is based on the failure of a series of dialogues organised since the 2006 signing of the APG. But while a lack of political will by the ruling party is partly to blame for the reforms remaining unimplemented for more than 11 years, this failure is also partly due to a counter-productive strategy by the opposition. This was the case during the 2014 Togo Telecom dialogue, which failed because of the lack of consensus among opposition actors on the retroactivity of the limitation of the presidential term.

If the crisis persists, this could exacerbate social tensions and jeopardise the country’s economic prospects. In that regard, dialogue remains the only peaceful way to implement the reforms envisaged – some of which are not taken into account by the referendum bill.

To avoid a stalemate, the dialogue should be led by the Economic Community of West African States (Ecowas) and the AU, two actors already involved in easing tensions in Togo. These two organisations have the capacity to ensure the parties respect their commitments. Even more so, the involvement of external actors is necessary given the degree of mistrust between the Togolese political actors.

The dialogue should lead to the adoption of a consensual reform project on the one hand, and a clear implementation road map on the other. Considering that the upcoming elections are expected soon the adoption by parliament of the draft reform that would result from this dialogue should be considered during the discussions.

However, dialogue can only lead to an effective implementation of the reforms if the political actors involved – both the governing party and the opposition – show the necessary political will to put an end to this crisis. DM

Photo: People stand behind a security barrier with a Togolese flag on it as they greet Togolese President Faure Gnassingbe upon his arrival at the Felix Houphouet Boigny international airport in Abidjan, Ivory Coast 20 November 2017. FEPA-EFE/LEGNAN KOULA