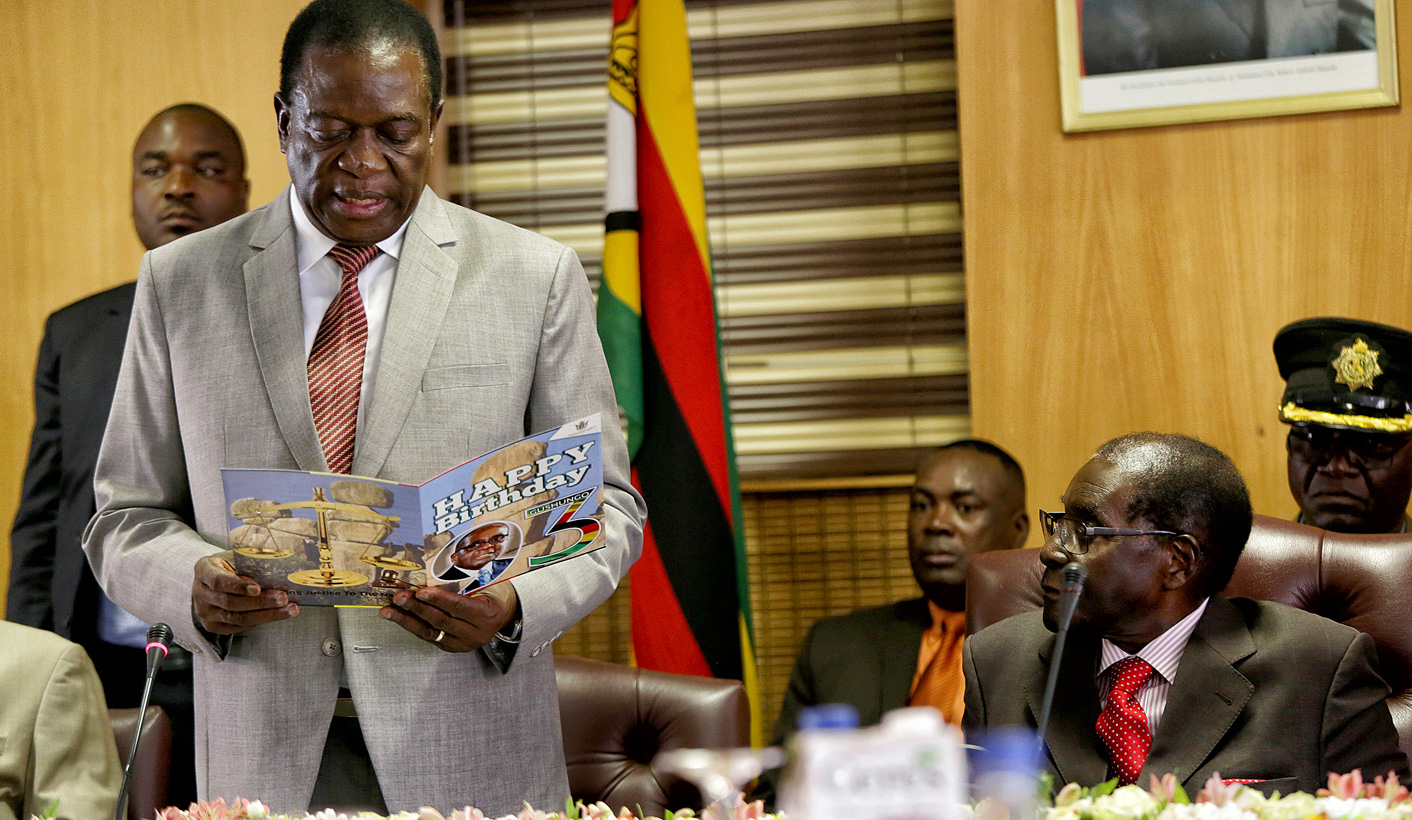 Emmerson Mnangagwa may – or may not – turn out to be Zimbabwe’s saving grace. But that would be a rather peripheral benefit of the military coup (or non-coup) that happened early on Wednesday morning, almost certainly masterminded by Mnangagwa. By PETER FABRICIUS.

The military takeover of power in Zimbabwe may, if handled according to the generals’ script, prove to be that rare thing, a benevolent coup. If the generals merely get rid of the 93-year-old President Robert Mugabe, and, more importantly, his toxic wife Grace (and do so without bloodshed), and then restore rule to the civilians as they have promised, that would be a good thing.

They would then be restoring democracy and constitutionality – not to the country at large but to the ruling party, Zanu-PF. For the last few years, Mugabe, aided and abetted by Grace, has been frustrating the legitimate succession process in Zanu-PF. Two years ago at about this time, Grace Mugabe launched a vicious attack on then vice president Joice Mujuru when she revealed an ambition to succeed Robert Mugabe. Mujuru was hounded out of office and out of the Zanu-PF, creating her own party, which has duly settled into relative obscurity.

That left Mujuru’s then greatest rival, Mnangagwa, as the only pretender to the throne still standing. And so Grace turned her vitriol onto Mnangagwa this year and likewise persuaded her husband to fire him.

But Mnangagwa is made of sterner stuff than Mujuru. It is not for nothing that he is known as “Ngwenya” (“crocodile”). His ruthlessness is legion. And so he didn’t ride off into the sunset to launch yet another opposition party or just retire from politics to make even more money, as many had expected.

He vowed, like General Douglas MacArthur, that he would return, to wrest control from the Mugabes. And inside a week, that’s what he has done. The difference between him and Joice Mujuru is that he had the backing of the military. Mugabe, ever attuned to where the real power lay, must have known, even as he fired Mnangagwa last week at Grace’s behest, that he had this time bitten off more than he could chew.

Where things go from here is hard to say. Both Mnangagwa’s own statement last week and that of Zimbabwe Defence Force chief of staff General Constantine Chiwenga on Monday, when he directly warned Mugabe that the military would “step in” if he didn’t stop purging liberation war veterans, looked forward to next month’s Zanu-PF congress.

They essentially demanded that the ruling party hold a free and fair election of its leader and candidate for the national elections in 2018, instead of going through the usual charade of rubber-stamping Mugabe.

This suggests that Mnangagwa’s game plan is to insist that Mugabe resign as Zanu-PF leader at the conference, allowing him to stand as his successor (and win the election, he likely presumes).

That would allow Robert Mugabe a dignified exit from the party leadership. Would Mnangagwa and the military leaders further extend so much courtesy to the liberation war hero as to allow him to remain de jure national president until next year’s elections?

Many rumours swirling on Wednesday suggest not, as they say Mugabe has already been forced to re-appoint Mnangagwa as vice president, then to step down as national president himself and so allow Mnangagwa to take over immediately in terms of the constitution, pending the Zanu-PF and national elections.

How far Mnangagwa and the military are prepared to go to respect Mugabe – and, perhaps more important, to try to avoid their actions being labelled as a military coup, is hard to say. They have insisted that they have not taken over the government and are merely cleaning out “criminals” – i.e. the members of the rival G40 faction, headed by Grace Mugabe, to Mnangagwa’s Lacoste faction, within Zanu-PF.

But maybe they wanted to get rid of Mugabe immediately, having calculated that leaving him in power even just as a figurehead might be too dangerous, allowing Mugabe the chance to strike back.

If all goes to plan for Mnangagwa, this may turn out well for Zimbabwe. His faction, headed by then finance minister Patrick Chinamasa, was trying to cure the country’s disastrous, cash-strapped economy, mainly by slashing back on public servants’ salaries which constitute the vast percentage of government spending.

But Mugabe simply tossed out such proposals, fearing they would cost him political support. Last month he shifted Chinamasa into an innocuous portfolio, replacing him with Ignatius Chombo, a member of the G40 faction. Chombo was reportedly among the first people to be arrested by the military after it seized power on Wednesday.

But even if the new guard does improve the running of the economy and the government in general – and it could hardly do worse – do not expect a flowering of democracy.

This coup was only about resolving a domestic squabble inside the ruling party. Mnangagwa and Chiwenga, while demanding greater democracy within Zanu-PF, have been at the forefront of denying it to anyone else.

Mnangagwa, who has held just about every portfolio in the cabinet since independence in 1980, was Mugabe’s henchman in the Matabeleland massacre in the early 1980s which effectively snuffed out the rival Zapu party led by Joshua Nkomo.

In 2008, when Mugabe came second to Morgan Tsvangirai of the MDC in the first round of presidential elections, Mnangagwa came to his rescue, mobilising the military to beat MDC supporters into submission, so that Tsvangirai felt obliged to pull out of the second round.

And in the last elections in 2013 he also brought in his military chums to ensure another resounding Zanu-PF victory.

One of the great ironies of Chiwenga’s statement on Monday was that he berated Mugabe for purging liberation war veterans like Mnangagwa and throwing his support instead behind “counter-revolutionaries” – his wife, by implication, included, yet she had not participated in the liberation struggle.

That was essentially the same message Chiwenga had been delivering on the eve of every national election when he and the other military chiefs basically warned they would not take orders from any president who had not fought in the liberation war. Like Tsvangirai.

It was in essence the threat of a coup.

So it is probably safe to assume that if Mnangagwa leads Zanu-PF into next year’s elections, the military will once again be deployed secretly to ensure that neither the MDC or any other political party without liberation war credentials has a chance of victory.

Nonetheless, when it comes to the chronic chaos that is Zimbabwe, we must seek smaller mercies. What happened on Wednesday, it seems, was the transition from a one-man state to a one-party state. Democracy will have to wait. DM