Zimbabwe: Mugabe tells Zuma that he is “confined” to his home, SA envoy en route to Harare 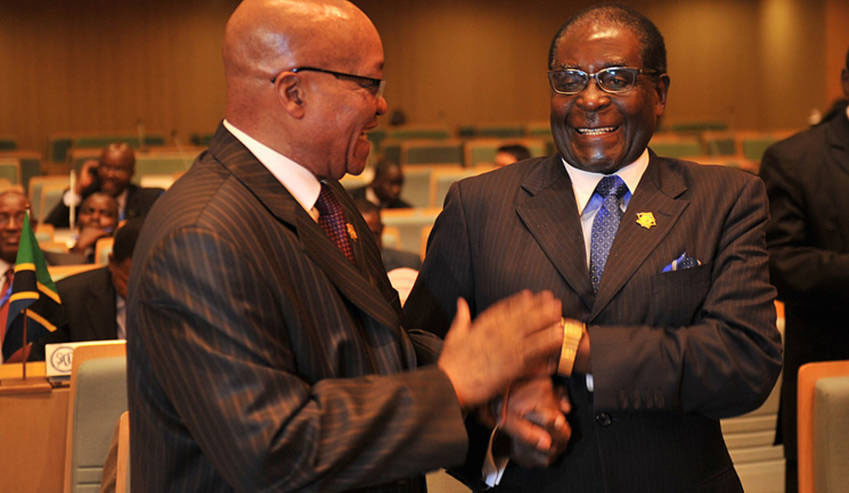 President Jacob Zuma has sent envoys to Zimbabwe to intervene in the military coup – though the coup leaders are not calling it that –  which has effectively toppled President Robert Mugabe. Zuma’s office announced that, in his capacity as Chair of the Southern African Development Community (SADC) he was sending Minister of Defence and Military Veterans, Nosiviwe Mapisa-Nqakula and Minister of State Security Bongani Bongo to Zimbabwe to meet Mugabe and the Zimbabwean Defence Force generals who have seized control of the country. By PETER FABRICIUS.

The two South African envoys would also visit Angola to meet President Joao Lourenco, who is current chairperson of the SADC Organ on Politics, Defence and Security, to brief him on the situation.

Zuma confirmed in his statement reports that the Zimbabwe military had put Mugabe under effective house arrest but was not mistreating him. The statement said: “President Zuma spoke to President Robert Mugabe earlier today who indicated that he was confined to his home but said that he was fine.”

South Africa is also in contact with the Zimbabwean Defence Force (ZDF), the statement indicated.

Zuma also reiterated his earlier “call for calm and restraint and for the ZDF to ensure that peace and stability are not undermined in Zimbabwe.”

It was not clear what South Africa and SADC would try to do in the country and some concerns have been expressed that if they try to reverse the coup and restore Mugabe to full power that could destabilise the situation even further.

The military announced on Zimbabwe Broadcasting Corporation early Wednesday that it had not taken over the government but had intervened only to arrest “criminals” who were destabilising the country and after that the situation would return to “normalcy”.

It was very clear that the military had intervened on behalf of Emmerson Mnangagwa , who Mugabe fired as vice president last week after he had a public clash with First Lady Grace Mugabe. The two of them are leaders of rival factions in the ruling Zanu-PF vying to succeed the 93-year-old Mugabe.

Major-General Sibusiso Moyo the ZDF spokesman, when he announced the de facto coup early Wednesday, gave assurances to Parliament and the Judiciary and the civil service that their positions would not be threatened by the military’s action.

Both Mnangagwa himself and ZDF chief Constantine Chiwenga, in their statements over the last week, had envisaged free and fair elections within Zanu-PF at its leadership congress next month, as the ultimate aim of their abrupt intervention into Zimbabwe’s tumultuous politics.

Analysts believe that the best-case scenario then is that the military has persuaded the 93-year-old Mugabe to stand down as Zanu-PF leader and as national president. The timing could be sometime between now, the Zanu-PF Congress and the national elections due next year.

That would allow a proper election for a successor as party leader next month and that person – probably Mnangagwa – would run as the party’s candidate in next year’s national elections.

It is likely that the military are not calling their intervention a coup as that could trigger suspension of Zimbabwe from both SADC and the African Union – both have firm provisions calling for the suspension of governments of member states which come to power by “unconstitutional means.”

Whether Zuma’s envoys will enforce this provision strictly and insist on the ZDF restoring Mugabe to power is a moot question. Stephanie Wolters, senior researcher at the Institute for Security Studies (ISS) in Pretoria said on Wednesday she was struck by the fact that Zuma – who normally favours the incumbent in such disputes – had not in fact insisted in his two statements on the topic on Wednesday, that Mugabe was the rightful leader of Zimbabwe nor that he should be restored to that position.

She said this suggested that the events in Zimbabwe might in fact be convenient for South Africa in resolving a precarious situation, though she stressed that this depended on the military not undermining democracy in the country by barring elections, for instance.

The ISS called for SADC and AU intervention in the crisis at a seminar today but Wolters stressed that such intervention would have to be carefully calibrated and nuanced to take account of the evolving situation on the ground.

Several embassies were closed on Wednesday except for essential staff. International schools were also closed. European Union ambassadors were to meet at the French embassy to discuss the situation, diplomatic sources said.

Most were hopeful that the military intervention would improve Zimbabwe’s situation, as long as the ZDF stuck to its promise to return power to the civilian authorities promptly. DM