Op-Ed: A mediated conversation would be in Danny Jordaan’s best interest 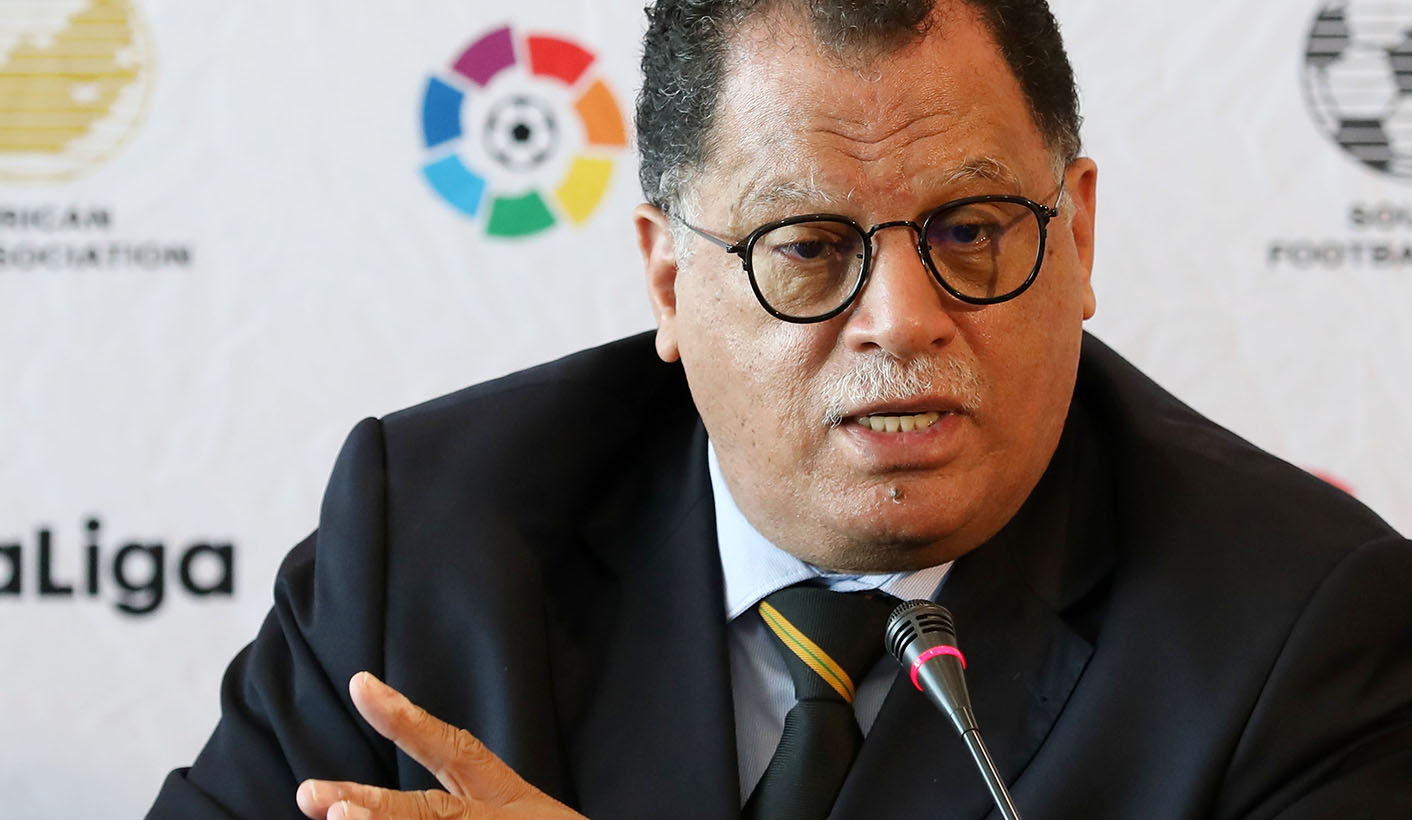 There is a gaping hole between the legal options available to rape and sexual assault survivors and the moral imperative to speak the truth, come what may. By JENNIFER FERGUSON, who has accused soccer boss and politicians Danny Jordaan of raping her 24 years ago.

I have been in silence this last week waiting for a response to our formal outreach for mediation from Danny Jordaan. At this stage I am also speaking on behalf of another victim of Danny’s sexual aggression who has chosen to assume protected identity for her own safety. There is a third victim who has submitted her story of sexual harassment and a fourth, also of harassment, waiting in the wings. And we are sure there are even more who will feel courageous enough to share their painful experiences, under protected identity if necessary.

My initial disclosure of the rape was met with a massive outpouring of support from the cyber-community of men and women from South Africa and other parts of the world. These messages flowed not only from fellow artists, musicians, writers, poets, journalists, activists, NGOs, respected leaders in the field of law, business and otherwise, but also from so many “ordinary” South Africans who are often living very close to the realities of sexual molestation and abuse. The most touching communications have come from men and women who themselves have been victims of rape and sexual assault and who are also trying to heal and find closure. In South Africa, my friend and sister-comrade has courageously shared her story with us. She has chosen to keep her identity protected. We have been held in profound expressions of love and support from our families despite the challenges that often accompany such disclosures. This has been a time of great sorrowing and at the same time, great healing for all of us.

The offer for mediation has been a sincere attempt to provide an opportunity for a dignified process of exchange that would be healing for both parties. Our first option has not been to enter the courts. We know only too well the emotionally and financially draining legal processes that can draw out over years on often mutually destructive paths towards questionable outcomes in the name of “justice”, where neither party emerges victorious.

I have consistently stated that a lengthy legal process would not be my first choice of action. If Danny Jordaan maintains his innocence, then a mediated conversation would have been in his best interest. Despite our pro-active offer for mediation, the only response we have had so far has been from Advocate Mr Norman Arendse, who communicated via a mutual friend of my son’s father, asking him if he would be prepared to discuss me, “off the record”.
This common strategy seeks to discredit and undermine the victim’s integrity as part of a smear campaign. The victim of the rape is shown to have “loose morals”. This tactic is called “slut-shaming”.

For the record I was in a long-term relationship with Ralph’s father and Ralph was a welcomed manifestation of love. Despite the fact that we separated, we have remained close friends over the years. Ralph was not the product of a one-night-stand.

My motives for coming out with the disclosure so long after the event have been examined by many.

All I can truly say is that I have not been ready up till now. My silence has been a form of suffering and shame and I am so grateful to have let go of this burden in my life. It has affected me on so many levels it is beyond comprehension. My journey towards healing this painful experience can now truly begin and I am deeply thankful that somewhere I found the courage to speak the truth. But mostly, I am breathing in the journeys of other women who are also finding the courage within themselves to come forth with their stories of violation. We are helping not only ourselves to heal, but empowering our families, our communities, indeed our country to dare to start conversations that look at this terrible shame-based space of sexually distorted behaviour that is causing so much pain and injury in our communities.

When men that have been entrusted with power and leadership misuse it, using their penises as instruments of rage, as machine guns, on the people they work with, the children they fund, the women having to be in their environment, something needs to be done. We have at the altar of the rape victim the martyrdom of Fezekile Kuzwayo “Khwezi”. Her sacrifice is one of our great motivators.

I, and my sister-comrades are preparing for a course of action, the nature of which I will be disclosing in the near future.

I feel peaceful knowing that according to the stakes of power I have nothing to lose. I have accumulated neither wealth, worldly potion nor power. I have chosen to live a simple life focused mostly on my family, my creativity and my path of healing. I have consistently, throughout my life followed the inner-voice that has led me to take actions which, when they occurred could have been seen to be either naive, or at the worst, foolish. However, with the insight of hindsight, I can always see how I have been guided by a fierce and uncompromising longing for truth even when the terrain seemed unclear and bewildering. The voice has never failed me. And the voice is now calling for me to act.

In the various conversations and counsel I have shared over the last two weeks, there is no doubt that #onenightinPE is part of a huge wave of #metoo that is sweeping not only though South Africa but the whole world. As victims (sic) of rape and sexual assault we find ourselves now at this critical juncture in time, where the need to speak out the truth of sexual violations that have often festered for years hidden in our closets of shame is the non-negotiable terrain opening for our release.

At the same time, we are confronting the gaping hole between the legal options available to victims (sic) of rape and sexual assault and the moral imperative to speak our truth, come what may. We have now been provided a moment in time where the voices of millions of women are making themselves heard. The old frames of law are struggling to meet the current cry of moral outrage that is engulfing the world, and this included the voices of men and boys who have suffered the trauma of rape and abuse. The cycle of sexual abuse, assault and rape knows no colour, no creed, and no gender. It is the women, however, who have precipitated an urgently uncompromising collective moral voice that is rising to speak out, despite the centuries of hidden shame. Theirs is a clarion call for activism and protest in the form of courageous disclosure, for mutually supported protest, and at lase, a long over-haul of a legal system that has not and is still not serving the most vulnerable victims of sexual crimes. Now, once again, it seem, we are being called to take up the sword of what one could call a righteous activism again.

I am grateful to have my husband Anders Nyberg at my side, as are my two beautiful sons Ralph and Gabriel, and Johanna, our daughter born with an extra chromosome.

I am being sustained and supported by a powerful community of friends and supporters from various fields who are giving of their time, their resources and expertise in order to help this wave gain momentum. This cannot be my struggle alone. Patriarchal culture of and systemic corruption in SA is of such concern that the #metoo “one night in PE” seems but a tiny eruption on the surface of a much bigger threat that is undermining the very heart of democratic rights and freedom so many fought and died for, and that so many seem to be giving up on in our beloved but troubled country.

May this small battle be part of the transformation of the toxic into the a healing tonic that we are all so desperately in need of. DM

Jennifer Ferguson is a musician and former ANC MP.

Update: Danny Jordaan issued a statement through his lawyer yesterday, denying the rape allegations. “In light of the scourge of gender-based violence in this country and Dr Jordaan’s sensitivity toward the issue he had to consider carefully his response, if any, in public to the allegations made by Ms Ferguson.

“Dr Jordaan’s perceived silence in the face of such serious allegations is because of his empathy with the victims of gender-based violence. Dr Jordaan has, however, after careful consideration decided to assert his innocence. Whilst Dr Jordaan supports public debate as an essential tool to highlight the issue of gender-based violence, however, in this case there are two opposing versions that cannot be resolved in the media, or elsewhere, in substitution for a court of law. Mediation, as suggested by Ms Ferguson, runs the risk that the public will perceive that there is a cover-up away from the glare of public scrutiny; and that there is one law for the powerful and another for the masses.

“We have accordingly, as his attorneys, advised Dr Jordaan that he must not participate in a public discourse of the allegation made against him by Ms Ferguson.”

He said from a legal viewpoint, “serious allegations of the kind made by Ms Ferguson can only be ventilated in a court of law, where the rights of all parties are protected”. See News24 here.

Speaking to Daily Maverick from Sweden today, Ferguson said that Jordaan’s dismissal of her attempts at mediation was a “condescending insult”. “It is a joke that he said he was against it as it would be behind closed doors,” she said. “We could always open the mediation to the public.

“If mediation attempts fail, we will look at other options – including civil action.” Ferguson said her position remained unchanged. DM

We have all become scriptwriters in the social media theatre of life, but someone else is directing the play

While Prasa continues to sink, the Western Cape seeks control of its rail systems