Theatre Review: Evita sprawls across the stage, with relevance to our own plight 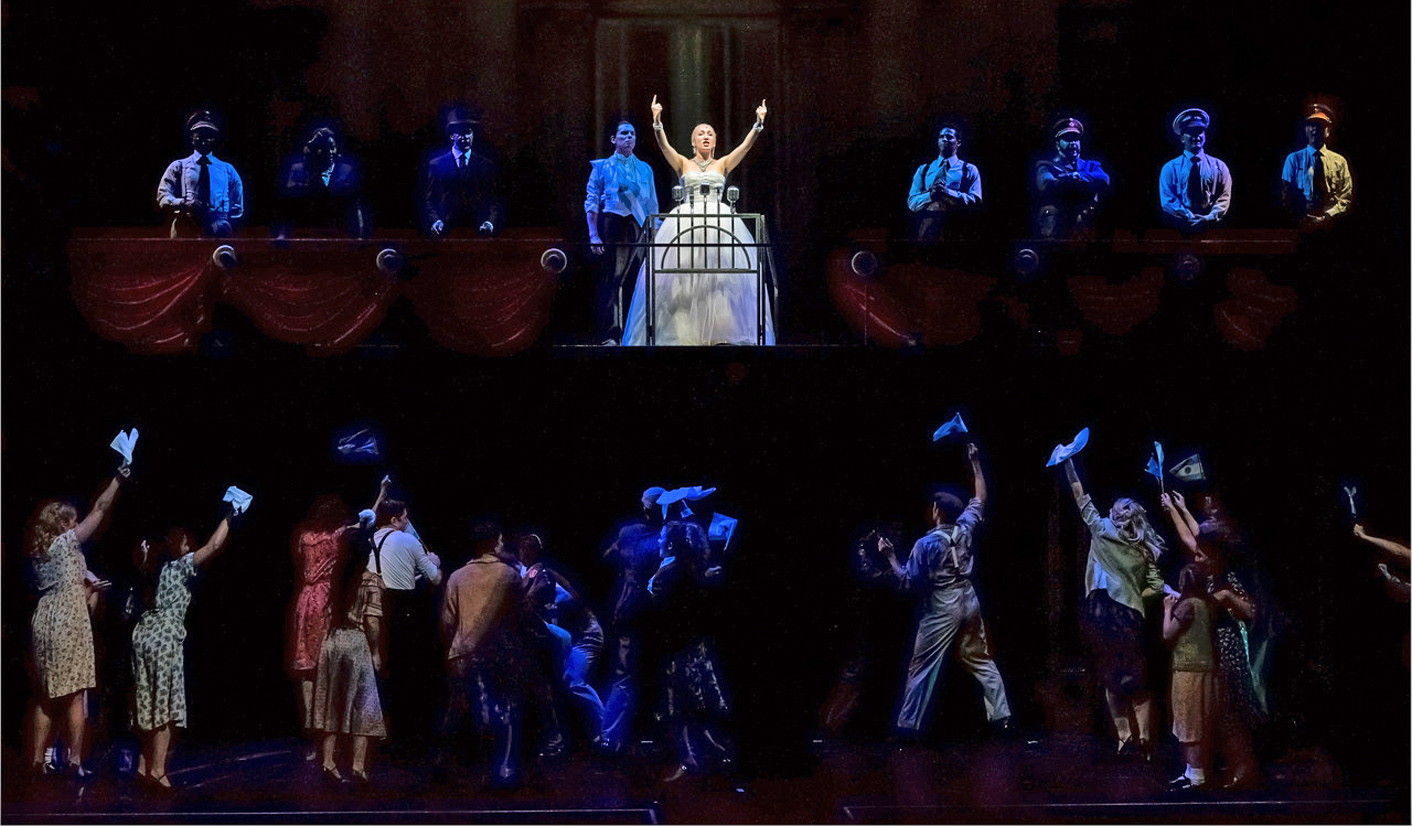 It’s been seven years since Evita last played in Johannesburg, and that was a bonsai production pared down to fit a smaller stage. Now a full-blown version is sprawling across the giant stage of the Teatro at Montecasino, with a live orchestra, a massive screen projecting historical film clips, and plenty of space for Argentina’s military juntas to drill. By LESLEY STONES.

This musical by Tim Rice and Andrew Lloyd Webber has become a theatrical stalwart, packed with a higher-than-average number of memorable songs that spawned several hit singles. A great event, in other words, with a strong story, excellent music, some seductive tango moves to sex it up, and the tragi-scary figure of Evita championing the common people while sleeping her way to power. Plus all the political twists and backstabbing and hands dipping into the coffers that goes with such fame and fortune.

One of the most powerful elements of this production is the huge projection screen running fascinating film reels and photographs from the time of Argentina’s developing dictatorship. They show the troops and the people, and most of all the radiant, shiny, genuine Eva, the actress who rose to power on the arm of President Juan Perón.

These old clips are mesmerising, and the look and feel recreated on the stage in front is excellent. The costumes are superb and plentiful, and the stage set includes beds that quickly come and go, much like Evita’s lovers.

The politics of the story are uppermost, and much appreciated by a South African audience suffering shenanigans of our own. We laugh at the primped and preening polo society ladies and gents who form a chorus of disapproval on one side, and the neatly goose-stepping solders who also frown down on Evita. It’s stirring stuff at times, with banners waving, torch flames flickering and an ensemble delivering some gorgeously harmonious vocals.

If it feels like this is all leading up to a “but”, that’s because it is. For me, Emma Kingston as Eva isn’t a great success. She certainly brings the common-voiced, working-class image that’s the nub of the whole story, and she acts the part well. But when she sings those glorious songs that her role is blessed with, I yearn for a richer, fuller sound than these strident vocals. She can belt it out, but it strips the polish off the magnetic aura I’d expected.

Jonathan Roxmouth steps in to fill that musical anticlimax with his own lush voice as Che, the guerilla-clad revolutionary who guides us through the show. He’s perfect as the cynical commentator who scorns the upper class and political self-aggrandisement, and shows his contempt through clever songs like Oh, What a Circus and even his disdainful eyebrows.

Robert Finlayson as Perón seems to lack the degree of confidence and thrust it would help a dictator to have, and while he does convey “perplexed” very well, that allows his part to be overshadowed by the other characters.

One of the most memorable scenes is the brief appearance of Isabella Jane as Perón’s mistress, before she’s summarily evicted by Evita. When Jane sings the heartbreaking Another Suitcase in Another Hall, the class – in the sense of spine-tingling singing – is restored.